1.Management of complex fracture dislocation around the Hip joint.

2.Surgical approach and tips on planning such complex injuries.

Introduction: Posterior dislocation of the hip joint with associated acetabular  and intertrochanteric fracture is a complex injury. Early recognition, prompt and stable reduction is needed of successful outcome.

Case Report: 45 year old male patient presented with posterior dislocation of the hip with transverse fracture with posterior wall fracture of acetabulam and intertrochanteric fracture on the ipsilateral side. The complex fracture geometry was confirmed by CT scan. The patient was successfully managed by open reduction and internal fixation of intertrochanteric fracture was achieved with dynamic hip screw (DHS) plate fixation followed by fixation of acetabular fracture with reconstruction plate.

Conclusion: Hip dislocation combined with acetabular fracture is an uncommon injury; this article presents a unique case of posterior wall and transverse fractures of ipsilateral acetabulum with intertrochanteric fracture in a patient who sustained traumatic posterior hip dislocation. Early surgical intervention is important for satisfactory outcomes of such complex fracture-dislocation injuries.

Posterior dislocation of the hip joint with associated acetabular fracture is an uncommon injury. Early recognition, prompt and stable reduction is the essence of successful management. A delay in diagnosis and reduction leads to preventable complications and morbidity.  Final outcome depends upon the time elapsed from injury to treatment, type of fracture-dislocation, congruity and stability of the reduction and severity of injury[1, 2]. Posterior hip dislocations occur in axial force transfer through the femur to the hip joint in adduction at hip. According to varying position of the hip from extension to flexion (in adduction) leads to fracture of the wall of acetabulum or column fracture. There are case reports documenting dislocation of hip with column or wall fractures of acetabulum, with neck or intertrochanteric fracture [3,4]. The combination of posterior dislocation of hip with trochanteric fracture of femur, with fracture of posterior wall of acetabulum and transverse fracture acetabulum has not been reported in literature till date. We hereby present a case with above combination with sciatic nerve palsy. There was also ipsilateral anterior dislocation shoulder.

Forty five year old man had sustained a fall from moving train. After primary stabilization of patient as per ATLS (advance trauma life support) protocol, trauma series radiographs were obtained. Fracture geometry was defined by CT scan which showed posterior dislocation of the hip with transverse fracture with posterior wall fracture of acetabulum and intertrochanteric fracture on the ipsilateral side (Fig. 1A-D). There was also ipsilateral dislocation of shoulder in this patient (Fig. 2). He also had foot drop on ipsilateral side. He was taken up for surgery in lateral position. Surgical exposure was done by standard Kocher–Langenback approach. On exposure short external rotators and posterior capsules were found torn with ragged margins. The sciatic nerve was found stretched over dislocated head but intact. The trochanteric fracture site was used to pass guide wires in the head of femur, then the trochanteric fracture was reduced under vision and wires were passed in retrograde fashion from head through trochanteric fracture. Head was found vascular on drilling. Stable fixation of intertrochanteric fracture was achieved with dynamic hip screw (DHS) plate fixation supplemented with derotation screw (Fig. 3). Then the fracture geometry of pelvis and acetabulum was defined. The floor of acetabulum was cleared of debris and relocation of hip was done. The distal part of hemipelvis was found displaced medially and was pulled out laterally through direct traction on a screw placed in posterior column as jockey and with use of tongs. The postero-superior wall fragment was displaced superiorly and was pulled down with AO type towel clip. Provisional fixation of wall and column were done with k wires. Definitive fixation was achieved with molded eight hole reconstruction plate on posterior column and two partially threaded cancellous screws were used for wall fracture fixation additionally (Fig. 4). The hip was stable after fixation. In the postoperative period, in bed physiotherapy was started after 1 day. Patient could be mobilized with support of a walker after one month because of shoulder dislocation. The radiograph at 6 months shows evidence of fracture union (Fig 5).

Early surgery in such cases will optimize outcome in terms of a congruent hip, reducing chance of AVN. The surgical approach is dictated by the dislocation (anterior or posterior) in such cases.

Dear Reader, We are very excited about New Features in JOCR. Please do let us know what you think  by Clicking on the Sliding “Feedback Form” button on the  < << left of the page or sending a mail to us at editor.jocr@gmail.com

How to Write a Case Report for Journal of Orthopaedic Case Reports– What do Editor and Reviewer wa... 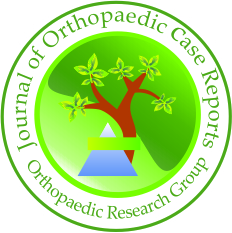