2. Anatomical and Clinical review of such presentation?

Introduction: Superficial palmar arch (SPA) is dominant vascular structure in palm of hand. In present study we described a case of Ulnar / Radiopalmar pattern of incomplete SPA in an Iranian cadaver. When the SPA is complete, the superficial palmer branches of the radial artery contribute to the ulnar artery. In incomplete type of SPA, there was no anastomosis between the ulnar and radial arteries (UA, RA).

Conclusion: Knowledge of anatomical variation of SPA is important for the hand surgical interventions and this is a very rare variation which can be easily tested clinically by Allen’s test.

Superficial palmar arch (SPA) as a dominant vascular structure supplies a majority of the muscles of the palm of the hand. The arch is localized between the palmer aponeurosis and the long flexor tendons [1]. When the SPA is complete, the superficial palmer branches of the radial artery contribute to the ulnar artery. In incomplete type of SPA, there is no anastomosis between the ulnar and radial arteries (UA, RA) [2]. Various variations in the SPA have been studied by several authors. According to Coleman and Anson (1961), the incomplete type of SPA is categorized into four subtypes based on the absence of a communication or anastomosis between the radial, median and the ulnar arteries [3]. Although several studies have reported on various aspects of the SPA form several countries, to our knowledge, no study has attempted to report anatomical variation of SPA from Iran. In addition, road traffic injuries rate in Iran is the highest of any country in the world for which reliable estimates are available [4] that need to surgical intervention. Awareness and identification of the SPA variation in the hands is critical for orthopaedicians and microvascular surgeons performing advanced surgical procedures such as arterial repairs, vascular graft applications. Therefore we report a case of incomplete type of SPA in an Iranian cadaver that is the first report of this variation.

After proper skin incision and dissection of flexor retinaculum, palmar aponeurosis and deep fascia covering the thenar and hypothenar muscles, we encountered an incomplete type of SPA in the left upper extremity of a formalin-fixed adult male cadaver during routine dissection. The history of the individual and the cause of death was not known. In the present case, the brachial artery divided into RA and UA at the cubital fossa. There was no anastomosis between RA and UA at palm of hand and SPA was incomplete. UA gave three palmar digital arteries; proper palmar digital artery and two common palmar digital arteries which passed to the medial three interdigital clefts. RA gave two branches: proper palmar digital artery to the radial side of the index finger and an arteria princeps pollicis (Fig. 1).

A classic morphology of complete SPA is formed by the linkage between superficial palmar branches of the radial and ulnar arteries. But other morphology of incomplete SPA was reported. The incidence of the incomplete SPA reported 10%, 16%, 16% and 21.47% of cases in studies of Loukas, et al. (2005), Patnaik, et al. (2002), Al-turk and Metcalf. (1984) and Coleman and Anson (1961), respectively. Most of the SPA arches (54.76%), in the study of Sarkar et al. (2012) were incomplete [3, 5-8]. According to Ottone, et al. (2010) the present case is Ulnar / Radiopalmar pattern subtype of incomplete SPA (9). The incidence of this variation reported in 8.3%, 3.2% and 3.6% of cases in studies of Ottone, et al. (2010), Coleman and Anson (1961) and Ikeda et al. (1988) [9,3,10]. There was no report of the incomplete SPA, especially Ulnar / Radiopalmar pattern from Iranian population; and we believe that this is first report from our geopolitical area. Clinically the anastomosis between radial and ulnar arteries in hand is of great significance when performing surgical procedures on hand, forearm or on individual arteries. One of the complications of common procedure of radial artery like arterial blood sampling is occlusion of the artery, however in these situations the hand perfusion can be maintained by the ulnar artery through the palmar arch. This can be easily established by using Allen’s test [11] or Doppler ultrasound studies [12] which can provide good idea about the continuity of the palmar arches. In cases of incomplete palmar arch, as in this case, the Allen’s test will be negative confirmed with and both radius and ulna arteries will behave as ‘end arteries’. Thus any procedure on radial or ulnar artery needs to be carefully planned and potential of ischemic complications should be kept in mind.

In viewof high rate of road traffic injuries in Iran and need for surgical intervention, the anatomic knowledge of the SPA variability as a dominant vascular structure of palm becomes essential. 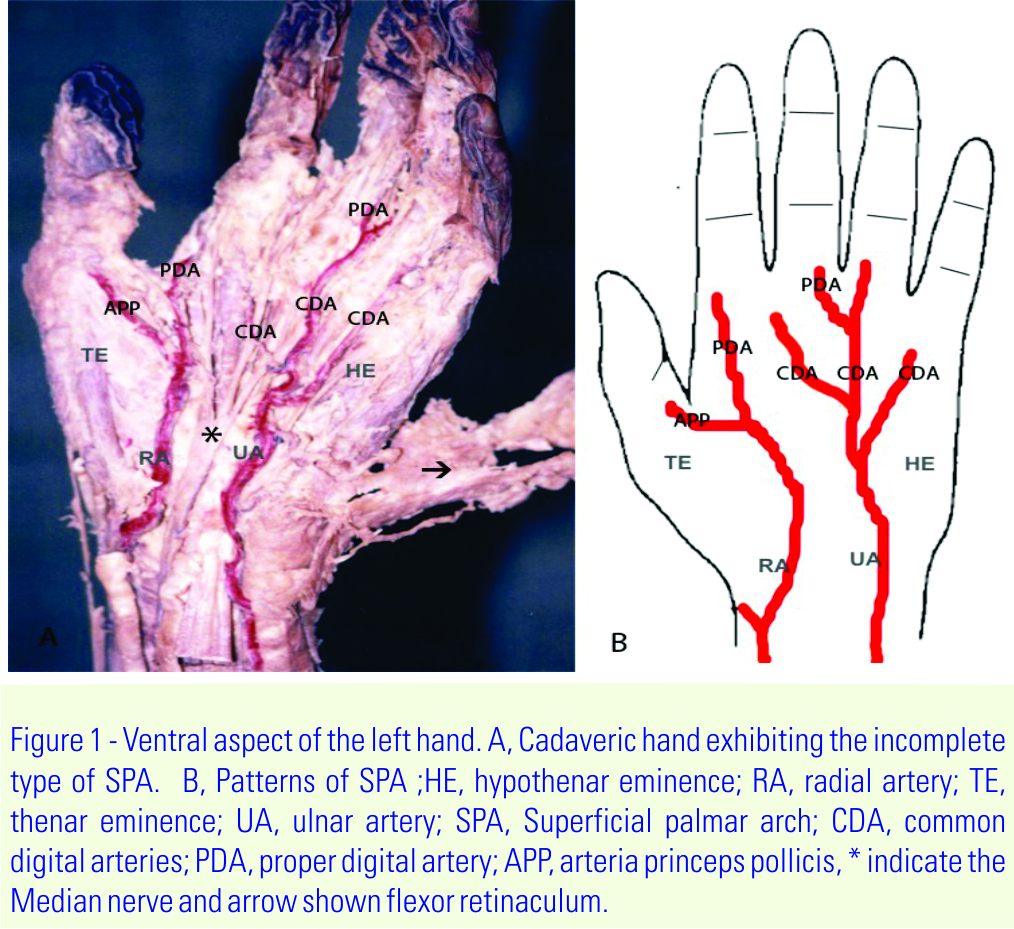