Chondroblastoma of Diaphysis of Radius in a Seven Year Old Child

Unusual Presentation of Chondroblastoma with Management.

Introduction: Chondroblastoma is a rare , benign tumor derived from chondroblasts, is almost exclusively an epiphyseal lesion, although it may secondarily extend into metaphysis. It is most commonly found in lower extremity with most common sites being distal femur followed by proximal  femur, proximal humerus and proximal tibia. It is the purpose of the report to describe chondroblastoma in a seven year old child in the diaphyseal area of radius which is a rare entity & frequently presents as diagnostic dilemma.

Case Report: The authors report a case of chondroblastoma involving the diaphyseal area of radius in a seven year old female child. She presented with pain and swelling around the left distal third forearm for eight months . Wide excision of tumor was performed  and the defect was bridged with avascular fibular auto graft , secured to host bone with k-wires and dynamic compression plate to achieve osteosynthesis.

Conclusion: Pure metaphyseal and/or diaphyseal chondroblastomas are exceedingly rare. A presumptive diagnosis may be considered in the appropriate age group in the presence of chondroid matrix, perilesional edema, periosteal reaction, and marginal sclerosis. Regardless of all the diagnostic possibilities biopsy may still be required. However, knowledge of this entity will help make the final diagnosis and guide the correct treatment .

Chondroblastoma referred to as codman’s tumor[1], is a rare benign tumor derived from chondroblasts. It is found in epiphysis of long bones, usually before closure of physis of lower extremity [1]. The tumor has a higher incidence in males than females (3:2) and the mean age of presentation is approximately 20years [1]. The tumor presents in a child, teenager or young adult with pain and swelling around joint, usually, the shoulder, knee or around hip. Occasionally, tumor can occur in spine causing back pain. Less common location of tumors include bones of foot, scapula, patella, radius and fibula[1,2]. There can be functional impairment and growth disturbances as tumor is usually localized near a joint or growth place. There is also a high rate of recurrence. Metastasis of histologically benign chondroblastoma is rare [9]. The suggested treatment for aggressive chondroblastoma ranges from simple curettage to wide resection with structural reconstruction [10]. We present a case of chondroblastoma of diaphysis of radius in a seven year old female child which was treated with wide excision and autologous bone grafting with a good outcome at end of 2 year of follow up.

a) Clinical Presentation: A seven year old girl presented with pain in left distal third forearm for 8 months which was gradual in onset, non-progressive, mild in nature and non-activity related. Pain was associated with swelling which was initially small & gradually progressed over a period of eight months. There was no history of trauma/ fever/weight loss or involvement of other bones. The general examination was unremarkable. Local examination of left forearm revealed a fusiform swelling in diaphyseal area measuring approximately 5cms by 2cms. Skin over swelling was normal, no engorged veins were present over the swelling . There was no local rise of temperature but local tenderness was present . Swelling was hard in consistency with well-defined margins, continuous with the radius. Forearm pronation and supination was painfully restricted; finger movements were normal and pain free. There was no associated distal neurovascular deficit. Fig 1- Pre-operative X-ray and Fig 2- Pre-operative MRI b) Surgical Management: Initially, true cut biopsy was done in operation theater under strict asepsis under image guidance to confirm the diagnosis. Tissue histopathology revealed – sheets of polyhedral to oval cells with vesicular nuclei, some showing nuclear grooves and admixed with multinucleated giant cells. The sheets of cells being interrupted by islands of cartilage. No foci of calcification seen. Areas of hemorrhage are seen scattered throughout the tumor. Impression was benign cartilaginous tumor – Chondroblastoma / Chondromyxoid fibroma of radius. The patient was scheduled for surgery after ten days. With a standard volar approach (Henry’s approach) – tumor bearing portion of radius along with the healthy bone was excised measuring to a length of 5cm. Tumor mass was firm, brownish red in color. An autologous avascular ipsilateral fibular autograft was taken and secured proximally to the diaphysis with a dynamic compression plate and distally to the metaphysis with two crossed k wires. Wound was closed in layers after ensuring hemostasis. Histopathologically, the findings were consistent with trucut biopsy findings as mentioned before. Grossly, the tumor mass was seen to press on the cortical bone which showed thinning. However no extension into soft tissue was seen. The distal margin of excision was found to be free (Fig 3) c)Post-operative period and follow up: Immediate postoperative period was uneventful. Patient was discharged on second postoperative day two after drain removal. (Fig 4). The patient was immobilized in below elbow cast for ten weeks. K wires were removed at the end of eight weeks. At twelfth week of follow up patient had developed stress fracture of the graft distal to the Dynamic compression plate. (Fig 5) This was treated with a below elbow cast for a period of twelve weeks. The patient was immobilized with a below elbow splint for a period of three months. At two years of follow up there is full functional recovery and radiograph shows incorporation and hypertrophy of fibular graft (Fig 6,7)

The term benign ‘chondroblastoma’ was proposed by Jaffe and Lichtenstein [7] in 1942 to describe this rare benign, and distinctive tumor composed of immature chondroblasts with scanty chondroid matrix. The suffix ‘blastoma’ reflects a presumed relationship to primitive ‘blastic’ elements and dysontogenetic character[2,8] . Chondroblastoma represents 1% of all benign tumors [12]. According to WHO 2002 definition, “Chondroblastoma is a benign , cartilage producing neoplasm usually arising in the epiphysis of skeletally immature patients.” Chondroblastomas usually arise from a secondary ossification center which is a unique location for primary bone tumors. Sixty percent of chondroblastomas cross the growth plate to extend into the metaphysis [14]. Most of the reported cases of this uncommon tumor were between 10 to 17 years of age. Cases in which patient is less than 10 or more than 25 are uncommon (Jaffe,1957); our patient is a seven year old child. The four major series [7] of chondroblastoma include 258 cases of which only five were in metaphysis of long bones. Two other metaphyseal lesions were recorded in smaller group of chondroblastomas reported by Sherman and Uzel [11]; and by Salzer and associates. The bones often involved by epiphyseal chondroblastomas are femur, tibia and humerus. Therefore, except for humerus, the distribution of metaphyseal tumors roughly parallels commonest location of epiphyseal chondroblastomas [5]. Chondroblastoma in growing children is most frequently located in proximal part of tibia and proximal femoral epiphysis [15].The radiographic appearance is usually suggestive of the diagnosis. The lesion is usually seen as an oval intramedullary tumour with distinct margins. A key diagnostic feature is its almost invariable location within an epiphysis or an apophysis. Other common features are expansion, sclerotic rim, and matrix calcification. Penetration through the cortex into the soft tissues is seen only in a small percentage of cases [16]. Chondroblastoma is generally benign, shows slow pattern of growth with well-defined margins, but its clinical outcomes are unpredictable as aggressive behavior with local recurrence and lung metastasis have been reported [6]. Functional outcomes of surgical treatment of chondroblastoma are generally good, provided the tumor is not discovered very late and that the tumor does not recur. The risk of recurrence appears to be highest for lesions located only in the epiphysis, as opposed to lesions in the apophysis or those that extend into the metaphysis or diaphysis. [18] The recurrence rate ranges from 10% to 35% after curettage and reconstruction with bone graft or polymethylmethaacrylate cement [17]. Factors contributing to recurrence are debatable among studies; more recent reports include: young age, aneurysmal bone cyst components, aggressiveness, anatomic site and inadequate surgery [13].

This case is being reported because of its unusual age of presentation in a female child in the diaphysis of radius. Good functional outcome can be obtained by wide excision and autologous avascular fibular grafting. However it is prudent to immobilize these patients till there is consolidation and incorporation of graft to prevent stress fractures especially when plate fixation is being used.

RELATED POSTS
An Intramuscular Chondrolipoma of the Scapula: A Case Report of a Rare Tumor in an Unusual Location... 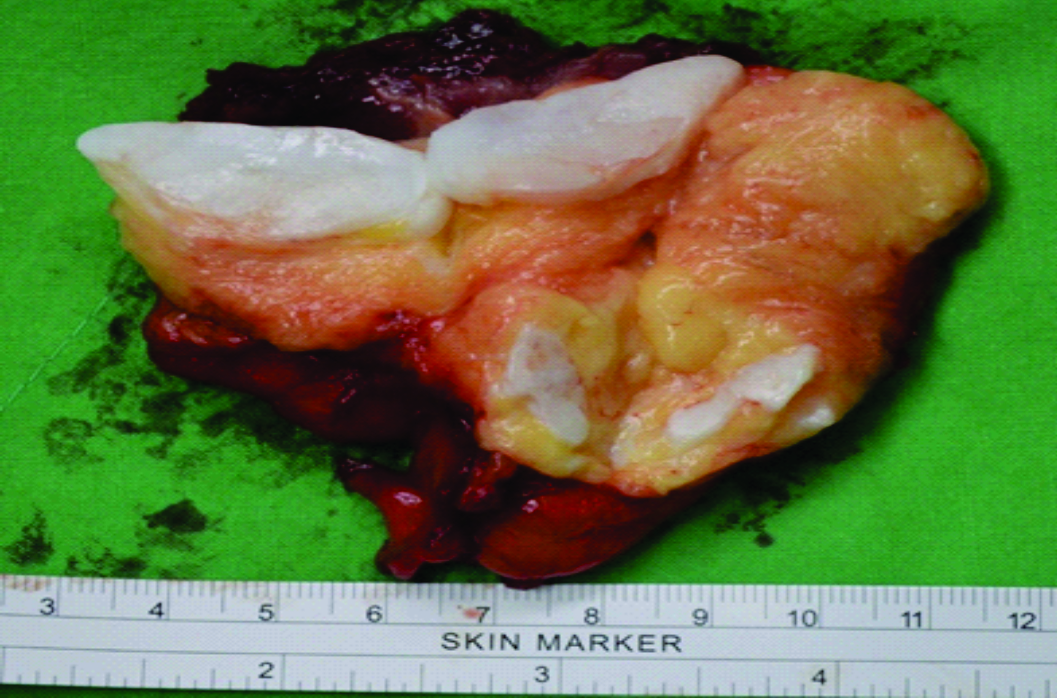 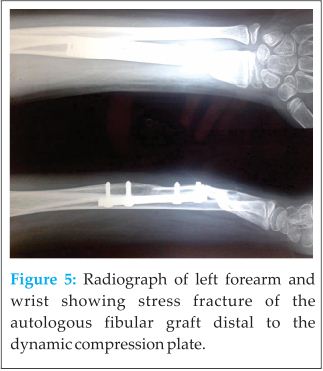