Chronic Tendonopathy as a Unique Cause of Non Traumatic Triceps Tendon Rupture in a (Risk Factors Free) Bodybuilder: A Case Report

Introduction: Distal triceps tendon rupture is an uncommon lesion rarely due to a non–traumatic mechanism. In these cases, the majority of patients show predisposing factors for tendon degeneration: underlying medical co-morbidities, previous systemic and locally injected corticosteroids and systemic anabolic steroids. A clear evidence for an etiopathogenetic role for chronic tendonopathy in triceps tendon rupture is still lacking.

Case Report: We report the case of a rare non-traumatic complete rupture of the triceps tendon, at the olecranon insertion, occurring in a healthy male middle-aged non-professional bodybuilder. He presented to our attention with a five days history of weakness, swelling and pain at the left elbow, started after a snapping sound during a single arm triceps extension exercise. He was a healthy sportsman, no smoker and no drinker. He had suffered, in the two months before, of mild bilateral exercise-related elbow discomfort, never limiting his sport and daily activities. The man was treated by an early surgical repair. Histological analysis was conducted on intraoperative samples. The treatment allowed complete remission and return to sport practice without functional deficit.

Conclusion: An overload-related chronic tendonopathy was identified as the unique factor with causal role in the determinism of the above described lesion. This case highlights, for the first time in literature, that just a chronic tendonopathy, in absence of any other predisposing condition, can lead to a non-traumatic complete triceps tendon rupture.

Triceps tendon rupture is a very rare lesion. Diagnosis is often complicated, delayed or completely missed [1,2,3]. The most common mechanism of injury is a fall or a direct blow to the posterior aspect of the elbow [2,4]. Few cases are described of non traumatic complete triceps tendon rupture, and most of them presented with underlying medical comorbidities known to determine pathologic changes and finally weaken the tendon structure: rheumatoid arthritis, systemic lupus erythematosus, chronic renal failure, hyperparathyroidism [5], xanthoma, hemangioendothelioma, diabetes mellitus [6]. Systemic and locally injected corticosteroids, as well as systemic anabolic steroids, are broadly accepted to have a causal role in tendon degeneration, and to be a contributory cause in tendon rupture, especially in otherwise healthy sportive people [7,8,9,10]. Because of a limited number of reported cases of such lesion, and the frequent contemporary presence of known predisposing conditions, a clear evidence for an etiopathogenetic role for chronic tendonopathy in triceps tendon rupture is still lacking [8,10].

A 52-year-old businessman and enthusiastic bodybuilder since the age of 25 presented to our attention with a five days history of weakness, swelling and pain at the left elbow. He referred of a sudden origin of the symptoms, associated with a snapping sound in the posterior aspect of the elbow, during a single arm triceps extension exercise. There were no systemic disorders at present, or in the medical history of the patient. He was a healthy sportsman, no smoker and no drinker. He did never sustain any pharmacological treatment till now, with particular respect to systemic and local corticosteroids and anabolic steroids. For approximately two months upon presentation, the patient had suffered for mild bilateral exercise-related elbow discomfort, never limiting his sport activity.
At the time of hospitalization, blood tests resulted normal, as well as electrocardiographic analysis, arterial pressure and general physical parameters.
Examination revealed a swelling of moderate degree in the posterior aspect of the elbow, with a palpable defect just upon the triceps tendon olecranic insertion site. No ecchymosis was present. The patient had no limitation in elbow flexion, but showed an extension lag of approximately 25 degrees. Resistive extension was impossible and painful. Strength testing of the injured triceps was 2/5 with respect to contralateral side. X-rays showed a small bony cortical avulsion of the posterior olecranon (Fig. 1a). Ultrasounds and Magnetic Resonance imaging both confirmed the complete triceps rupture at the tendo-osseous junction (Fig. 1b). 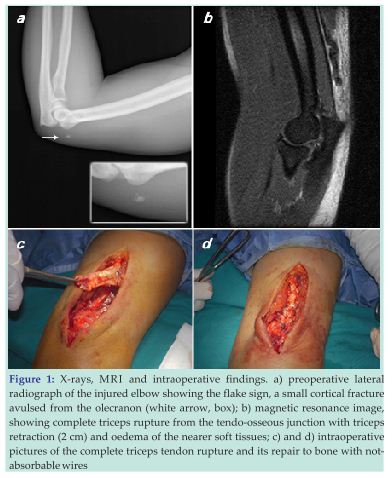 Surgical exploration revealed a complete rupture of the triceps tendon distal insertion, with avulsion of a small flack of cortical bone and partial conservation of lateral expansions to the forearm fascia (Fig. 1c). Triceps tendon showed altered color and consistence suggesting chronic tendonopathy. After surgical debridement triceps tendon was reinserted on the posterior aspect of the olecranon (Fig. 1d). We used non-absorbable Krakow-like sutures (Ethibond No.2, Ethicon, Sommerville, NJ), and these were brought through two holes drilled in the olecranon, from proximal to distal. A third hole was drilled transversely into the olecranon, to pass a further wire used for cerclage. The arm was held in approximately 40 degrees of flexion for tensioning.
Histological analysis was conducted on intraoperative samples. It reported fibrous connective tissue with sclerohyalinosis, chronic microtraumatism-attributable chondrocalcinosis-like degeneration, mixoid degeneration and chronic inflammation foci with neoangiogenesis (Fig. 2a-d). 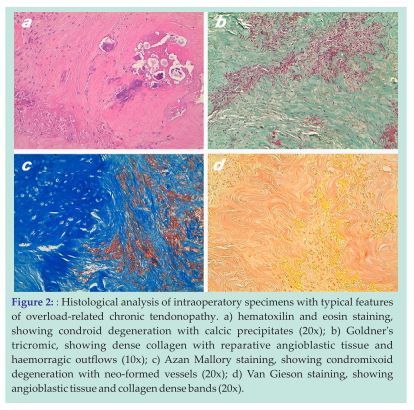 At discharge from the hospital, the day following surgery, the arm was immobilized in a long articulated splint, blocked at 30 degrees of flexion. One week after surgery, a weight free range of motion of 15-45 degrees was allowed. Complete extension was allowed from the second week after surgery. Flexion was increased of 15 degrees every week. After reaching 90 degrees, free flexion was allowed. One month after surgery the patient began physical therapy with isokinetic exercises and at two months he already showed a near complete functional recovery. No complications were reported during the entire 24 months follow up period.

Triceps tendon rupture is an uncommon tendon injury. Despite acute trauma represents the main etiological mechanism, several reports in the literature describe cases of non-traumatic ruptures, often in bodybuilders and weightlifters, often associated with multiple known risk factors for tendon degeneration. The case described in this work lead us to confirm that the bodybuilders and weightlifters category represent per se an at risk category for this kind of lesion. Furthermore, we reported a case of non traumatic complete triceps tendon rupture at the level of the tendo-osseous junction in an otherwise healthy patient, free of any of the known risk factors. The underlying overload-related chronic tendonopathy was identified as the unique cause the lesion is attributable to. The overall relevance of the here presented case relies in the fact that, for the first time, we describe in scientific literature as just a chronic tendonopathy, in absence of any other predisposing condition, can lead to non-traumatic complete triceps tendon rupture.

Triceps tendon rupture is a rare injury, often misdiagnosed or diagnosed with delay. Overload-related chronic tendonopathy could represent a causal factor for this kind of lesion, also in a patient free of any of the known risk factors for tendon injury. This condition should be carefully identified and adequately treated in order to low the risk of spontaneous tendon subcutaneous rupture.

RELATED POSTS
Death of an Extensor Pollicis Longus due to a Funeral... 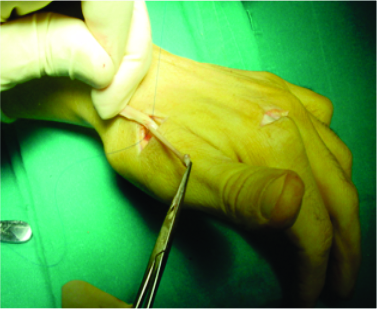 Dupuytren’s disease and needle aponeurotomy: rupture of a deep common flexor tendon: A case re... 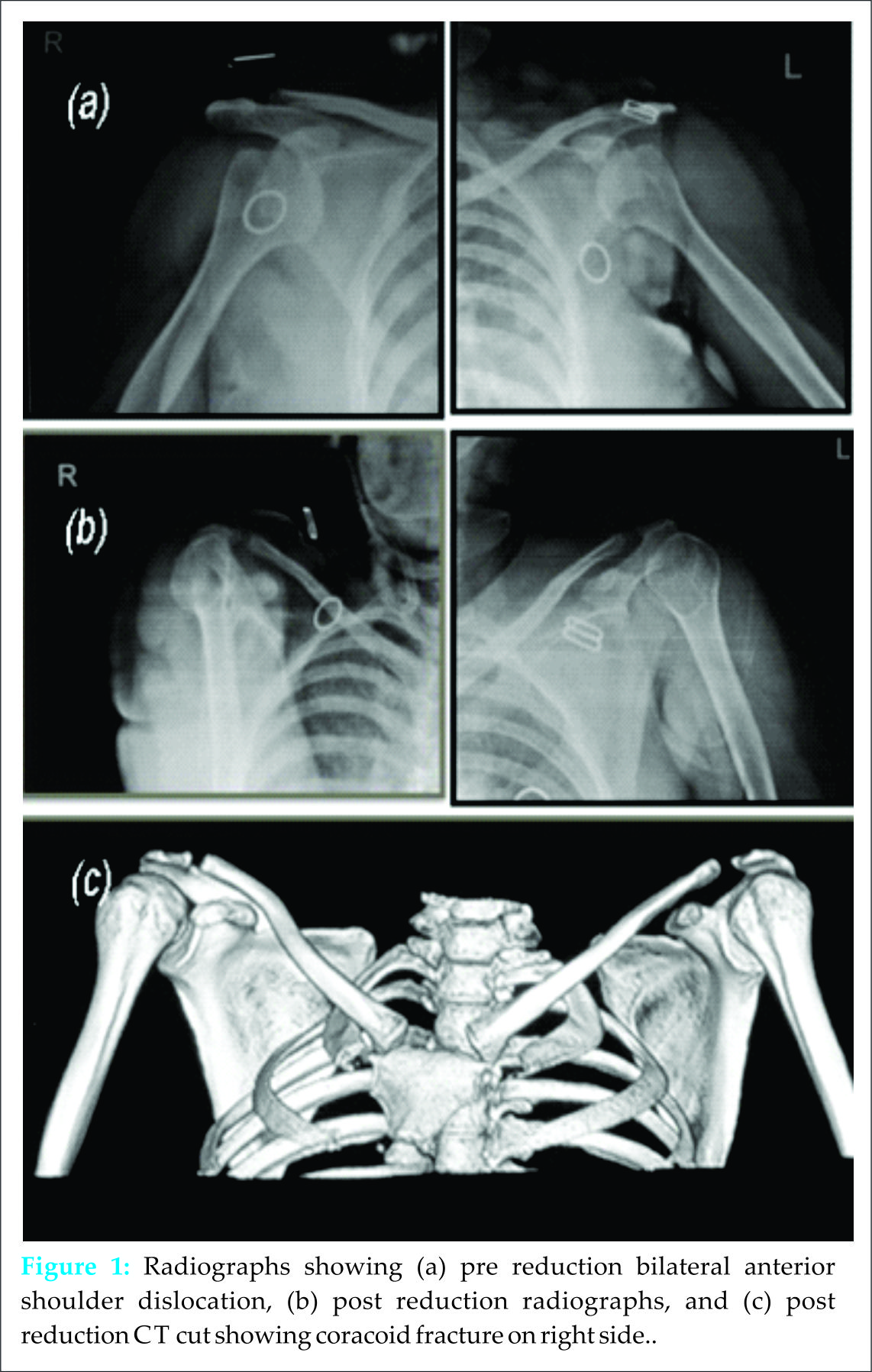 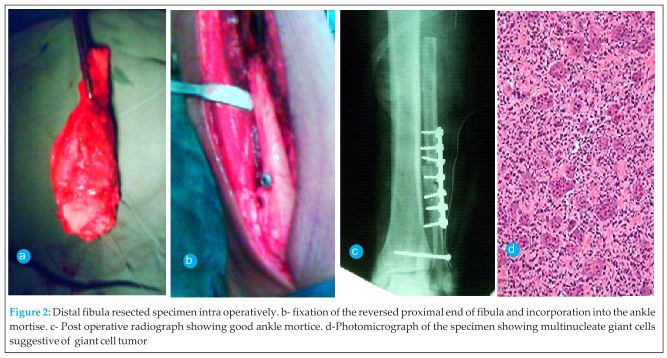