Intramedullary Tuberculoma of Dorsal Spinal Cord: A Case Report with Review of Literature

Intramedullary tuberculomas not responding to medical management must be dealt in a timely fashion with good surgical expertise can improve the patient prognosis and also can help in improving the neurological deterioration.

Introduction: Intramedullary tuberculoma (IMT) are extremely rare lesions should be distinguished from other space occupying lesions like neoplasms. Although it is a treatable condition delaying diagnosis leads to significant morbidity.
Case Report: We report a case of intramedullary thoracic tuberculoma with paraparesis showing deterioration of neurological status during medical treatment. Surgical resection had shown the excellent result.
Conclusion: The possibility of IMT should be seriously considered when an intraspinal mass is found with evidence of tuberculosis. Anti-tuberculous therapy (ATT) is the mainstay of treatment and had shown good results. Surgical removal is to be considered in cases of worsening neurological status while the patient is on ATT.
Keywords: Intramedullary tuberculoma, Surgical resection.

Tuberculous involvement of central nervous system is not uncommon in India. Intramedullary spinal tuberculosis (TB) is a rare disease entity, which was first described by Abercrombie in 1828 [1]. Although it is a treatable condition delaying diagnosis leads to significant morbidity. It can be seen at any level of the cord but usually involves dorsal spinal cord.

A 25-year-old male presented with low back pain, progressive weakness in lower limbs since 1-month and bladder incontinence since 2 weeks. He had no past or family history of TB. On examination, he was afebrile and other vital parameters were normal. Tenderness and gibbus was present in the lower lumbar spine. Neurological examination revealed Grade 3 power in both lower limbs and hypoesthesia below D8 level. Knee, ankle reflexes were exaggerated with clonus. Babinski reflex was positive bilaterally. There were no signs of meningeal irritation. His erythrocyte sedimentation rate was 77 mm at the end of 1-h. HIV enzyme-linked immunosorbent assay was negative. Mantoux test was positive. Chest X-ray showed no abnormality. Plain radiograph of the spine showed paradiscal lesion L2-3 level, while rest of the spine was normal. Magnetic resonance imaging (MRI) of the spine demonstrated paradiscal lesion with paravertebral abscess at L2-3. At the level of D8 vertebra, there was an intramedullary lesion of 12 mm × 9 mm which was hypointense on T1, isointense lesion in T2, and demonstrated ring enhancement on gadolinium contrast (Fig. 1). Based on this clinico-radiological picture, a diagnosis of L2-L3 TB with intramedullary tuberculoma (IMT) at D8 level was made and patient was started on multidrug treatment (isoniazid, rifampicin, ethambutol, and pyrazinamide) and a short course of dexamethasone. At 6 weeks, patient was deteriorated neurologically with Grade 2 power in both lower limbs. Anti-tuberculous therapy was continued. And at 12 weeks patient did not show any signs of improvement. At this point, surgery for spinal cord decompression with excision of the lesion was offered to patient.

Surgical resection was performed through posterior approach in prone position. D7-8 laminectomy followed by midline durotomy was performed. Spinal cord was swollen and there was no evidence of any extramedullary lesion. Posterior longitudinal myelotomy was done. We found a grayish mass with a good plane of cleavage from the surrounding cord (Fig. 2a). A grey, irregular, multilobulated soft mass measuring 12 mm × 10 mm × 6mm was removed completely (Fig. 2b). Surgery was uneventful and post-operative, his neurological remained same. Histopathology examination showed diffuse & dense infiltrate compromising of lymphocytes, plasma cells, and neutrophils with large areas of caseous necrosis surrounded by sheets of the epithelioid cell and Langerhans type of giant cells. Z-N stain showed no acid-fast bacillus, while tissue culture was negative. Patient slowly showed signs of neurological recovery after 6 weeks however his bladder disturbance persisted. At 3 months after surgery, his lower limb power in hip and knee was completely recovered, with recovered bowel and bladder retention. Post-operative after 6 months patient was walking without support and had functional power in both lower limbs.

Discussion
Intracranial tuberculomas are still a common cause of space occupying lesion (SOL) in India. IMT are seen in only 2 out of 100,000 cases of TB and 2 out of 1000 cases of central nervous system TB [2,3]. IMT most commonly is hematogenous, secondary to the TB elsewhere in the body [4], commonly pulmonary TB, but some cases may present only with isolated extrapulmonary forms [5,6]. IMTs tend to occur predominantly in young people, most commonly found in thoracic region [7]. The commonest symptom is subacute spinal cord compression with the appropriate motor and sensory findings, depending on the level of the lesion [4].
MRI is gold standard diagnosis modality, as it accurately shows the site, size, number in such lesions. MRI pictures vary with stage of tuberculoma formation. In the early inflammatory phase, there is an abundance of giant cells and poor collagenous capsule with variable surrounding edema. At this stage, tuberculoma is isointense on both T1W1 and T2W1 and shows homogenous enhancement with Gadolinium contrast. Later on surrounding capsule become richer in collagen and surrounding inflammatory reaction starts disappearing. This results in an isointense lesion on T1W1 and isointense or hypointense lesion on T2W1 images and ring enhancement with hypointense center with Gadolinium contrast. With the development of caseation center become bright on T2W1 called “target sign.” On treatment with chemotherapy the lesion regresses in size and disappears, to be replaced by an area of gliosis, which probably is seen as an area of hypointensity on MRI [8-10].
IMT normally respond well to conventional anti-tuberculous medications [4]. The most important finding is worsening of the patient’s neurologic condition while being treated with adequate anti-tuberculous drugs. An immune reaction has been suggested. In tuberculoma, antigen-reactive lymphocytes are trapped. Anti-tuberculous chemotherapy destroys the bacilli and releases tuberculous protein, which mediates lymphocyte proliferation, resulting in expansion of the tuberculoma [11,12]. Surgical excision is recommended in cases of severe cord compression, increasing neurological deficit in the presence of AKT. IMT usually are hard and well circumscribed. This allows surgical removal without excess trauma to surrounding functional spinal cord tissue [4]. The Mycobacterium TB isolated from the tuberculoma will help in deciding the AKT in the present scenario of drug resistance to AKT. AKT with four drugs HRZE having good cerebrospinal fluid penetration recommended for 12 months post-operative. We suggest a combination of surgical excision of tuberculoma along with AKT for IMT not responding to AKT for a good outcome.

Conclusion
Tuberculoma should be considered in the differential diagnosis of all intramedullary SOL s irrespective of age or presence of extracranial focus of TB in countries endemic to TB. Most of these patients respond well to anti-tuberculous drug therapy with good functional recovery. However, timely surgical decompression in selected cases, provide an excellent long-term outcome.

Clinical
This case report highlights role of surgical treatment in management of intramedullary tuberculoma. Surgical excision should be performed i patient not responding or deteriorating with medical management. 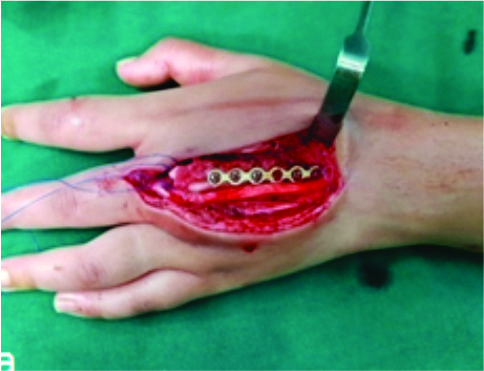 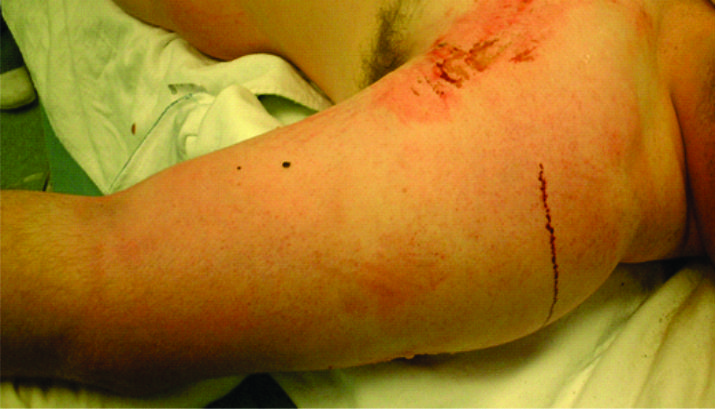