Introduction: Perioperative complications are well known during partial and total hip arthroplasty. One of the common categories of these complications is an intraoperative fractures of the proximal femur. Here we discuss a case of perforation of posteromedial cortex of the proximal femur, while doing a press fit modular bipolar hemiarthroplasty, in a young adult with secondary nonunion of the femoral neck fracture. The cause of this proximal femur perforation was residual fibular strut graft that, redirected the femoral stem into undesirable direction. This complication of residual fibular strut graft has not been disscussed much in the orthopedic literature previously.
Case Report: A press fit modular bipolar hiparthroplasty was performed in a young adult male with nonunion fracture neck of the femur secondary to initial fixation using 6.5mm cannulated hip screws and nonvascularized free fibular strut grafting. Failure to completely remove the fibular strut from the proximal femur lead to difficult negotiation of the femoral stem into the femoral canal and ultimately a perforation in the proximal femur at the level of the lesser trochanter. A revision procedure was done to completely remove the residual fibular graft, and then a fresh press fit modular bipolar hemiarthroplasty was done.
Conclusion: Complete removal of fibular strut graft should be done, while performing hip arthroplasty in patients with failed fibular grafting for fracture neck of the femur.
Keywords: Nounion fracture neck of femur, hemiarthroplasty,press fit, proximal femoral fracture

Case report
We had a 38 year male patient , shopkeeper by occupation,who presented to us with secondary nonunion of femoral neck fracture six months after the index procedure. An attempt at osteosynthesis was done earlier for his left hip femoral neck fracture by fixation using two 6.5mm cannulated hip screws and supplementarysingle free fibular strut graft. After his initial surgical fixation six months earlier he was advised for bed rest for six weeks, but he started premature full weight bearing and also sustained mild trauma to his left hip, when he slipped on the floor one month after the index surgery. Following injury he was unable to stand up and bear weight on his left lower limb. On clinical examination patient was unable to bear weight and walk on the left lower limb, his left lower limb was shortened and externally rotated at hip.Active straight leg raising test was not possible on left side. There was tenderness over left hip joint, his left greater trochanter was smooth on palpation and proximally migrated. Movements of the left hip were painfully restricted. Head of the screws were palpable through the laterally placed surgical scar mark over the left proximal thigh. At the time of presentation to us his radiograph of pelvis including both hips and lateral view of involved left hip showed a nonunion fracture neck of the femur with varus collapse, with broken hip screws, tip of broken screw reaching almost up to the articular surface of the femoral head, back out of the remaining hip screws and graft fracture [Fig.1]. Based on the clinico-radiological examination we planned for an uncemented modular bipolar prosthesis. His left hip joint was opened by a posterior skin incision, all the hardware was removed, and the fibular strut graft that was visible to the necked eye was also removed from the femoral side. The acetabular cartilage was completely intact. Femoral canal was prepared for uncemented modular bipolar prosthesis, and an uncemented modular bipolar prosthesis was inserted into the prepared femoral canal.. There was no audible bony crepitus or abnormal mobility in the femur while introducing the prosthesis into the femoral canal. Subsequently the head of prosthesis was reduced into the acetabular socket and the stability of the hip joint was checked.The hip joint was not stable and was dislocatable with mild adduction and at 90 degree hip flexion. An urgent x-ray of the left hip (AP and lateral views) was done using the portable x- ray machine. These x-rays [Fig.2] showed perforation of the postero medial cortex of the proximal femur at the level of lesser trochanter. These x-rays also showed a residual fibular strut graft over the postero lateral cortex of the trochanter flare protruding into the femoral canal. This residual fibular strut graft resisted the smooth passage of the femoral stem along the lateral wall of the proximal femur and redirected the femoral stem into an undesirable direction ultimately leading to perforation of the posteromedial cortex of the proximal femur at the level of lesser trochanter. As we removed the prosthesis we found a perforation hole on the posteromedial femoral cortex at the level of lesser trochanter, however there was no complete fracture. The culprit residual fibular graft was removed with the help of narrow curved osteotome and bone nibblers. And it was flushed with lateral femoral wall. A new modular bipolar prosthesis of the same size was introduced, and joint was reduced, the hip stability was checked again, and it was found satisfactory. The perforation in the postero-medial cortex was sealed with cancellous iliac crest bone graft. A check radiograph was done again and was found satisfactory [Fig.3].

Conclusion
Utmost care should be taken to remove the fibular strut graft, while performing hip arthroplasty, in such femoral neck fracture nonunion patients treated earlier with fibular strut grafting, where further attempts at osteosynthesis may not appear fruitful.

In patients with secondary nonunion of fracture neck of the femur, following failed primary fixation and fibular grafting, every effort should be made to remove the fibular graft from the proximal femoral canal. Failure to remove this graft may causeintraoperative femur fracture,during canal reaming or inserting the stem into the femoral canal. 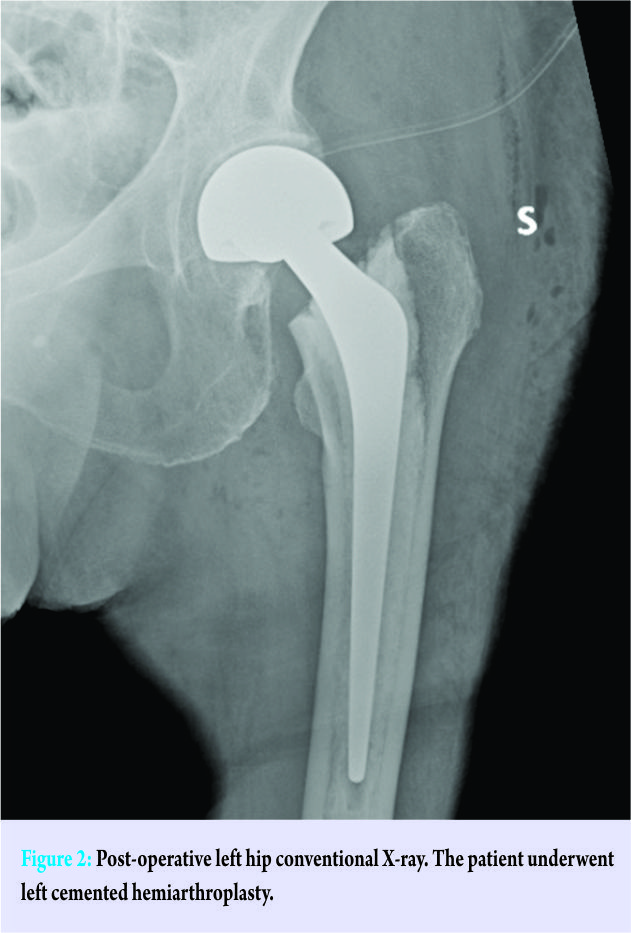 Cemented Hemiarthroplasty of the Hip in a Patient with Ipsilateral Knee Arthrodesis: Surgical Diffic...

Hip Hemiarthroplasty in Neurologic or Cognitively Impaired Patients: A Case Series of Post-operative... 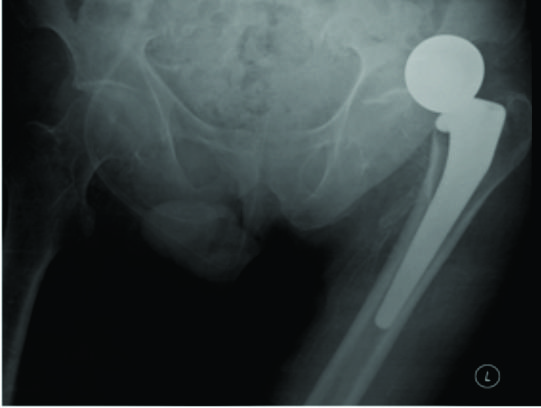 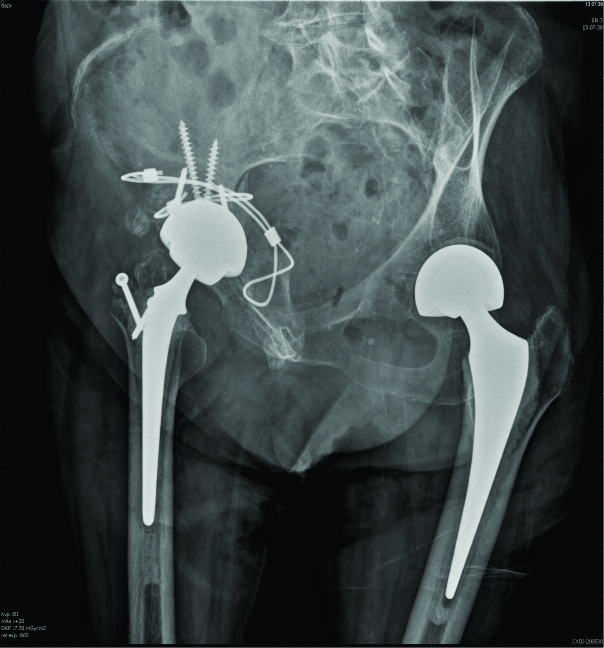