Are Two Surgeries Necessary for Correction of 1 Deformity- Cervical Kyphosis in Neurofibromatosis?- A Rare Case Report

If one can achieve neural decompression and correction of cervical kyphosis using only anterior approach, one should not consider a combined approach, needlessly causing surgical morbidity to the patient. However, in such a case of neurofibromatosis, skillful execution of the procedure is important considering very poor bone quality ?

Introduction: Dystrophic neurofibromatosis type I, involving upper cervical spines, is rare, which can cause serious complications. Myelopathy develops due to compression of the cord posteriorly. Surgical correction has its inherent risks and difficulties because of poor bone quality, difficult anterior approach because of bizarre deformities, and the necessary manipulation, which might cause more cord damage and ischemia. Anterior decompression with alignment correction was an early popular choice. But without posterior shortening, the technique proved unsatisfactory in restoring normal alignment. It tended to expose the graft bone at increased risk of insufficient union or extruding. So a combination of anterior decompression and posterior correction was generally recommended. This report describes surgical technique applicable to cases of severe cervical kyphosis using only anterior approach.
Case Report: A 13-year-old boy, a case of neurofibromatosis type 1 presented with neck pain, and bilateral upper limb radiculopathy for 2 months with affected daily living, with intact neurology. Imaging demonstrated 46° kyphosis (C3–C5),marked dystrophic changes of the C4 and C5, extreme dorsal angulation indenting the cord. Anterior surgery was planned for the patient with neuromonitoring. Through left anterior approach, total C3, C4 and C5 corpectomy was accomplished, keeping the PLL intact. The defect was filled with a fibular cortical graft which was stabilized with 48 mm cervical screw plate, showing full correction of kyphosis postoperatively. At the follow-up 6 months postoperatively, lateral plain radiograph showed stability of the cervical spine fusion without correction loss. The patient had full relief from tingling and numbness with no neurological deficit and could resume his daily duties. Patient is asymptomatic at 2 years follow up.
Conclusion: Only anterior decompression and fusion are effective in satisfactorily correcting cervical kyphosis in cases of neurofibromatosis without neurologic compromise and avoids the risk of damage to vital neurovascular structures because of pedicle or lateral mass screw fixation.
Keywords: Cervical kyphosis, Neurofibromatosis, Only Anterior decompression and fixation

Spinal involvement in neurofibromatosis (NF) is divided into two types. In non-dystrophic types, the most common abnormality is idiopathic scoliosis. There is no bony involvement. Whereas in dystrophic types, there is bone is involvement. Dystrophic deformity is usually found in thoracic and lumbar spines [1-4]. In only rare cases, dystrophic NF Type I may involve upper cervical spines leading to severe kyphoscoliosis endangering the spinal cord [5,6]. Previous reported cases of severe kyphosis and myelopathy of the cervical spines were treated by one-stage anterior and posterior procedures [7-9]. There are very few documented cases of treatment of cervical kyphosis due to NF. Even its reliable treatment guidelines are yet to be established. Myelopathy develops usually as a result of the posterior aspect of the vertebral body causing compression of the spinal cord. Surgical correction is required with special care, in restoring the normal alignment in affected vertebral bodies due to the thin and fragile bone common with this disorder. This report describes surgical technique applicable to cases of severe cervical kyphosis due to NF.

Case report
A 13-year-old boy presented with neck pain and bilateral upper limb pain for 2 months. He was a known case of NF Type 1 with multiple cafe-au-lait spots all over the body. Despite experiencing the deformity, his daily life was normal, including attending school. Bilateral upper limb pain, tingling and numbness began 2 months before presentation. Motor examination revealed 5/5 strength in all the limbs. The deep tendon reflexes were normal. His rectal tone and perianal sensation were normal. No relevant family history was found.
Lateral plain radiograph demonstrated 46° kyphosis (C3-C5) and marked dystrophic changes of the C4 and C5 vertebrae (Fig. 1). Sagittal T2-weighted magnetic resonance imaging of the cervical spine showed reduced anteroposterior diameter in C3-C7 vertebrae with extreme dorsal angulation indenting the ventral thecal sac and cord at the level of C5. There was a reversal of cervical lordotic curvature (Fig. 2).
The procedure of operative treatment was divided into three steps. In the first step, the patient was placed in the supine position. Through a left anterior approach, total C3, C4 and C5 corpectomy was accomplished, keeping the posterior longitudinal ligament (PLL) intact. Neuromonitoring was used throughout the procedure for monitoring the function of the spinal cord. Further correction could not be done because the neuromonitoring showed increased action potentials on screen. The defect was filled with a fibular cortical graft, and the graft was stabilized with 48 mm cervical screw plate (Fig. 3).

After surgery, the kyphosis was corrected from 46° to 26°. A sternal-occipital-mandibular immobilizer brace was worn post-operatively for 2 months. The patient was permitted to walk in 1 week after surgery. At the follow-up 2 months post-operatively, lateral plain radiograph showed the stability of the cervical spine fusion without correction loss. The patient had full relief from tingling and numbness with no neurological worsening. The patient had no complains on a 1-year follow-up.

Discussion
There are very few documented cases of cervical spine abnormalities with NF. The most extensive review of cervical spine abnormalities to date was by Yong-Him et al., who reported that 44% of the cases had cervical lesion. There are varieties of deformities associated with this disorder, such as vertebral scalloping, foraminal enlargement, the collapse of vertebral bodies, loss of normal lordosis, kyphosis, and atlantoaxial rotatory subluxation. Among them, kyphosis is the most common and usually asymptomatic. The findings of Craig and Govender [6] are somewhat at variance with those of Yong-Hi et al., with five of their eight cases of cervical kyphosis due to NF having a neurologic deficit. Patients with NF may have concurrent intradural tumors, intramedullary spinal cord tumors, or nerve sheath tumors that may coexist with spinal deformity, which should be ruled out with enhanced magnetic resonance imaging prior to surgical treatment of the spinal deformity. Dystrophic NF Type I, involving upper cervical spines, is rare. When it appears, it can lead to serious neurological complications. Surgical treatment has inherent risks and difficulties due to several reasons. First, poor bone quality is prone to difficult rigid fixation. Second, the anterior approach to the upper cervical region is not very feasible even if we disregard bizarre deformities. Third, manipulation of the extreme degree of deformity in the presence of compromised cord may lead to more cord damages and ischemia. Some authors suggested using combined anterior and posterior approach, such as Kokubun et al. (1992) [7] and Goffin and Grob [8]. The children in those reports were treated by anterior grafting up to C2 level. The apex of kyphosis in our case was at the C3/C5 level. The graft would also prevent progression of kyphosis during healing period. There is a high potential of remodeling of the cervical deformities proposed by to Shiaki et al. The surgical technique commonly used for the correction of the deformities consists of correction and stabilization of the deformity and decompression of the neural elements and requires carefully coordinated execution of anterior column lengthening, posterior column shortening, and hinging correction around the PLL [3-5]. Use of the PLL serves to prevent excessive traction on the neural elements. Historically, there have been a number of approaches to correction. Anterior decompression with alignment correction was one of the early popular choices. However, this technique, not accompanied by posterior shortening, very often proved unsatisfactory in restoring normal alignment. It tended to expose the graft bone at increased risk of insufficient union or extruding. For these reasons, now a combination of anterior decompression and posterior correction is generally recommended. With respect to this approach, there are several reports published in recent years. Both Kokubun et al. [7] and Ward et al. [10] employed rods and hooks for the purpose of posterior fusion. Asazuma et al. [11] used vascularized fibula graft combined with spinous process wiring. Goffin and Grob [8] adopted a lateral mass-plate fixation method. The technique, we describe in this article, is an excellent approach applicable to severe kyphosis and has a certain advantages over the foregoing methods. First, it reduces substantially the risks of lamina fracture as compared with the hook-and-rod method. Second, it provides much better stability in the fixed elements as compared with the lateral mass-screw method [12]. Third, it reduces substantially the number of corpectomies and length of the graft bone required in comparison with the vascularized long fibula graft. In this case, three-level corpectomy was required to correct severe kyphosis. Obviously, the crucial question with respect to pedicle screw method is the risk of damage to neurovascular structures. However, this risk could now be effectively eliminated with the use of navigational computer assistance UG.

Conclusion
Only anterior decompression and fusion are effective in satis­factorily correcting cervical kyphosis in cases of neurofibroma­tosis without neurologic compromise and avoids the risk of damage to vital neurovascular structures because of pedicle screw fixation. However long-term follow-up is required to as­sess the graft stability and progression of kyphosis.

If one can achieve neural decompression and correction of kyphosis using only anterior approach, one should not consider a combined anterior and posterior approach, needlessly causing surgical morbidity to the patient. However, in such a case of neurofibromatosis, skilful execution of the procedure is important considering very poor bone quality. 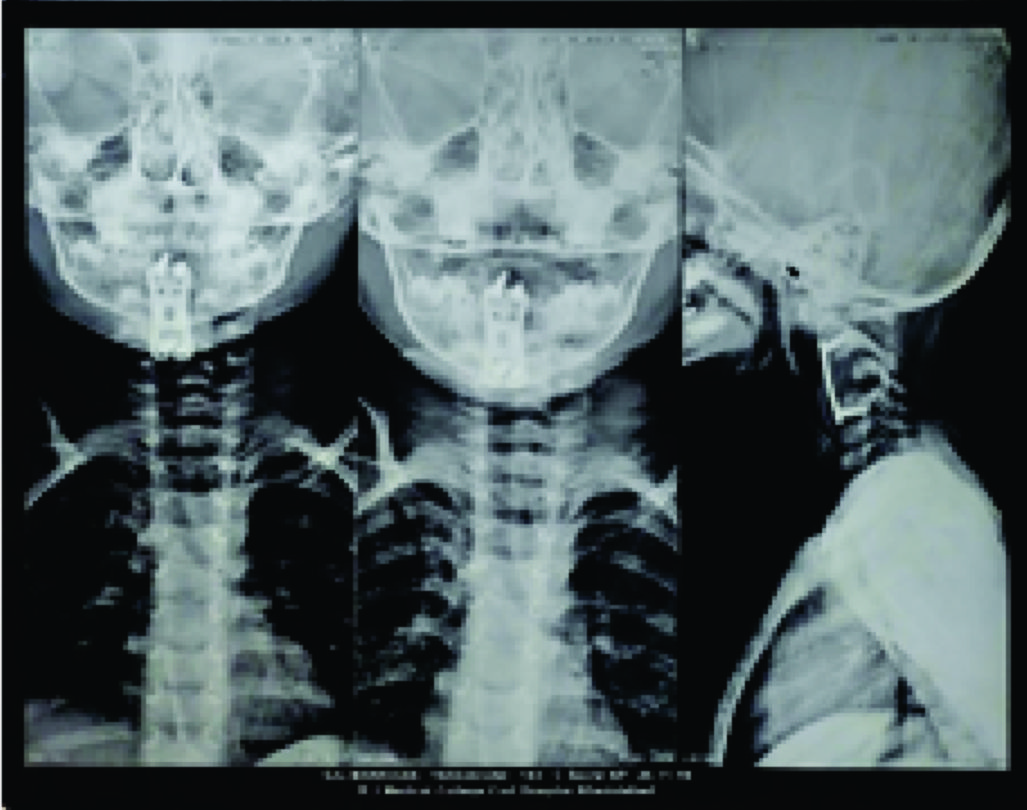 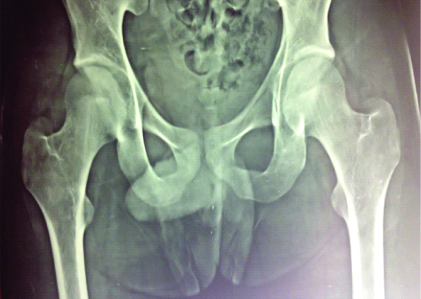 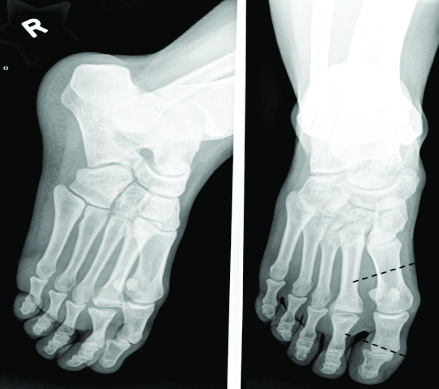 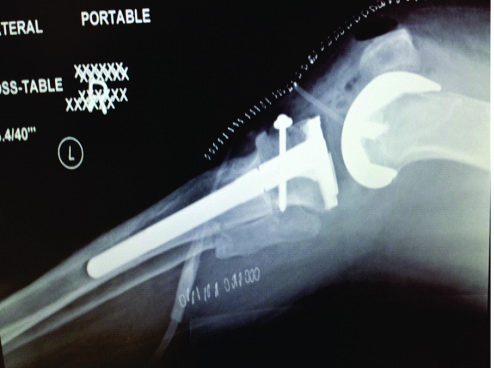