Postoperative vascular complications, though rare are unexpected but possible hurdles in any arthroplasty procedure. Close immediate post-operative observation of the patient as well as the employment of suitable imaging techniques are crucial for the timely diagnosis of such an injury and overall success of the surgery.

Introduction: Vascular complications post-operative to a total hip arthroplasty are a very rare phenomenon. Only a few isolated cases have been reported to date. Diagnosis of such a case in a timely manner so as to preserve the limb is also difficult due to the subtle signs with which the patient presents. We report a case of complete occlusion of the common femoral artery following total hip arthroplasty due to acute thrombus formation.
Case Presentation: A 56 year old Indian male patient underwent a cemented total hip replacement. Three hours post-operatively, the patient’s left lower limb was found to be pale and pulseless. Angiography showed complete occlusion of the left common femoral artery. Thrombectomy was carried out immediately and the patient recovered well.
Conclusion: Vascular injuries are highly unusual findings following a total hip arthroplasty. Careful pre-operative and immediate post-operative monitoring of the patient is essential. Signs such as limb ischemia, absence of pulses, etc. must be recognized as early as possible and the necessary investigations and procedures should be carried out without any delay.
Keywords: total hip arthroplasty, vascular injury, postoperative complication, acute thrombus.

Hip replacement has become an increasingly popular procedure today due to technological advancement and the relatively low risk of life-threatening complications [1]. Vascular complications post-operative to a total hip arthroplasty are a very rare phenomenon. Only a few isolated cases have been reported to date. Diagnosis of such a case in a timely manner so as to preserve the limb is also difficult due to the subtle signs with which the patient presents.
The most commonly affected vessels are the external iliac artery and the common femoral artery. Complications may occur due to direct injury by retractors [2,3] or thermal injury due to cement or the use of cautery [4,5]. Other iatrogenic causes such as forced traction are uncommon. We report a case of complete occlusion of the common femoral artery following total hip arthroplasty due to acute thrombus formation.

Case Presentation
A 56 year old Indian male patient was admitted for post-traumatic avascular necrosis of the head of the femur leading to degenerative arthritis of his left hip joint (Fig.1). He was a known case of hypertension on medication and a chronic smoker as well as an alcoholic. A cemented total hip arthroplasty was performed through the Southern Moors (posterior) approach (Fig.2). Immediately following the surgery, his pulses were felt but had been feeble. However, three hours post-operatively the resident doctor noticed that the patient’s left lower limb had become cold and the dorsalispedis artery, popliteal artery, and femoral artery pulsations were absent on the left side. There were no ankle movements. Since the patient was on epidural anesthesia, the patient did not complain of any pain. An emergency Doppler scan suggested narrowing of the left iliac and left common femoral vessels with monophasic flow. A CT angiogram revealed complete occlusion of the left common femoral artery (Fig.3).

With an urgent opinion from cardiothoracic and vascular surgery, the left femoral artery was exposed and a thrombus was noticed (Fig.4). Angioplasty was carried out using Forgarty’s catheter and the vessel was recanalized (Fig.5). On passing the catheter proximally, one layer of thickened intima was removed followed by clots. Good blood flow was established on removal. When the catheter was passed distally, not many clots were present. After removal of the occluding thrombus measuring 2.5 cm in length and intimal plaque of one cm length confirmed by histopathological examination (Fig.6), the artery was closed using 6-0 prolene sutures (Fig.7).

Peripheral pulses were felt. After 12 hours, there was active movement of the limb. A post-operative Doppler scan showed good flow of blood within the affected vessel (Fig.8). Though a postoperative CT angiogram would have further affirmed the successful findings, it was not performed due to the financial constraints of the patient.The patient was started on anticoagulants for a course of three weeks. Since the remainder of the post-operative period was uneventful the patient was discharged 17 days later and advised to return for a follow-up and repeat Doppler scan after one month. He was also strictly advised to stop smoking.

Discussion
Extensive studies in the past have accounted the average frequency of vascular complications following hip arthroplasty to be merely 0.2-0.3% [2,3,6]. However, this frequency may range from 0.08% [7] reported in a large single center study to 0.67% [1]. These statistics encompassed a wide variety of arterial complications resulting in lower limb ischemia, pseudoaneurym, hemorrhage, and arterial transection [7]. Hence, it can be understood that the incidence of acute thrombus formation is even more exceptional.
The circumstances leading to such unforeseen potentially limb-threatening impediments must be analyzed. Various risk factors may predispose to arterial lesions such as vascular history including smoking and peripheral vascular disease [9], bone anomalies, anatomic abnormalities, and acetabulum or pelvic fractures [3]. The mechanism behind these lesions was explained by Duparcunder three categories: trauma resulting from elongation and torsion by dislocation and reduction maneuvers, persistent pressure by the tip of Hohmann retractors, or penetration of vessels (commonly seen in revision surgeries) [10]. Other than directly inflicted traumas, there is possibility of overextension of atherosclerotic arteries with subsequent tear of intima and thrombus formation [9]. Avulsion of the vessel may occur due to manipulation of the hip during surgery [6]. Usage of cement increases the chances of leakage leading to a crush injury of the common femoral artery [4] as well as the chances of thrombotic occlusion from the exothermic reaction during cement polymerization [3,6,9]. Literature also shows that there is a greater risk for such complications in the case of any pre-existing arterial graft [9]. In our case, the vessel wall was intact and there were no signs of trauma or cement extrusion. The only finding favoring thrombosis was the past history of the patient stating history of hypertension and smoking.
Vascular complications if diagnosed too late or left unnoticed can result in debilitating consequences. Hence, the necessary precautions must be carried out pre-operatively and post-operatively. In the study by Calligaro et al, 44% of arterial injuries in total hip and knee replacement surgeries failed to be diagnosed on the day of the surgery [7]. Early diagnosis is the key to preventing drastic lesions which may potentially progress to compartment syndrome or even requirement of amputation of the limb [9].The prompt management of such complications greatly depends on the severity with which they present [10]. It has been advised that catheter-directed thrombolysis ideally be carried out within four to six hours of occurrence. However, most thrombi are surgically manageable if operated within 24 hours [11]. In our case, angioplasty was performed approximately 10 hours following the presentation of the thrombus. Fortunately, the limb of the patient could be salvaged.It is important that patients with an arteriopathic or vascular surgery history consult a vascular surgeon before opting for such invasive procedures [3]. Pre- and immediate post-operative control of arterial pulses and neurological signs [9] as well as careful preoperative assessment of proximate vessels by means of Doppler, ultrasound, or three-dimensional enhanced CT scan are crucial [2]. Paraclinical assessment may also be useful in risky situations [3]. In the case of total hip arthroplasty, the approach also plays a significant role in preventing vascular complications [3]. In procedures involving cement, pressurization under guidance of transparent pressurizers with force directed superiorly may minimize the chances of cement leakage antero-inferiorly [4].

Conclusion
Vascular lesions are uncommon in total hip arthroplasty. Arterial thrombosis of the common femoral artery is an even rarer discovery. Utmost care must be taken while operating to prevent any iatrogenic damage to the vessel walls. Careful pre-operative and immediate post-operative monitoring of the patient is essential especially if the patient is at risk for vascular injury. Signs such limb ischemia, absence of pulses, etc. must be recognized as early as possible and the necessary investigations and procedures should be carried out without any delay.

Postoperative vascular complications, though rare are unexpected hurdles in any arthroplasty procedure. A timely diagnosis of such an injury is crucial to the preservation of the patient’s limb and overall success of the surgery. Hence, close immediate post-operative observation of the patient as well as the employment of imaging techniques are important.

RELATED POSTS
Thrombosis of the Superficial Femoral Artery following Fixation of Intertrochanteric Fracture of the...
Injury to the Superior Gluteal Artery during Intramedullary Fixation of a Proximal Femoral Fracture ... 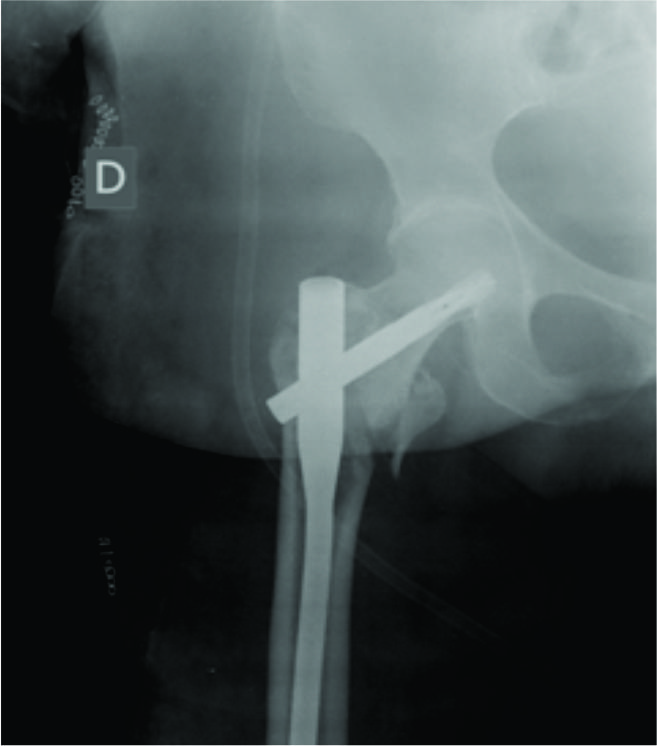 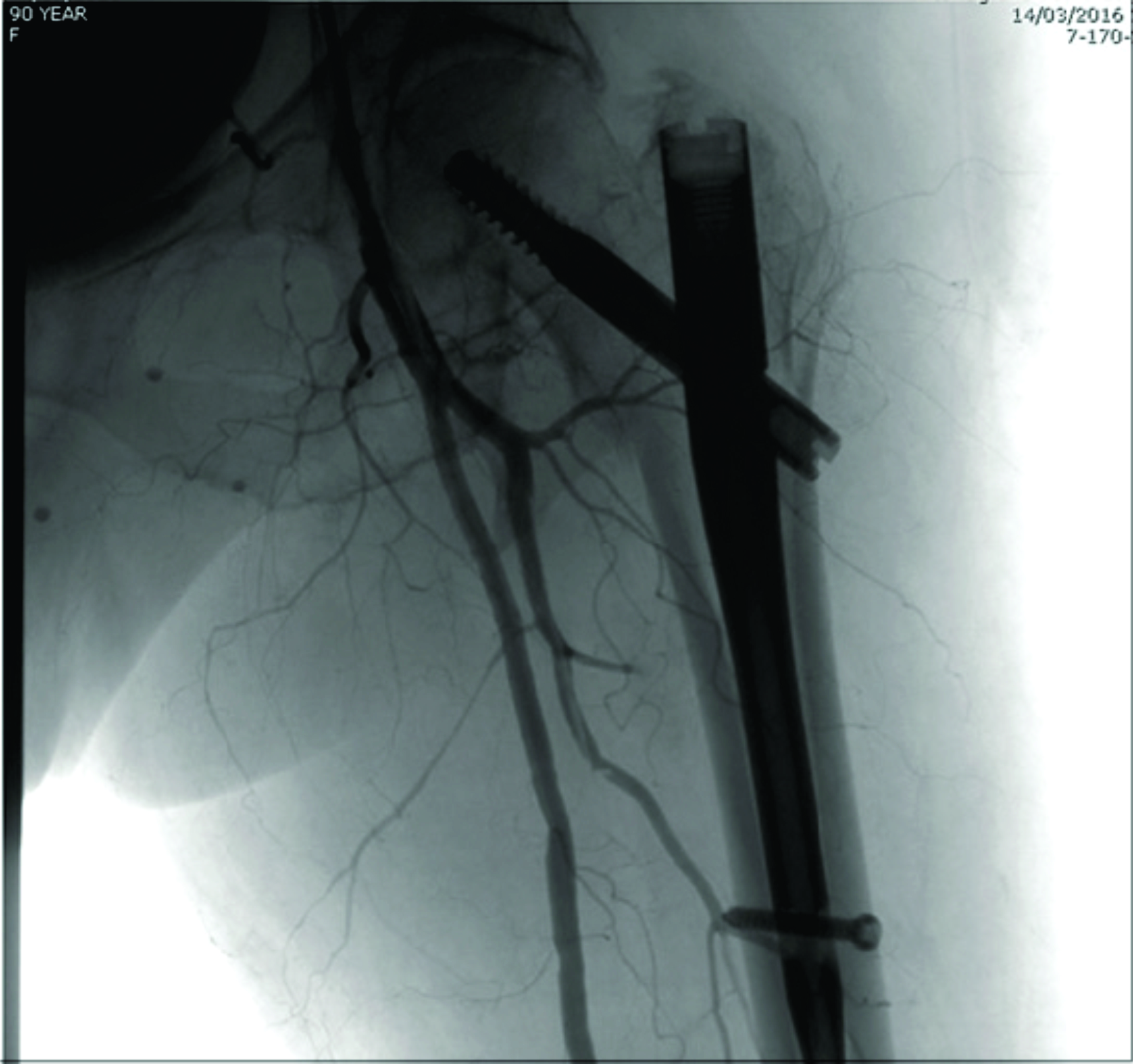