Early diagnosis of an extremely rare and fatal genetic disorder of infancy.

Introduction: Infantile Systemic Hyalinosis (ISH) is a rare and fatal genetic disorder with mutations in Capillary morphogenesis gene-2 CMG2 / Human anthrax toxin receptor gene-2 ANTXR2 resulting in spindle cell proliferation, altered collagen metabolism with extensive deposition of amorphous eosinophilic PAS positive hyaline material in the connective tissues of various organs. The common presenting features would be progressive stiffness of multiple joints, skin lesions, multiple episodes of protracted infections, prolonged diarrhoea and failure to thrive. ISH is a rapidly progressive painful disorder of infancy with a very short life expectancy.
Case Presentation: 3 months old identical twins born to a 5th degree consanguinous couple were brought with complaints of excessive cry, deformity of all four limbs, recurrent episodes of respiratory tract infections and diarrhoea since birth. Evaluation of both the probands revealed facial dysmorphism with perinasal nodules, gingival hypertrophy, fixed deformities of multiple joints bilaterally, umbilical hernia, fleshy perianal nodules and pigmented patches over knuckles and ankle. A clinical diagnosis of ISH was suspected and confirmed by detection of homozygous c.277_278insATTATTT (or p.L93Yfs*14) in exon 3 of the ANTXR2 gene. The probands were managed symptomatically and parents were counselled regarding prenatal diagnosis in future pregnancies.
Conclusion: IHS is commonly misdiagnosed as Arthrogryposis Multiplex Congenita and is often mismanaged with manipulation of the stiff joints and invasive surgical procedures. Prenatal diagnosis by chorionic villus biopsy is possible once causative mutation in a family is identified. Invasive surgical interventions for histopathological analysis can be avoided as clinical features are most often classical and genetic analysis is confirmatory. Management is conservative and symptomatic. We report this case of identical twins with features of ISH in view of its rarity as timely clinical suspicion can avoid painful and invasive procedures for diagnosis and management.
Key Words: Consanguinity, Capillary morphogenesis gene, Anthrax toxin receptor, Hyaline deposition, Gingival hypertrophy, Fleshy perianal nodules.

Infantile Systemic Hyalinosis (ISH) is a rare autosomal recessive genetic disorder caused by biallelic mutations in the ANTXR2 gene. It is exemplified by progressive deposition of amorphous /hyaline material in various connective tissues usually affecting subcutaneous regions on the scalp, ears, neck, face, hands, feet, and manifests as pearly papules or fleshy nodules with severe and painful restriction of joint movement, gingival hypertrophy and systemic involvement of varying severity [1]. ISH is a rapidly progressive painful disorder of infancy with a very short life expectancy [2]. It is allelic to a condition previously called juvenile hyaline fibromatosis, which is now known to be a later onset, relatively milder phenotype with less frequent systemic involvement and improved survival.  The largest series reported till date was of 19 cases and most of them were offsprings of consanguinous couples [3]. We report a case of identical twins with features of ISH, a rare entity to cite in the literature.

Case Presentation
Three months old identical twins (Fig. 1) born to a consanguinous couple (Fig 2: Pedigree) were brought with complaints of excessive cry, deformity of all four limbs, recurrent episodes of upper respiratory tract infections and diarrhoea since birth. Any attempt of manipulation by parents lead to excessive cry, without any relief from stiffness. Both the children were examined by several doctors and were referred to us with a query of Arthrogyrposis multiplex congenita.
It was noted that the identical twins were delivered by caesarean section at full term with birth weight of 2.3 and 2.1 kg respectively. Both of them cried at birth and had stiff hips and knees. On examination, both the probands had facial dysmorphism, fixed flexion deformity of hips and knees, umbilical hernia and pigmented patches over knuckles and ankle. The parents were advised genetic analysis to rule out ISH and Torg Winchester Syndrome. They were lost to follow up for one year subsequently.

At the age of 15 months, the children were brought back with increased severity of earlier symptoms along with additional features like macrocephaly with wide open fontanelle, thickened skin and subcutaneous tissue around multiple joints with fixed deformity of hips, knees and ankles, deviation of neck to one side, extension deformity of elbow in one child and flexion deformity in the other. Nodular lesions around the nostrils, hypertrophied gums and fleshy nodular excrescence around the anus were noted (Fig3: A-F). Routine blood investigations and serum amino acid levels were normal. Radiography of the extremities revealed decreased bone density (Fig. 4). Genetic analysis of ANTXR2 gene revealed that the babies were homozygous for insertion mutation c.277_278insATTATTT (or p.L93Yfs*14) in exon 3 confirming the diagnosis of ISH (Fig. 5). All the invasive procedures described in the literature for diagnosis and management of ISH were thus avoided.

Both the babies were symptomatically managed. Parents were counselled regarding the need for prenatal diagnosis by chorionic villus sampling in future pregnancies.

Discussion
Ishikawa and Hori introduced the term Systemic hyaline fibromatosis in 1964 [3] and detailed description of ISH was given by Landing in 1986 [4]. S.M. Al-Mayouf et.al from Saudi Arabia reported the largest series (19 cases) of ISH in the literature. ISH is an autosomal recessive disorder with identified mutations in Von Willebrand factor A (VWA) like domain of Capillary morphogenesis gene-2 (CMG2)/ Human anthrax toxin receptor gene-2 (ANTXR2) gene located on chromosome 4q21.21. Mutations in this gene lead to excessive proliferation of spindle cells, abnormal glycosaminoglycans and collagen synthesis with extensive deposition of amorphous eosinophilic hyaline material in the connective tissues of various organs like skin, cardiac and skeletal muscles, gut, thyroid and adrenal glands [2,3,5,6,7]. 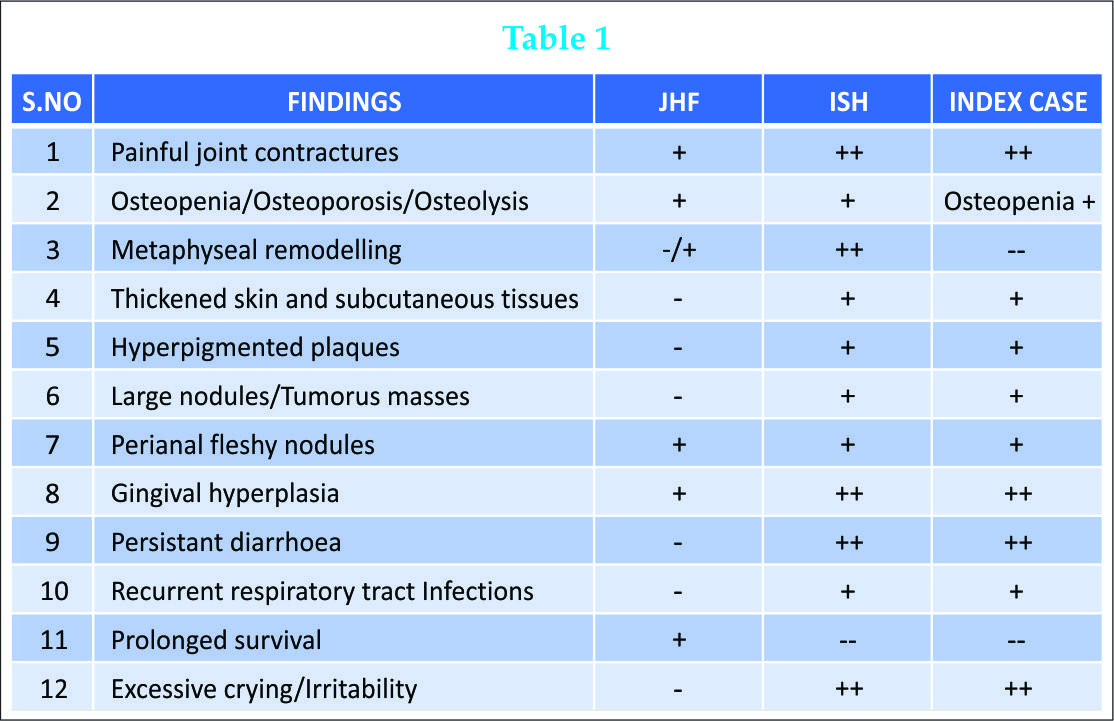 Two allelic disorders namely ISH and Juvenile hyaline fibromatosis (JHF) have been described with the mutation in CMG2/ANTXR2 gene. A detailed comparison of ISH and JHF along with the present case is tabulated for ready reference (Table:1). The children with ISH present with deformities of multiple joints, excessive cry and difficulty in handling, coarse facies, inflexible and thickened skin with papulo-nodular lesions, gingival hyperplasia with difficulties in feeding, persistent diarrhoea, recurrent respiratory infections, failure to thrive and succumb early before 3 years of age [1]. JHF is presently believed to be a milder phenotype of ISH and not a distinct clinical entity [2,8].
Differential diagnosis of Arthrogyrposis multiplex congenita [9], Infantile stiff skin syndromes, Torg Winchester Syndrome, Farbers syndrome, NOMID [10] (neonatal onset multisystemic inflammatory disease) and amyloidois are usually considered in a child presenting with features of IHS/JHF. Histopathological evidence of abundant homogenous amorphous eosinophilic material with sparse cellularity in the dermis was the corner stone for diagnosis of ISH in most of the cases described in the literature. As the clinical features of ISH are diagnostic in most cases, molecular analysis of the ANTXR2 gene can be the first and stand alone investigation for the confirmation of diagnosis. This can obviate the need for invasive procedures like skin biopsy for diagnosis [1,2,3,5,6].
The management of children with ISH is primarily symptomatic and there is no effective treatment [1,2,11]. Genetic counselling plays an essential role in preventing recurrences by providing information about recurrence risk and option of prenatal diagnosis to the family.

Conclusion
ISH is a rapidly progressive, debilitating and fatal genetic disorder of infancy with abnormal glycosaminoglycan and collagen synthesis and amorphous hyaline matrix accumulation in various organs owing to the deletion/nonsense mutation in CMG-2/ ANTXR-2 gene. Prenatal diagnosis by chorionic villus biopsy is possible once causative mutation in a family is identified. It is commonly misdiagnosed and mismanaged in the early stages. Invasive surgical interventions for histopathological analysis can be avoided as clinical features are most often classical and genetic analysis is confirmatory. Management is conservative and symptomatic.

Being a very rare entity, Infantile Systemic Hyalinosis is commonly misdiagnosed and mismanaged as Arthrogryposis Multiplex Congenita in the initial stages. High index of suspicion, clinical knowledge of ISH and confirmation by genetic analysis are desirable to avoid misdiagnosis and mismanagement.

RELATED POSTS
Training by Publication: Can Journal be mentors... 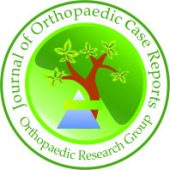 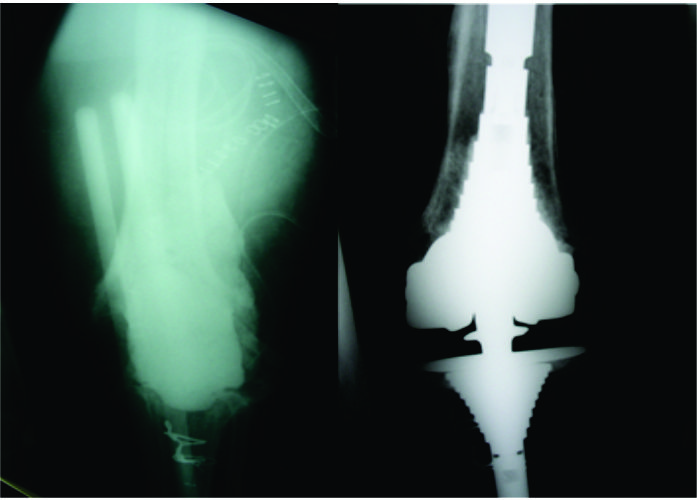 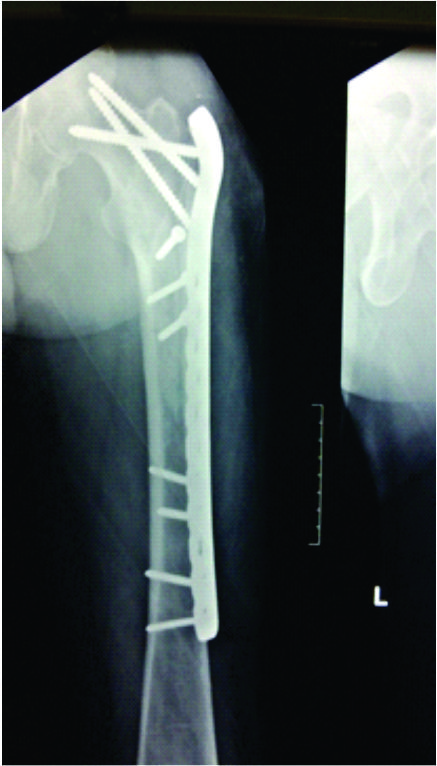 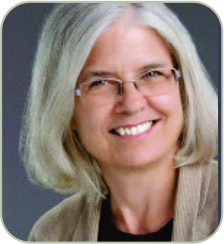