Any patient presenting with anterior elbow dislocation, that too a closed injury, one should be highly proactive and be suspicious of brachial artery injury especially rupture and contemplate on early exploration for a favorable functional outcome of the limb.

Introduction: Anterior elbow dislocation is an infrequent lesion, produced by direct trauma to the proximal ulna after a fall on the elbow in flexion and injury to the neurovascular bundle is not infrequent. Authors report a case of acute anterior dislocation of the elbow joint with neurovascular injury.
Case Report: A 30-year-old male admitted with a history of accidental fall followed by pain, swelling over his left elbow. Clinical, radiological, Doppler investigations revealed anterior dislocation of the elbow with brachial artery injury with posterior interosseous nerve palsy without any bony injury. Immediate closed reduction, primary vascular repair with fasciotomy was done following which elbow function improved.
Conclusion: Anterior dislocations of elbow joint are among the rarest of injuries. Because the dislocation is anterior, injury to nerve and vessel can occur frequently. Therefore, a careful assessment for neurovascular injury mandatory. Early proper reduction and management of neurovascular injury if any is necessary for good elbow function.
Keywords: Anterior elbow dislocation, brachial artery injury, posterior interosseous nerve palsy, closed reduction, primary vascular repair.

Case Report
A 30-year-old adult male presented to the trauma ward with a history of accidental fall followed by stampede over his left elbow and had pain, swelling, and deformity over his left elbow region. On clinical examination, his elbow was in 20° flexed attitude, forearm in supination and a hollow depression present on posterior aspect of forearm (Fig. 1), with loss of olecranon prominence. The left upper limb was swollen with blisters over the forearm region (Fig. 2).

Stretch pain was present; radial pulse was not palpable. There were finger and thumb drop. The dorsiflexion of wrist was possible.

Plain radiography showed anterior dislocation of the elbow (Fig. 3). Preoperatively, brachial and ulnar arterial flow was not recordable with Doppler, but monophasic response was present in radial artery. 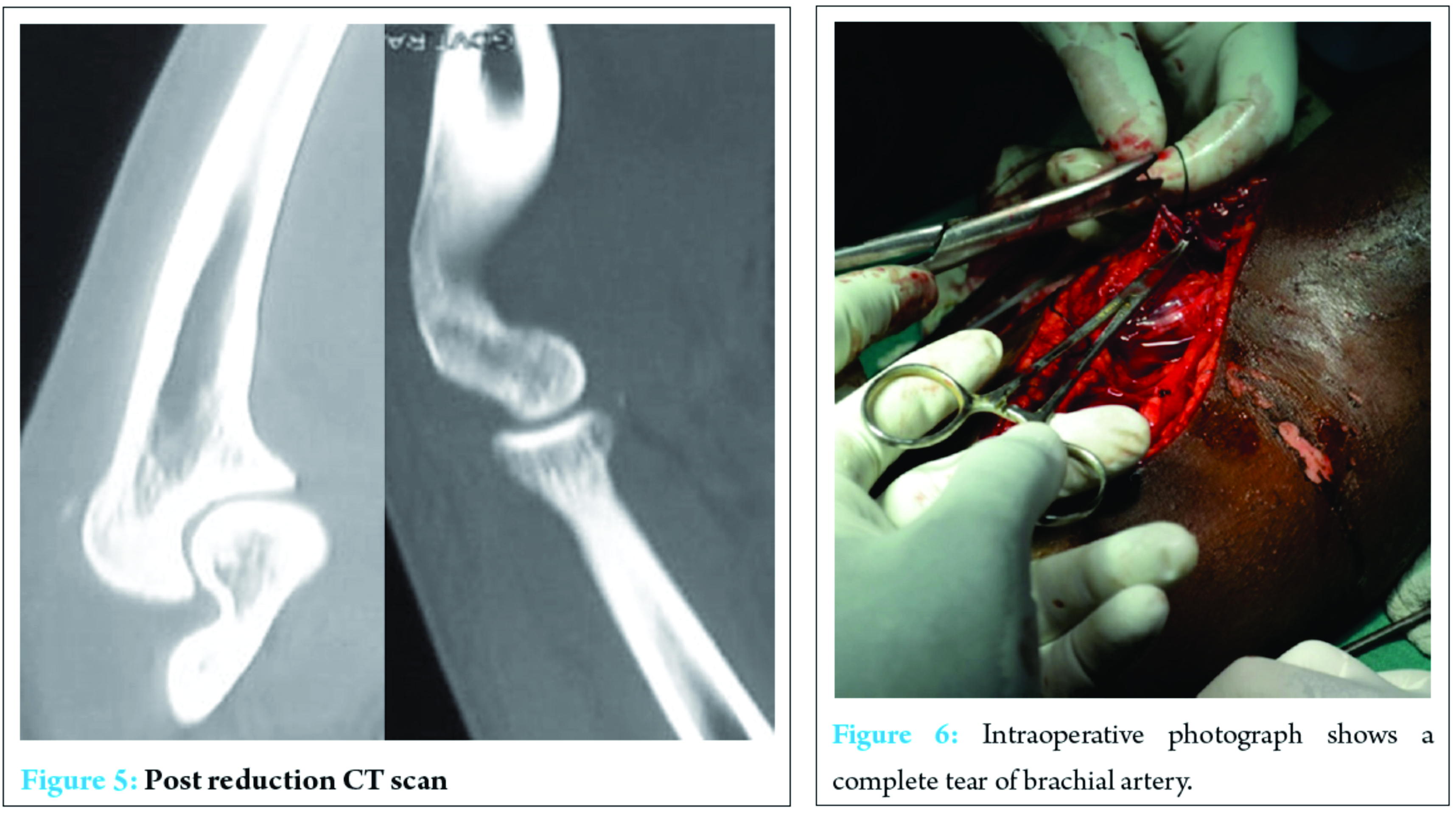 Management
Closed reduction was done under intravenous sedation in the minor operating room, and the elbow joint was found to be stable post reduction. The reduction maneuver being traction at wrist and counter traction at the arm, mild flexion and posterior displacement of forearm. The postreduction radiograph (Fig. 4) and computed tomography (Fig. 5) showed congruent reduction. This was done immediately following closed reduction. As there was severe swelling and the distal vascularity insufficient, an attempt of closed reduction was done before the vascular surgeon assessed the limb vascularity, in the idea to reduce the ischemia time and that the compression of the neurovascular structures by the dislocated bony parts, could be temporarily relieved by closed reduction of the elbow joint before contemplating over open reduction or any vascular procedure.

After reduction, radial pulse was still absent and vascular surgeon assessment revealed clinically absent distal pulses but monophasic flow in radial artery on a hand-held Doppler probe showing no significant improvement in the vascularity of the limb even after closed reduction. A primary exploration of the brachial artery was planned. Intraoperatively, the brachial artery was found to be lacerated (Fig. 6). Long saphenous vein was harvested from the ipsilateral leg and used as a bypass graft at the injured level of brachial artery. The posterior interosseous nerve was found to be intact but with a minimal contusion. In addition, a prophylactic fasciotomy (Fig. 7) of the forearm was done.

The limb was immobilized in an above elbow slab with 90° flexion and forearm in mid-prone position. Split skin graft was done for the fasciotomy wound 1 week later. Limb was immobilized (Fig. 8) for 3 weeks and active mobilization started thereafter. At 3 months follow-up, there was complete recovery of wrist and finger movements. The elbow range of movement was from 0° to 100° (Fig. 9 and 10).

Discussion
Anterior elbow dislocation is among the rarest of injuries in contrast with posterolateral elbow dislocation which is one of the most common [4] among dislocations. The anterior type most often occurs with the fracture of olecranon [2, 5]. Anterior dislocation per se is produced by direct trauma to the proximal ulna after a fall on the elbow in mid-flexion, often associated with significant soft tissue injury [5]. The soft tissue structures around the elbow that act as stabilizers can be considered in the form of a closed ring [6]. The trochlear notch surrounds almost 180° of the trochlea, accounting for a large part of the stability of the elbow joint. The ulnohumeral articulation has been shown to be the most important stabilizer of the elbow joint. The posterior column, the disruption of which would be a prerequisite for anterior dislocation, is formed by the olecranon, the triceps, and the posterior aspect of the capsule [6]. This explains why these type of injuries has much rare occurrence, more so with neurovascular involvement. This is a case of closed anterior dislocation of the elbow with neurovascular injury. Anteroposterior and lateral X-rays of the elbow along with clinical examination are sufficient for diagnosis. In the case of vascular injury, investigations like color Doppler and arteriography help to find identify the type of injury and plan further management. The reduction manoeuvre is the reverse of posterior dislocation; gentle traction is first applied to the forearm to relax the muscle spasm. Posterior and downward pressure is then applied to the forearm with gentle anterior pressure on the posterior aspect of the distal humerus. After reduction, a careful neurovascular examination must be done. The triceps insertion may be injured [2] in this type of dislocation and can be assessed by active extension of the elbow. The elbow is splinted in slightly <90 of flexion, depending on the amount of swelling and the status of triceps. If found associated with olecranon fracture, open reduction with rigid fixation should be done for adequate stability. Very few reports present anterior dislocation of the elbow. Most authors recommend accelerated functional treatment of elbow dislocation, as long period of immobilization have not been found to be of any benefit [7, 8, 9].

Conclusion
Anterior dislocation of the elbow joint is very rare, occurs due to direct trauma to dorsum of forearm in a semi-flexed position. It is an orthopedic emergency. Early proper diagnosis and concentric reduction of the joint is key for normal functional outcome of joint and prevention of any deformity.

Clinical Message
Although anterior dislocation of the elbow is a rarity in occurrence, high index of suspicion has to be in mind in a patient with direct injury to elbow in mid-flexed posture. Even though the injury is predominantly closed, there is a high incidence of associated soft tissue and neurovascular injury. Early detailed evaluation and management are essential for an optimal functional outcome. 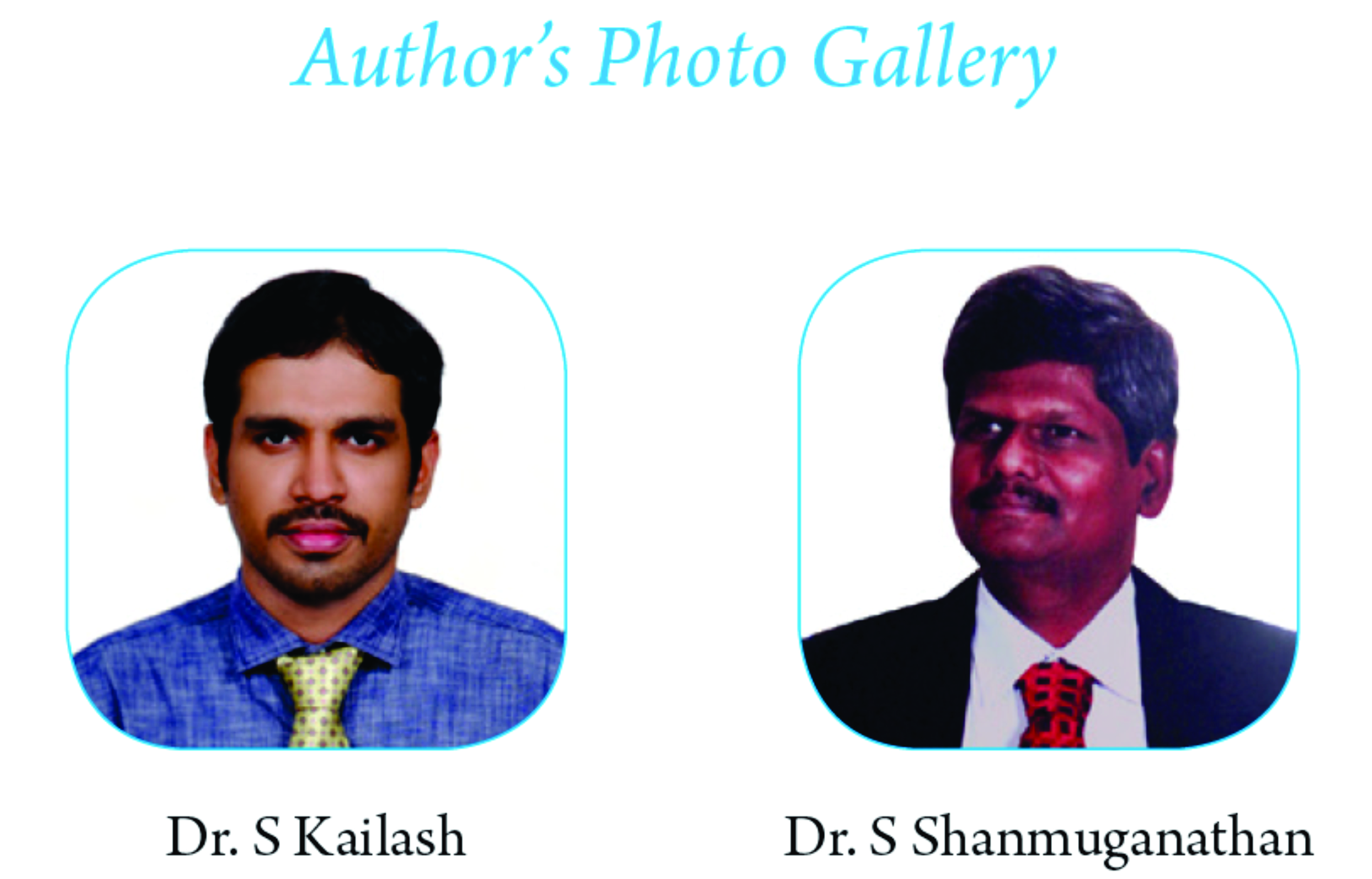 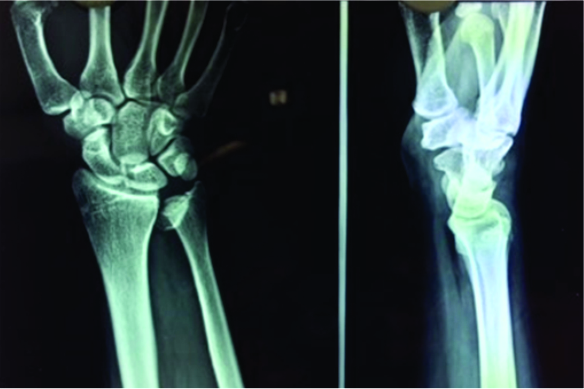 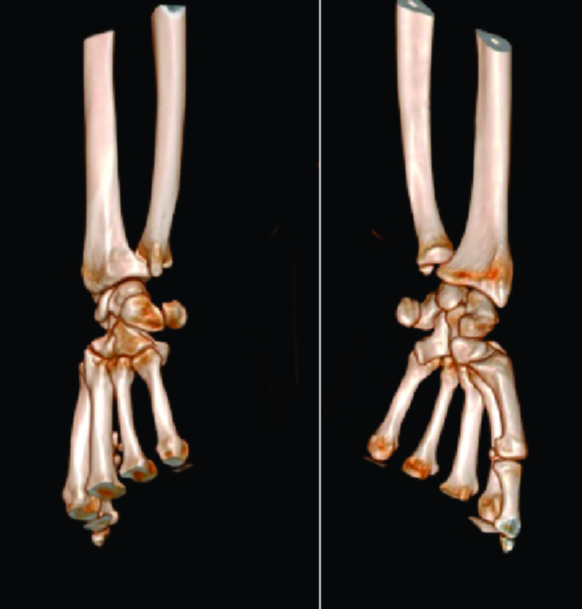 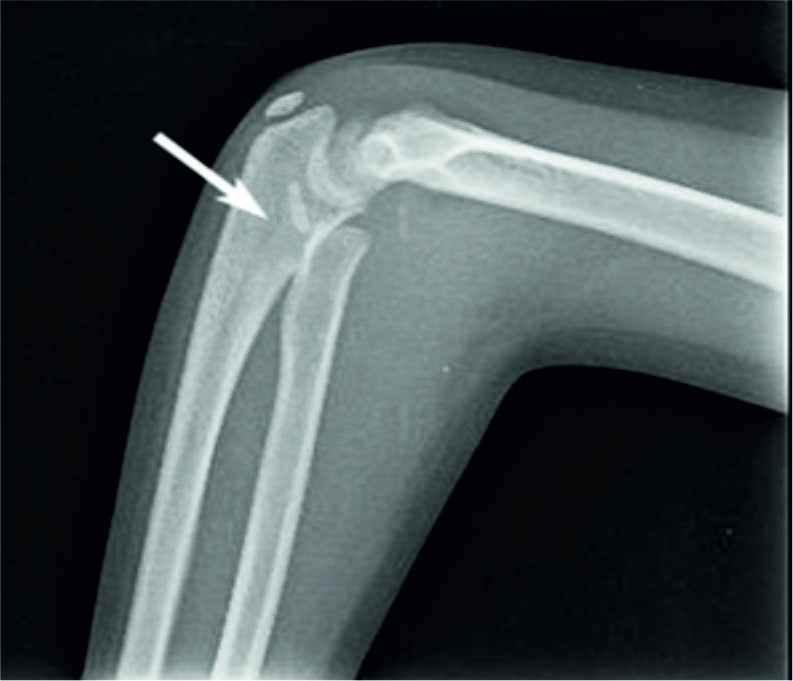 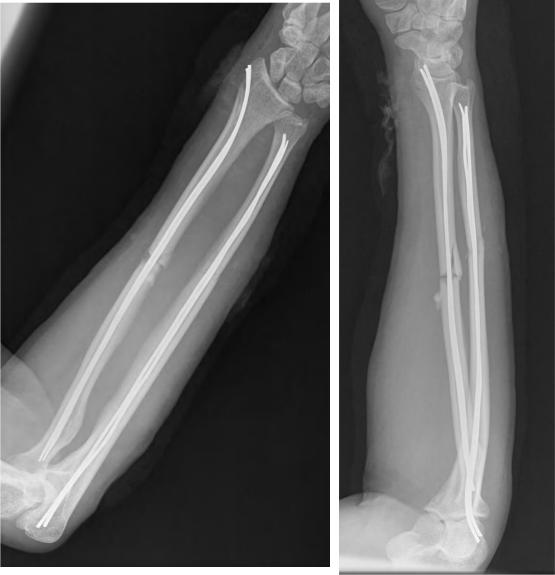