The treating clinician should be aware of possibility of concomitant ipsilateral distal tibial physeal injury in adolescent spiral tibial fracture.

Introduction: Triplane fracture is a rare adolescent ankle injury. Its association with ipsilateral tibial shaft fracture is very rarely reported in the literature.
Case Report: This is a case of a 14-year-old male who sustained a twisting injury to his right leg after a fall from a height. He sustained a minimally displaced spiral fracture of the mid-shaft of his right tibia with a concomitant ipsilateral two part triplane fracture of the ankle. He underwent minimally invasive percutaneous locking plate fixation for tibial fracture and percutaneous screw fixation for an ankle fracture. Both fractures healed uneventfully in 10 weeks with complete functional recovery in 12 weeks.
Conclusion: The ankle injury, in such cases, can easily be missed in the presence of the more obvious tibial fracture and emergency physicians should also be aware of such injuries. As this injury is peculiar to the adolescent age group, we recommend ankle assessment of all patients with tibial shaft fractures in this age group.
Keywords: Triplane, ankle, tibia, fracture, concomitant.

Triplane fracture of the ankle is a known injury occurring in adolescents due to asymmetric closure of the distal tibial epiphysis [1]. It is a period of around 12-18 months when the distal tibial physis closure progresses from central to medial and then to the lateral side. During this time, the physis is vulnerable to shear forces across its unfused anterolateral part which is the last to fuse [2]. Unlike adults, concomitant ankle injury with ipsilateral fracture of the tibia in adolescents is less reported in literature [3]. This paper aimed to report this unusual pattern of adolescent lower limb injury postulate the mechanism of injury.

Case Report
The authors have obtained the patient’s informed written consent for print and electronic publication of the case report. We report a case of a 14-year-old adolescent male who sustained a twisting injury to his right leg after a fall from a height of approximately 3-4 feet. The mechanism was a twisting injury with internal rotation of the leg over a dorsiflexed ankle with the foot firmly fixed on the ground. He sustained a minimally displaced spiral fracture of the mid-shaft of his right tibia and fibula with a concomitant triplane fracture of his right ankle (Fig. 1, 2, 3). The ankle injury was initially missed in the accident and emergency department. Besides, the initial swelling in the leg warranted close monitoring to rule out impending compartment syndrome. The radiographs were revisited the next day by the orthopedic trauma team, and an urgent computed tomography (CT) scan revealed a 3 mm displaced intra-articular two-part triplane fracture of the ipsilateral distal tibia (Fig. 4 and 5). The triplane fracture was treated by percutaneous cannulated cancellous screw fixation. The tibial fracture was minimally displaced and treated with medial minimally invasive percutaneous 3.5 mm locking plate fixation (Fig. 6 and 7). The patient was given a long leg cast for 2 weeks. Knee and ankle range of movement exercises were started immediately thereafter. Partial weight bearing commenced at 6 weeks and progressed to full weight bearing at 10 weeks. The fractures healed clinically and radiologically at 10 weeks with complete functional recovery in 12 weeks.

Discussion
The most common mechanism of triplane ankle fracture is external rotation of the foot or internal rotation of the leg over a fixed and well grounded foot [1]. Similarly, spiral fractures of the tibial shaft are also caused by rotational force. We postulate that the initial failure in this combination of injuries would be the spiral or short oblique fracture of the tibia as the twisting force passes longitudinally along the length of the bone. Although most of the energy from the axial and angular force created would be dissipated at the tibial fracture, the continued rotational force transmitted distally to the ankle would still be severe enough to fracture the weak and vulnerable unfused distal tibial physis causing this unique pattern of triplane fracture. The presence of spiral or short oblique fractures of the tibia in all the reported cases supports this mechanism of injury [4, 5]. Conversely, in this case, the ankle fracture could have had preceded the tibial fracture, but we believe that if this was the case, it would have caused more displacement of the ankle triplane fracture fragments as the majority of the force dissipation would have occurred early at the site of this initial ankle failure. Less residual energy would have remained failing to create a tibiofibular fracture or it would have caused, at most, a minimally displaced and a non-multifragmented fracture pattern of the tibia. We also believe that this combination of fractures would require more energy than isolated injuries. This pattern of concomitant ankle injury associated with tibial shaft fractures in children is seldom described. We performed an English literature search in PubMed database using triplane fracture and concomitant tibia fracture as search criteria. Jarvis et al. published a series of six cases of similar injury in 2001 [4]. All fractures were undisplaced or minimally displaced except one (triplane fracture with displacement of 3-4 mm) and were amenable to conservative treatment with in situ cast. Two patients had delayed diagnosis (1 and 3 weeks). All patients were treated conservatively in molded long leg casts initially applied without anesthesia. These were changed to patellar tendon bearing casts for 8-10 weeks. The recurvatum deformity after healing averaged 4.5°. Although the authors do not mention the reason for treating the displaced triplane fracture conservatively, the outcome was presumably satisfactory. De Rover et al. also reported a case of similar fracture without the involvement of the fibula in 2011 [5]. This injury was treated operatively with good result. In this case, the minimally displaced tibial fracture accompanied by undisplaced fibula fracture and the displaced intra-articular triplane fracture made operative treatment imperative [6]. Percutaneous fixation of the triplane fracture involved cannulated screws transfixing the physis as we believe that at adolescent age growth potential remaining in the distal tibial physis is very minimal. Besides, the physeal injury itself can cause growth arrest but leg length discrepancy is arising from it is very minimal [7]. The ankle injury in these types of cases can easily be overlooked in the presence of the more obvious tibial fracture, as happened in the case described. We recommend that the examining clinician should have a very low threshold to assess and investigate ankle injuries in adolescent patients with tibial shaft fractures. CT scan is useful to determine the displacement of the fracture fragments and aid in formulating the treatment plan [8]. These injuries when missed can lead to articular incongruity causing early traumatic arthritis [9].

Conclusion
This case highlights a unique pattern of the lower limb injury in the adolescent age group. One should have a very low threshold to assess and investigate further potential ankle injuries as any delay in the diagnosis and treatment can result in a suboptimal outcome.

Clinical Message
We recommend that all adolescent patients with spiral tibial fracture have ipsilateral ankle assessment to rule out distal tibial physeal injuries. 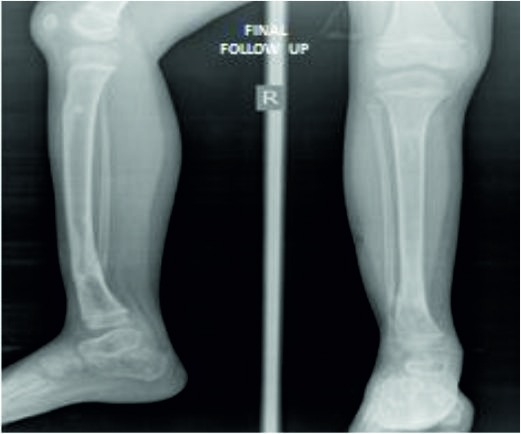 Dedifferentiated Chondrosarcoma of Proximal Tibia and Fibula with an Infected Ulcer: A Case Report...

Adamantinoma of the Tibia: A Case Report...

Adamantinoma of the Tibia: A Case Report...