Introduction: Cerebrotendinous xanthomatosis (CTX) is a rare autosomal recessive lipid storage disease caused by mutations of the CYP27A1 gene and deficiency of the sterol-27-hydroxylase enzyme in bile acid biosynthesis. It is characterized by the accumulation of cholestanol and bile alcohols in plasma, the formation of xanthomatous lesions in various tissues, and organ degeneration. This disorder is also associated with osteoporosis and increased risk of fracture. To date, only two CTX patients with femoral neck fractures have been reported. Neither was treated by arthroplasties, and the operative outcomes are lacking.
Case Report: We report the case of a 46-year-old Thai female who presented with consecutive bilateral femoral neck fractures following minor trauma within a 3-year period and received cementless bipolar hemiarthroplasties. Her phenotypic expression included Achilles tendon masses, childhood-onset cataracts, intellectual disability, and cerebellar ataxia. A brain computed tomography showed non-enhancing hypodense lesions in the bilateral cerebellar hemispheres with mild brain atrophy. Histopathology from an Achilles tendon biopsy revealed tendinous xanthoma and molecular analysis confirmed a homozygous nonsense mutation, c.1072C>T (p.Gln358Ter), in exon 6 of the CYP27A1 gene. The intra-operative crack of a calcar femorale was a major complication during both prosthetic insertion surgeries and warranted cerclage wiring. At the 7-month follow-up of the right hip and the 41-month follow-up of the left hip, postoperative radiographs showed well-fixed and well-aligned prostheses. Independent household ambulation could be resumed with Harris hip scores of 81 points equally.
Conclusion: CTX is associated with osteoporosis, and middle-aged patients could present with femoral neck fracture following minor trauma. Cementless bipolar hemiarthroplasty for a totally displaced fracture is justified for a patient who has cognitive impairment. Intra-operative fracture is a major complication during prosthetic insertion and warrants cerclage wiring to achieve predictable bone healing and a satisfactory result.
Keywords: Cerebrotendinous xanthomatosis, femoral neck fracture, hip arthroplasty.

Introduction
Cerebrotendinous xanthomatosis (CTX) is a rare inborn error of lipid metabolism, inherited in an autosomal recessive pattern. The estimated incidence ranges from 1:134,970 to 1:461,358 in Europeans, 1:71,677 to 1:148,914 in Americans, and 1:64,267 to 1:64,712 in East Asians [1]. It is caused by mutations of the CYP27A1 gene leading to an absence of the sterol 27-hydroxylase enzyme with a bile acid synthesis defect and cholestanol accumulation in serum and tissues in multiple organs, called xanthoma [2]. The clinical manifestation is typically characterized by bilateral cataracts and diarrhea in childhood and progressive neurological dysfunction and tendon xanthoma in early adulthood [3]. Some investigators have described the association between CTX and osteoporosis that causes a higher risk of fracture after low-energy trauma [4]. Their hypotheses involved Vitamin D deficiency and intestinal calcium malabsorption. To date,<20 patients with CTX who suffered fragility fractures have been reported [4, 5]. Among these, only two patients with femoral neck fractures have been studied, and the operative outcomes with this particular disease are lacking. Here, we present a case of a CTX patient who sustained consecutive bilateral femoral neck fractures, as well as some reviews of the latest literatures.

Case Report
A single 46-year-old Thai woman presented with acute right hip pain after falling onto the ground and could not bear weight. Her underlying diseases were hypertension and mild intellectual disability (IQ=60). At the age of ten, she developed bilateral cataracts and underwent bilateral intraocular lens replacement at the age of about 20. Thereafter, a painless mass gradually developed at the medial side of the left foot and both Achilles tendons became enlarged. At the age of 43, she sustained a left femoral neck fracture owing to a fall in her home and underwent hip hemiarthroplasty (Fig. 1a and b). Her ambulatory status was household independence. A physical examination revealed a thin woman (height 153 cm, weight 38 kg) with her right lower limb in the external rotation position. The left posterior tibial tendon insertion and both Achilles tendons were enlarged in irregular shapes (Fig. 2 a-c). Pes cavus in both feet and camptodactyly of her left little finger were observed. The hip radiographs showed a complete, totally displaced, transcervical fracture of the right femur, Garden classification Type 4 (Fig. 3). The proximal femur appearance was categorized as Dorr Type B. Retention of the well-fixed cementless bipolar prosthesis in the left hip was found. Other bone-surveying radiographs of spine, pelvis, and femurs revealed generalized osteopenia. She underwent hip hemiarthroplasty using a posterolateral approach and a cementless bipolar prosthesis (Avenir Muller stem, Zimmer, Switzerland). There was an accidental crack of the calcar femorale during the stem insertion. A loop of cerclage wiring was then added to prevent fracture propagation. The posterior capsule and short external rotators were repaired. The operative record of the left hip hemiarthroplasty also noted a calcar femorale fracture during the prosthesis insertion warranting cerclage wiring. Cementless bipolar prosthesis (Modular Taperloc stem, Biomet, USA) had been implanted through a posterolateral approach. 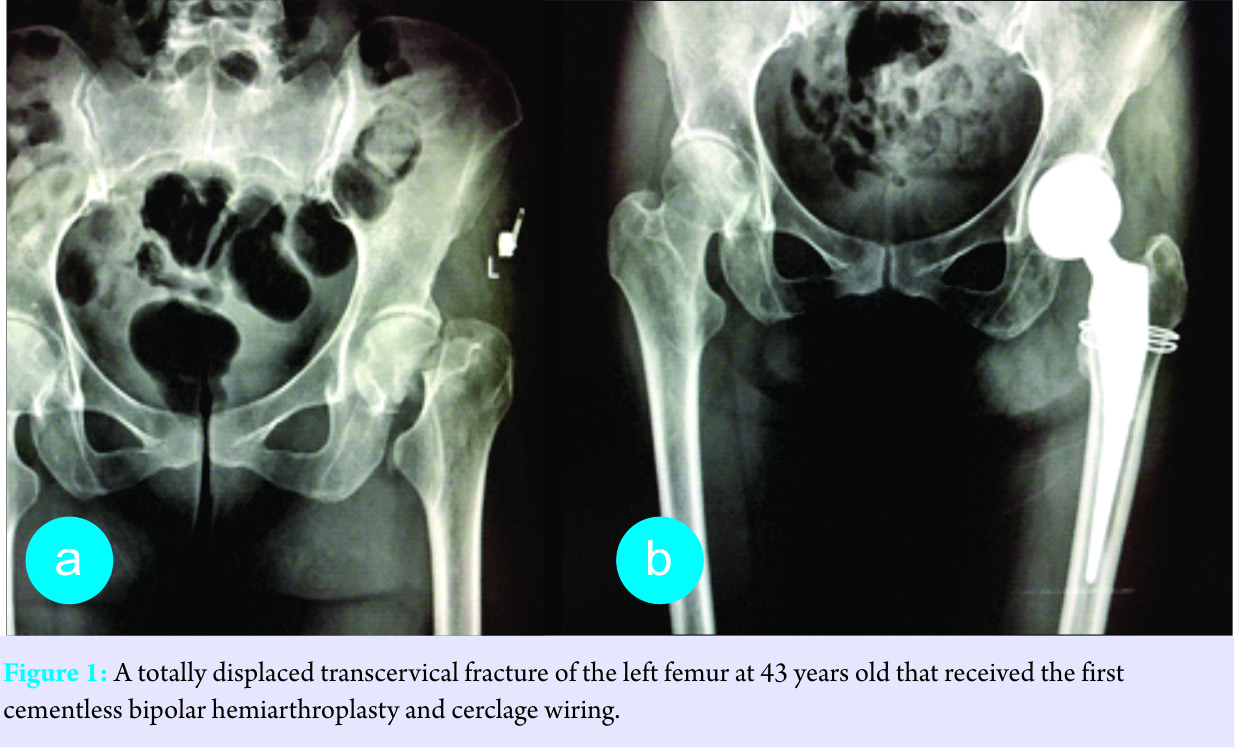 Since these clinical findings were largely in line with CTX, investigations for a definitive diagnosis were undertaken with patient consent. An Achilles tendon biopsy was performed, and histopathology confirmed tendinous xanthoma, characterized by lipid crystal clefts surrounded by foamy histiocytes and multinucleated giant cells. Electrocardiography and a chest radiograph were unremarkable. Serum cholesterol, alkaline phosphatase, calcium, phosphorus, and magnesium levels were normal. Testing for serum cholestanol level was not available in our laboratory. Neurological evaluation found good motor function and mild cerebellar ataxia. A brain computed tomography (CT) showed non-enhancing hypodense lesions in both cerebellar hemispheres, with mild cerebral and cerebellar atrophy (Fig. 4). Mutation analysis in the CYP27A1 gene was investigated by extraction of the genomic DNA from peripheral blood leukocytes and sent for singleton whole-exome sequencing analysis. The sequencing libraries were enriched by SureSelect Human All Exon V5 kits and sequenced using IlluminaHiSeq 4000 Sequencer. The data were mapped to the human GRCh37/hg19 reference sequence using CASAVA v1.7 (Illumina) followed by variant calling with SAM tools and annotated by ANNOVAR to generate gene-based annotation. A homozygous c.1072C>T (p.Gln358Ter, rs533885672) stop-codon mutation in exon 6 of the CYP27A1 (NM_000784.3) was identified in the patient. The family pedigree was plotted, and no consanguinity was found. Parental blood samples were not available.

She was prescribed oral calcium carbonate with Vitamin D2 for osteoporotic prophylaxis and allowed partial weight bearing for 6 weeks. The hip radiographs at the latest follow-up (post-operative 7 and 41 months for right and left hips, respectively) showed well-fixed and well-aligned femoral prostheses (Fig. 5a-c).The right leg was found to be 5 mm shorter. A CT scan of both hips and femurs demonstrated 12° and 15° anteversion of right and left femoral stems, respectively. The native acetabular anteversion was 23°. She occasionally had slight pain in both hips but no compromise in activity. She could stand without support and walk with a slight limp for 10–15 minutes. She was capable of going up or down stairs with handrails. Both hip joints had a full range of movement with Harris hip scores of 81 points equally. 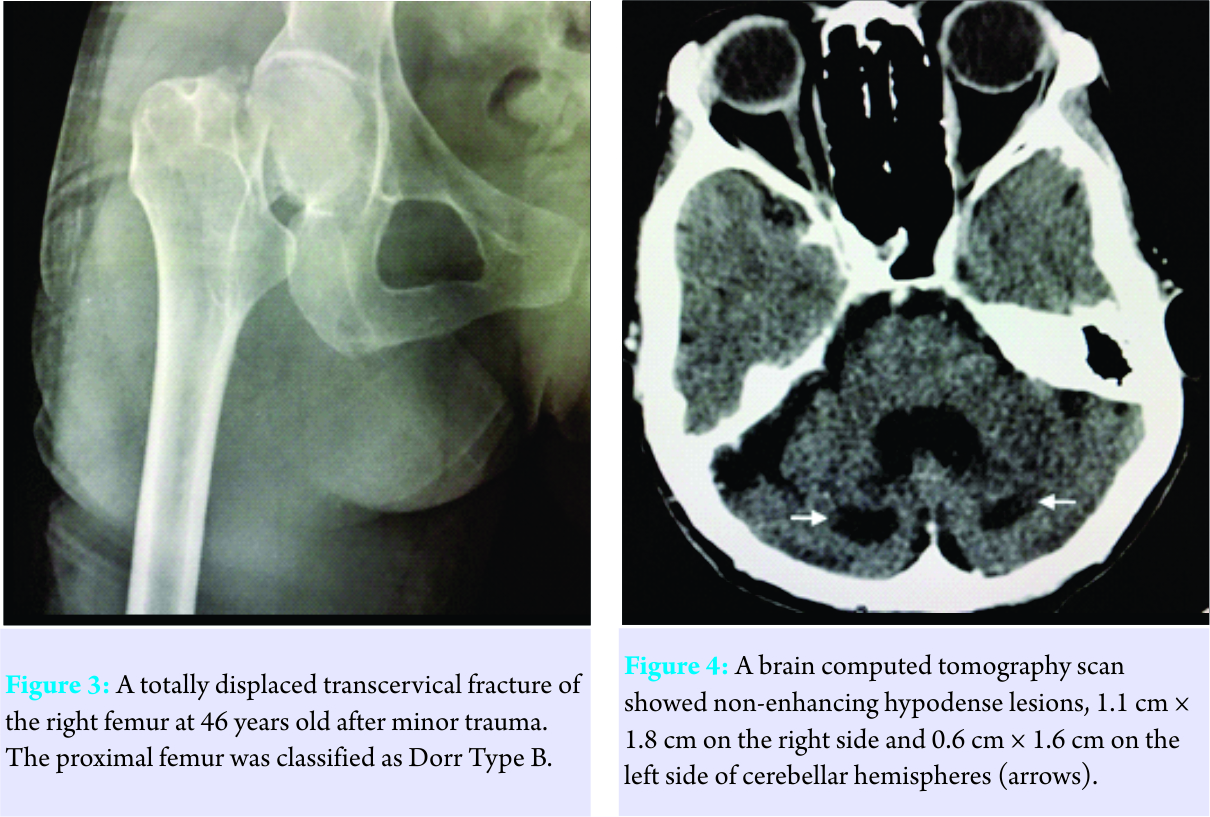 Conclusion
CTX is associated with osteoporosis, and middle-aged patients could present with femoral neck fracture following minor trauma. Cementless bipolar hemiarthroplasty for totally displaced fracture is justified for patients who have cognitive impairment and provides satisfactory results. Intraoperative fracture is a major complication during prosthetic insertion and requires cerclage wiring to achieve predictable bone healing. Moreover, we expand the mutational spectrum of CTX to include a homozygous nonsense mutation, c.1072C>T (p.Gln358Ter), in exon 6 of the CYP27A1 gene. 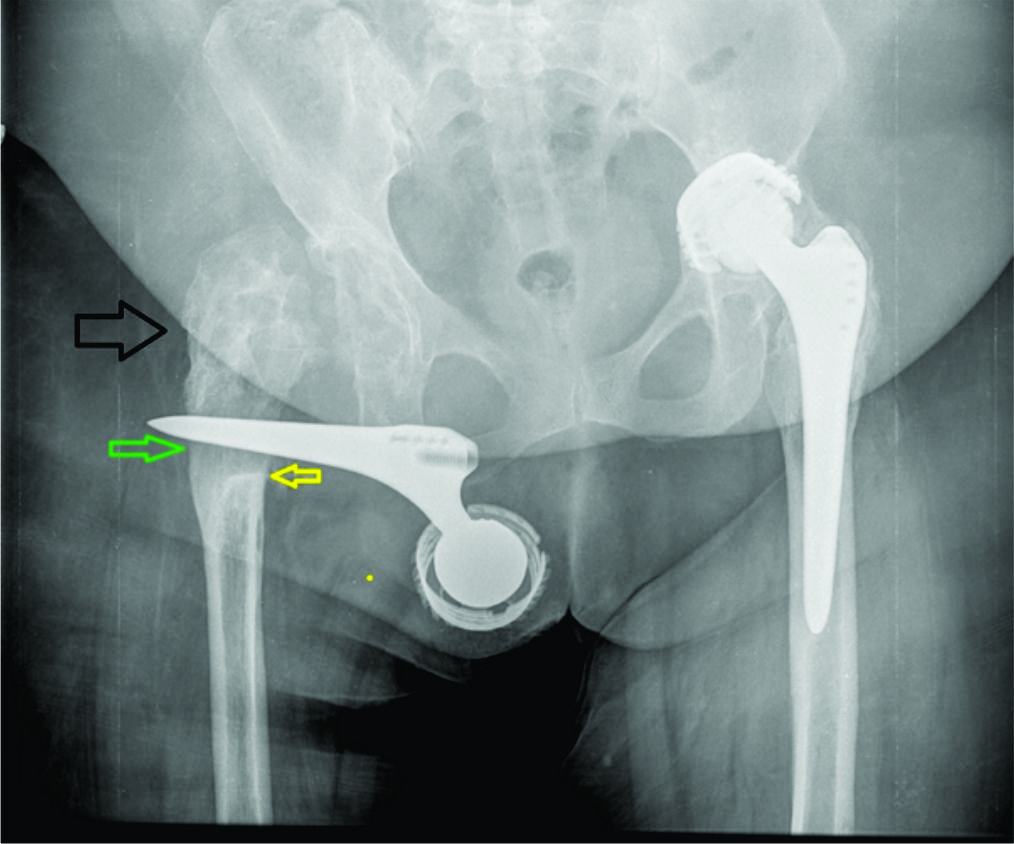 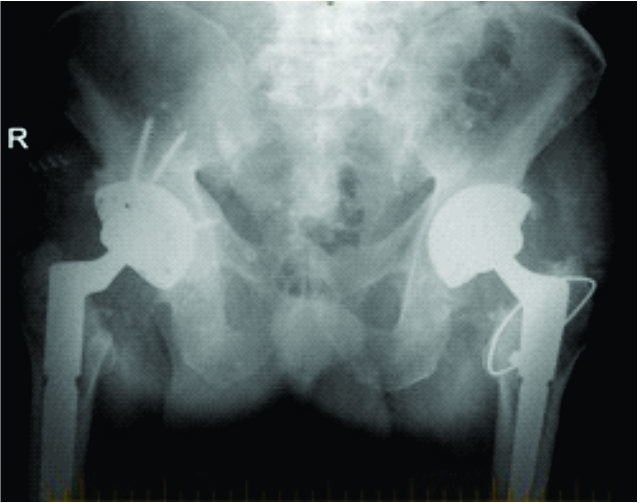 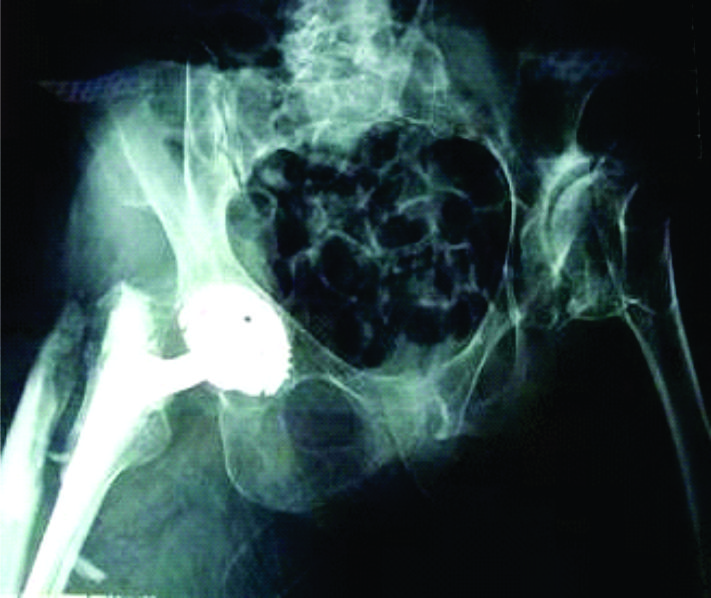