In the presence of a tibial cyst associated with ACL reconstruction, always suspect communication of the cyst with the knee joint. The treatment must consider this possibility and must be aggressive in order to avoid recurrence.

Introduction: Anterior cruciate ligament (ACL) reconstruction is a “daily” surgery. Nevertheless, pretibial cyst formation is a very rare complication and may appear years after the reconstruction. Even more infrequent is the recurrence of this complication.
Case Report: We present a patient who developed a pretibial cyst 44 months after an ACL reconstruction and who underwent three open surgeries due to recurrence. Up to date, there are no symptoms or signals of cyst recurrence after 18 months of follow-up.
Conclusion: Initial surgical resection might have failed due to insufficient surgical treatment. In case of suspicion of articular communication, we consider that the correct treatment is the resection of the cyst, proper curettage of the tunnel walls and a thorough filling of the space with bone graft. This course of treatment may avoid a recurrence.
Keywords: Anterior cruciate ligament reconstruction, pretibial cyst, complication, recurrent.

Introduction
Anterior cruciate ligament (ACL) reconstruction is a “daily” surgery and has been improved through time with new surgical techniques and new materials. Bioabsorbable interference screws have gained ground over the classic metallic screws due to better post-operative imaging and decreased risk of graft laceration. However, new complications have appeared such as pretibial cyst formation. This is a very rare complication, but it has already been described in the literature. Nevertheless, it may appear years after the reconstruction. Even more unfrequent is the recurrence of this complication.

Case Report
In May 2011, a 34-year-old male was treated for an ACL rupture using a hamstring graft fixation associated with a partial internal meniscectomy. The hamstring grafts were fixated using a transfixation system in the femur and a biodegradable screw in the proximal tibia. The patient’s post-operative course was uneventful, and he returned to sports without further difficulties. In July 2014 (3 years and 6 months following the initial operation), a tibial cyst suddenly presented and was first treated conservatively, including physical therapy and non-steroidal anti-inflammatory drugs, until it became symptomatic. There were no signs of clinical or laboratory infection. Magnetic resonance imaging (MRI) showed a 10 mm × 25 mm cyst lesion filled with liquid (Fig. 1).

In November 2014, an open excisional biopsy and primary closure surgery were performed at a different medical center. The material was sent to a pathology laboratory and resulted in a “ganglion cyst.” 2 months after surgery, a painful mass recurred over the anteromedial proximal tibia measuring approximately 10 mm × 25 mm. A gelatinous substance was suctioned from the mass, in a sterile environment, consistent with a recurrent ganglion cyst. 40 days following this event, the cyst had reappeared and measured approximately 50 mm × 40 mm (Fig. 2). At that time, the patient was referred to our hospital.

The physical examination revealed a stable knee and a complete range of motion. An approximately 50 mm × 40 mm palpable mass was evident at the anteromedial proximal tibia. MRI images were consistent with a homogeneous, fluid-filled cyst with a connection toward the tibial tunnel (Fig. 3).

On April 2015, a second open resection and an exploratory arthroscopy were performed. The cyst was approached through the previous skin incision. The mass was meticulously dissected, with care not to injure the cyst or its stalk. After the cyst was isolated from the surrounding soft tissue, it was brought back to its original placing at the tibial tunnel. The cyst and stalk were then excised altogether. Once removed, the tunnel showed no evidence of communication with the joint and the walls showed signs of sclerosis. Walls were debrided with a rongeur and curette and filled with bone plugs extracted from the lateral femoral condyle. Graft was impacted, and fascia and subcutaneous tissue were sutured. The pathology report revealed a fibrous tissue capsule compatible with a synovial cyst (Fig. 4).

The patient remained asymptomatic for 3 months, but when he returned to sport activities, a painful palpable mass was evident again in the same site. Like previous episodes, no clinical or laboratory parameters of infection were found. The X-ray and MRI revealed a new cyst recurrence, with an increase in the tunnel size compared to the previous episode.

Bone blocks were evident within the cyst (Fig. 5). A third surgical intervention was performed. After the cyst was isolated from the surrounding soft tissue, the three bone plugs were found inside the tunnel and extracted, and the tunnel walls were filled with fibrous tissue. A proper debridement was performed with a curette, and the space was filled using a cancellous allograft and a cortical allograft table (Fig. 6).

The last follow-up at 18 months post-operative has shown the patient asymptomatic, practicing sports regularly, and from an iconographic point of view (Fig. 7), a good integration of the bone graft both at the cancellous and cortical side. As shown in the MRI images, the ACL has still survived with good signal and without any modification since the first surgery.

Discussion
Among complications following ACL reconstruction, the formation of a pretibial cyst in the site of the tibial tunnel is very rare and may happen even years after surgery [1, 2, 3]. The etiology of pretibial synovial cyst is not clearly described in current literature and recurrences are quite infrequent [4, 5, 6, 7, 8, 9]. Gonzalez-Lomas et al. [10] reported in 2011, 7 cases with pretibial cyst. The average time between surgery and the appearance of the cyst was 2 years. In all of them, a biodegradable poly-L-lactic (PLLA) screw was used. Allografts were used in four cases and hamstrings in three. After a simple excision of the cyst, fragments of PLLA screw surrounded by histiocytes were found. They concluded that cyst formation was due to remnants of PLLA. Recurrence is very rare, and an incomplete resection or curettage may cause a new episode. Sekiya et al. [11] submitted in 2004, a case report of a patient with two recurrences. The initial formation of the cyst was 5 years after ACL reconstruction and the fixation used was a biodegradable screw with a hamstring graft. The procedure for cyst excision was a simple resection and closure of the fascia, and the histological study found suture remains. 1 year after the excision, the cyst recurred and was drained by aspiration. The second recurrence was 3 months later. On that occasion, they performed a larger curettage of the cyst removing remnants of the walls of the tunnel and suture. Again, the histological study showed remnants of non-biodegradable suture. This author did not fill the cavity with bone graft, suspecting the etiology of the cyst to be a foreign body reaction. Ghazikhanian et al. [3] stated in a literature review that the placement of bone graft in the tunnel can be very important to reduce the risk of recurrence, especially when cysts, is suspected to be communicant. No author described an association of this complication with graft loosening. In our institution, we perform about 200 ACL surgeries per year. During 2008–2016, 14 patients with pretibial cyst were intervened over this complication. Although we believe the etiology to be multifactorial, cysts can be defined as communicating or non-communicating. This definition may help to determine the surgical treatment. The interesting thing about this case report is that it involves only one patient who developed a recurrence and required three surgeries for a definitive treatment. We believe it was a communicating cyst. The first procedure performed at another medical center (simple excision and closure) was insufficient. The second surgery, though we provided bone graft from the lateral epicondyle, was not enough to fill the cyst tunnel, and may have been the reason for its reoccurrence. Performing a proper curettage of the walls and filling the cyst with bone allograft was necessary for a correct sealing and, up to date, a definitive treatment.

Conclusion
We presented a very unusual case of a pretibial cyst that recurred 3 times and required three surgeries for a definitive treatment. Initial surgical resection might have failed due to insufficient surgical treatment. The correct treatment in case of articular-communication suspicion is the resection of the cyst, proper curettage of the tunnel walls, and a thorough filling of the space with bone graft. This may avoid a recurrence.

Clinical Message
The formation of a pretibial cyst in the site of the tibial tunnel after an ACL reconstruction is a rare complication; however, the standard arthroscopic surgeon is not exempt from this pathology. It is important to be aggressive with surgical treatment to avoid recurrence of the cyst. 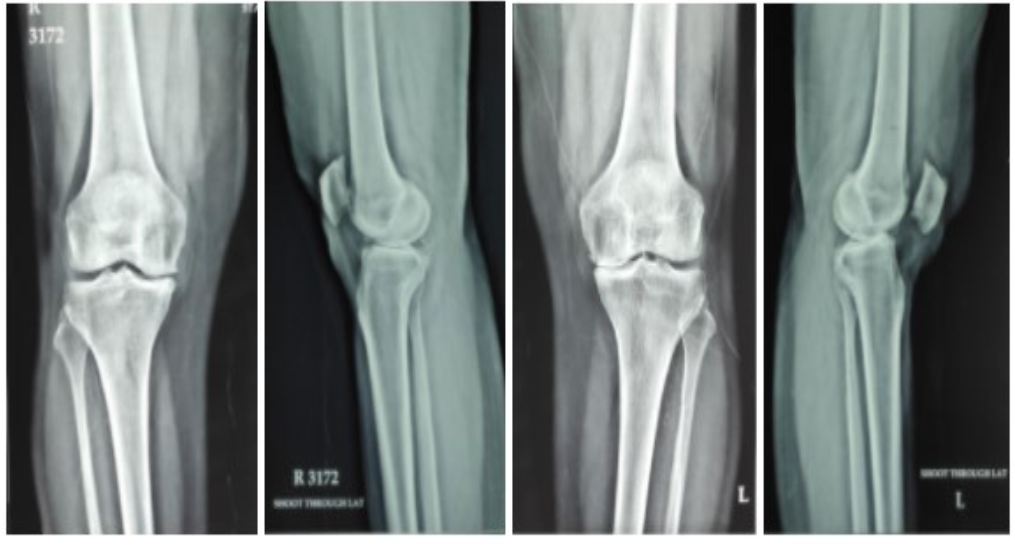 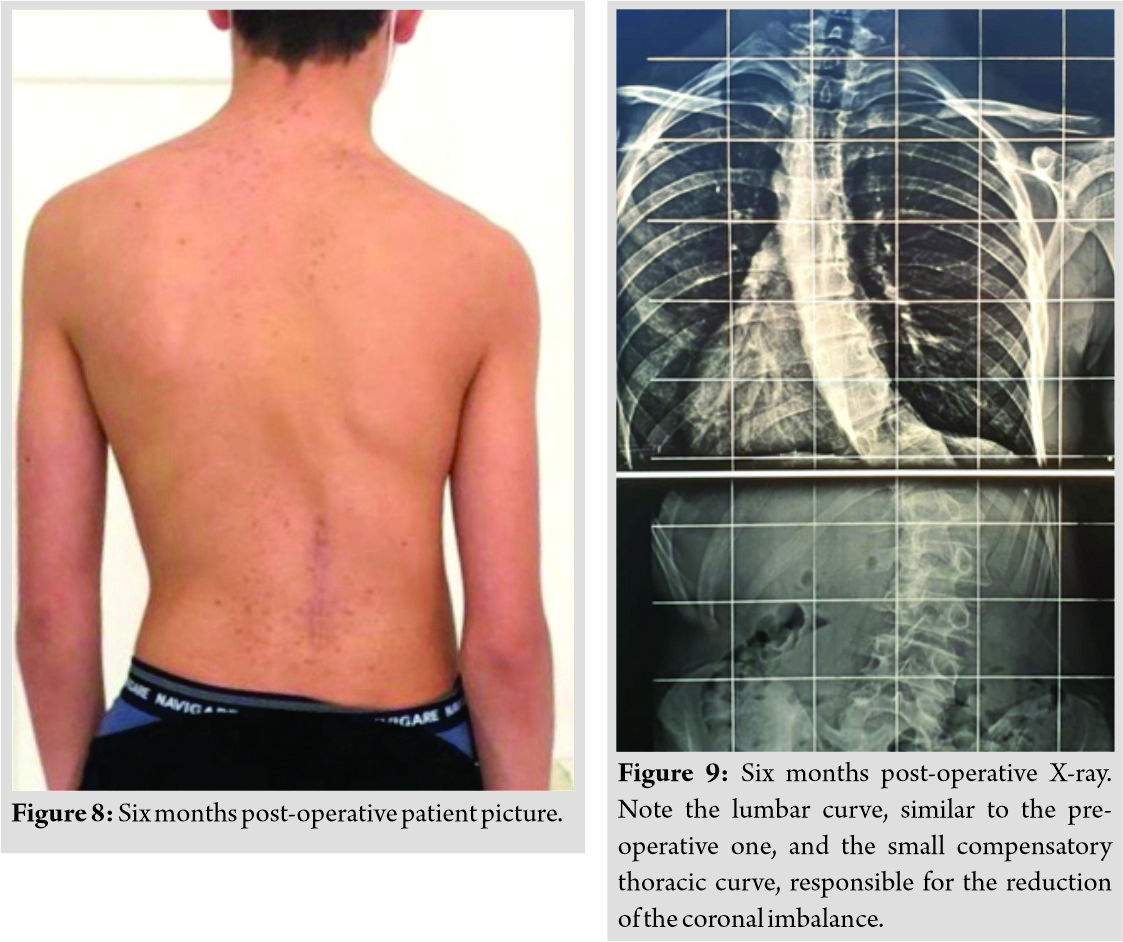 Thrombosis of the Superficial Femoral Artery following Fixation of Intertrochanteric Fracture of the...
Combined Fluoroscopic and Arthroscopic Detection and Removal of a Foreign Body Lost During Elective ...