Introduction: Acute hematogenous osteomyelitis (AHO) has been noted mainly in open fractures injuring soft tissue immunological defenses and in immuneincompetent patients. Osteomyelitis complicating closed fractures in immunocompetent adult patients is, therefore, a rare clinical entity with scarce literature.
Case Report: We report a case of primary Staphylococcus aureus bacterial infection of a closed, humeral shaft fracture occurring in a previously healthy 28-year-old male patient. The patient was involved in a motorcycle accident and was admitted to the surgical ward with a chest drain. While hospitalized, a peak of fever was noted, but no source was found. Diagnosis of the closed fracture infection was noted on primary open reduction and internal fixation (ORIF), and although the patient was treated with antibiotics, local osteomyelitis developed. Treatment including serial debridements utilizing gentamycin beads and an additional ORIF procedure until the full union was achieved. The patient regained full, painless, motion of the arm and shoulder.
Conclusion: Although AHO complicating a closed fracture in immunocompetent adults is very rare, it should not be overlooked, and special attention should be sought in such cases. Meticulous debridement and rigid fixation are utmost for the eradication of infection and fracture union. Patients presenting with such infections should, therefore, be followed closely and treated promptly.
Keywords: Closed fracture, osteomyelitis, Humerus.

Introduction
Trauma is often cited as a precipitating localizing factor in the pathogenesis of acute hetamogenous osteomyelitis (AHO) [1], but rarely occurring in the vicinity of acute traumatic fracture [2]. Although there are a few reported cases of AHO complicating closed fractures in the pediatric population [3, 4, 5], it is almost unheard of in immunocompetent adults. To the best of our knowledge, only two such cases of were previously reported [6, 7]. We would like to present a case where AHO was discovered during surgery in an acute, closed, traumatic humeral shaft fracture in a healthy adult.

Case Report
A 28-year-old, previously healthy archeological student was involved in a motor vehicle accident as a motorcyclist who slipped on an oil spill on an urban road. He was admitted to the trauma unit in our hospital. Urgent whole body computed tomographic scan revealed multiple injuries including a left lung contusion, hemothorax, fractures of the fourth to tenth left ribs, left scapular fracture and a left mid-shaft, and transverse humeral shaft fracture (Fig. 1a). The chest was decompressed in the emergency department with a chest drain; the humeral shaft was initially immobilized using a sugar tongue splint. The patient reported a medical history of smoking 10 cigarettes per day. 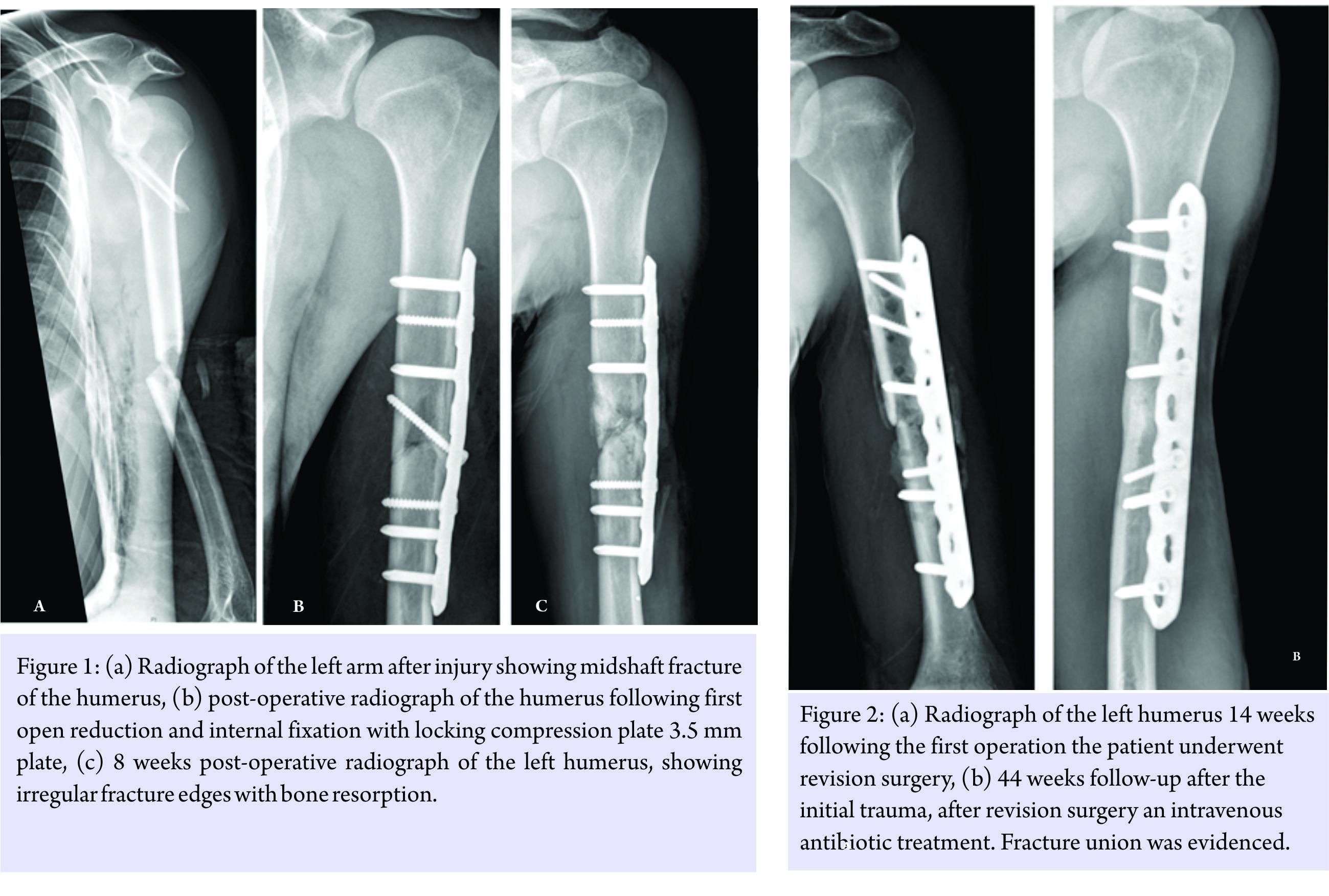 On the 6th day of admission, the patient developed a single spike of fever (38.9°C). Moreover, since there were neither upper-respiratory nor genitourinary findings on physical examinations or subjective complaints since there were no other complaints or physical finding, no treatment was initiated, but blood cultures were obtained. Blood count revealed mild elevation of white blood cells (13.6/103) with neutrophilia (77.1%) C-reactive protein (CRP) value was 2.6 mmol/L (local lab norm is 0.5–2.4 mmol/l).

Due to the fact that the patient had multiple injuries and the suboptimal alignment of his fracture, and after discussing with the patients the options of operative versus non-operative treatment, including faster rehabilitation, both the patient and the senior author decided to treat the humerus fracture operatively. At the 11th-day post-injury, the patient was taken to the operating room for open reduction and internal fixation (ORIF) of the left humeral fracture. An anterolateral approach was carried out. After incision of the brachialis muscle, a high amount of liquid pus poured out of the fracture site. Following culturing, meticulous, and extensive debridement of the fracture site and surrounding soft tissue was carried out; At this point – a decision was made to go on with the fixation of the fracture, to provide stability, necessary also to resist infection [8, 9, 10], taking the calculated risk of ongoing infection. Fixation was, therefore, done using a 4.5 mm locking plate (locking compression plate, Synthes, Solothurn, Switzerland) with a lag screw (Fig. 1b). Intravenous treatment with cefazoline 1 g was initiated and continued for 6 weeks. Intraoperative cultures were positive for methicillin-sensitive Staphylococcus aureus. At that point, blood cultures obtained during the single spike of fever had yielded the same organism. Following antibiotic treatment CRP value dropped from 2.6 mmol/l preoperatively to 1.77 mmol/l 9 days postoperatively. 8 weeks postoperatively the patient returned to the emergency room with a purulent discharge from his incision. An ultrasound of the surgical scar revealed a small 3*2.5*0.6 cm collection of fluid which was drained. With suspected ongoing infection, coupled with implant loosening (Fig. 1c) the patient was taken to the operating room for two consecutive debridements of gross infection with the insertion of gentamycin impregnated cement beads, which were later removed. 14 weeks after the index procedure, an antibiotic window was undertaken for 10 days, after which the patient was taken back to the operating room for repeat surgery, contemplating the removal of hardware as an interim measure followed by second stage ORIF. However, since the operative field did not show gross signs of infection, and most of the bone was viable, it was decided to go on with debridement of the bone ends and repeat ORIF using a longer plate in the mode of compression (Fig. 2a). Intraoperative cultures obtained during this procedure were still positive for the same microorganism. Therefore, antimicrobial treatment with intravenous cefazolin followed by oral suppressive antibiotics consisting of cloxacillin and rifampicin was administered for 3 months. On 44 weeks follow-up after the initial trauma; solid fracture union was evident both clinically and radiographically (Fig. 2b) with cessation of pain and full elbow and shoulder range of motion (Fig. 3) with no sign of infection.

Conclusion
We presented a unique case of an infected, closed humeral diaphyseal fracture discovered incidentally during surgery. To the best of our knowledge very few cases of AHO following closed fractures, have been previously described [6, 7, 11]. Most of the reported cases involving the long bones diaphysis were described in children and immunocompromised adults [11, 12].
While the source of infection in our patient remains unknown, we assume that it might have been evolved from the contused lung, chest drain insertion, or the multiple skin abrasions. The infecting organism, S. aureus is most commonly isolated from the skin and upper respiratory tract, and therefore these potential portals of entry seem to be logical [13]. This organism is also the most common pathogen of AHO. The pathophysiology has been elucidated through a rabbit model due to decreased oxygen tension after injury, and circulatory stasis [14].
The decision-making process in the surgical treatment of this patient is also unusual. As infection was discovered initially, several treatment options have been considered; either abandoning the original idea of ORIF or instead using an external fixation. However, this method is only rarely described [15] and also exposes the patient to risks such pin track infection and radial nerve injury [16]. The decision for definite treatment with internal fixation rather than other salvage procedures was based on our previous experience with infected long bone nonunions using rigid internal fixation [8, 17] as well of others [18]. The rationale behind this concept is that creating a rigid, stable environment enables the eradication of infection and promotes healing despite the risk of implant infection.

Clinical Message
AHO complicating closed fracture in adults is a very distinct entity, most of which involves diaphyseal long bones unlike metaphysical bone in child, indicating the presence of different pathophysiological mechanism. These are extremely rare, and treatment strategies are still in evolution. When encountered, the treatment of such should be aggressive both surgically and medically, and favorable mechanical environment, as well as prolonged, organism-specific, antimicrobial therapy, should be provided to provide fracture healing and eradication of infection. 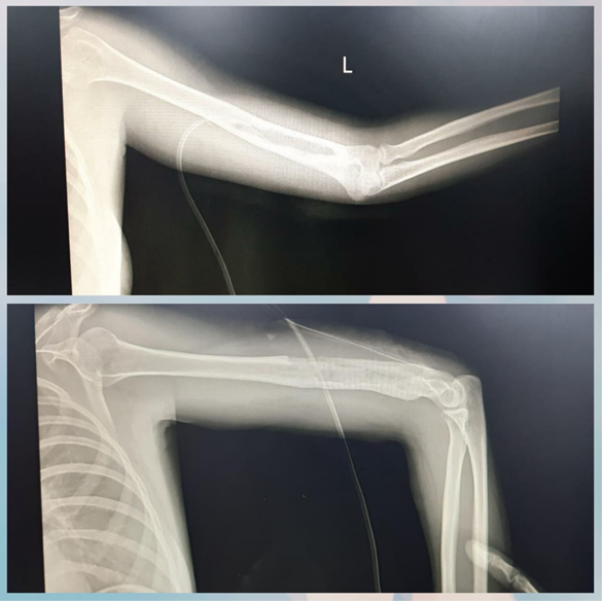 A Case Report of Osteomyelitis of Lower End of Tibia and Fibula as a Complication of Elastic Rubber ... 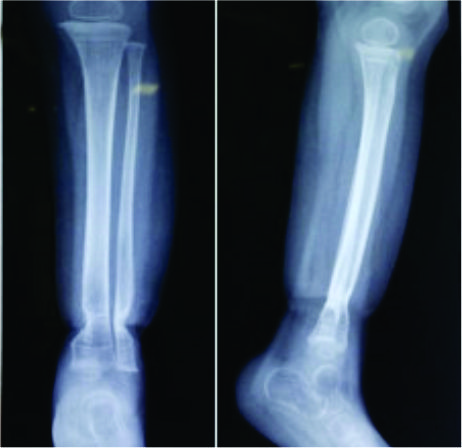 Combined Pyogenic and Tuberculous Osteomyelitis of the Clavicle: A Case Report...