Even with patient safety protocols in place, misinformation can happen and directly increase the risk of postoperative complications.

Introduction
Although calf augmentation is one of the least common procedures in plastic surgery, reported patient satisfaction rates are extremely high, and complication rates only reach around 1% [1]. The first descriptions of a calf augmentation procedure date from 1979 in two publications credited to Glitzenstein [2] and Carlsen [3], respectively. Subcutaneous insertion of the implant was the first technique used for calf augmentation. Then techniques using subfascial corridors to introduce the implants were described. In 2003, Kalixto and Vergara [4]described submuscular implant placement, demonstrating another possibility of prosthesis insertion through a deeper corridor. Supraperiosteal insertion was also described by Nunez and Garcia [5]; however, surgeon acceptance was quite poor since the technique is more aggressive and requires fasciotomy. At present, the literature tends toward sub fascial insertion due to several aspects, including a less complex, more reproducible procedure [6, 7, 8, 9]. Moreover, the submuscular technique increases the risk of compartmental syndrome and post-operative pain. Reported complication s related to calf augmentation include seroma, infection, chronic pain, implant extrusion, capsular contracture, wound dehiscence, and paresthesia atthesural nerve dermatome [6]. Calf implant disruption is a described complication, with 1.58% incidence [6,10]. However, to the best of our knowledge, no previous studies describe an implant rupture due to the posterome dial approach to fix a Schatzker V fracture of the tibial plateau.

Case Report
A 60-year-old female patient fell downstairs and presented a closed bicondylar tibial plateau fracture on the right knee (Schatzker V). The patient was referred to a trauma hospital and the surgery was scheduled for the following day. Soft tissues were classified as Tscherne I, and no distal neurovascular compromise was observed. A kidney transplant had been performed 10 years prior due to polycystickidney disease. The patient had also undergone bilateral subfascial calf implantation 15 years prior. However, the patient omitted this information despite questioning by the medical team about priorsurgical procedures.
(Fig. 1 and 2) depict pre-operative images.

Surgical technique
After general anesthesia, the patient was placed in supine oblique position on a radiolucent table with a contralateral subgluteus bump. Prophylactic antibiotic was administered. Although the use of tourniquet should facilitate fracture reduction and fixation, we have not used it in this case to prevent ischemic complications related to the patient age and comorbidities. A posteromedial Lobenhoffer approach was performed to address the posteromedial fragment of the tibial plateau [11]. Fracture reduction was achieved with a ball-spike pusher and K-wires provided provisional fixation. A t-shaped distal radius plate was placed at the posteromedial surface of the tibial plateau to buttress the fracture. During the most distal plate hole drilling, we observed a high volume of silicone drainage. We decided to keep the plate and carefully debrided the wound, removing all the silicone and calf implant. After extensive debridement, we completed the posteromedial fixation and removed the bump to achieve supine position and permit anterolateral fixation. An anterolateral approach was performed, and an L-shaped locked plate fixed the anterolateral fragment. (Fig. 3) depicts calf augmentation implant disruption. (Fig. 4) shows fracture reduction and fixation with plate and screws.
Knee Society Score function after 9 months was 80 points (Fig. 5).

Discussion
The esthetic appearance of the calf is determined by the gastrocnemius and soleus muscles, leg bone alignment and orientation, as well as subcutaneous fat distribution [6]. Calf augmentation is an infrequent cosmetic procedure aiming to improve leg contour in patients with thin legs or when a defect is present due to injury or illness (poliomyelitis, clubfoot, tumor treatment with radiotherapy, spinal or nerve injury, cerebral palsy, and contracture resulting from burns) [1, 6]. At present, most calf implants involve a silicone shell filled with highly-cohesive silicone gel. Complication rate following this procedure is low and reported patient satisfaction is extremely high. Although implant rupture has been reported in previous studies with 1.58% incidence, no references exist regarding implant rupture due to a posteromedial approach to fix a Schatzker V fracture of the tibial plateau [6]. The singularity of this case comes from the patient neglecting to inform the medical team of silicone calf prostheses implanted 15 years before the fracture, despite being asked about previous surgical procedures. Moreover, the implant scar was very small, located in the popliteal crease, and went unnoticed by the surgical team. Due to the rarity of this procedure, however, we missed the possibility of pre-operative diagnosis. Initially, one might wonder how the pre-operative computed tomography (CT)-scan failed to detect the implant, but a logical explanation exists. Even with a skin incision made in the popliteal crease, the calf implant had been placed more distally, so the CT-scan cuts missed the implant. Therefore, the surgical team saw the calf implant neither on the Lobenhoffer approach nor on the fracture reduction. However, as the plate end was placed behind the proximal part of the calf implant, the rupture occurred during the last plate hole drilling, causing significant silicone drainage in the wound. We decided to remove the implant shell and silicone while keeping the plate and screws. Extensive debridement and irrigation were performed to decrease infection risk. The patient evolved with fracture healing, no signs of infection, and satisfactory functional outcomes. Another possibility would have been removing plate and screws followed by debridement and irrigation, and finally transarticular external fixation. In the absence of infection days after the procedure, open reduction and internal fixation could have been scheduled. Although this treatment option appears safer in terms of infection, it requires one more surgical and anesthetic procedure, potential drawbacks for kidney transplant patients. Another concern about this case is the possibility of a late complication: Siliconoma. Siliconoma is characterized by reaction to a foreign body and causes calcification, fibrosis, and, if superficial, skin dyschromia [12]. After a 9-month follow-up, no clinical signs of siliconoma were observed. However, it is noteworthy that the above-mentioned complication may still occur, since removing the entire content of silicone from the wound was virtually impossible.

Conclusion
This case highlights that even with patient safety protocols in place, misinformation can happen and directly increase the risk of post-operative complications. We believe this case report can alert orthopedic surgeons to carefully evaluate leg images in traumatized extremities and look for calf augmentation implants, especially in unconscious patients.

Clinical Message
Calf augmentation is a procedure to enhance leg contour and the incidence of implant disruption is 1.58%. The aim of this case report was to alert orthopedic surgeons to carefully examine and palpate the calf and popliteal fossa when evaluating a patient with knee or leg trauma, especially if unconscious, looking for signs of a calf implant, to prevent catastrophic complications and legal issues. 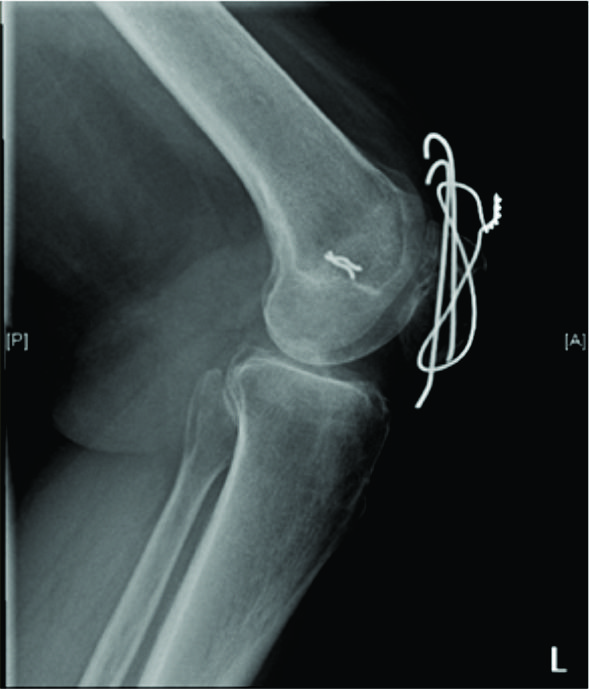 Expanding the Indications for Mini Plates in the Orthopedic Trauma Scenario: A Useful Alternative Te... 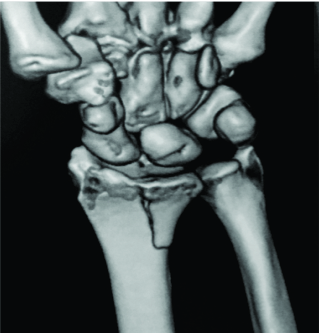 Reluctance to Cite our Peers in articles: Story of Academic Betrayals...
Phalangeal Osteomyelitis Caused by Staphylococcus lugdunensis – A Case Report of a Rare Associatio... 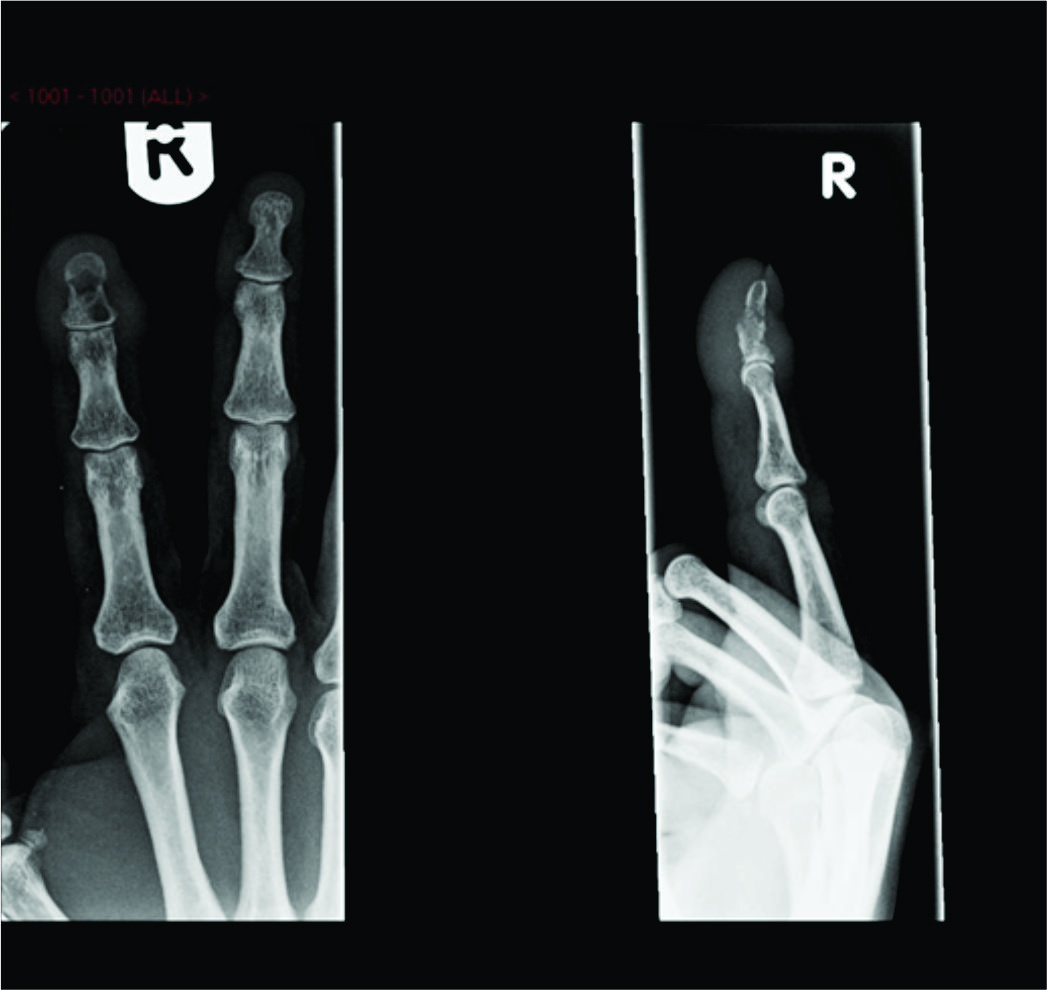