The presence of huge swelling around shoulder usually raises the suspicion of neoplastic lesion especially in elderly. However, even in the presence of massive swelling, a benign lesion like infection, cyst or bursitis should be considered in the differential diagnosis.

Introduction
Synovial inflammation of the glenohumeral joint is common in Rheumatoid Arthritis (RA), and synovitis frequently extends to affect the rotator cuff and bursae of the shoulder joint give rise to swelling around shoulder joint [1, 2]. However, the massive involvement of a subacromial bursa without inflammation in the glenohumeral joints is rare [1, 3]. We encountered a RA patient with a massive subacromial bursitis that was initially suspected to be a solid neoplasm because of its clinical appearance. The final diagnosis was bursitis associated with RA.

Case Report
A 69-year-old patient reported to orthopedic outpatient department in February 2012 with huge swelling of the left shoulder. The swelling had first manifested in late 2005 spontaneous onset, but the patient had not sought treatment because there was no pain or restriction of shoulder function. This patient had been diagnosed with classical RA according to the revised diagnostic criteria of RA about 19 years ago and was Steinbrocker’s Stage I, Class 2 [4]. Physical examination on palpation revealed a marked soft to firm non-tender soft tissue swelling on the anterolateral aspect of the shoulder joint (Fig. 1 and 2).

There were no inflammatory signs or adhesion to the skin, and the margin was not well defined. Skin over swelling was tense and shiny. No loose body could be palpated in the swelling, few dilated vein over the swelling was seen. Transillumination test was negative, fluid thrill was absent, and swelling was non-compressible. However, active and passive shoulder motion was full. Bilateral wrist joints and hand showed no swelling or deformities and showed full motion. These above clinical findings raised the suspicion of neoplasm keeping age of patient in mind. Ultrasound was done which showed only large cystic lesion filled with fluid and some floating loose bodies; however, its origin was not clear so we decided to do magnetic resonance imaging (MRI).However, laboratory findings were normal except for abnormalities due to RA: Hemoglobin 12.6 g/dl, total white blood cell count 8300/mm3, erythrocyte sedimentation rate 32 mm/h, C-reactive protein (negative), and rheumatoid factor (positive). The latest reports at the time of presentation, i.e., on February 12, 2012, laboratory findings were hemoglobin 12.4 g/dl, total white blood cell count 7400/mm3, erythrocyte sedimentation rate 34 mm/h, C-reactive protein 3.64 mg/dl (normal <0.3), and rheumatoid factor 135 IU/ml (normal <25). In radiological studies, the anteroposterior view of the left shoulder showed soft tissue swelling, but no periosteal reaction. No articular erosion was observed, but a little narrowing of the joint space was noted. The bilateral wrist joints showed the typical changes caused by RA, corresponding to Steinbrocker’s Stage I. Since the swelling was large enough to raise the suspicion of neoplasm that could be one of differential diagnosis to be considered as, appropriate for his age. Since the swelling was tense, margin was ill defined, firm on palpation with dilated vein over the swelling and classical palpatory finding of cystic lesion was absent so it raised the suspicion of neoplastic origin. The following examinations were performed: A plain X-ray of the left shoulder, which revealed a large low-density homogenous mass expanding the deltoid muscle (Fig. 3); a 99m Tc-MDP bone scintigram, which revealed normal findings except for high uptakes of the wrist joints due to RA; a 67Ga-citrate scintigram, which was normal; and MRI left shoulder showed bursa filled with fluid (Fig. 4). 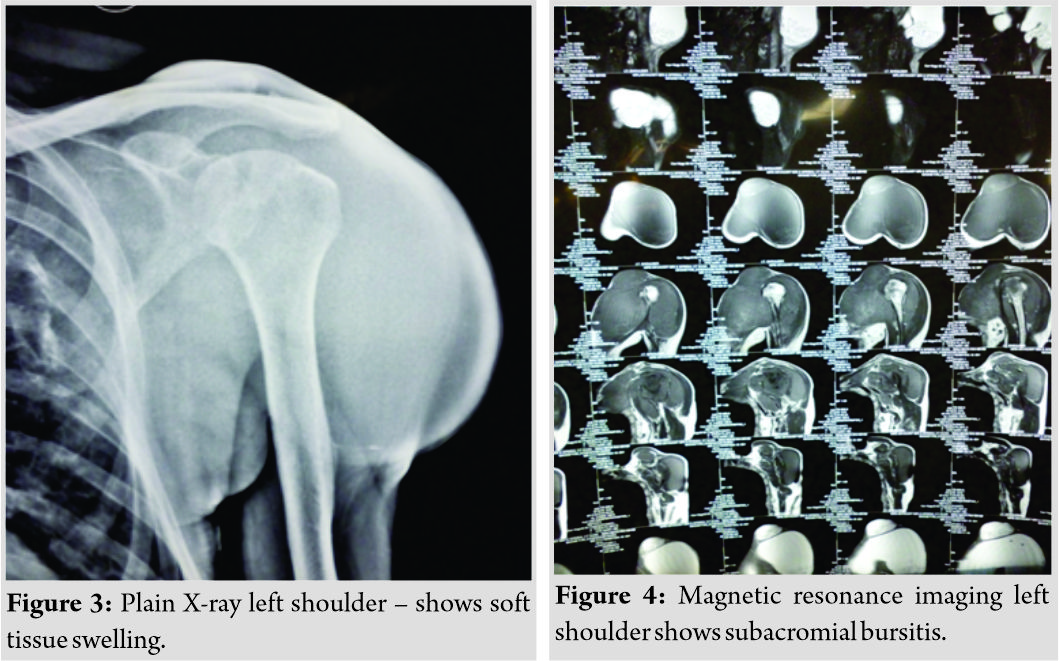 The patient was treated by surgical exploration on February 20, 2012, based on a clinical diagnosis of subacromial bursitis in RA. After pre-anesthesia checkup, the patient was operated under general anesthesia in supine position. After the tight and expanded bursal roof was incised, rice body like material and straw-colored fluid came out (Fig. 5a and b). All of these substances were removed and the bursectomy was completed. The excised bursa measured approximately 25 cm × 9 cm (Fig. 6). Macroscopically, no villous formation was seen in the bursal membrane. In addition, inspection of the glenohumeral joint through the rotator interval appeared normal. Wound was lavaged and finally closed (Fig. 7 and 8). 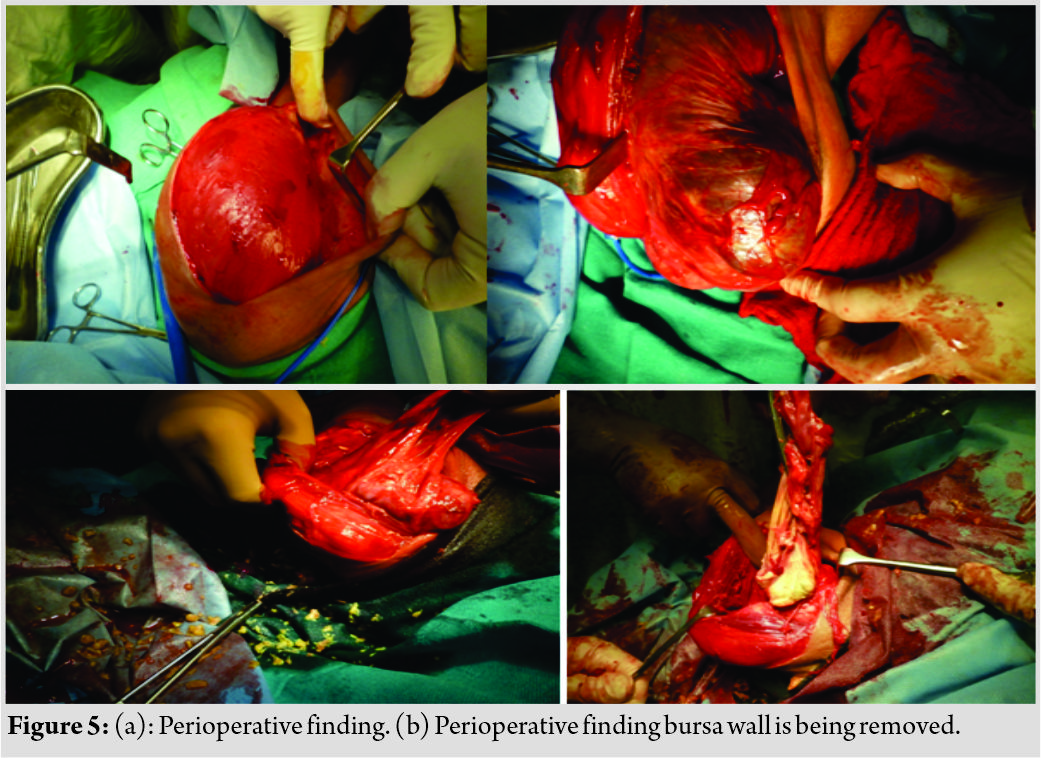 Neither Gram-positive nor Gram-negative organisms were grown in culture. Mycobacterium culture was also negative in the bursal contents. Histologically, the bursal membrane showed thickening which was assumed to be due to chronic inflammation, but no villous hypertrophy (Fig. 9). Since the synovial surface was stained with the phosphotungstic acid-hematoxylin stain (PTAH), depositions of fibrin were indicated. The intrabursal substance showed amorphous tissue which was almost entirely stained with PTAH, but few cells were observed anywhere. The alkaline Congo red methods showed no staining. Thus, we concluded that the substance was a thick collection of fibrin.

Results
The patient has full range of motion and followed up for 4 years. At the end of 5 years, he does not show any recurrence.

Discussion
Subacromial or deltoid bursitis is usual complication of RA generally occurs in association with scapulohumeral arthritis. The other common etiologies include Subacromial impingement, Subacromial hemorrhage, Repetitive overhead activities, direct trauma, crystal deposition, gouty bursitis and Infection are also common. There is communication between the two cavities due to perforation of the rotator cuff. There have been few reports of isolated involvement of the subdeltoid bursa [5, 6]. However, subdeltoid bursitis as a presenting manifestation of Rheumatoid disease is rare. The formation of intra-articular rice bodies was first described in tuberculous arthritis; however, it appears to be a common finding in RA and bursitis as well [7, 8]. The presence of rice bodies in bursal in RA was described by Doury et al. [9] and Watanabe et al. [6]. Subacromial Rheumatoid bursitis may presents with a painful arc syndrome, but marked swelling of the shoulder is the most unusual and rare presenting symptom. The condition is of course, treated surgically. This allows the removal of the loose bodies, resection of the lining of the bursa, and pathologic examination of the synovial membrane. The size of subacromial bursa is usually small but sometimes it presents as huge swelling mimic neoplasm as reported by Minoru Yoneda et al., in 2001 [10]. It may also present as a swelling filled with multiple rice body, a rare presentation of chronic subacromial bursitis secondary to extensive underlying RA, seronegative inflammatory arthritis or tuberculous joints as noted by Joshi [11], and similar presentation was also noted by Bacha et al. [12]. In a separate study by Krishnamoorthy, he was found to have giant-cell tumor of the supraspinatus tendon sheath, which was the cause of swelling and pain along with impingement of shoulder. Takayama et al., in 2000, reported a swelling around shoulder join that mimics soft tissue tumor [13].

Conclusion
The subacromial bursa usually does not enlarged enough in RA to mimic a neoplastic lesion. The presence of huge swelling around shoulder usually raises the suspicion of neoplastic lesion, especially in the elderly. However, even in the presence of huge swelling, a benign lesion such as infection, cyst, or bursitis should be considered. This case report presents that even if swelling is massive, the benign lesion must be considered as a differential diagnosis of swelling around shoulder joint. 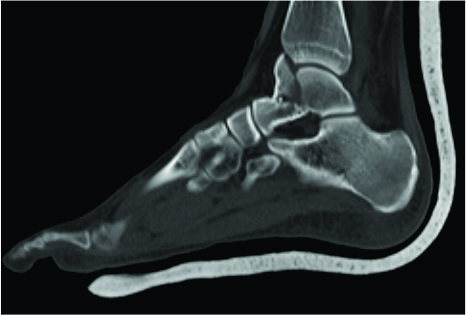 A Rare Anatomical Variation in the Origin of the Tendon of Long Head of Biceps in a 30-Year-Old Male... 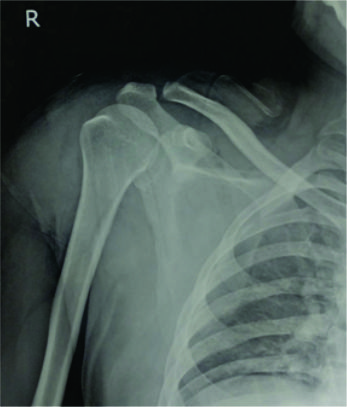 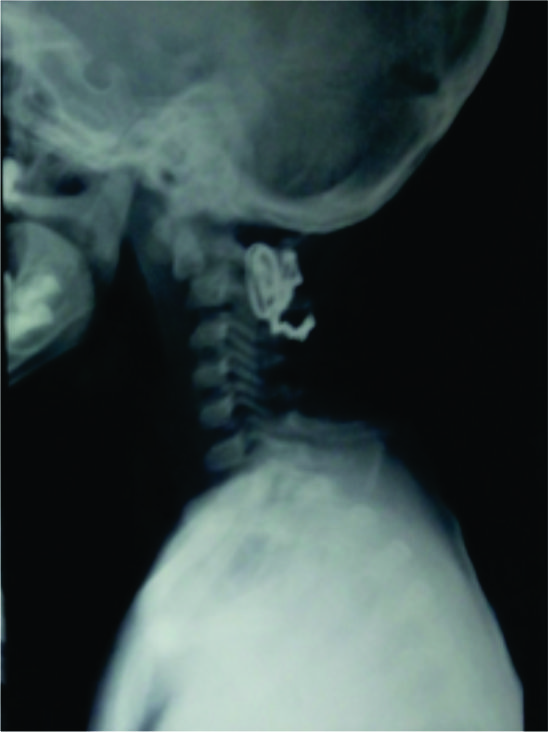 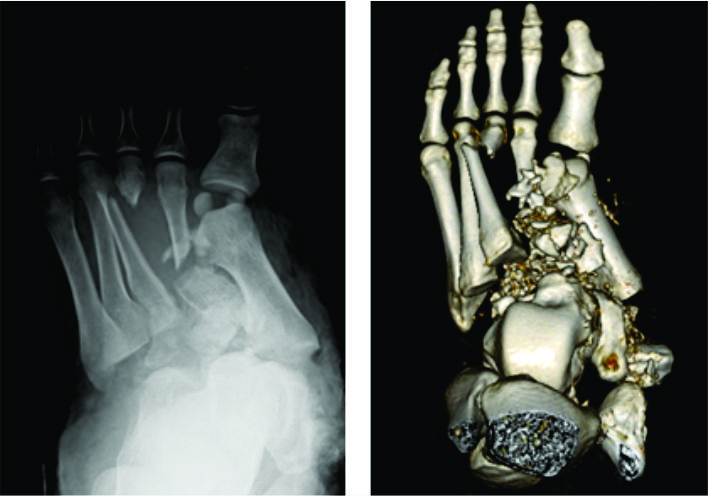