Knowledge of rare occurrence of gauzoma following forearm and wrist surgery and its timely diagnosis and management.

Introduction: Retention of cotton-based gauze or sponge in surgical field, variously called as gauzoma, gossypiboma, textiloma, and muslinoma, is an unexpected and untoward human error that carries sinister consequences for patients and surgeons. Although reported at various surgical sites, no such case has been reported so far in upper limb after wrist surgery.
Case Report: Here, we present a case of gauzoma in a 24-year-old male who was operated for his right side distal radius fracture at a private hospital. He noticed gradually increasing swelling in his forearm 6 months after operation which persisted after the removal of implant. Initial cytological evaluation suspected soft-tissue tumor and he was referred to our hospital for further management. Plain radiographic, sonographic, and magnetic resonance imaging findings could not ascertain the pathology conclusively. Surgical exploration revealed retained gauze piece surrounded by granulation tissues and membrane. Histopathological examination confirmed gauze piece with necrosis and surrounding inflammation. The patient recovered uneventfully and has had no recurrence till final follow-up.
Conclusion: Despite uncommon condition at uncommon site, one should always have a strong suspicion of this entity at previous surgical site since it has a varied clinical and radiologic presentation. Strong vigil, strict adherence to surgical safety protocol is paramount to evade this orthopedic surgeons’ nightmare.
Keywords: Gauzoma, retained gauze, forearm, wrist, soft-tissue tumor.

Introduction
Retention of surgical items (RSIs) are an unfortunate, serious yet avoidable condition that carries ominous risk for patients and can bring disrepute to surgeon’s name. Among various RSIs, cotton-based sponge, gauze, and pledgets are most frequently observed [1]; it has been referred to by various synonyms such as gossypiboma, gauzoma, textiloma, and muslinoma [2]. Its incidence is hard to determine partly due to under reporting of cases for fear of medicolegal litigations. However, reported incidence varies between 1 in 1000 and 1 in 10,000 for all surgical procedures. Because of varied clinical and radiological presentation, it poses formidable challenge to diagnose and delay in diagnosis may lead to serious morbidity [3, 4]. Retention of sponge or gauze is, quite conceivably, commonly reported after abdominal, thoracic, pelvic, gynecological, and neurosurgical procedures where it is easy to lose gauze in body cavity [3, 4]. Cases are extremely rare in musculoskeletal system; only 6% of gauzoma are reported following orthopedic and spinal surgery in comparison to 52% following abdominal surgery [5]. Few cases of gauzoma are described in lower limbs, albeit there is no such evidence of the same in upper limb in literature. We herein present a case of gauzoma in forearm mimicking as soft-tissue tumor in a patient operated for fracture of distal radius. To the best of our knowledge, this happens to be first such case of retained gauze after wrist surgery till date.

Case Report
A 24-year-old male patient had road traffic accident dated January 2018, was taken to a nearby orthopedic surgeon, where he was diagnosed as having intra-articular distal radius fracture of the right side, and was operated 2 days after injury with anatomical distal radius locking plate. He was doing fine for 6 months after the index surgery; thereafter, he noticed a swelling in his lateral aspect of the right forearm for which he consulted his index surgeon, was advised course of oral antibiotics with regular follow-up. However, his swelling did not subside and was slowly increasing in size which made him to visit his index surgeon again where he was advised removal of implant. 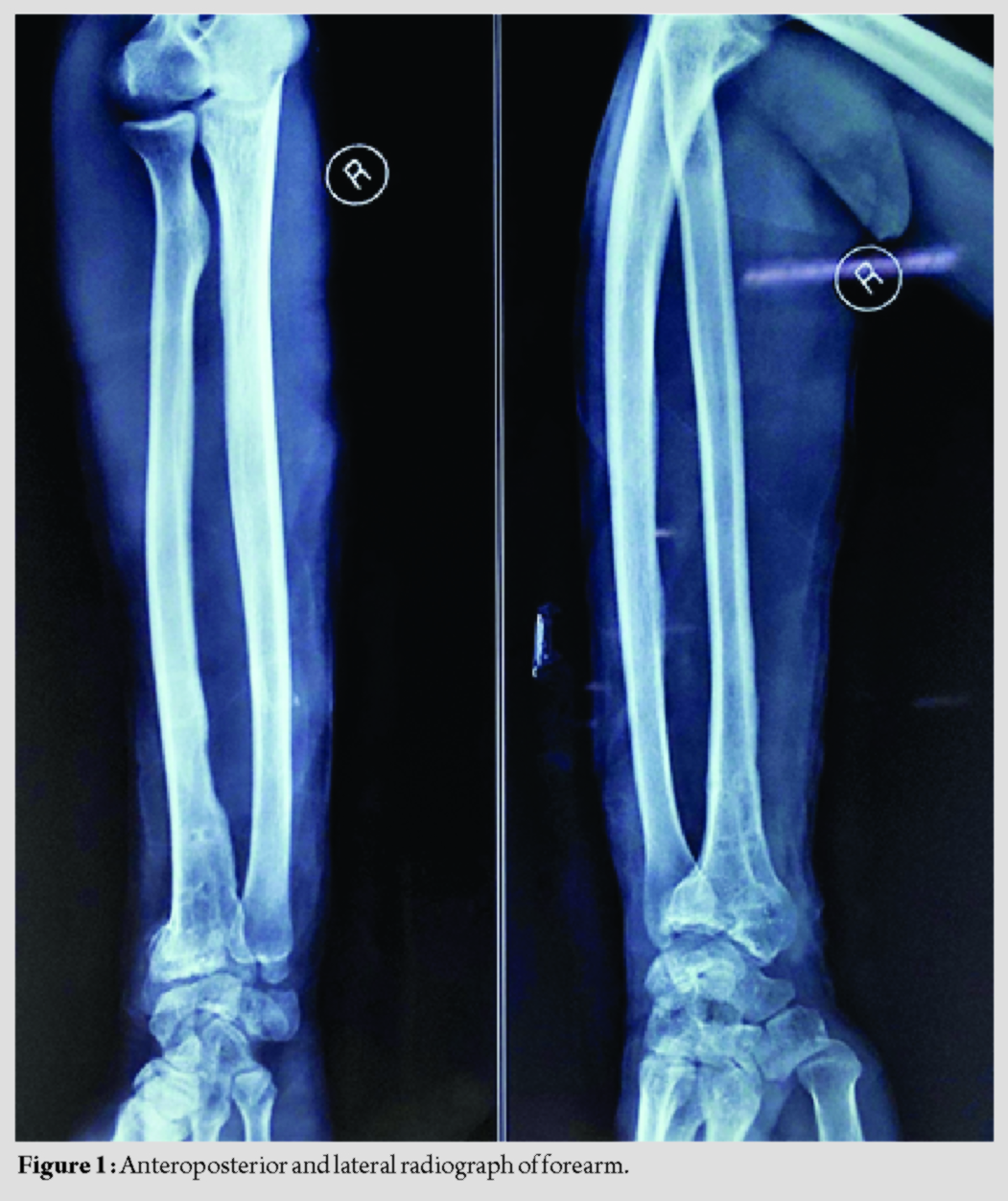 One month following removal of implant, he again noticed swelling now on his inner aspect of the right forearm which was also slowly increasing in size; he was advised ultrasonography and fine-needle aspiration cytology (FNAC). Sonographic findings were non-specific, but FNAC report suggested soft-tissue sarcoma and was finally referred to our tertiary care hospital for further management.

Clinically, the patient was afebrile with no history of weight loss. Non-tender, ill-defined, and firm swelling was located on inner aspect of his right forearm; overlying skin was free with normal texture and normal temperature. Swelling was not fixed to underlying structure and regional lymph nodes were not enlarged. Routine laboratory and biochemical parameters were within normal rage except for mild raised erythrocyte sedimentation rate. Radiograph revealed malunited fracture of distal radius with evidence of screw holes of previous implant. Soft-tissue shadow was noticed adjacent to ulna with no evidence of bone erosion and/or periosteal reaction (Fig. 1). Here, the patient was advised contrast magnetic resonance imaging (MRI), which reported calcified soft-tissue mass measuring 8.3 cm × 1.6 cm × 10 cm situated in medial aspect of lower third ulna extending to ventral compartment of the right forearm, appearing isointense on T1WI and hyper- to hetero-intense on T2WI with intact overlying skin. The lesion showed peripheral rim enhancement on T1WI FS post-contrast image (Fig. 2). Ultrasound-guided core biopsy elicited dry tap possibly because of thick organized content. The patient was, therefore, planned for exploration and debridement. Curvilinear incision was given cantering over the swelling. Skin and subcutaneous tissue were excised along the marked incision. As the superficial fascia was cut and muscles were mobilized, a large gauze piece was found with surrounding granulation tissue and membrane. It was removed in toto and was sent for histopathological examination (Fig. 3). After debridement, wound was washed thoroughly with saline and closed in layers after careful inspection. Histopathological findings confirmed gauze piece with the presence of granulation tissues, focal necrosis, mononuclear cell infiltration, and giant cells. No evidence of tumor was documented. 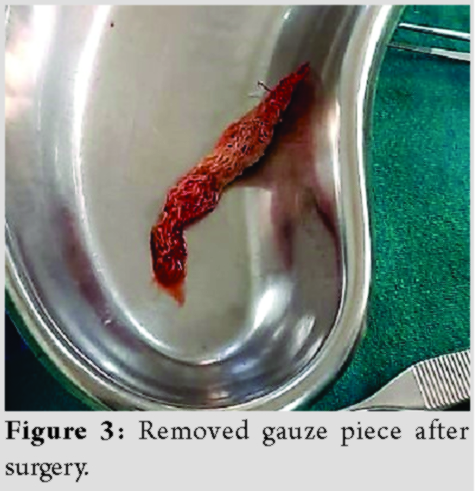 He was kept on intravenous first-generation cephalosporin for 5 days before hospital discharge. Recovery was uneventful; suture removal was done after 14 days. At the last follow-up, 10 months after operation, he is free of symptoms with no recurrence of swelling and resumed his normal activities.

Discussion
Gauzoma is an uncommon condition albeit it is thought to be seen 1–2 times in a surgeon’s carrier [6]. It is undesirable for both patients and surgeons; despite advancement of technologies, surgical safety norms and training, this mishap continues to dent surgical practice. Our reported case assumes significance since it poses an alarming signal of its purported first ever association in forearm till date. Surgical gauze or sponge is inert and does not decompose or undergoes biomedical reaction. Various terminologies such as gauzoma, gossypiboma, textiloma, or muslinoma usually refer to foreign body inflammatory mass arising from inadvertently retained non-absorbable cotton matrix [2]. Olnick et al. described two types of eventualities in response to retained gauze: One is exudative reaction which culminates into abscess, sinus, and fistula formation. The other one is aseptic fibrinous reaction that leads to adhesion, encapsulation with granuloma formation [7]. In our case, the patient had the latter response which resulted in a slowly growing painless mass. Clinical presentation is diverse and is contingent on nature of reaction and surgical site. Because of varied presentation and symptoms, it may be indistinguishable from abscess, recurrent tumor, expanding hematoma, primary or metastatic neoplasm and can pose a grave diagnostic dilemma [8]. In our case, innocuous presentation, repeated surgeries, recurrent episode of swelling, coupled with initial erroneous cytologic interpretation, index surgeons, and pathologist had an impression of soft-tissue sarcoma. Diagnostic dilemma can be negated by appropriate radiological investigation; however, no pathognomonic radiological signs exist which further add to the quagmire despite sophisticated imaging techniques [6]. Plain radiographic and sonographic findings of our patient were non-specific; MRI too was inconclusive and could not delineate presence of gauze. It has to be kept in mind that imaging characteristic is diverse and varies depending on factors such as time elapsed since surgery, type of foreign body reaction, surgical site, and nature of material in foreign body; they cannot, therefore, be relied solely for diagnosis. Therefore, very high index of suspicion to be exercised by an astute surgeon. Diagnosis can be aided by imaging findings; however, intraoperative findings and histopathological examination could help to reach definite diagnosis [4, 8]. Gawande et al. had enumerated various factors associated with increased risk of retention of foreign body such as emergency surgery, unplanned change in operation, and high body mass index [9]. Erroneous count of gauze material before wound closure continues to create substantial problem [6]. Various preventive strategies, operation room (OR) protocols, and surgical checklist have failed to completely eradicate this human error. Use of threaded cotton pad with radiopaque marker, provision of counting and documenting of surgical items multiple times, careful thorough inspection of surgical field before closure, avoidance of untrained personnel and indecent haste during procedure, use of fluoroscopic visualization before leaving OR in case of doubt, and strict adherence to the rules with continuous education and training are utilitarian to bring about fruitful changes. Recently, new technologies of gauze tracing with electronic article surveillance using tagged surgical sponge are emerging as potential deterrents [1, 6, 10]. Our patient initially had swelling on his lateral aspect of right forearm, but after the removal of plate, he developed swelling on medial aspect. It might be possible that gauze piece was packed at medial aspect of radius which might have migrated to medial side of ulna. This could possibly explain this intriguing finding; intraluminal migration of surgical mop in gut without any fistula has also been reported previously [11]. Because of the unexpected site of gauzoma, we could not think of the same at initial presentation. In wrist surgery, where the incision is small, surgery is performed mostly under tourniquet and there is no deep cavity, it’s very unlikely to lose a gauze piece inside. Cognizance of this case is important to unravel diversity of this problem which could add to the knowledge and practice of orthopedic surgeons. Gauzoma should, therefore, be kept in differential diagnosis of any unexplained soft-tissue swelling at the site of previous surgery in upper limbs also.

Conclusion
Retention of surgical sponge or gauze following forearm and wrist surgery is undoubtedly an infrequent human mishap that carries sinister complications for patients and can invite legal litigations for surgeons. Diagnosis is very often missed due to varied clinical and radiological presentations. Strong vigil and strict adherence to surgical safety protocols are utilitarian to avert this unexpected and unwarranted complication.

Clinical Message
Gauzoma in upper limb is a rare entity. It can masquerade as soft-tissue tumor. It should be kept in differential diagnosis for any soft-tissue swelling at previous surgical site. 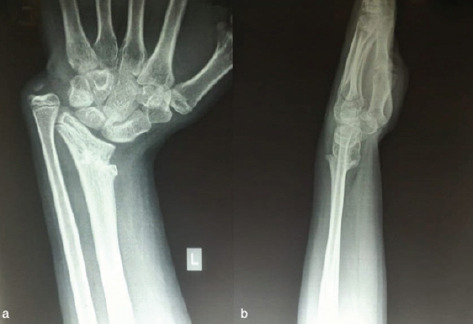 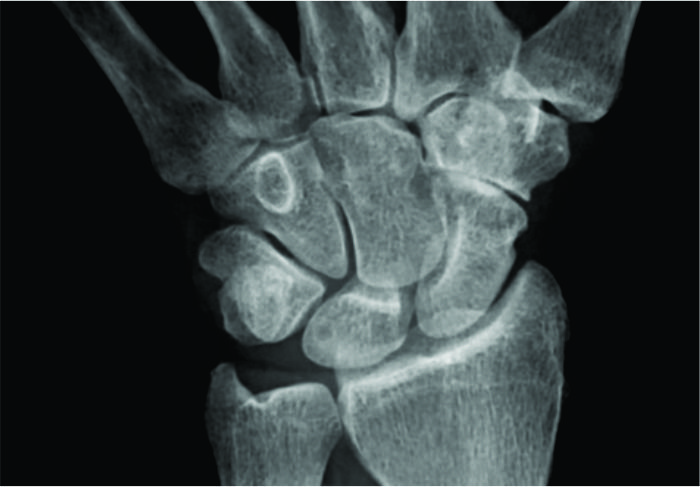 Tuberculous Tenosynovitis of the Wrist and the Hand: The 3 Anatomo-Clinical Forms Described by Kanav... 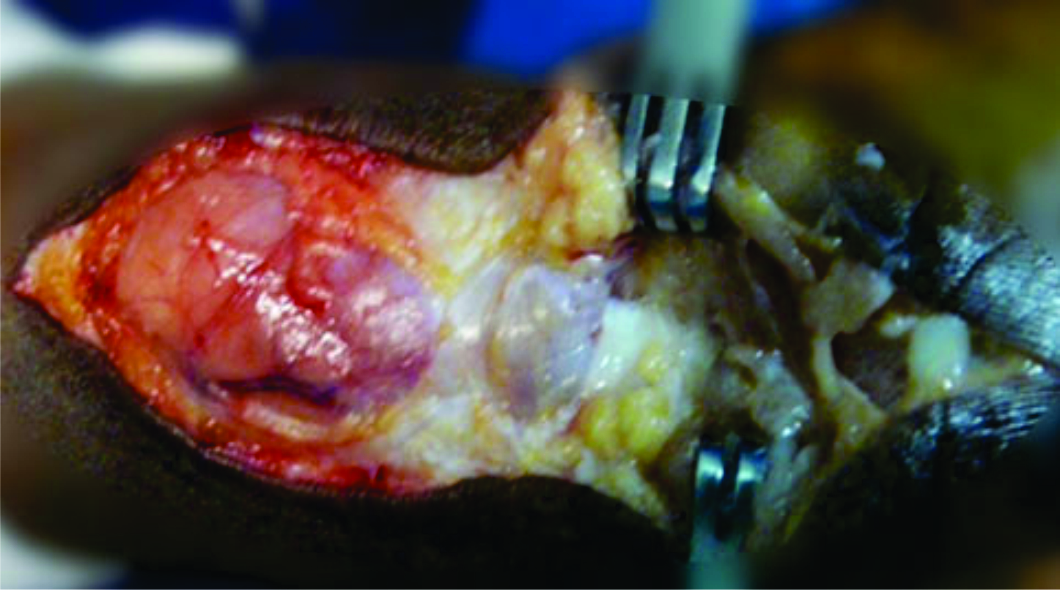