Secondary Chondrosarcoma Arising from the Proximal Fibula Presenting as Sciatica

Although sciatica is extremely common, this case demonstrates the importance of both physical examination and correlation of imaging to confirm the diagnosis and rule out a lesion within the involved extremity.

Introduction: Secondary chondrosarcoma is a rare entity arising from a pre-existing cartilaginous lesion. Transformation of an osteochondroma to a chondrosarcoma occurs in <1% of cases. Sciatica is a common problem that can cause significant pain, weakness, and numbness.
Case Report: A 36-year-old male presented to the Orthopedic Oncology Service after being treated for sciatica for 3 years. Magnetic resonance imaging of the lumbar spine demonstrated degenerative disc disease with mild inferior foraminal narrowing at L5-S1. He had undergone multiple epidural steroid injections without improvement in his symptoms. A chondrosarcoma encasing the peroneal nerve was found arising from an underlying osteochondroma in the proximal fibula. The patient underwent resection of the tumor which included resection of the peroneal nerve. Five years after resection, the patient is disease free and uses an ankle-foot orthosis for ambulation.
Conclusion: This case demonstrates the importance of evaluating a patient with peripheral nerve symptoms for a lesion within the involved extremity along the entire length of the nerve. Extraspinal lesions can compress peripheral nerves and cause radicular symptoms. Timely treatment is important to prevent malignant transformation or worsening of the tumor as well as to provide better functional outcome.
Keywords: Sciatica, chondrosarcoma, osteochondroma, fibula, secondary.

Introduction
Benign, solitary osteochondromas are common and occur in approximately 3% of the population [1]. Although uncommon, an osteochondroma may cause a peroneal nerve palsy when it arises from the proximal fibula [2, 3, 4]. Secondary chondrosarcoma is a rare transformation that occurs in only 1–2% of solitary osteochondromas [5]. Pain and peroneal nerve compression can occur in malignancies of the proximal fibula [6]; however, sciatica is a much more frequent cause of unilateral leg pain as well as weakness and paresthesias [7]. When evaluating the patient with symptoms of sciatica, care must be taken to determine if the symptoms are typical or not. Although less common, infection and malignancy can mimic the symptoms of sciatica. Early diagnosis of these causes of sciatica symptoms is important to decrease the morbidity and mortality from the underlying cause. We present the case of a 36-year-old male who was treated for 3 years for a diagnosis of sciatica before the discovery of a chondrosarcoma of the proximal fibula.

Case Report
A 36-year-old Caucasian male with no significant previous medical problems presented to the orthopedic oncology clinic with complaints of pain in the right leg with an associated foot drop. He was otherwise healthy and denied any history of trauma or injury, did not smoke, and had no prior surgery or significant family history. He developed pain along the sciatic distribution 3 years before evaluation with progressive numbness, tingling, and weakness. His prior work-up included radiographs and magnetic resonance imaging (MRI) of his L-spine which demonstrated Grade I anterolisthesis of L5 on S1 with associated degenerative disc disease (Fig. 1). Mild inferior foraminal narrowing was also noted. The patient had been treated by their primary care physician who referred them to pain management when physical therapy and anti-inflammatory medications did not improve his symptoms. His treatment course included epidural steroid injections and treatment with gabapentin and oxycodone. Two years before evaluation, he developed a palpable mass in his right upper calf that slowly increased in size. Nine months prior to evaluation, the patient had increasing pain and progressive weakness and numbness.

On evaluation, the patient’s right calf measured 42 cm at the level of the tibial tubercle compared to 38 cm on the left. A firm, non-mobile mass was palpated with a positive Tinel’s in the peroneal nerve distribution. The patient had numbness in the peroneal distribution with normal posterior tibial sensation. His ankle and toe dorsiflexion was graded as 2 out of 5. He ambulated without an assistive device but noted he would trip over his foot occasionally. A plain film demonstrated a tumor arising from the proximal fibula with sparse calcifications in the soft tissues (Fig. 2). An MRI of the leg was then performed demonstrating tumor arising from the proximal fibula that measured 9.6 cm × 6.7 cm × 6.6 cm in size (Fig. 3). Staging studies, including a whole body bone scan and computed tomography (CT) of the chest, demonstrated no evidence of metastatic disease. A core biopsy of the tumor demonstrated a Grade II chondrosarcoma. 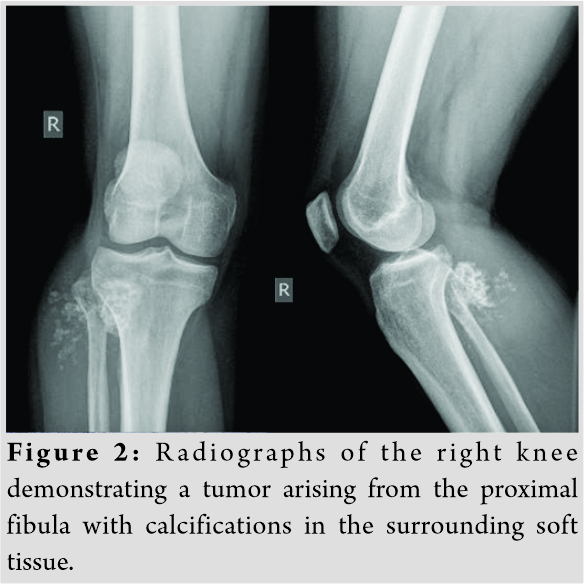 The patient then underwent resection of the tumor. This included a partial resection of the proximal tibia with resection of the tibiofibular joint and ligation of the peroneal nerve proximal to the tumor as the nerve was encased within the tumor. A portion of the tibialis anterior, peroneus longus and brevis, and soleus was resected to obtain negative margins. The lateral collateral ligament, tensor fascia lata, and biceps femoris were resected proximal to the tumor, and a portion of the underlying knee capsule was also resected. Reconstruction was performed by reattaching the tibialis anterior to the proximal tibia through drill holes with the ankle in neutral to minimize the foot drop. The peroneals were repaired to the remaining fibula through drill holes with the ankle in neutral as well. A lateral gastrocnemius flap was used to provide coverage of the defect from the resected tibialis anterior and peroneals. This was also used to reconstruct and reinforce the lateral knee capsule and ligaments. Proximally, the gastrocnemius was repaired to the remaining biceps femoris and knee capsule. Final pathology demonstrated a Grade II chondrosarcoma with negative margins (Fig. 4). The closest margin was between 1 mm and 2 mm from the tumor. An underlying area of low-grade cartilage arising from benign bone from the fibula confirmed an underlying osteochondroma (Fig. 5). Post-operative radiographs and clinical photographs are shown in [Fig. 6, 7]. 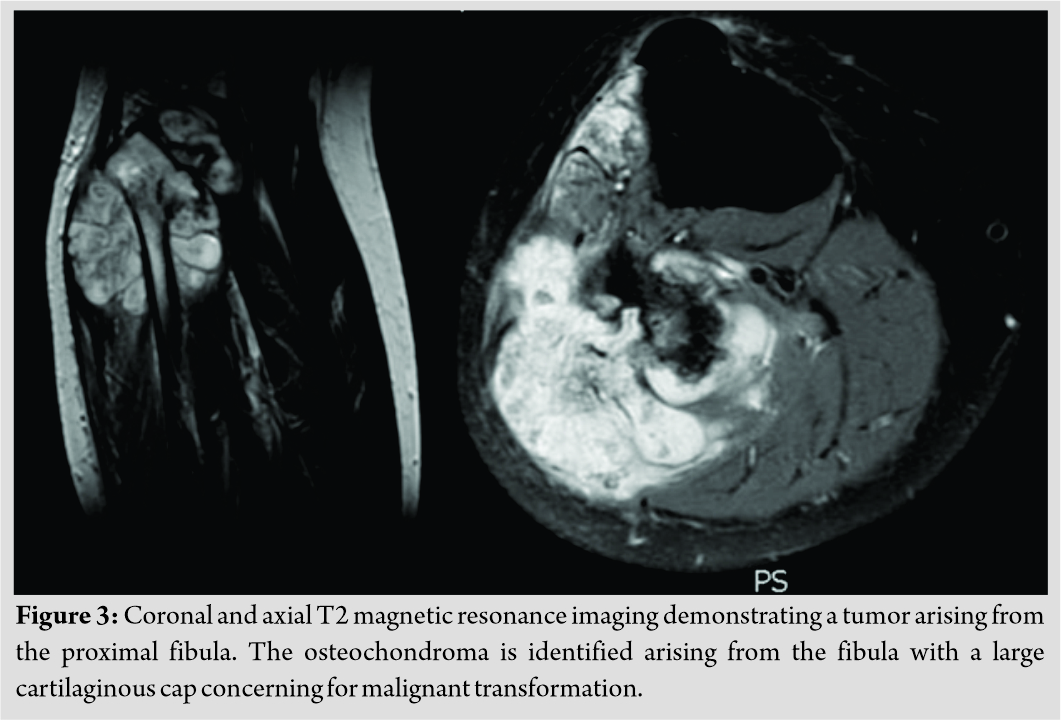 The patient’s post-operative course was uncomplicated. He was kept in a short leg splint and remained non-weight-bearing for 2 weeks until his incision was healed. He was then allowed to weight bear and begin physical therapy. The patient was monitored for local recurrence and metastatic disease with serial MRIs of the leg, whole body bone scans, and CT scans of the chest. No evidence of local recurrence or metastatic disease was found 5 years after surgery. At latest follow-up, the patient regained full range of motion of his knee and plantar flexion at his ankle. He has no contractures and has had no issues with skin breakdown. He has chronic pain and paresthesias, with no sensation or motor function in the peroneal nerve distribution. The patient ambulates with an ankle-foot orthosis. 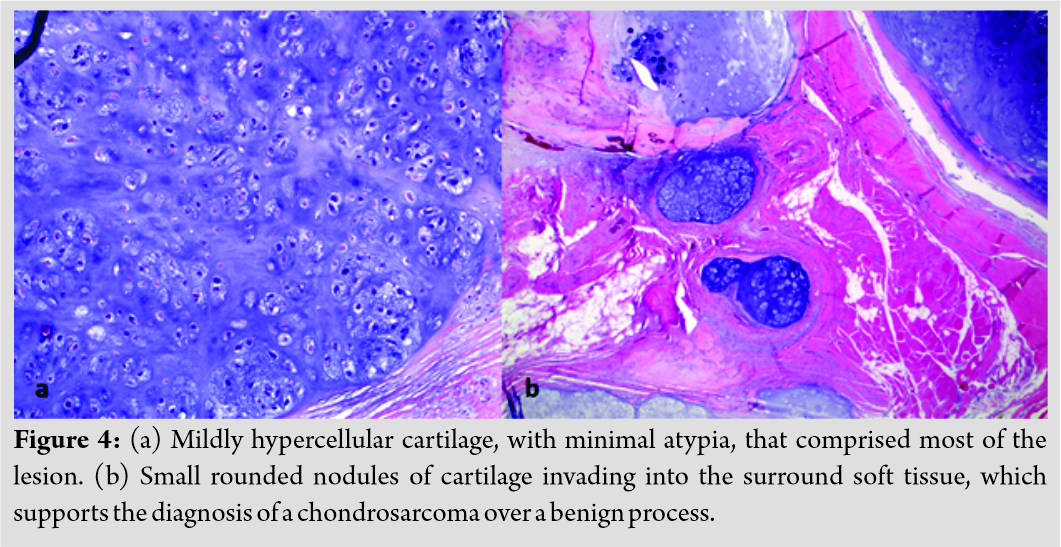 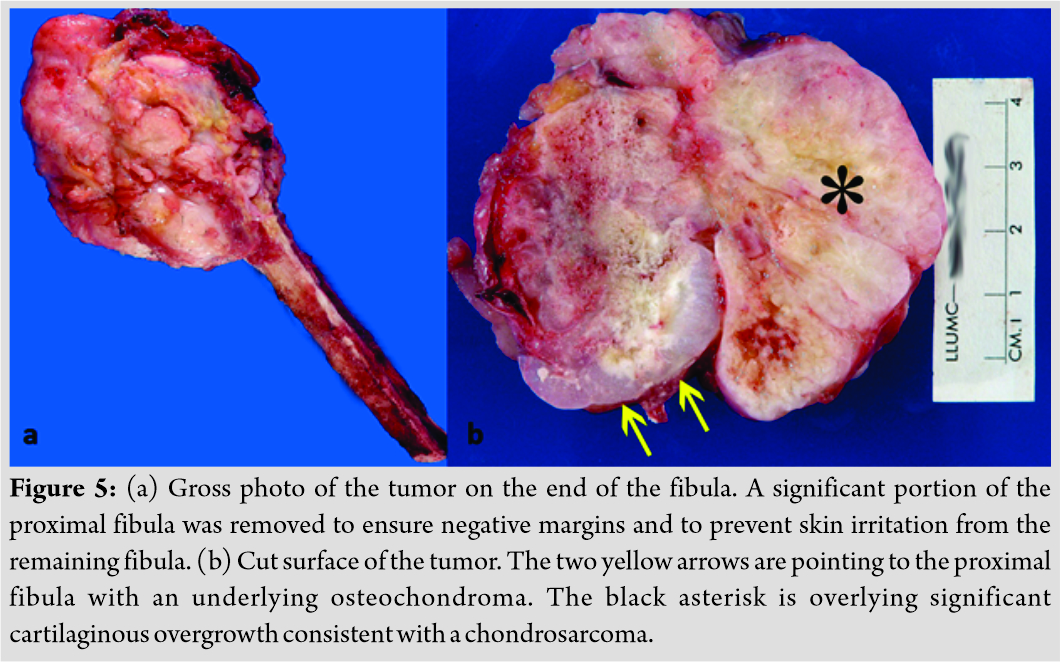 Compression of the sciatic nerve by tumors can cause symptoms that mimic sciatica [11]. Diagnosis can be difficult as a straight leg raise is commonly positive [12]. Sciatica due to a herniated disc or spinal stenosis is a much more common diagnosis. Pain that is constant, not relieved with position, progressive, and localized to a point along the course of the nerve are concerning signs. Delay of diagnosis can result in an increase in both morbidity and mortality depending on the underlying pathology.

In this case, we present a 36-year-old male who had a 3-year delay in the diagnosis of a Grade II chondrosarcoma arising from the proximal fibula. As secondary chondrosarcomas are typically Grade I, the delay in diagnosis likely led to the tumor becoming a higher grade. The delay also likely resulted in encasement of the common peroneal nerve. The patient’s MRI of his L-spine demonstrated no distinct lesion that would cause his sciatica. Although he had low back pain with radiation up and down his leg in the sciatic distribution, his pain was most severe at the proximal fibula. The importance of physical examination in this case must also be emphasized as the patient felt a mass that was increasing in size. This case exemplifies the importance of considering extraspinal compression of the sciatic nerve when focal pain is significant along the course of the nerve and imaging does not demonstrate compression of the nerve in the spine.

Conclusion
Peripheral nerve symptoms need to have an evaluation along the entire length of the nerve. Even radiating symptoms can be caused by an extraspinal lesion and other causes must be evaluated. As tumors enlarge, they can compress on peripheral nerves and finally encase them. Timely treatment is important to prevent malignant transformation or worsening of the grade and stage of the tumor, as well as being able to save the nerve and provide a more functional limb.

Clinical Message
Although sciatica is extremely common, this case demonstrates the importance of both physical examination and correlation of imaging to confirm the diagnosis and rule out a lesion within the involved extremity. 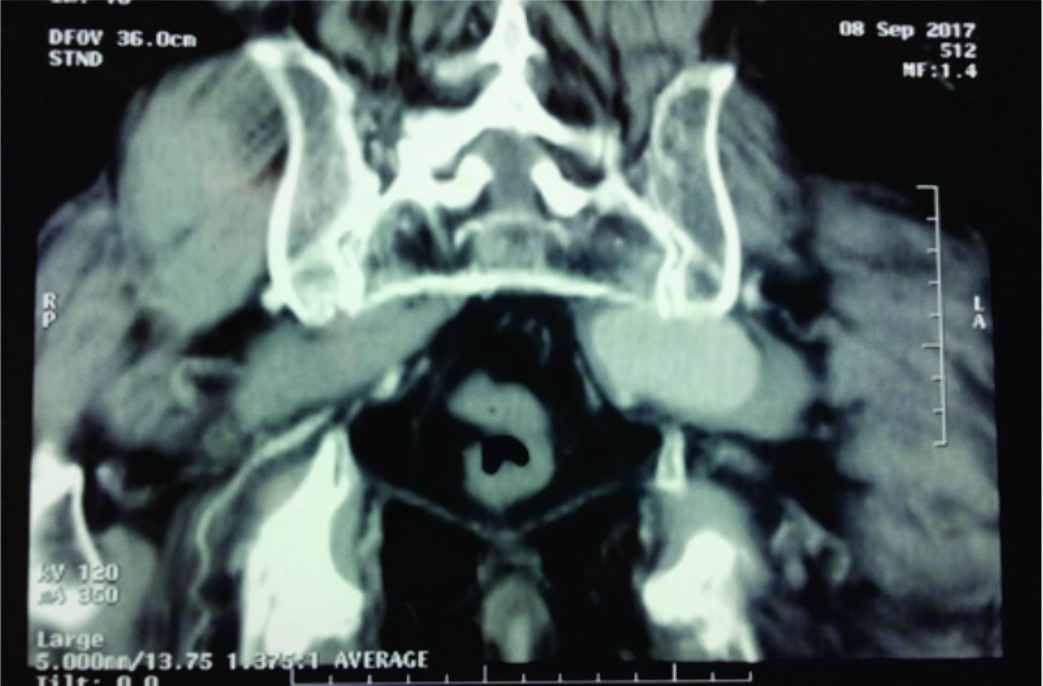 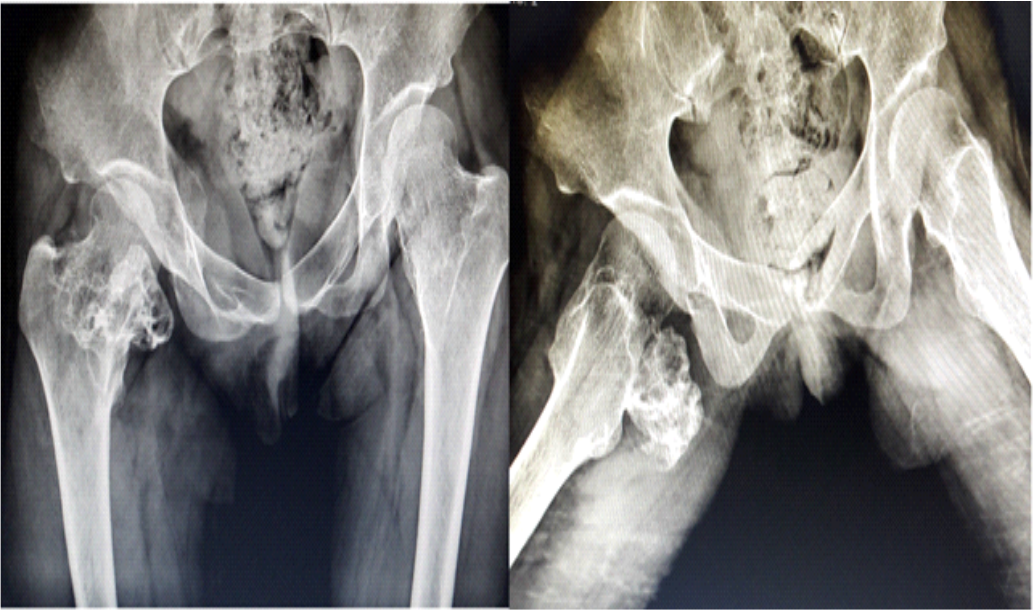 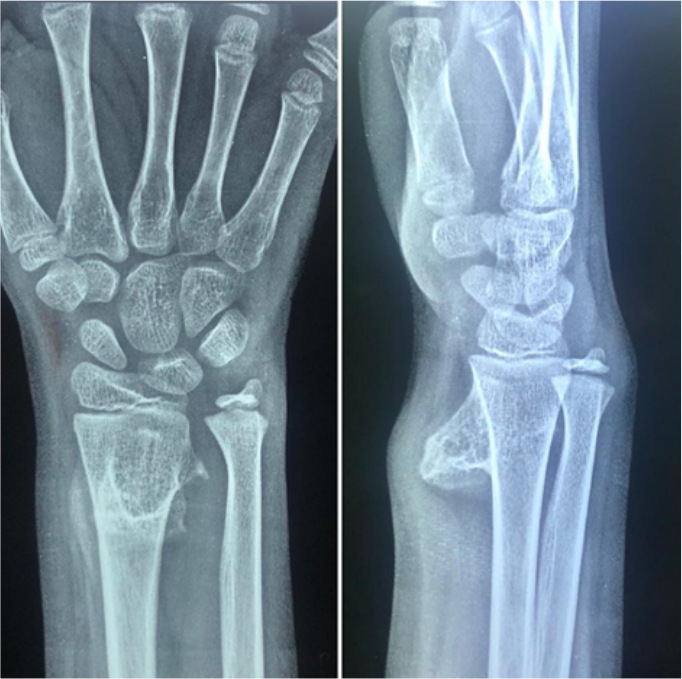