Total Hip Arthroplasty for Femoral Neck Fracture in the Setting of Challenging Extraction of an Intramedullary Femoral Nail: A Case Report

A cortical window technique for partial intramedullary nail resection and cemented stem implantation is a viable solution to facilitate a hybrid THA for displaced femoral neck fractures in the setting of challenging intramedullary femoral nail extraction.

Introduction
It is projected that there will be approximately 300,000 hip fracture cases annually in the United States by the year 2030, with approximately half being femoral neck fractures [1]. This number will continue to grow exponentially by the year 2050 [2, 3] and have significant patient morbidity and mortality as well as a large economic burden. The current standard of care for the treatment of displaced, intracapsular femoral neck fractures in active elderly patients (>65 years), particularly those with pre-existing arthritis, is total hip arthroplasty (THA) [4, 5]. Performing THA for femoral neck fracture in the setting of a pre-existing intramedullary nail can be technically challenging and carries a higher complication profile compared with routine THA [6]. Despite several tips and tricks for nail removal [7, 8, 9], attempts may be ultimately unsuccessful without causing significant damage to host bone. We present the following case of a patient who required a unique technical solution to implant a THA for a displaced femoral neck fracture in the setting of challenging intramedullary nail extraction.

Statement of informed consent
The patient was informed that data concerning the case would be submitted for publication and he gave his consent.

After medical optimization, he was taken to the operating room within 24 hours for nail extraction and a cemented THA. The patient was positioned in a lateral decubitus position and the previous incision for the femoral nail was extended distally and a modified Hardinge approach was undertaken. The anterior femoral neck and piriformis fossa nail entry site were exposed and the femoral head was removed. In preparation for nail extraction, the nail cap was removed and the appropriate threaded nail extraction device was inserted. The proximal and distal interlocking screws were then removed. Flexible osteotomes were used to clear the cancellous bone surrounding the nail proximally. Extraction was attempted but the nail appeared to be well fixed distally. The distal screw hole was drilled to remove any bridging bone, and a ball-tipped guide wire was inserted through the nail and passed successfully. Extraction was attempted again but without success.A medial parapatellar approach to the knee was then performed and a retrograde nail starting point was determined under fluoroscopic guidance. An opening reamer was utilized and a bone tamp was inserted flush to the distal end of the nail for attempted retrograde extraction. Flexible osteotomes were then used to free any bone surrounding the distal ends of the nail, as well as into the longitudinal slot distally. Despite all attempts the nail appeared well fixed, and as a result of the repeated impaction, a non-displaced distal femur fracture was sustained. At this point, the proximal as well as the original distal interlocking bolt were reinserted along with another distal interlocking screw to stabilize the femoral shaft (Fig. 2). The decision was made to return to the operating room at a later date with more equipment to facilitate extraction. 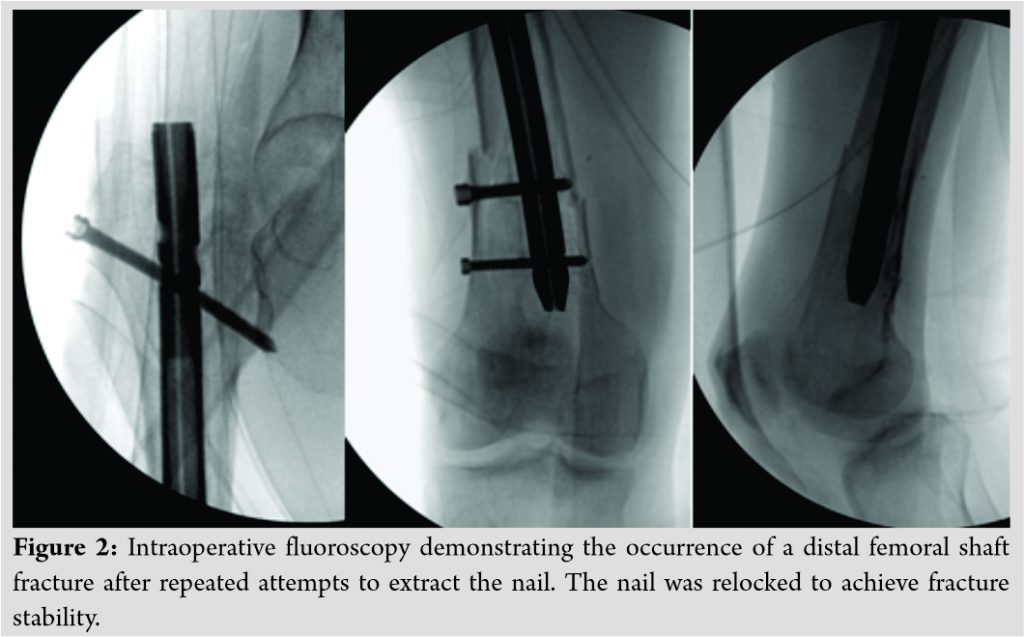 Surgical technique
The patient returned to the operating room 2 days later for a secondary attempt at nail removal and THA. A plan was made to cut the nail proximally, at a length allowing for a cemented stem total hip, with the residual nail in place. Options to access and cut the nail included an extended trochanteric osteotomy (ETO), longitudinal femoral split, or a cortical window approach. Using the same incision, approach, and exposure with distal extension, a minimum diameter trephine (14.5 mm) which could easily pass over the nail proximally was chosen and was advanced over the nail in an antegrade fashion (Fig. 3). 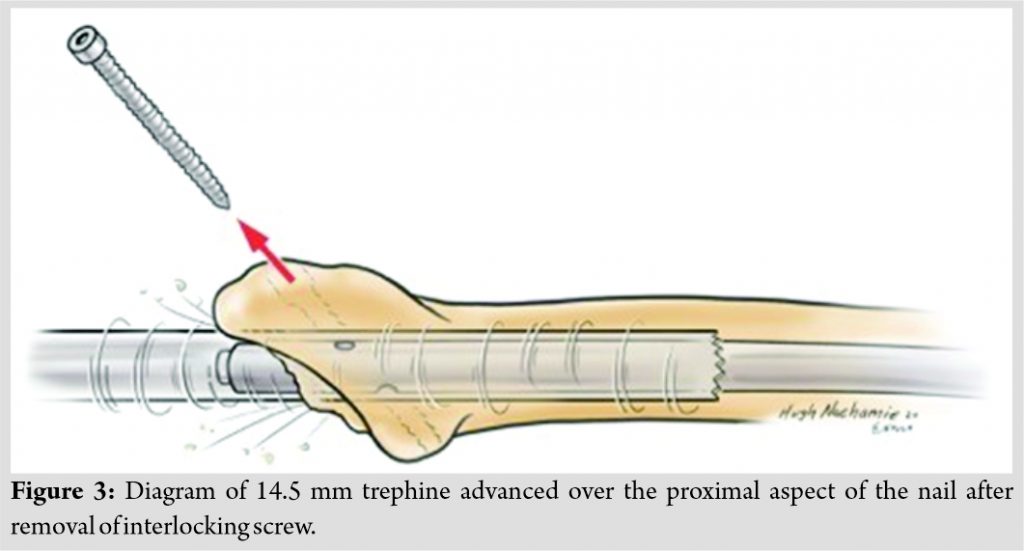 The point at which the trephine stopped advancing as limited by the anterior bow of the femur was marked on the femoral cortex (~12 cm distally from the calcar) through a split in the vastus lateralis (Fig. 4). 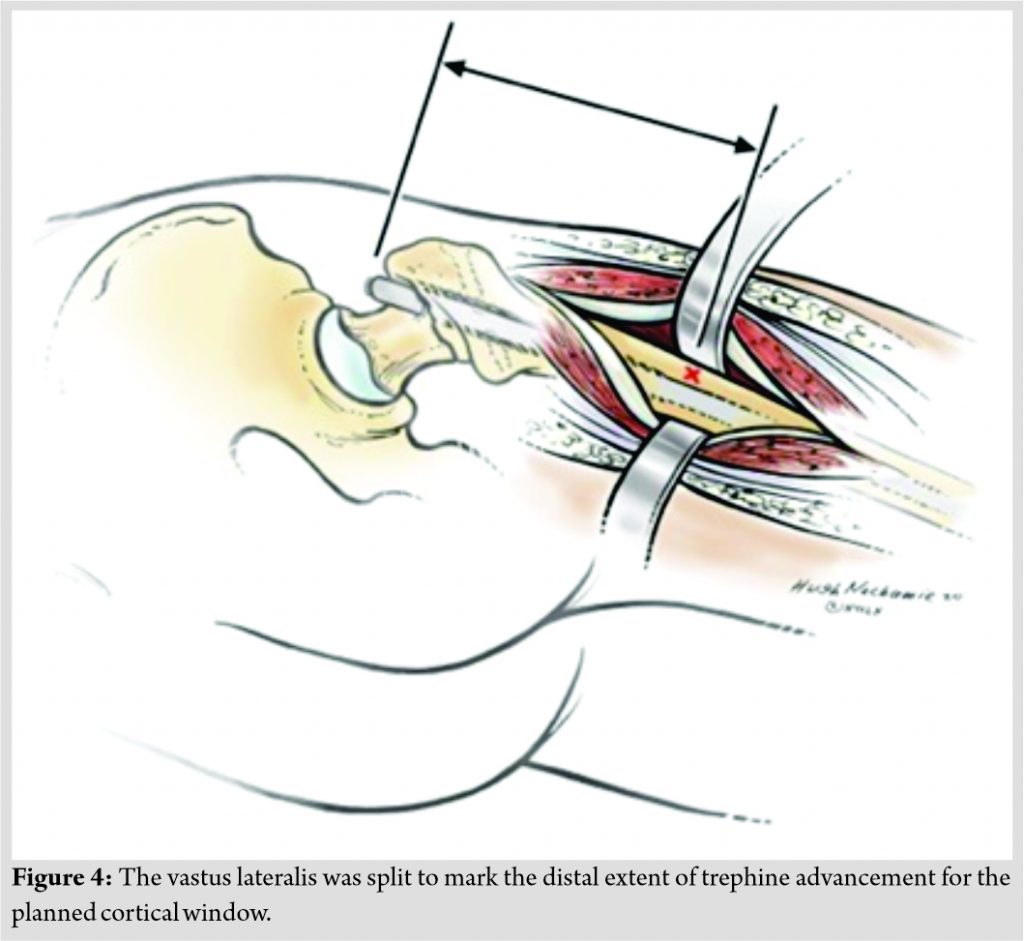 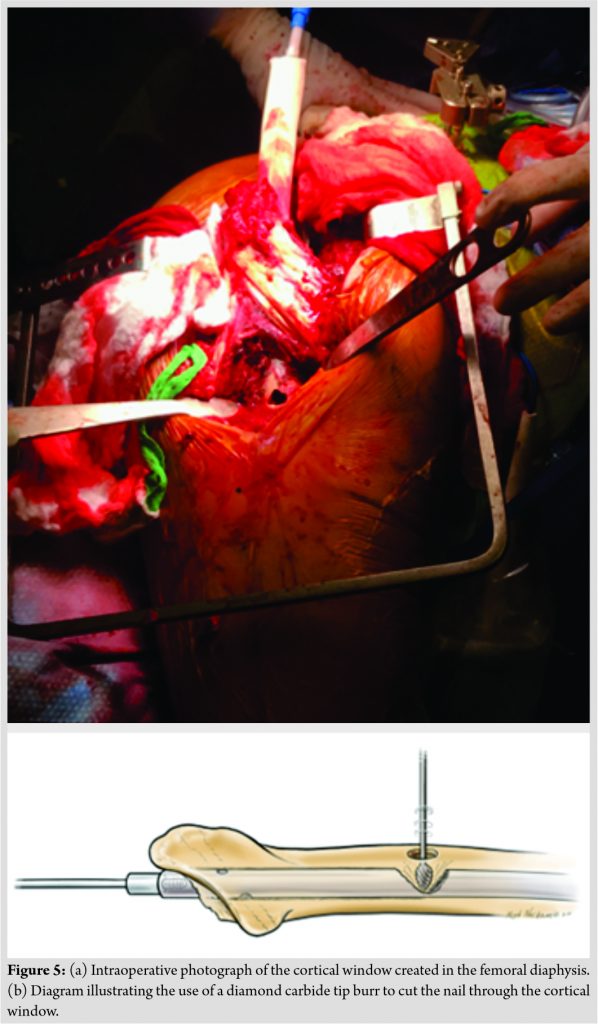 Care was taken to avoid perforating the far cortex at this level while cutting the nail through the window. The extractor was then used to remove the proximal portion of the nail (Fig. 6). 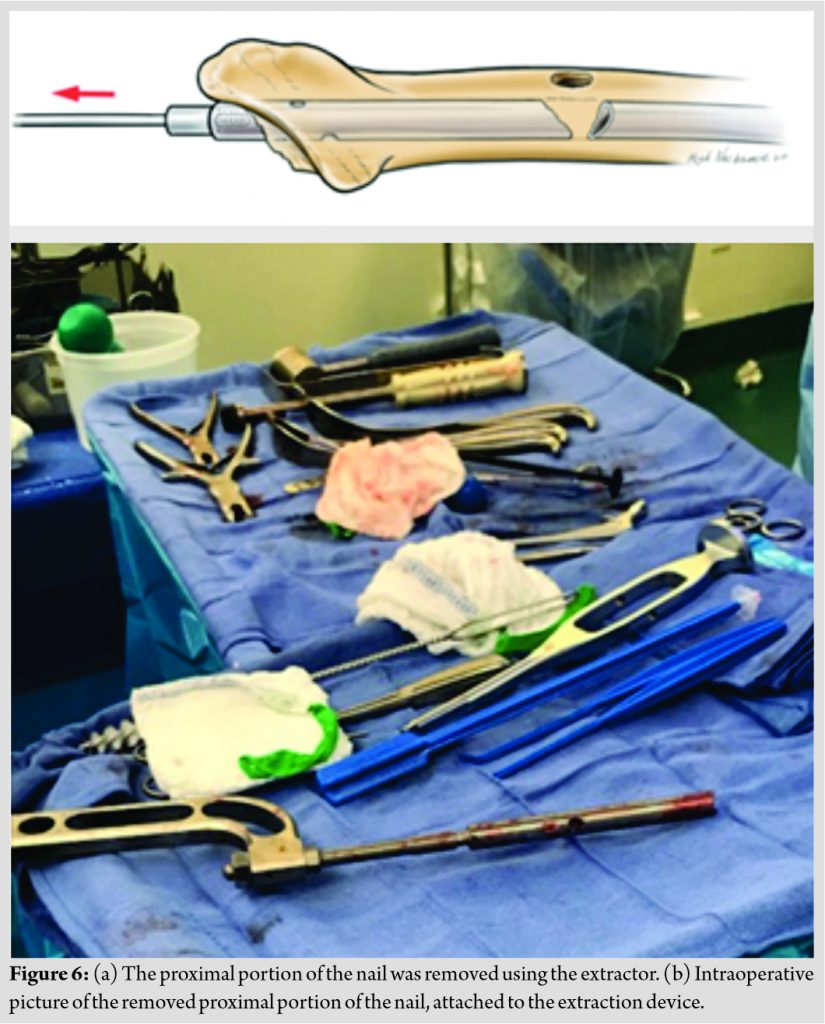 The femoral broach for the appropriate size stem (Synergy, Smith and Nephew, Cordova, TN, USA) was inserted into the canal with the distal tip entering the nail as a trial for the final cemented stem (Fig. 7).

The acetabulum was then reamed and a dual mobility acetabular component with a modular cobalt chrome liner (Trident, Modular Dual Mobility, Stryker, Mahwah, NJ, USA) was implanted. The femoral canal was then irrigated thoroughly and dried, and vacuum-mixed polymethylmethacrylate bone cement (Simplex, Stryker) was pressurized into the canal using a cement gun (Fig. 8).

The interlocking screw holes and distal cortical window were digitally covered to prevent cement extrusion. The final stem was then inserted with the tip entering the nail distally and held in the appropriate anteversion of 15 degrees (Fig. 9).

The distal interlocking screws were then removed, and the distal femoral fracture was reduced using indirect reduction techniques. A pre-contoured lateral distal femoral locking plate (Stryker, Mahwah, NJ) was applied percutaneously through a limited lateral approach to the distal femur and used to span the stem/nail overlap proximally (Fig. 10).

Post-operative course
The patient was allowed weight bearing as tolerated and was discharged home 7 days postoperatively after mobilizing with inpatient physical therapy. He was most recently seen at the 3-month follow-up and has been ambulating outdoors with minimal pain at the knee, using a walker. Hip and knee range of motion was painless, ranging from 0 to 90 and 5 to 115 degrees, respectively. Plain films demonstrated maintained alignment of the cemented THA and increased callus formation at the distal femur fracture site (Fig. 12).

Discussion
THA for displaced femoral neck fractures can be technically challenging in the setting of retained remote intramedullary nails that are challenging to extract. In the setting of primary hip osteoarthritis with a retained nail, a metal on metal hip resurfacing arthroplasty may be considered [10], however in the setting of a displaced femoral neck fracture, this is not an option. There are no currently published reports using this cortical window technique of partial nail resection followed by implantation of a cemented femoral stem for THA. The other solutions available included an ETO and longitudinal femoral split, both carrying high morbidity and risk of nonunion with the use of a cemented implant. A case report exists, demonstrating partial nail resection through an ETO followed by cemented stem placement and ETO cable repair, for hip osteoarthritis in the setting of a retained femoral nail with difficult extraction [11]. The use of an ETO is a powerful technique in removing well-fixed femoral stems in revision THA, however, at the cost of blood loss, post-operative pain, and the risk of nonunion. Partial nail resection through a cortical window as performed in this case may achieve the same goal, but with the risk of diaphyseal cortical perforation. Therefore, adequate visualization through the window must be achieved and caution must be taken when using the burr to cut the nail inside the canal. Cemented stem fixation has been shown to have a significantly lower risk of periprosthetic fracture, stem subsidence, and aseptic revision compared with uncemented fixation in THA and hemiarthroplasty for femoral neck fracture, in multiple studies [12, 13, 14].
Furthermore, a pre-contoured distal femoral locking plate was used to stabilize the distal femoral fracture as well as span the cortical window and overlap between the nail and stem to prevent a stress riser; this is important in preventing further fractures. This also achieved adequate fixation to allow early weight-bearing, which is important in preventing cardiopulmonary complications and decubitus ulcers from prolonged immobilization in the setting of hip fractures. In the present case, a dual mobility acetabular construct was used given concerns over the patient’s risk of dislocation. The use of dual mobility acetabular components in THA has become increasingly popular in revision THA and THA for femoral neck fracture, given the decreased risk of instability compared with standard single articulation between a unipolar head and a polyethylene liner. The theoretical benefits of decreased instability in higher risk patients such as those with femoral neck fractures have led to an increase in the use of these components for this indication with low rates of early extra-articular dislocation (2.3%), intraprosthetic dislocation (0.18%), and aseptic loosening (0.18%) [15]. Longer term studies are needed to validate these rates in the femoral neck fracture patient population.

Conclusion
A cortical window technique for partial intramedullary nail resection may be a viable solution to facilitate a hybrid THA for a displaced femoral neck fracture in the presence of challenging intramedullary femoral nail extraction.

Clinical Message
Using a cortical window and partial nail removal technique may be a feasible solution to allow performing a THA for a femoral neck fracture in the setting of a challenging intramedullary femoral nail extraction. 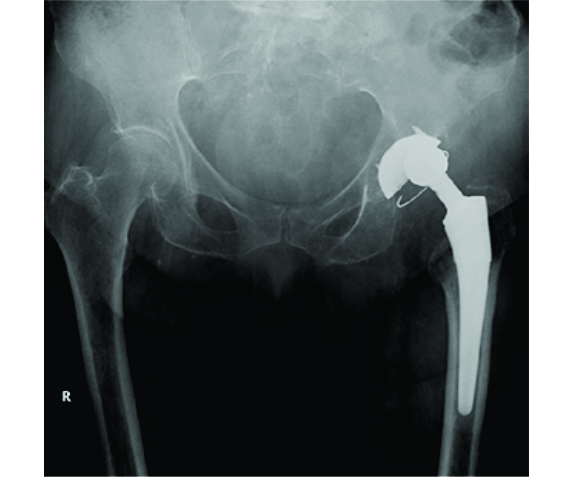 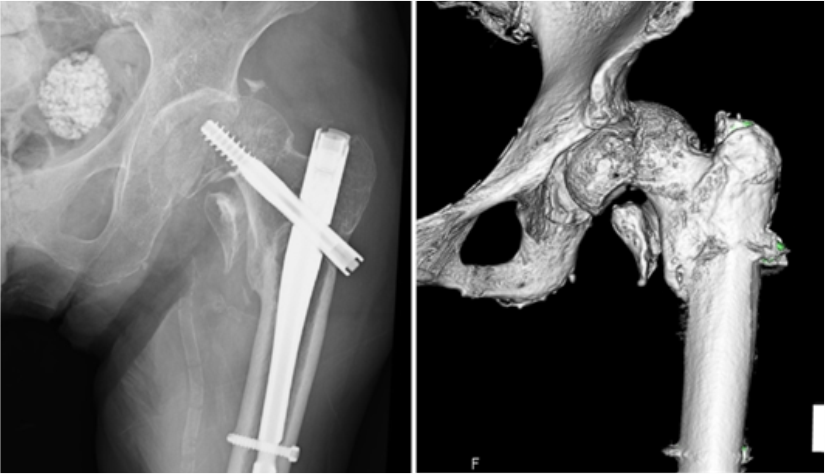 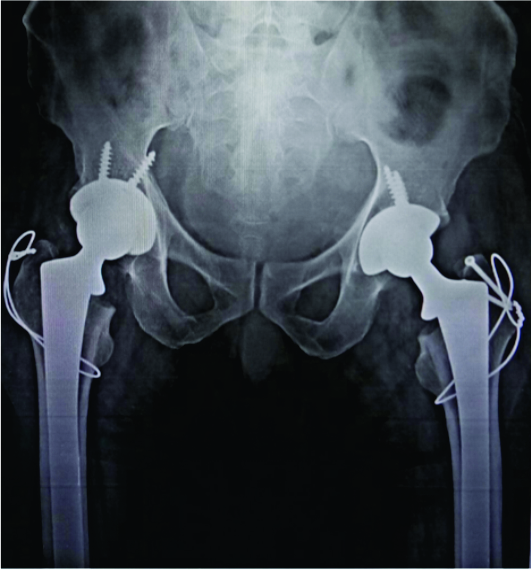