Case Report
We present a case of a 17-year-old girl with burst fractures of L2, L3, and L4 vertebrae with neurological compromise. The patient presented to the emergency department with an alleged history of fall from height (10 feet) at school, followed by sudden onset weakness of both lower limbs. There was no history of loss of consciousness, vomiting, ear, nose, throat bleed, or seizures. She was shifted from her residence to the emergency department in our hospital on spine board by qualified paramedical staffs. On arrival, she was conscious, oriented, and her vital parameters were stable. She did not have any external injury or bony tenderness over limbs except deep tenderness over lumbar spine. Neurological examination revealed bilateral foot drop and toe extensor weakness. Bladder incontinence was noted during transfer by paramedics and a urinary catheter was placed.

Lumbar spine radiographs indicated loss of vertebral height at L2, L3, and L4 vertebrae (Fig. 1). Computerized tomography scan of lumbar spine revealed burst fractures of L2, L3, and L4 vertebrae with the involvement of both anterior and middle columns with retropulsion of bony fragments at all the levels (Fig. 2). There was large retropulsed fragment at L4 level causing 80% canal encroachment. Small retropulsed fragments at L2 and L3 level were seen causing 50% and 30% canal encroachment, respectively. Magnetic resonance imaging scan reported thecal sac compression with retro pulsed fragments at all the three levels (Fig. 3). Patient was planned for minimally invasive posterior stabilization and anterior hemi-corpectomy of L2, L4, and fusion. Since the retropulsed fragment at L3 was not causing significant canal compromise, it was decided to spare L2-L3 disc.

Procedure
Patient was positioned prone under general anesthesia. Cannulated 6.5 mm pedicle screws were inserted in L1 and L5 pedicles on either side percutaneously under C-arm guidance (Longitude™, Medtronic, Minneapolis, USA). Pre-contoured rods were inserted through separate stab incision above the cephalad pedicle screws and slid in a controlled manner into the tulips of L1 and L5 pedicle screws. Once the position of the rods was confirmed, the set screws were tightened to the tulips to complete the construct. Wound closed in standard fashion. Patient was then re-positioned in a right lateral position. Anterior retroperitoneal approach was utilized to expose L1 to L4 vertebrae. L1-L2 and L3-L4 discs were identified with image intensifier and excised with the help of rongeurs and bone nibblers. Partial corpectomies of superior one-third of L2 and L4 vertebrae were done to expose the retropulsed bony fragments. Retropulsed bony fragments were removed and dura was decompressed. The adequacy of dural decompression was confirmed by palpating the dura with Penfield Dissector from near pedicle to far pedicle. End plates were prepared and the hemicorpectomy defect was reconstructed with appropriate size titanium mesh cage filled with bone graft. The stability of the cages was confirmed on table and the position was verified under image intensifier. Wound was closed in layer over subfascial drain. Postoperatively patient was mobilized with lumbosacral belt aided by ankle-foot orthosis (AFO) for the bilateral foot drops. She underwent aggressive physiotherapy and rehabilitation under the care of the physiotherapy department. At 3 months, she was able to walk with single elbow crutch with AFO. At 6 months, she recovered completely neurologically and was able to walk without support as well as manage stairs without aids. Follow-up X-ray at 6 months documented sound fusion at L1-L2 and L3-L4 levels with the presence of a bony bridge anterior to the cages (sentinel sign). L3 fracture also healed satisfactorily (Fig. 4). The patient also recovered bowel and bladder function by the end of 9 months. Posterior implant removal was done after 1 year to regain movements at unfused L2-L3 and L4-L5 levels.

Discussion
Denis [2] has described burst fractures as failure of anterior and middle columns with retropulsion of bony fragments into the vertebral canal. Burst fractures resulting from axial compressive load occur in 10–20% of all the spine fractures [3]. Most common anatomical location for burst fractures is the thoracolumbar junction, where the stiff thoracic spine meets the more flexible lumbar spine. Burst fractures of the lower lumbar spine, due to its flexible biomechanics, represent a smaller subset of all spine fractures [4, 5]. Due to the considerable forces acting on the vertebrae in the higher velocity injuries, multiple burst fractures are commonly seen and are more often non-contiguous [6, 7, 8]. Patients presenting with thoracolumbar injury require a thorough evaluation to detect any other spine injury, incidence of which can be as high as 25% [9]. Contiguous level burst fractures in dorsal and cervical spine are reported [10]. We did an extensive literature review for contiguous level lumbar burst fracture using keywords, “lumbar”, “burst”, “multiple”, and “contiguous” in Pubmed database. Two cases of two-level contiguous lumbar burst fractures have been reported previously. Youssef et al. described seizure associated two-level contiguous lumbar burst fracture [11] and Motsitsi et al reported two-level contiguous lumbar burst fracture following direct trauma to the spine. However, to the best of our knowledge, there are no case reports of contiguous lumbar burst fractures involving three levels. The treatment goals for patients with lumbar spinal injuries are to maintain or restore spinal alignment and stability, decompress to promote neurologic function, mobilize the patient, and start rehabilitation as soon as possible [12, 13]. There is debate as to optimal treatment of the lower lumbar burst fractures [14, 15]. Surgical treatment options for management include a posterior alone, anterior alone, or combined anterior, and posterior approaches [16, 17, 18, 19]. Long segment posterior stabilization and fusion surgeries should be avoided to conserve motion segments in the lumbar spine [20]. Posterior “short segment” fixation can avoid fusing multiple levels in the lumbar spine, but are prone to serious complications. Higher rate of implant failure ranging from 9% to 54%, pseudarthrosis, infection, and increase in kyphosis reported in the literature due to lack anterior column supports [21, 22, 23]. In a prospective study by Korovessis et al. compared the results of the combined anterior-posterior surgery with posterior “short-segment” transpedicular fixation and found that although intermediate screws were inserted in the fractured vertebra, the resultant construct did not prevent the average 5° loss of correction at the final evaluation [3]. Combined anterior and posterior surgical approaches provide improved sagittal alignment, immediate, and complete neural decompression for optimum recovery of neural function, and stabilization of the disrupted posterior ligamentous complex [24]. In our institute, any patients with burst fractures without neurological deficits and with a retropulsed fragment causing <50% canal compromise is managed with posterior stabilization alone. Anterior decompression and reconstruction are reserved for patients with canal compromise of more than 50% with neurological deficits or with severely comminuted anterior vertebral body [25, 26]. Since this patient had unstable three-level burst fracture with canal compromise, we proceeded with minimally invasive posterior stabilization and anterior partial corpectomy at L2 and L4 levels where canal compromise was more than 50%. In summary, patients with multilevel burst fractures require a careful clinical and neurological assessment. The treatment of multilevel burst fractures must be individualized, and each fracture should be treated according to its inherent stability.

Clinical Message
Multiple contiguous burst fractures in lumbar spine are a rare entity. We present the case of a patient with contiguous three level lumbar burst fractures following a fall from height. To the best of our knowledge, this is the only case of such injury reported in English literature. The treatment requires thorough assessment of the fracture pattern and often requires a combination of surgical approaches. Treatment of each fracture is individualized and depends on fracture patterns. 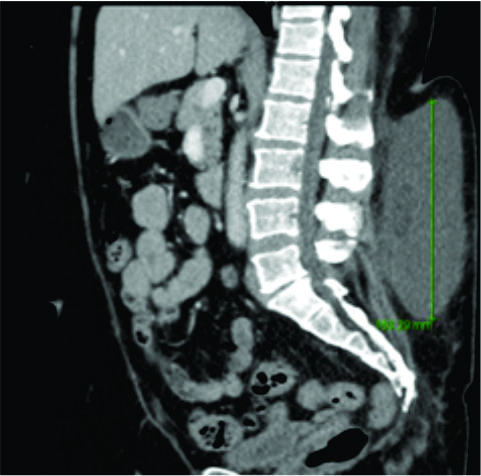 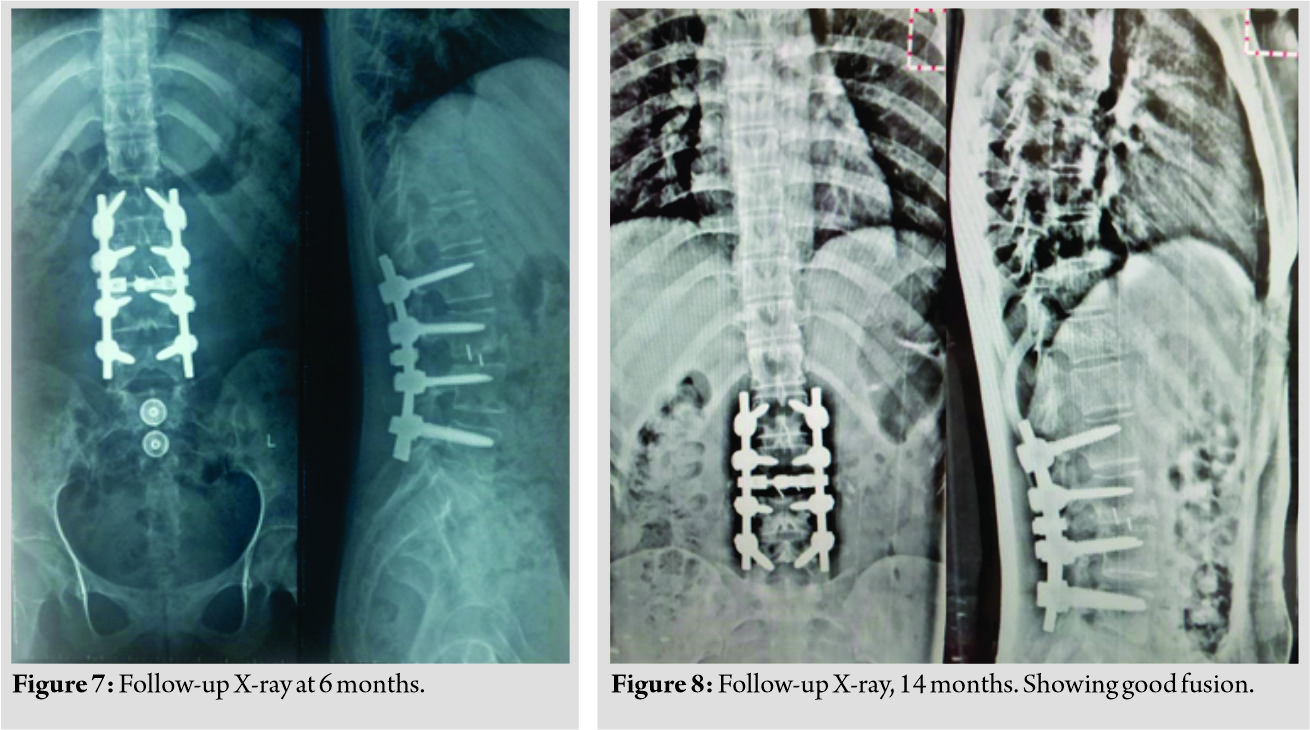