Exchange nailing and the use of opposite side IMN were useful for the revision of post-operative non-union of atypical femoral fractures with lateral bowing.

Case Presentation
The case was an 84-year-old woman. She had undergone total knee arthroplasty for osteoarthritis 3 years before. She had been using oral alendronate (35 mg) tablets once a week for 7 years for the treatment of osteoporosis. She fell after she felt a pain in her right thigh while walking and consulted a local doctor. A radiographic examination revealed a non-comminuted oblique fracture at the subtrochanteric level of the left femur (Fig. 1a, b). In addition, the hypertrophic lateral cortex or subperiosteal hypertrophy was observed in the fractured part (Fig. 1a: 1). The hypertrophic lateral cortex or subperiosteal hypertrophy was also observed in the unaffected femur, which was laterally bowed by 9° (Fig. 1c: 3). Her fracture fulfilled four major and three minor ASBMR diagnostic criteria for atypical femoral fractures (Fig. 1).

The previous doctor had performed a surgery using an antegrade IMN, long Gamma 3 nail (diameter, 10 mm; length, 280 mm, Stryker, Schonkirchen, Germany). Retrograde IMNs were not indicated because she had undergone total knee arthroplasty (Fig. 1c: 2). A sufficiently long IMN could not be used because the IMN interfered with the cortical bone due to femoral lateral bowing (Fig. 2a). The patient was referred to us 12 weeks postoperatively. Oral alendronate was discontinued. Instead, the patient consented to empirical therapy with teriparatide at 20 μg/day, which is a dose approved for the treatment of osteoporosis. Oral alendronate was discontinued because BPs inhibit the bone remodeling process. We expected that teriparatide would promote bone union. Instead of oral alendronate, teriparatide was administered at a daily dose of 20 μg, which is its therapeutic dose for osteoporosis. However, bone union was not observed even 11 months after surgery, and thus, a diagnosis of nonunion (hypertrophic nonunion) was made (Fig. 2b). The intensity of femoral pain increased during walking 13 months postoperatively. A radiographic examination revealed the fractured IMN (main nail breakage) (Fig. 2c). The patient provided informed consent in writing to disclosure of surgery-related technical and patient information.

We planned a revision surgery for post-operative non-union of the atypical proximal femoral fracture. A two-dimensional template was used to simulate the IMN (Fig. 3). Zimmer Natural Nail Antegrade Femur (ZNN IMN, diameter, 11 mm; length, 380 mm, Zimmer, Winterthur, Switzerland) was chosen as an IMN for revision surgery. Due to the advanced femoral lateral bowing deformity, a mismatch with the nail was noted when the unaffected femur was used to construct the template (Fig. 3a). When the opposite side nail (opposite side ZNN IMN system) was used as a template, the nail was aligned with the medullary canal, and the tip of the nail coincided with the center of the medullary canal; hence, the opposite side nail was chosen (Fig. 3b). Based on a report from Park et al. in 2016, an opposite side IMN fitting, the medullary canal was used to perform surgery [7]. The operation was performed with the patient in the lateral position on a radiolucent fracture table under fluoroscopy. A 7 cm horizontal skin incision was made at the fracture site (Fig. 4a). The existing IMN was removed, and the medullary canal was reamed to 13 mm. After the refreshment of the false joint, the lateral cortex was cut into a wedge shape using a chisel (Fig. 4b).

The proximal bone fragment was reduced to a valgus position using a clamp (Fig. 4c). The false joint was fixed using a cable (Cable-Ready System, Zimmer, Warsaw, IN) to maintain the reduction position. Then, the opposite side ZNN IMN was inserted (Fig. 5a). The IMN was inserted to the distal end. The nail was inserted in such a manner that the nail end overlapped with the femoral component of the prosthetic knee (Fig. 5b). The skin was sutured layer by layer before concluding the operation. For follow-up, the patient underwent radiographic examinations of the right femur 1 month, 2 months, 3 months, 5 months, 1 year, and 2 years postoperatively. Radiographical assessments of healing of the fracture confirmed callus formation and complete bone union 3 months and 1 year after the operation, respectively. As of 2 years postoperatively, she has returned to the normal level of activity and can walk without pain (Fig. 5c).

Femoral lateral bowing
Marcano et al. have reported that Asians are at a higher risk for atypical femoral fracture [11]. The femoral anterior radius of curvature in Americans was larger than that in elderly Japanese women; the femoral anterior radius of curvature was 1040 mm in the latter population, whereas it was 1200–1300 mm in the former population [12-14]. Thus, the shape of the femur may be a risk factor. Oh et al. have reported that femoral bowing deformity was associated with an increased risk for atypical fracture [15]. Fixation with full-length reconstruction nails is a standard procedure for the treatment of atypical femoral fractures, but the nail shape often does not fit the medullary canal morphology [3] due to femoral lateral bowing. Some surgical methods have been reported to address this problem.

Revision surgery
A reported method of revision surgery for delayed and incomplete union of atypical proximal femoral fractures is the combined use of an IMN and a lateral tension band plate with reduction to a valgus position after wedge excision of the lateral cortex [5]. The ASBMR has also recommended that the medullary canal should be over-reamed to a diameter at least 2.5 mm larger than the IMN diameter to compensate for the narrow medullary diameter before an IMN is inserted [3]. In the present case, an opposite side IMN fitted the medullary canal and was useful for revision surgery due to severe femoral lateral bowing. Park et al. has also reported that the opposite side IMN fitted the medullary canal of atypical femoral fractures with severe lateral bowing [7]. In the present case, the femur was bowed 9° (Fig. 6; lateral bowed femur with 9°). Due to the bowed femur, only a short nail was inserted in the initial operation. Figure 6c illustrates that a long nail cannot be inserted. It also shows that the IMN cannot slide within the medullary canal beyond a certain point where the distal end of the IMN comes into contact with the cortex due to lateral bowing of the femoral shaft (Fig. 6c: 4). In atypical proximal femoral fractures, involving fractures at proximal sites, the nail pushes the proximal bone fragment and makes it shift outward (Fig. 6c: 3). In such a case, the cable or plate is required to be reinforced. Alternatively, 9° correction is required when the ZNN IMN system is to be used after osteotomy at the center of femoral bowing (Fig. 6b). The main limitation of our study is related to the small sample size and study design.

Conclusion
A proposed treatment strategy for revision of post-operative non-union of atypical femoral fractures：A full-length reconstruction nail is used for fixation. If the nail cannot be inserted due to femoral bowing deformity, an opposite side IMN (opposite side of ZNN) can be combined with valgus osteotomy to use the full-length reconstruction nail for fixation. Particularly for atypical proximal femoral fractures, involving fractures at proximal sites, additional cables, or plates can be used to increase the fixation force. Exchange nailing and the use of opposite side IMN were useful for the revision of post-operative non-union of atypical femoral fractures.

Clinical Message
Exchange nailing as revision surgery for post-operative non-union of atypical femoral fractures combined with an IMN on the opposite side was useful. 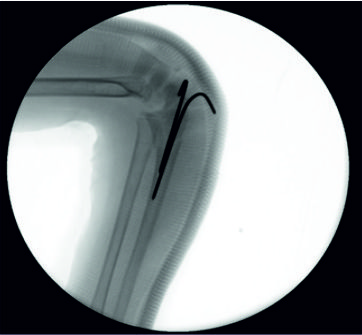 A Simple Technique for Removal of Interlocking Screw from an Intramedullary Nail: A Case Report...
A Technical Note on Making Patient-Specific Pedicle Screw Templates for Revision Pediatric Kyphoscol... 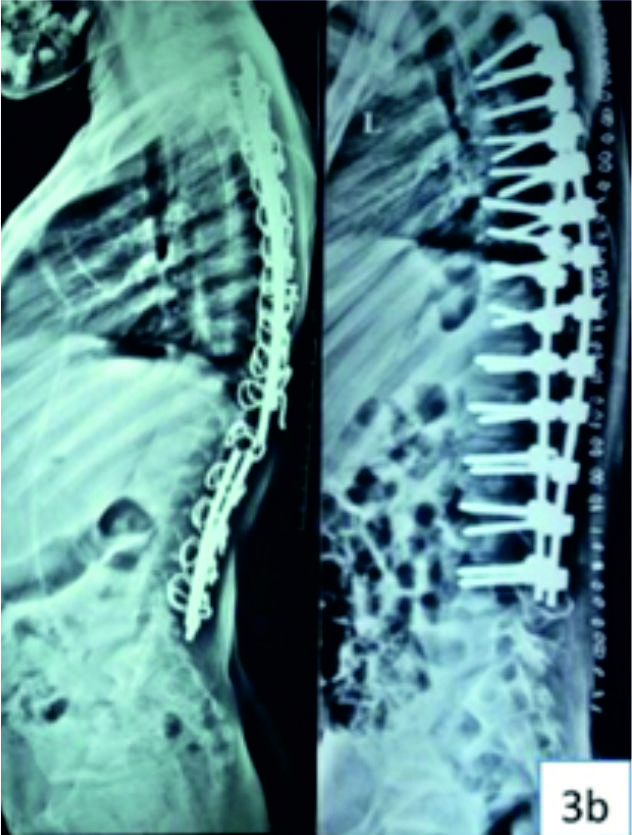 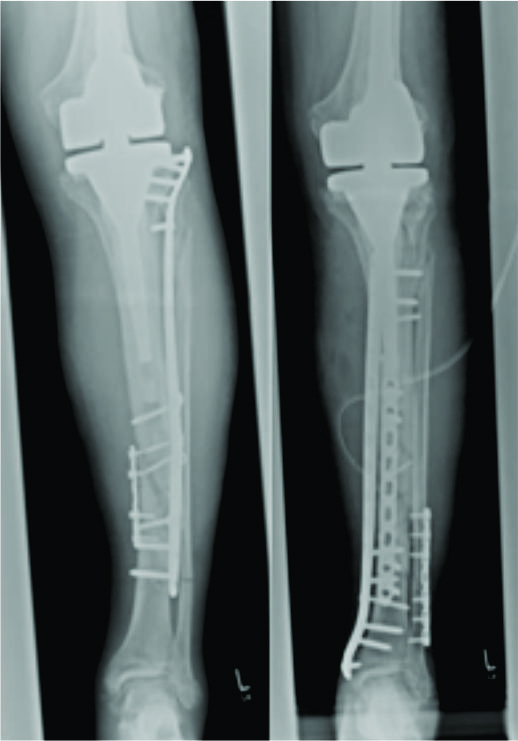