Case Report: A 24-year-old male presented with a right hip pain for 3 months after a heavy physical exercise during military training. The imaging exhibited a transcervical FNF with displacement and a potential of avascular necrosis (AVN). The patient was managed by Open reduction and internal fixation through surgical hip dislocation (SHD) and bone grafting from the right iliac bone. The patient returned to his full military services 14 weeks following the surgery and was followed for 3 years without any symptomatic or functional problems.

Conclusion: SHD could be one of the surgical options hired in the management of late presentations of FNFs in young adults with high suspicion of AVN.

Background
Femoral neck fractures (FNFs) in young adults are relatively uncommon emergency that requires diagnosis and management as early as possible to prevents joint complications [1, 2]. Pathak et al., in a prospective study, found that 14% of FNFs present with a delay in the diagnosis. The delay in the diagnosis was attributed to injury neglect and not seeking medical help, delay in the referral to Orthopedics Department, and missing of the diagnosis in the Emergency Department. [3] Avascular necrosis (AVN) and fracture non-union are the most unwanted complications that may result as a sequela of delayed diagnosis [2, 4]. FNFs are missed 20–50% of the time in the presence of ipsilateral concomitant femoral shaft fractures; therefore, the physical examination should be performed thoroughly, and the obtained images should be reviewed carefully [2, 5]. The treatment of choice for the high-energy FNFs in young adults is most commonly surgical. In this report, we present a case of young adult patient with a delayed diagnosis of FNF managed successfully by open reduction and internal fixation (ORIF) using surgical hip dislocation (SHD).

A 24-year-old male presented with a right hip pain and limping after fall from height during a heavy military exercise. He continued his military training without seeking medical advice. Three months later, the patient presented complaining about his condition; therefore, X-ray, magnetic resonance imaging (MRI), and computed tomography (CT) were ordered.

The X-ray showed displaced right FNF with varus deformity (Fig. 1). The CT scan showed transcervical FNF with displacement, heterogeneous sclerosis, and subchondral lucency at the right femoral head that might be a feature of AVN (Fig. 2, 3). The MRI could not definitively rule out the possibility AVN (Fig. 4). We explained to the patient the options of the procedures. Given the need for full exposure of the femoral head and acetabulum in order to role out AVN, we decided that the procedure would be ORIF with SHD and bone grafting from the right iliac bone. 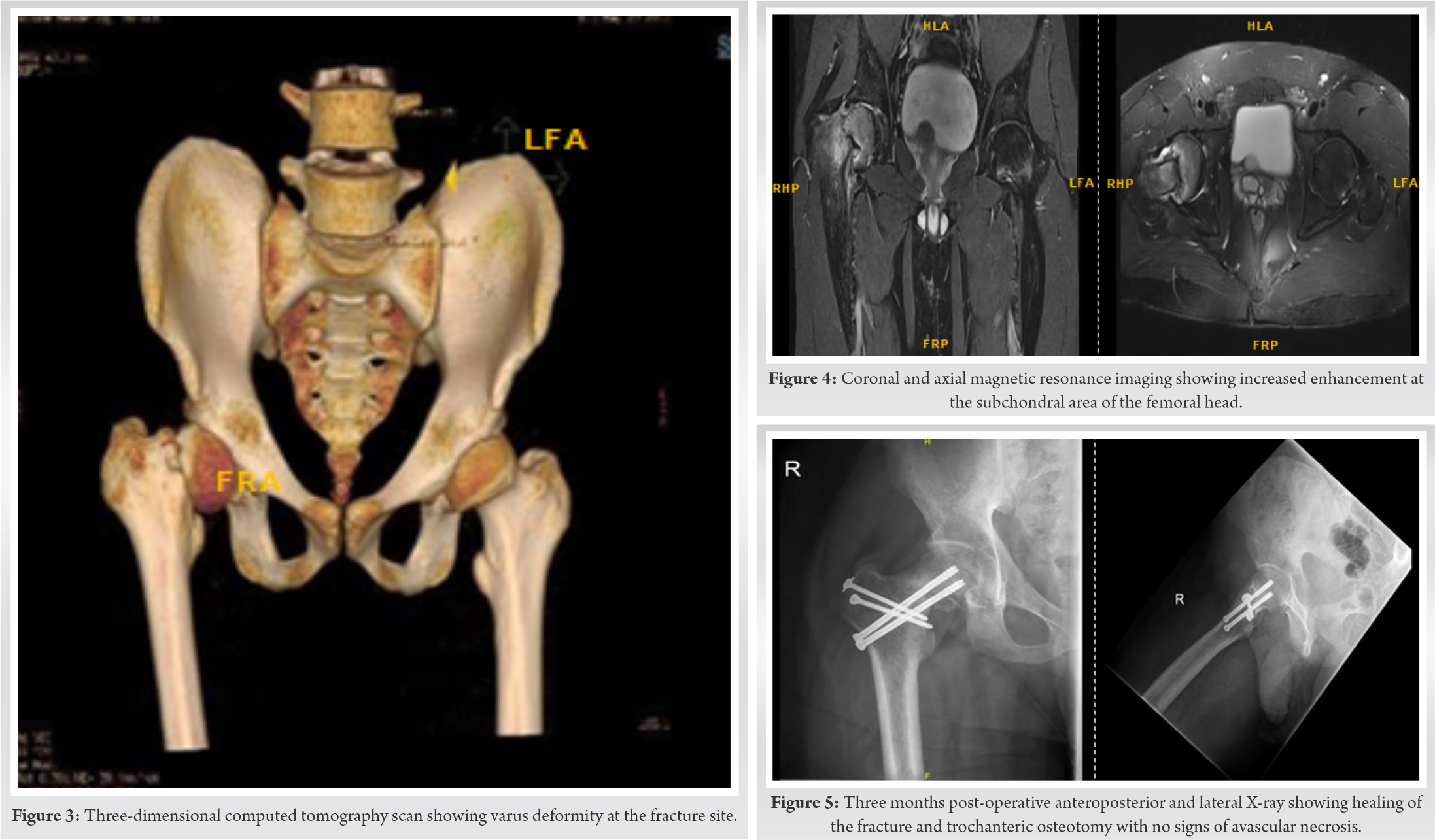 After general anesthesia, the patient was put on supine position and an incision was made over the right iliac crest to harvest a wedge of bone graft. The patient then was shifted to the lateral decubitus position with the right side up. The skin incision was done over the lateral aspect of the greater trochanter longitudinally and extended proximally (Gibson approach). The gluteus maximus was retracted posteriorly. Then, we identified the posterior aspect of the gluteus medius which was reflected anteriorly with the gluteus minimums from the capsule. After that, we identified the posterior part of the greater trochanter and osteotomized around 1–1.5 cm thickness of the bone with the attachment of the gluteus medius and vastus lateralis. With the leg flexed and slightly externally rotated the vastus lateralis and intermedius were elevated from the lateral and anterior aspect of the proximal femur. Care was taken to avoid injury to the sciatic nerve and medial femoral circumflex artery. Then, the entire flap including the gluteus minimus was retracted anteriorly and superiorly to expose the superior hip capsule. Once we had a good visualization to the capsule, a z-capsulotomy was made. After capsulotomy, a two smooth K-wires (2 mm) were used to fix the fracture in situ to avoid further displacement of fracture during hip dislocation and this fixation was done under the guidance of image intensifier. 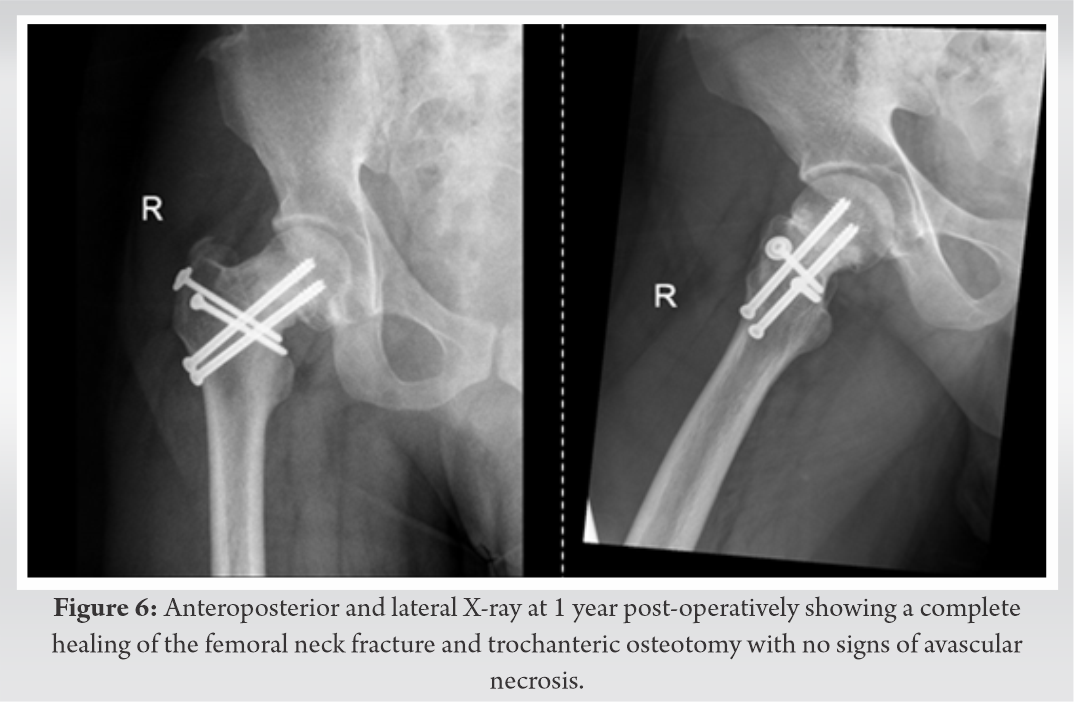 Then the hip was dislocated safely by flexion and external rotation of the right lower limb. The fracture was identified, the two k wires were removed, and the fracture site was cleaned. After that, the fracture was reduced, and the wedge of the bone graft was inserted at the inferior aspect of the fracture to support the reduction and to avoid further varus displacement. Vigorous reduction and manipulation of the fracture fragments were avoided in order to preserve the femoral head blood supply through the retinacular (subsynovial) vessels located on the posterosuperior aspect of the femoral neck. Two smooth pins through the fovea of the head were used to hold the reduction. X-ray was done intra-operatively to guide the reduction and fixation. Then two screws size 6.5 mm were used for definitive fixation of the fracture. Then, the capsule was closed and the trochanteric osteotomy was fixed with two 4.5 mm screws. Postoperatively, the patient was kept non weight bearing with range of motion exercises for 6 weeks; followed by partial weight-bearing for 2 weeks; and full weight-bearing advanced gradually over the next 4 weeks.

Patient returned to his full military services after 14 weeks after the surgery and was followed for 3 years without any residual symptoms or functional problems (Fig. 5, 6).

FNFs remains a significant challenge to manage either by arthroplasty or head salvage [2]. The treatment plan depends on patient’s age, fracture displacement, bone quality, timing of surgery, and patient’ activity level. For example, FNFs in healthy young active adult patients are best treated by ORIF [2]. However, FNFs in elderly patients are better to be managed by total hip arthroplasty (THA) as it provides a better hip function and lower reoperation rate compared to ORIF [6]. When fixation of FNF is indicated, the surgeon should determine whether the fixation will be performed through the open or closed approach [7]. Some surgeons prefer the closed reduction and internal fixation (CRIF) for non-displaced FNFs because of its advantages including decreasing the cost, operative time, and being less invasive. On the other hand, ORIF is the fixation method of choice in case of displaced FNFs as it provides a better visualization, facilitating the fixation of the fracture fragments, and the ability to perform decompression for a potential intra-capsule tamponade [2, 7]. However, none of the fixation approach (i.e. ORIF or CRIF) is considered optimal as long as it provides an adequate anatomical fixation of the facture fragments [7]. Our patient was young, active, and military soldier with neglected displaced FNF. Therefore, primary THA was reserved as the last treatment option. Furthermore, valgus osteotomy was one of the potential surgical options for such a case. However, it would be difficult to perform THA if the fixation with valgus osteotomy failed. Similarly, the management of this case was not found to be proper through CRIF due to the late presentation and significant displacement. Hereby, ORIF was found to be the most appropriate surgical intervention. The exposure for ORIF can be achieved by two classical surgical approaches; the modified Smith-Peterson (i.e., anterior approach) and Watson Jones (i.e., anterolateral approach) [2, 7, 8]. A larger exposure to the proximal femur is provided by the Smith-Petersen compared to the Watson-Jones approach, enabling better assessment and more accurate fracture fixation [8]. However, our patients had a potential of AVN that could not be definitely ruled out with imaging and full exposure to the femoral head was needed. Therefore, SHD was hired as it is the only surgical approach that provides 360° exposure to the femoral head and acetabulum. SHD is usually indicated in hip conditions, such as femoroacetabular impingement, Perthes’ disease, slipped capital femoral epiphysis, and other intraarticular pathology such as synovial osteochondromatosis of the hip [9]. It also was used in the management of acetabular fractures, displaced femoral head fractures in young adults, and unsuccessful hip arthroscopy [10]. We believe that this is the first case in which SHD is hired to provide an adequate exposure for ORIF in the management of FNF.

SHD could be one of the surgical options hired in the management of late presentations of FNFs in young adults with high suspicion of AVN.

FNFs in young adults considered to be rare emergency nowadays, yet delayed diagnosis is associated serious complications. SHD can be used in ORIF of FNFs when AVN is suspected and adequate exposure to the femoral head and acetabulum is required. 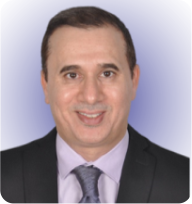 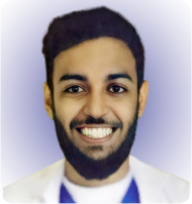 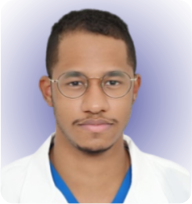 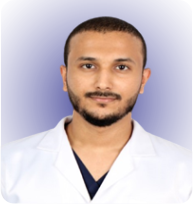 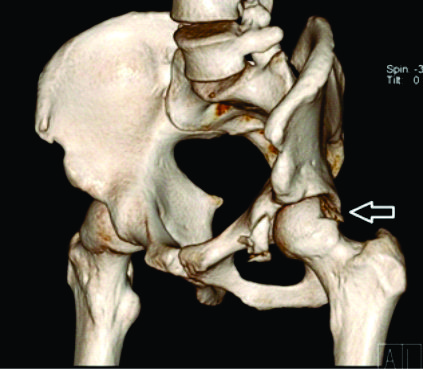 Pediatric Femoral Neck Fractures after Sliding in a Water Slide: A Case Report of Two Patients...

Total Hip Arthroplasty for Femoral Neck Fracture in the Setting of Challenging Extraction of an Intr...
Hemiarthroplasty of the Hip in a 52-Year-old Patient with Osteogenesis Imperfecta-Related Femoral Ne... 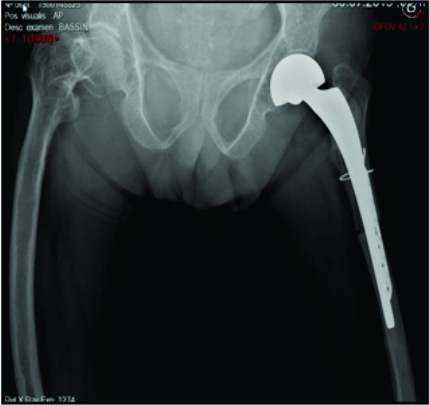