Outcomes of Tumor Resection and Reconstruction by Megaprosthesis around Knee: Our Experience

Introduction: In this modern era, limb reconstructive surgeries have become a standardized procedure for malignant tumor of lower limbs. We performed limb salvage surgeries for tumor around the knee with en bloc resection and subsequent reconstruction with a megaprosthesis.

Methods: A total of six cases of malignant and locally aggressive tumor around the knee were operated on from 2017 to 2018, with resection and mega prosthetic reconstruction. Interpretation of functional outcome after surgery was performed with musculoskeletal tumor society (MSTS) score. Complications such as infection, local recurrence of tumor, implant failure, and distant metastases were evaluated during each follow-up.

Results: Postoperatively, one patient developed superficial infection; one local recurrence with metastasis and the rest cases were uneventful. Patients were regularly followed for atleast1 year, and none of them developed any sign of deep infection, implant failure,or loosening. At the beginning of treatment, the average MSTS score was 8.83, which showed a significant increment to 25.83 after 12 months of follow-up.

Conclusion: Albeit few cases were operated on, we draw this inference from our short-term experience that mega prosthesis acts as a boon to orthopedic surgeons in musculoskeletal tumor management, thereby uplifting the quality of life of patients even during terminal care.

Limb rescue procedure, at present an acknowledged bone tumor treatment strategy, has customarily been a troublesome issue for orthopedic surgeons. Limb salvage procedure incorporates the entirety of the careful methods intended to achieve expulsion of a harmful tumor and recreation of the appendage with a worthy oncologic, practical, and corrective outcome. Nowadays, limb rescue strategies are routinely practiced in around 90% of cases of musculoskeletal tumors involving appendages [1]. This sensational change came to fruition as the after effect of three significant advancements, for instance, effective chemotherapy, improved exactness of imaging procedures, and advances in the reconstructive surgical procedure. Right now, the three generally well-known choices for reconstruction are utilizing an endoprosthesis, allograft-prosthetic composite, and biological reconstruction through vascularized graft [2]. Every one of these techniques has its short- and long-haul favorable circumstances and impediments. Reproduction with a particular handcrafted oncological endoprosthesis (megaprosthesis) has become a typical method these days. This procedure provides a challenging and useful appendage leading to immediate weight-bearing and permitting the early inception of a post-operative recovery program [3]. In this way, expanding quantities of patients experience mega prosthesis recreation after resectioning a dangerous bone tumor and some other nonmalignant conditions. In this narration, we like to share our experience while tackling such elephantine assignments with megaprosthesis assistance.

A total of 6 patients, four being male and two of them female, were operated on by resectioning tumor and reconstruction with cemented RESTOR modular resection prosthesis system (ADLER™) between 2017 and 2018. The median age of patients was 50 (33–67). Each patient had undergone investigation on tumor profile assessment such as routine blood workup, radiograph of the involved area, pre-anesthetic check-up, PET scan for distant metastases, HRCT thorax, and MRI of the involved extremity. After doing all non-invasive investigations, patients undergo core needle biopsy from the lesion following the biopsy’s mandatory principles. The determination was osteosarcoma involving the distal femur in 4 patients and giant cell tumor (GCT) affecting the proximal tibia in one patient and distal femur in the other (Table 1). Tumors were categorized according to the Enneking grading system [4]. According to the oncology department’s standard protocol, a neoadjuvant chemotherapy regime was received by patients with osteosarcoma. Neoadjuvant denosumab was given to one case of giant cell tumor [5]. The careful approach was performed by the general standards of limb rescue procedure under antibiotic coverage, and the resection length was decided preoperatively by radiographic and other imaging techniques. We routinely performed a gastrocnemius flap in the proximal tibia resection and reconstruction to cover the prosthesis and obliterate the dead space. Postoperatively intravenous antibiotics were continued for 72 h, and a standard regime of thromboprophylaxis was followed. Patients were made to do the ROM exercises using a continuous passive motion machine and were allowed weight-bearing with assistance from post-operative day 2. Patients were regularly followed at 3rd week, 6th week, 3rd month, 6th month, and latest follow-up at 1 year. At every follow-up, the patient’s surgical site and general condition were analyzed for any signs of infection. Standard radiographs were taken to look for any implant loosening and local recurrence of the tumor. Functional outcomes were analyzed using the musculoskeletal tumor society (MSTS) scoring system for knee [6, 7]. The patient’s score was calculated preoperatively and postoperatively at the 3rd month and 1 year.

Out of six patients, one patient with proximal tibia GCT resection and reconstruction developed superficial surgical site infection, which was managed by continuing intravenous antibiotics for 2 weeks and delayed weight-bearing. Rest other cases were uneventful. None of the patients showed any sign of deep infection, implant migration or loosening. One case of osteogenic sarcoma of distal femur developed distant metastases, and local recurrence of tumor after 1 year of follow-up (Table 2). Pre-operative and post-operative radiograph of a patient with GCT and reconstruction with the mega prosthesis are shown in (Fig. 1a, 1b) and (Fig. 2a, 2b).

Functionally, all patients performed well, which was evident from the exponential increment of their average MSTS, scoring from 8.83 preoperatively to 23 at 3rd month and 25.83 and 1-year follow-up (Table 3). After 1 year of follows up of resection of GCT from distal femur and reconstruction with the mega prosthesis, patient with extension and flexion of knee joint shown in (Fig. 3a, 3b). 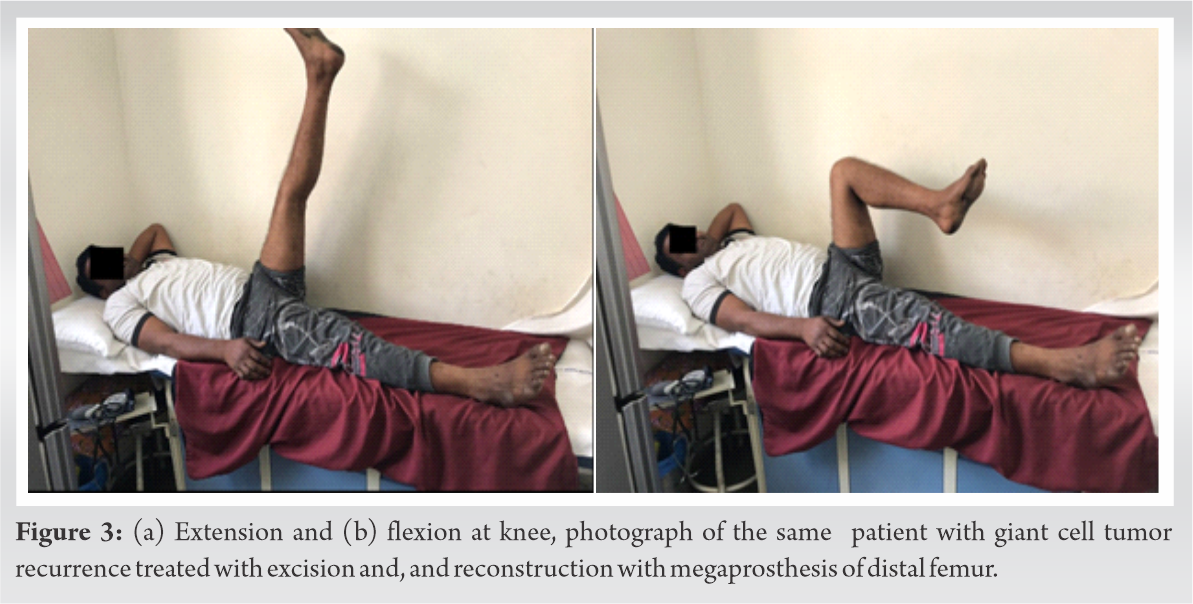 Conventionally, in the seventies and eighties, malignant tumor involving extremities were answered by an amputation with terrible endurance rates. With the advancement of increasingly viable chemotherapeutic agents, imaging modalities, and treatment ace protocols, survival rates have improved. This permitted the surgeons and oncologists to move their focus to limb safeguarding [1]. Different remaking alternatives are accessible for the recreation of the distal femur and proximal tibia following tumor extraction that incorporates mega prosthesis, extracorporeal irradiation autograft, and resection arthrodesis [8]. The upsides of the mega prosthesis, around knee remaking, is that it permits the patients to do quick weight-bearing, allowing maintenance of joint versatility and helps in early come back to exercises [9]. Right now, patients with mega prosthesis showed great practical result with a significant to phenomenal increase MSTS score. However, the mega prosthesis has the confinement of long-haul endurance and significant expenses. Our patients with megaprosthesis showed great useful result with impressive MSTS score in this examination. 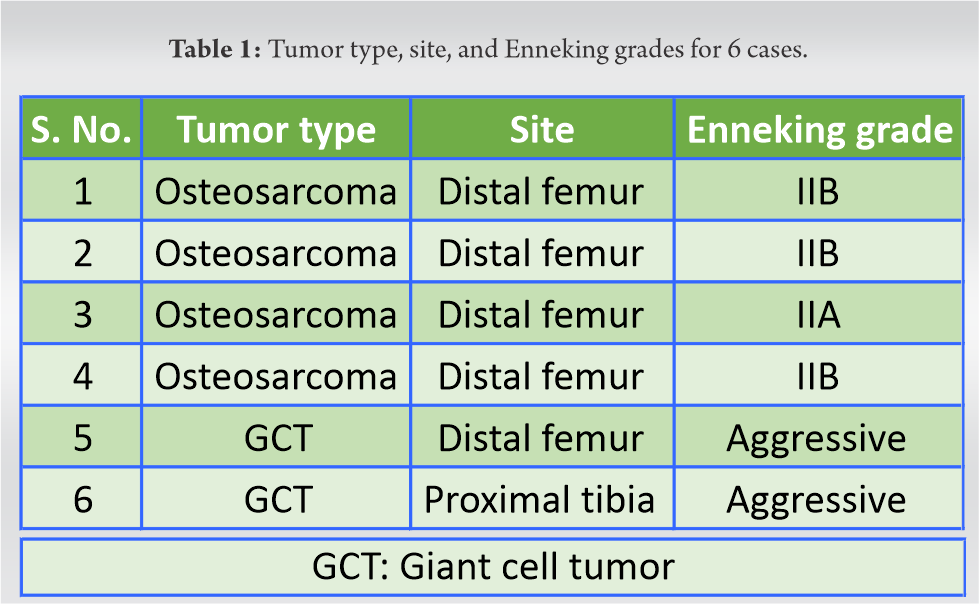 The essential utilization of neoadjuvant chemotherapy in the case of osteosarcoma has been documented [10]. Our patients with osteosarcoma received the same with the belief that it will help to eradicate micrometastases and consolidate the tumor.

GCT is accountable for 20% of benign tumor from 2nd to 4th decade of life. Treatment modalities of such tumor largely depend upon the aggressive nature and bone destruction caused by the tumor [11]. Resection of such highly aggressive tumors and reconstruction with mega prosthesis has been described to have a better outcome in many studies. Following the same logic, we operated two of our case with GCT with en bloc resection and reconstruction with a mega prosthesis. 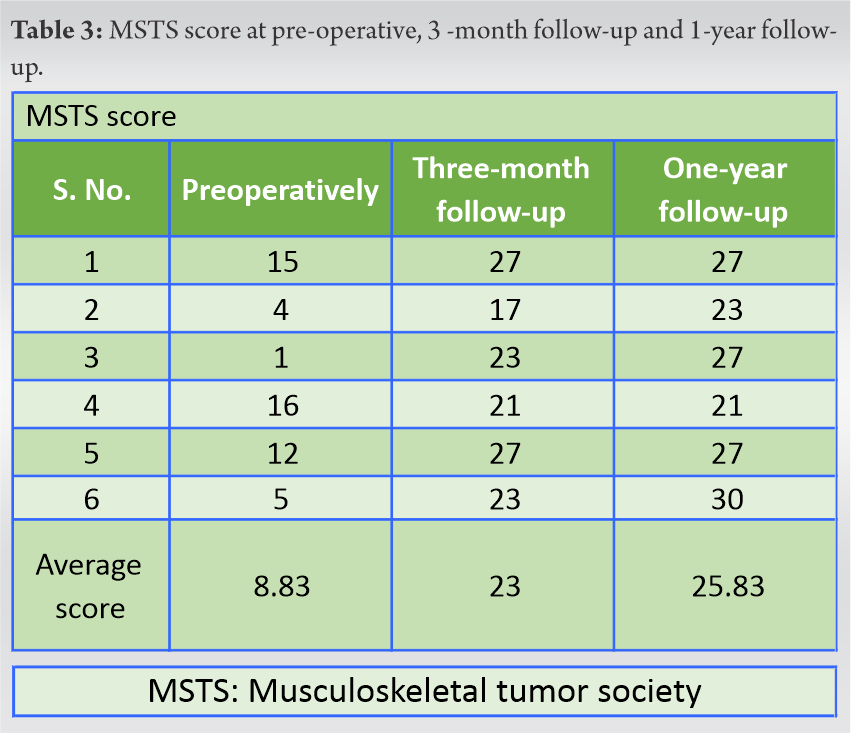 Superficial and deep infections, aseptic loosening, periprosthetic fracture, and local recurrence of the tumor are some dreaded complications that a surgeon may encounter after such heroic attempts of limb-sparing surgeries [12]. Our study had one case of superficial wound infection, which was managed by increasing parenteral antibiotics duration. We also had one case of local recurrence in a case of osteogenic sarcoma of distal femur who also developed with multiple metastasis and was treated with hip disarticulation followed by palliative care. It is irrelevant to compare complication rates from other studies as very few cases had been operated on, and longer follow-ups are still pending but the rapid return back to function even in terminal stages justifies its use.

Reconstruction with mega prosthesis is now becoming a pragmatic approach after resection of tumor around the knee. Although our study is small with only 6 cases, and short follow-ups still, the initial functional outputs on MSTS scale in our study are reciprocating results from other literature.
The hope of further improvement is still present in this field, which will be more beneficial to patients.

Tumor around knees is demoralizing for patients and early detection, en block resection under chemotherapy, and reconstruction with megaprosthesis are tools for tackling such challenges. Rapid return to function is a justifiable cause for use of megaprosthesis even in terminally ill patients. 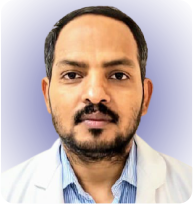 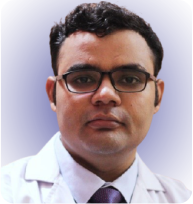 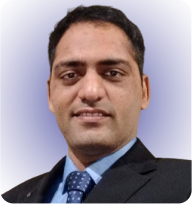 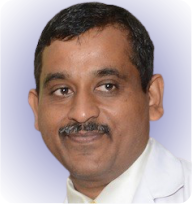 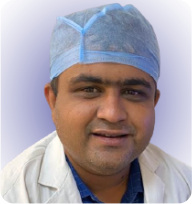 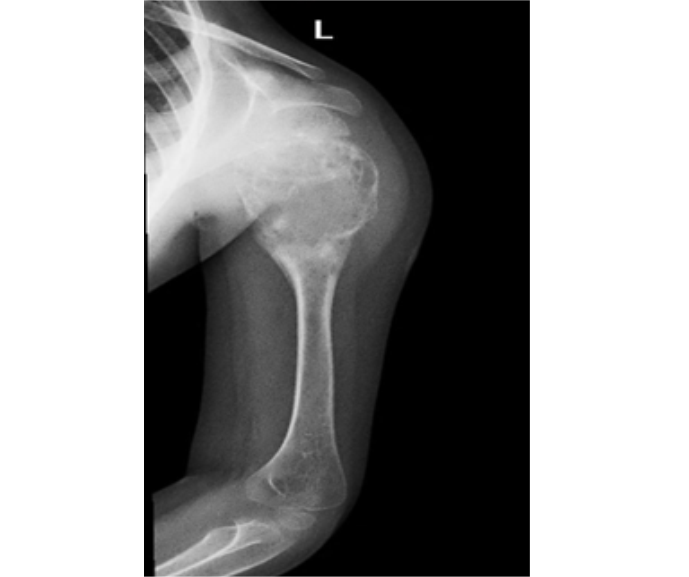 The Limb beyond Salvage: A Case Report on Two Cases of Fibroblastic Variants of Osteosarcoma...
Osteosarcoma of Jaw with Varying Histomorphologic Patterns: Case Report... 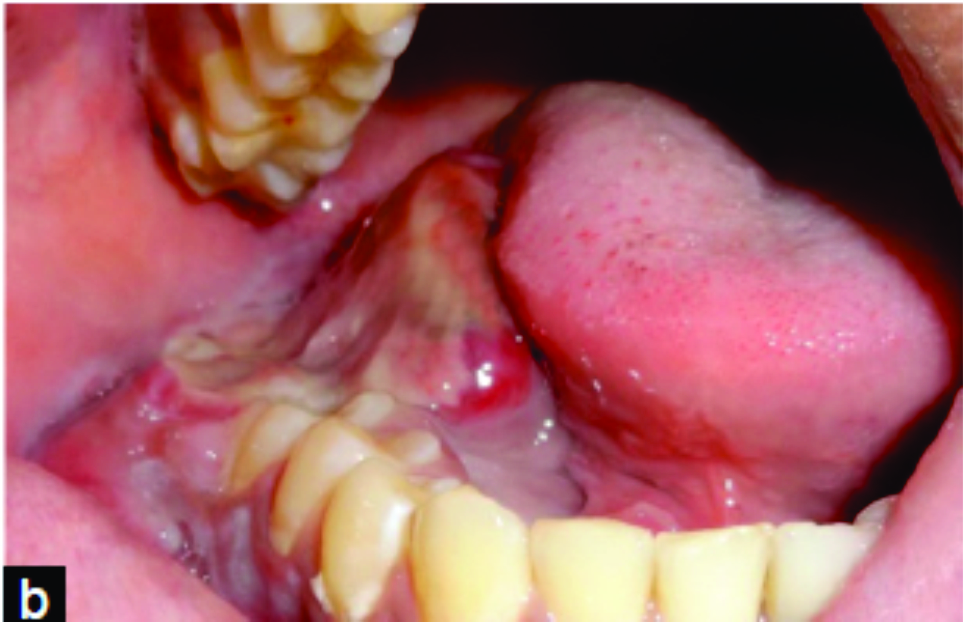 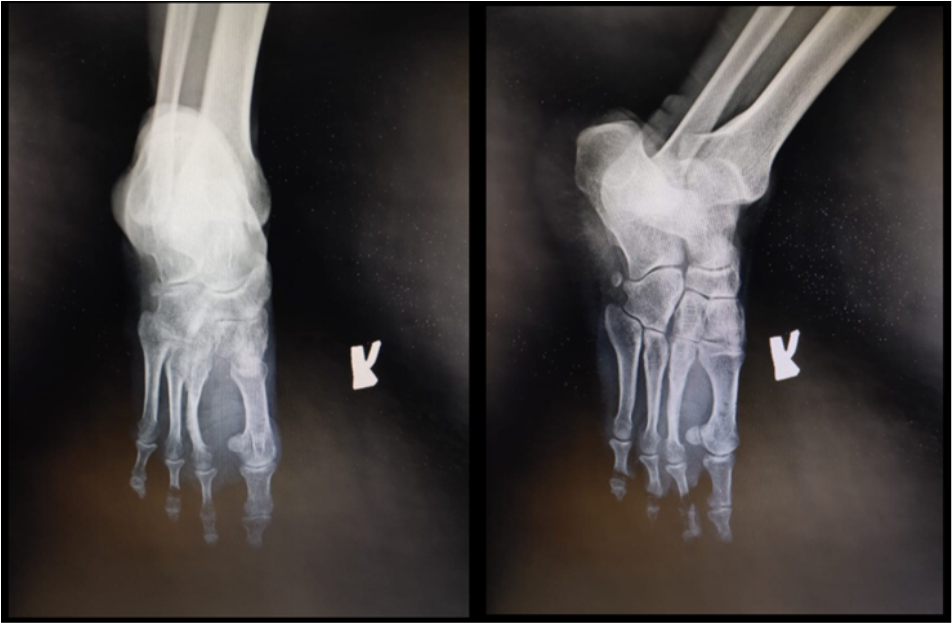