Introduction: Iliacus and psoas muscles are located in an extraperitoneal location forming the iliopsoas compartment. Iliopsoas abscess is a myositis involving this compartment. Pseudomyxoma peritonei is characterized by an abundant extracellular collection of mucin in the peritoneal cavity. When this collection is retroperitoneal, it is termed as pseudomyxoma extraperitonei. We present to you the case of a 52-year-old female with psoas abscess secondary to mucinous adenocarcinoma of the appendix, which was later diagnosed as pseudomyxoma extraperitonei.

Case Presentation: A 52-year-old female presented with pain in the right flank with discharging sinuses since one year. She had previously undergone two surgeries in the past 1 year for drainage of the abscess and had taken first line anti-tubercular treatment for around 6 months. She was managed in our institute by an open drainage of the abscess. The culture reports showed an infection with E. coli. The histopathology sections showed abundant pools of extracellular mucin with strips of columnar epithelium which indicated the pathology to be a mucinous adenocarcinoma. A contrast-enhanced computed tomography scan of the abdomen and pelvis showed a ruptured appendix mucocele and a collection in the right psoas muscle showing fistulous communication with the cecum and extending to the suture site in the right flank. Anti-tubercular treatment was stopped and an oncology opinion was taken. The patient was managed with a palliative ileostomy.

Conclusion: It is important to keep in mind diagnostic possibilities other than tuberculosis of the spine when managing a patient with an iliopsoas abscess. These include pathologies of the gastrointestinal and genitourinary tract, which need to be diagnosed and managed early.

Iliopsoas abscess is a myositis involving the iliopsoas compartment which can be primary or secondary. Primary psoas abscess is seen due to lymphatic or vascular spread and is more common in immunocompromised individuals while secondary abscess is seen due to contiguous spread [1]. Primary infection is seen in developing countries, while secondary infection is most often seen in developed countries [2]. Staphylococcus aureus is the predominant organism causing primary psoas abscess [3]. Before the advent of modern antitubercular drugs, tuberculosis of the spine was a major cause of psoas abscess. Patients present with the clinical triad of fever, limp, and back pain in just 30% [4] of cases and thus diagnosis remains a challenge. Pain can radiate to hip and thigh due to innervation of the psoas muscle by L2, L3, and L4. Malaise, nausea, and vomiting are non-specific symptoms. Direct aspiration and cultures are specific while leukocyte count and erythrocyte sedimentation rate are nonspecific for the diagnosis. Imaging modalities used for diagnosis include magnetic resonance imaging (MRI), Computed tomography (CT) scan and ultrasonography (USG). Patients can be started on empirical anti-tubercular treatment when the culture does not yield anything [1]. An active intervention in the form of percutaneous drainage (PCD) or rarely surgical drainage may be required [1]. PCD can be performed under CT guidance and is favored because it is minimally invasive. Indications of surgical drainage are failure of PCD, conditions in which PCD is contraindicated such as clotting disorders and certain conditions such as Crohn’s disease which may be a cause of secondary psoas abscess and which can be addressed during surgery done for psoas abscess [4]. Pseudomyxoma peritonei (PMP) is a condition characterized by abundant pools of extracellular mucin in the peritoneal cavity while in pseudomyxoma extraperitonei (PEP), the collection is present retroperitoneally with sparing of the intraperitoneum. The primary pathology in this case can be the appendix or the ovary.

A 52-year-old female presented with pain in the right flank with multiple discharging sinuses since 1 year (Fig. 1). She had a history of two surgeries done for draining the psoas abscess in the past 1 year. 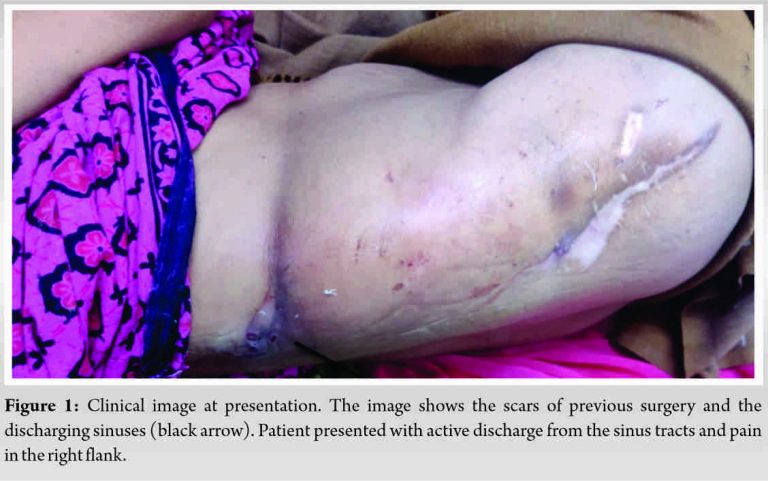 The patient had taken first-line anti-tubercular treatment (ATT) for around 6 months. Basic lab investigations revealed a raised whole blood cell count and a raised erythrocyte sedimentation rate. A radiograph of the lumbar spine showed no specific findings. MRI of the lumbar spine showed a collection measuring 10.2 × 11 × 21 cm in the right paravertebral space (Fig. 2). USG revealed a 400-500 cc unliquified and non tappable collection behind the right kidney suggestive of psoas abscess.

The abscess was drained by a posterior incision (Fig. 3). 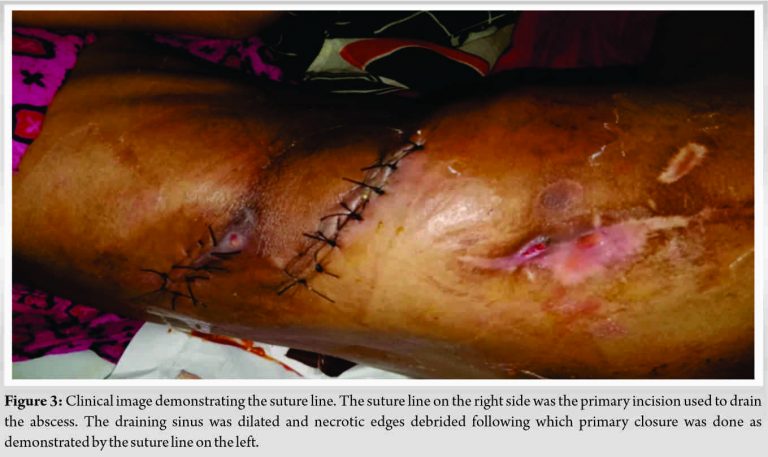 The material drained was mucinous in nature (Fig. 4) and was sent for microbiological and histopathological analysis. 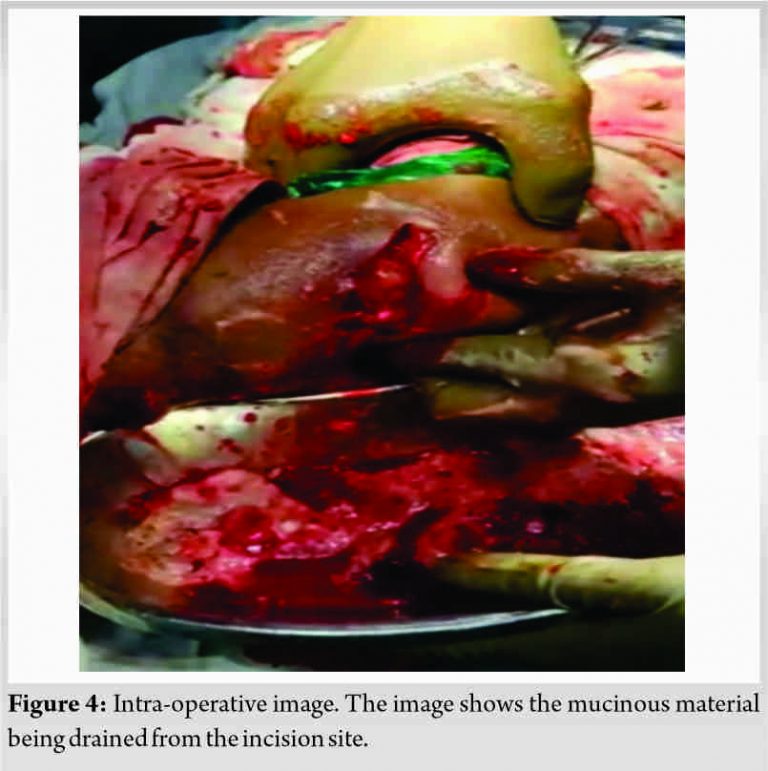 The patient was started on intravenous cefuroxime, amikacin, metronidazole, and linezolid in the postoperative period and ATT was resumed. The culture report revealed E. coli as the organism which suggested that the infection might have originated in the gastrointestinal tract. Mycobacterium tuberculosis was not detected in the intraoperative samples. Histopathology revealed abundant pools of extracellular mucin with few glands and strips of columnar epithelium with high nuclear:cytoplasmic ratio, which suggested the source to be a mucinous adenocarcinoma (Fig. 5). 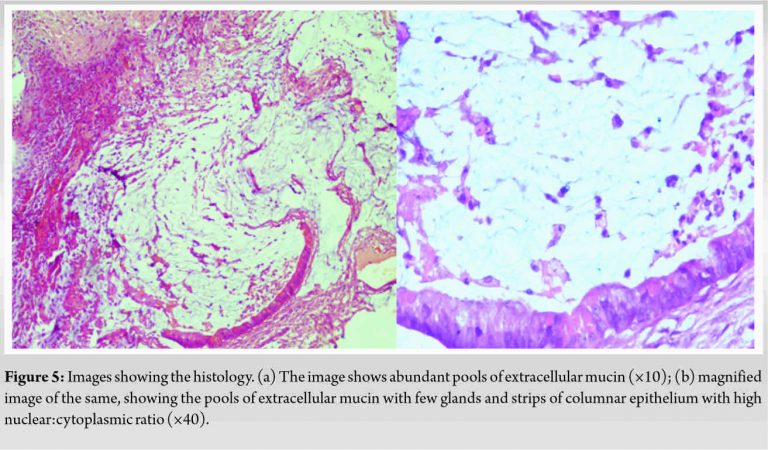 The patient developed fecal soakage from the suture site in the immediate postoperative period which was noticed incidentally. A contrast-enhanced computed tomography of the abdomen and pelvis was done which showed a thick walled collection in right psoas measuring 5 × 6.2 × 18 cm which had a fistulous communication with the base of the cecum extending to the right flank (Fig. 6). It also revealed a mucocele of the appendix which had ruptured into the right psoas muscle. Sutures were removed from the operative site and a stoma bag was connected on the site of the fistula. Colonoscopy was done by the gastrointestinal surgeons who showed a pin point fistulous opening in the cecum. ATT was stopped. The patient was managed with a palliative ileostomy done for the fistula. 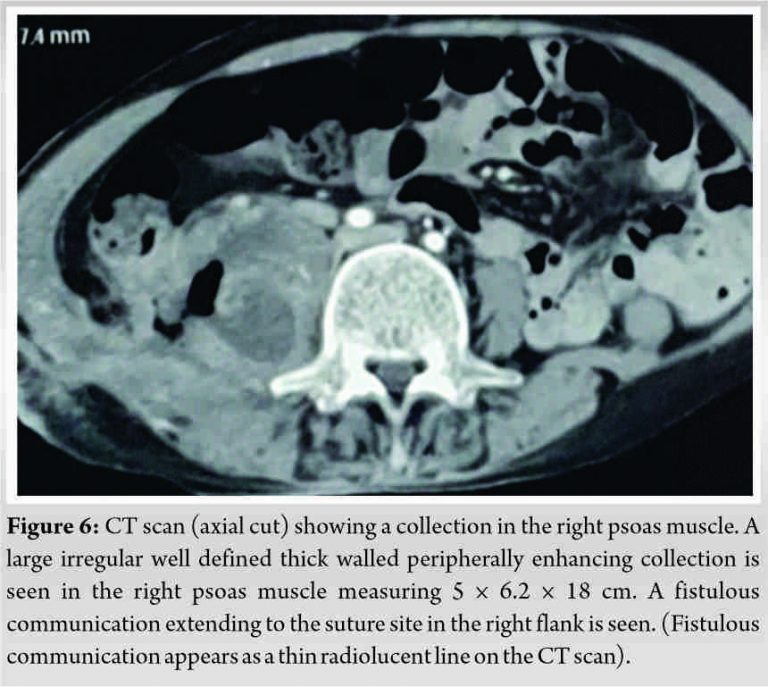 Primary iliopsoas abscess occurs as a result of hematogenous and lymphatic spread while secondary abscess is due to spread of infection from the gastrointestinal and genitourinary tract. Tuberculosis of the spine is still prevalent in India and hence an important cause of psoas abscess. Radiographs in the case of psoas abscesses are usually normal unless associated with tuberculosis of the spine. MRI provides a clear visualization of the collection, especially in the coronal cuts. The USG can also be used for quantification of the abscess. Tapping of the abscess can be done under USG guidance or PCD can be done under CT guidance. In some cases, PCD is contraindicated or the abscess may be unliquified and non-tappable and may require surgical drainage. Patients are usually started on empirical ATT after tapping or drainage has been done and the intraoperative samples have not revealed any organism. PMP is characterized by peritoneal deposits of mucinous tumors, which occurs mainly due to spread from the appendix and also rarely from the ovary. It was first described by Werth in 1884 [5]. Early described a mucocele of the appendix which was retroperitoneal in origin and contained 10 L of mucus. It had not ruptured and was managed with a complete excision [6]. PMP involving only the retroperitoneum was first described by Bonann in 1948 [7]. This was later termed as “pseudomyxoma extraperitonei” by Moran [8] and later as “pseudomyxoma retroperitonei” by Shelton et al. [9]. The origin of PME was suspected to be an appendiceal mucinous tumor, which ruptured into the retroperitoneum in most cases [10]. Tumors of the appendix are very rare. Mucinous adenocarcinomas constitute around 8% of all malignant neoplasms of the appendix [11]. Primary sites other than the appendix include mucinous neoplasm of the ovary, the uterus, bowel, urachus, common bile duct, and pancreas [10]. Around 44 cases of PME have been reported in the literature which commonly presented as an abdominal mass [11]. However, there are only a handful of cases of PME which were mismanaged initially as iliopsoas abscess secondary to tuberculosis of the spine even though the primary pathology causing the abscess was different. Hence, this scenario emphasizes the importance of diagnosing the primary pathology of psoas abscess and not subjecting the patient to inadvertent treatment. In our patient, the primary lesion involved the appendix. A CT scan can reveal the dense mucinous ascites and hence can be differentiated from normal ascites. CEA and CA 19.9 can be used as tumor markers for diagnosis as they are elevated in most cases [10]. Sugarbaker et al. managed PME by radical surgery supplemented by chemotherapy, which was given intraperitoneally and systemically [12]. Post surgery, patients can be monitored with CT scan to look for the deposits at regular intervals and with tumor markers CEA and CA 19.9. PME has a better prognosis than PMP as the vital abdominal structures are not involved [12]. Kumar et al. reported a case of a 45-year-old male who presented with right-sided abdominal lump and distension and was diagnosed radiologically as a case of psoas abscess. Histopathological examination of the intraoperative jelly like material which was removed from the retroperitoneum revealed features suggestive of mucinous adenocarcinoma, diagnosing the condition as PEP [13]. Chamisa et al. reported the case of a 48-year-old female who presented with PEP mimicking a psoas abscess for which retroperitoneal exploration and biopsy was done. She presented again with disseminated PEP which was managed with debulking surgery [10]. Mehmood et al. reported the case of a 55-year-old female who was initially managed with anti-tuberculous therapy for psoas abscess. Open drainage of the abscess revealed the presence of gelatinous material. An exploratory laparotomy revealed a firm gritty appendiceal lesion invading the psoas muscle with metastatic deposits in the omentum and the right ovary. Histopathology revealed metastatic adenocarcinoma of appendix with involvement of ovary and omentum [14]. Hasan et al. reported the case of a 55-year-old female, in which a large retroperitoneal pseudomyxoma presented as a non-healing cutaneous sinus in right supragluteal region, masquerading as a iliopsoas abscess [15].

We have presented a case of mucinous adenocarcinoma of the appendix which led to a mucocele of the appendix. This mucocele ruptured into the psoas muscle and presented as a psoas abscess. Since other diagnostic possibilities were not excluded, the patient was initially managed as a case of psoas abscess secondary to tuberculosis of the spine. Thus, a high index of suspicion is necessary during the management of psoas abscess. It is always advisable to send the material obtained from tapping or draining the abscess for histopathological diagnosis as it can give us a clue to the primary pathology. Even though tuberculosis of the spine is a leading cause of psoas abscess in India, other possible sources of infection should be kept in mind, especially the gastrointestinal tract. Early diagnosis and management of conditions causing a secondary psoas abscess is essential as it will reduce the morbidity and mortality associated with this condition.

This case report underlines the importance of diagnosing the primary pathology causing a psoas abscess which is essential to achieve a cure. It is necessary to search for all possible causes of psoas abscess and not manage all cases like an abscess secondary to tuberculosis of the spine. 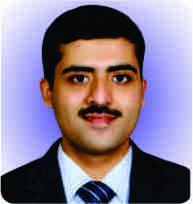 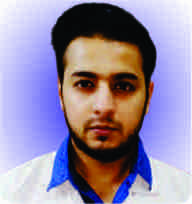 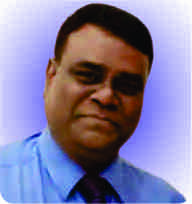 Dr. R C S Khandelwal
How to Cite This Article: Prabhu RM, Koshire SR, Khandelwal RCS. A Rare Case of Psoas Abscess Secondary to Mucinous Adenocarcinoma of the Appendix: A Case Report Journal of Orthopaedic Case Reports 2021 August; (08): 1-5
Dear Reader, We are very excited about New Features in JOCR. Please do let us know what you think by Clicking on the Sliding “Feedback Form” button on the <<< left of the page or sending a mail to us at editor.jocr@gmail.com
RELATED POSTS
Magnet Fracture within a Magnetically Controlled Growing Rod: A Case Report of a New Mechanism of Fa... 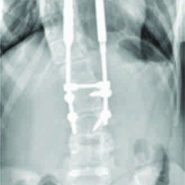 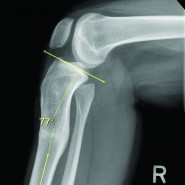 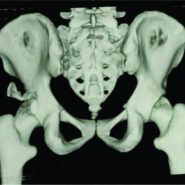 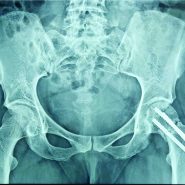