Introduction: Chronic global pelvic instability can be due to many different etiologies with infection being an uncommon cause. We present a case of chronic global pelvis instability secondary to osteomyelitis involving both the anterior and posterior ring, a rare and challenging problem with no standard treatment.

Case Presentation:A 57-year-old female with a history of intravenous drug use presented with global pelvis instability in the setting of pubic symphysis and posterior sacroiliac osteomyelitis with multiple-associated abscesses. She was managed with serial surgical debridement’s X4 and combined anterior and posterior fixation/fusion, with resolution of her infection and instability.

Chronic pelvis instability is associated with pelvic and low back or buttock pain, often leading to high rates of disability. Common causes of chronic pelvic instability include pregnancy and parturition, late sequela of trauma, osteitis pubis, rheumatologic disorders, tumor, and prior urologic or gynecologic procedures [1]. In rare cases, longstanding infection can destabilize the pelvic girdle. At present, a standard treatment approach for chronic pelvis instability due to infection does not exist. We present a case of a 57-year-old female with chronic anterior and posterior pelvic osteomyelitis with multiple abscesses that were successfully treated with serial anterior surgical debridement and eventual fusion with a fibular strut allograft in conjunction with a posterior lumbosacropelvic fusion.

A 57-year-old female with medical history of intravenous drug use, hepatitis C, and chronic obstructive pulmonary disease was transferred to our institution with a chief complaint of sepsis, longstanding pelvic pain, and a sensation of pelvic instability with attempted weight bearing. These symptoms worsened in the several days before presentation and were now associated with chills. She had undergone several prior debridements of groin and psoas abscesses, with the most recent debridement performed 4 months previously at outside institutions.
Computerized tomography (CT) scans at presentation demonstrated a 12-cm cranial to caudal abscess involving the pubic symphysis and surrounding pectineus musculature, with severe erosion of the symphysis consistent with osteomyelitis. There was superior extension of the abscess into the pelvic cavity anterior and adjacent to the bladder and concern for erosion of the abscess into the bladder wall. In addition, an abscess measuring 6 × 2 × 3 cm was visualized involving the left sacroiliac joint and surrounding iliacus muscle, with erosive changes of the joint. A magnetic resonance imaging (MRI) scan of the pelvis confirmed these findings, and an MRI of the lumbar spine demonstrated spondylolisthesis and severe central spinal canal stenosis at L3-4, and an autofusion and mild canal stenosis at L4-5. In addition, single-leg standing views revealed severe pubic symphysis vertical instability (Fig. 1).
A left distal femoral traction pin was placed for temporary pain relief and stability. An aspiration of the anterior suprapubic abscess performed by interventional radiology grew Methicillin-sensitive Staphylococcus aureus; therefore, treatment with IV nafcillin was begun. The patient’s surgical management consisted of serial debridements X4. Given the patient’s severe anterior bone loss, definitive fixation required a fibular strut allograft in combination with rigid pelvic reconstruction plate fixation. The patient’s posterior pelvic instability could not be addressed with sacroiliac screw fixation because safe osseous fixation pathways for screw placement could not be identified on advanced imaging [2]. Our spine surgery service was consulted, and it was decided that the patient’s sacroiliac instability could be addressed with S2-alar-iliac (S2AI) lumbosacropelvic fixation and fusion [3].
For the first procedure, the patient was positioned supine and a Foley catheter was placed. A left ilioinguinal approach was utilized. While working in the lateral window, gross purulence was encountered on entering the pelvic brim due to abscesses around the iliacus and psoas muscles. The left sacroiliac joint was aggressively debrided and all infected, necrotic bone was excised. Next, the pelvis was explored through the middle window and infected tissue was debrided along the pelvic brim; however, no gross purulence was detected. The pelvis was explored through the medial window by splitting the rectus and an infectious rind was identified around the bladder. While attempting to open the space of Retzius using blunt-finger dissection, the Foley balloon was felt and visualized. The abscess had eroded into the bladder; the bladder was also scarred onto the posterior aspect of the pubic symphysis. The urology service was consulted intraoperatively to assist with mobilization of the bladder off the posterior symphysis and close the bladder defect after partially excising additional infected fibrous rind.
The pubic symphysis bone was noted to be necrotic. Aggressive surgical debridement was performed to healthy and bleeding bone. An extensive amount of infectious material and gross purulence was also noted and debrided from the intrapelvic space and the entire wound was copiously irrigated with 12 l of normal saline. An antibiotic cement delivery device was placed into the anterior pubic symphysis space along with deep and superficial hemovac drains and the wound was closed (Fig. 2).
Three more extensive anterior debridements were performed over the next 2 weeks; during each procedure, the antibiotic cement delivery devices were exchanged along with the drains. Following the fourth debridement, a pelvic external fixator was applied with supra-acetabular pins to provisionally reduce and stabilize the pelvis. A burr was used to create a trough in the ends of the remaining symphysis and pubic rami and a fibular strut allograft was measured and cut to fit into place. The allograft was stabilized with a 3.5-mm eight-hole superior plate and a 3.5-mm six-hole anterior plate, and the external fixator was removed. Intra-operative fluoroscopy and post-operative CT scan confirmed the adequacy of the symphysis reduction and plate fixation (Fig. 2).
Three days after anterior pelvic fixation, the patient returned to the operating room, where our spine service removed her femoral traction pin and performed a posterior L3-S2 S2AI fusion with pedicle screw instrumentation and cancellous allograft in combination with demineralized bone matrix (Fig. 2). Postoperatively, she was permitted to weight-bear as tolerated on her right lower extremity for transfers only, but remained touchdown weight-bearing on her left lower extremity. Her IV antibiotic was switched to cefazolin once sensitivities were established; she continued IV antibiotics for 12 weeks, with plans for lifelong suppressive oral antibiotics. She was discharged from the hospital shortly thereafter. 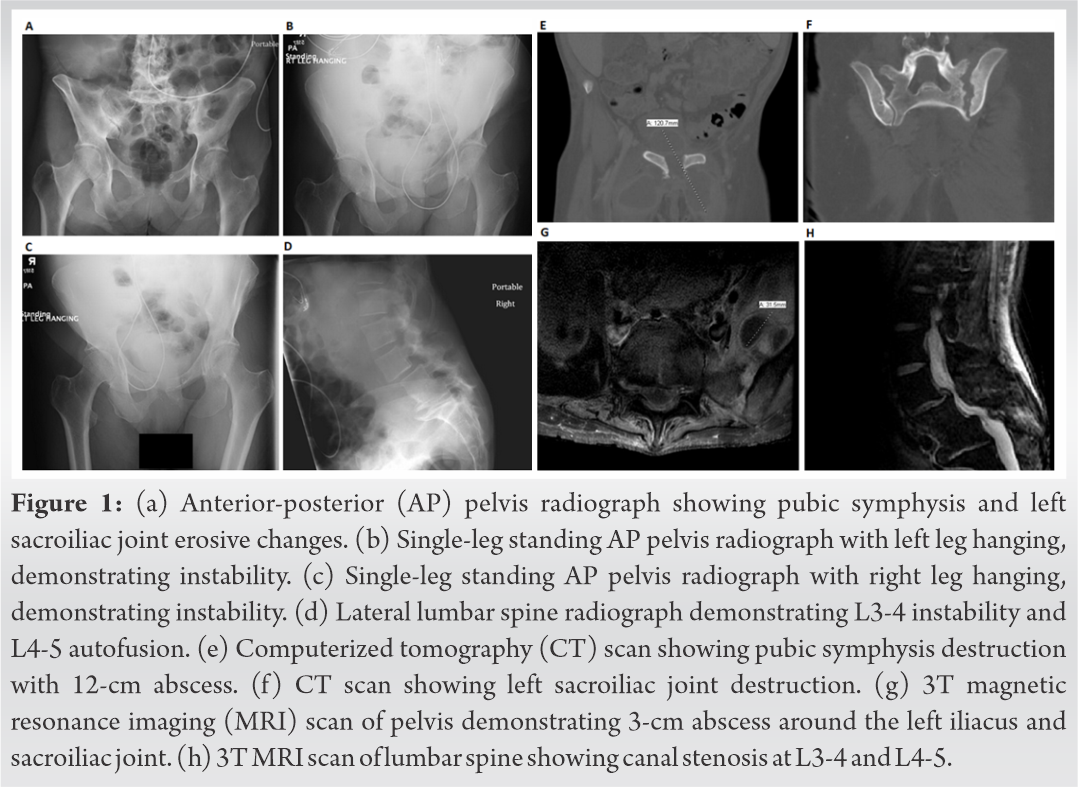 At 6 weeks, the patient reported that her feelings of pelvic instability were gone, and at 3 months, she reported minimal pain and no pelvic instability and was permitted to weight-bear as tolerated on both lower extremities. A CT scan showed fusion of the anterior symphysis at 4 months postoperatively. At 12 months, she had no pelvic pain or instability and had unassisted ambulation. She had no long-term sequela from her bladder erosion and she has been taken off hospice care for chronic obstructive pulmonary disease and pelvic pain. Radiographs showed stable fixation and anterior pelvic fusion (Fig. 3).

Chronic pelvic instability is an uncommon, debilitating condition, with pain localizing to the pelvic, suprapubic, inner thigh, or posterior back or buttocks regions [1]. Combined anterior and posterior instability requires disruption of the pubic symphysis in addition to the posterior sacroiliac ligamentous complex, including the anterior and posterior sacroiliac ligaments [2]. Longstanding infection is a rare cause of chronic pelvis instability. Pyogenic sacroiliitis is a previously described phenomenon comprising 1–2% of cases of osteomyelitis or septic arthritis [3]. Its treatments include targeted antibiotics, surgical debridement, and surgical arthrodesis [4].
Pubic symphysis septic arthritis may be even more uncommon. Of 738 cases of septic arthritis from six large series, none involved the pubic symphysis [5, 6, 7, 8, 9, 10]. Ross and Hu reviewed 100 cases of pubic symphysis septic arthritis reported in the literature and found that only four cases had associated sacroiliac joint infection [11]. While surgical debridement was performed in 55 of these cases, there were no reports of surgical fixation, unlike our case. Fifteen of these patients, as with our patient, had a history of intravenous drug use, and it is unclear if any of these cases were associated with gross pelvic instability.
Kanakaris et al. reported a single case of sacroiliac osteomyelitis with secondary anterior symphysis instability [12]. They performed six surgical debridements of the sacroiliac joint, with placement of antibiotic cement spacers before final fixation with posterior sacroiliac screws and anterior pubic symphysis fusion with dual plating and tricortical iliac crest autograft and bone morphogenetic protein-7. The patient was ambulating freely with no aids at 13 months postoperatively. Unlike our case, infection here was isolated to the posterior pelvis and the anterior symphysis instability developed secondarily.
We describe the first reported case of surgical management, including fixation, of chronic gross pelvic instability secondary to both anterior symphysis and posterior sacroiliac osteomyelitis. Our surgical management plan had several basic goals. First, extensive debridement of all infected and necrotic tissue, along with appropriate antibiotic treatment, would be required. Given the severity and chronicity of infection, we decided to perform serial debridements X4 with antibiotic cement spacer placement and exchanges. An ilioinguinal approach provided the best access to both intrapelvic space and the iliac wing. Second, a stabilization method that addressed the symphysis bone defect in addition to stabilizing the anterior and posterior ring was required. The size of the symphysis defect necessitated an allograft fibular strut, in combination with dual symphysis 3.5-mm plating for additional stability. A safe osseous fixation pathway for sacroiliac screw fixation could not be identified, and after consulting our spine service, it was determined that the patient would benefit from lumbosacropelvic fixation that would also address her lumbar spine instability in lieu of sacroiliac screws. Her activity was progressively advanced and she achieved a stable fusion that allowed her to return to unrestricted ambulation. 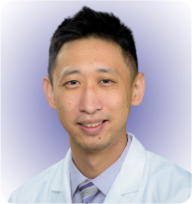 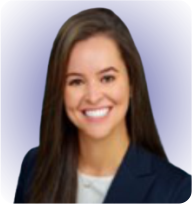 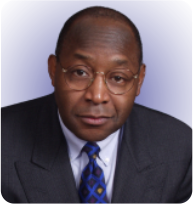 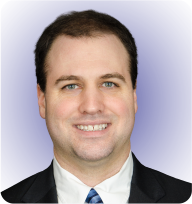 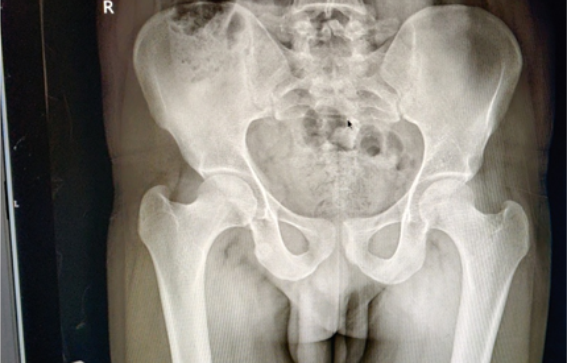