Fibrocartilaginous Dysplasia – A Report of Five Cases with Review of Literature

Case Report:We report five cases of fibrocartilaginous dysplasia with varying degrees of cartilaginous differentiation. The age of the patients ranged from 7 to 30 years, and there was a female predominance (M:F ratio of 1:4). The proximal femur was the site of involvement in all the cases. Imaging showed well demarcated radiolucent lesions with stippled calcifications. Histologically, cartilaginous areas were noted juxtaposed to typical areas of fibrous dysplasia. Four of the patients were treated with curettage and one with a marginal resection. None of the five cases had recurrences at the past follow-up.

Conclusion:FCD is a rare variant of fibrous dysplasia which needs to diagnosed and treated early, as there is a high risk of pathological fracture.

Fibrous dysplasia is a benign fibro-osseous lesion of the bone that occurs due to a dysplastic process involving the bone forming mesenchyme. They can be either monostotic or polyostotic and have a predilection for long bones (especially the femur), craniofacial bones, and ribs [1]. There is a wide morphologic spectrum including the infrequent presence of cartilage. Fibrocartilaginous dysplasia is an extreme end of the spectrum of FD with marked cartilaginous overgrowth. Radiological and histopathological findings in some cases, especially if only the cartilaginous component is sampled at biopsy may be mistaken for cartilaginous neoplasms causing a diagnostic dilemma [2, 3, 4].
We report five cases of fibrocartilaginous dysplasia with clinical, radiological, and pathological features and review the literature of this interesting entity.

This study included five cases of fibrous dysplasia with varying degrees of cartilaginous differentiation reported at Apollo Hospitals, Chennai. Archived Hematoxylin and Eosin stained sections of these cases were reviewed and fresh sections recut where necessary. The clinical findings of these cases were obtained from the patients’ medical records; and radiological images were available and were reviewed. This study was approved by ethics committee (institutional review board). Four of the cases were children and one was an adult (age range: 8–30 years). There were four females and one male. The presenting symptoms were pain, swelling, or pathological fracture. The duration of symptoms was variable from few weeks to few years. Imaging revealed monostotic, well demarcated, expansile and lytic lesions with cortical thinning, and involving the neck of femur in all the cases. A classical Shepherds’ crook deformity was noted in all the cases. Fracture associated changes were noted in three cases and there was no soft tissue extension in any. Specs of calcification were noted in all the cases in variable proportions. The radiological impression was fibrous dysplasia in two cases and enchondroma in three. Curettage was done on four cases and an en bloc resection was performed in one patient. The radiograph and the image of the gross specimen of the patient with the marginal resection are shown in (Fig. 1). 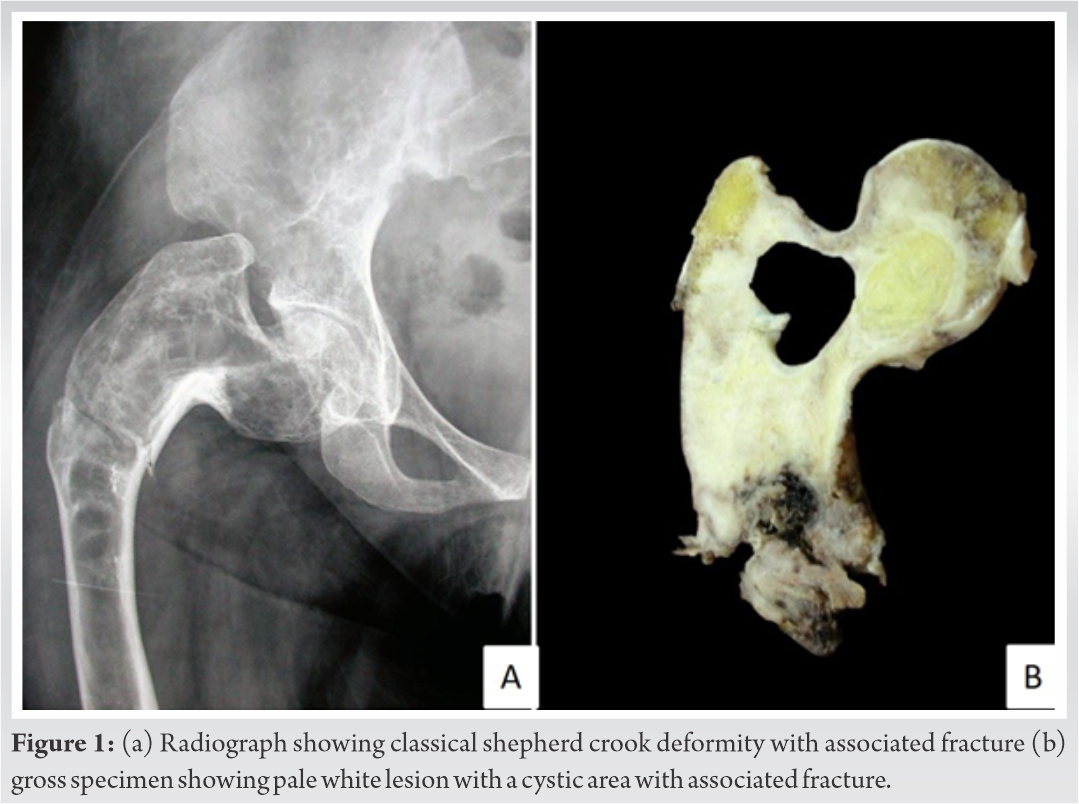 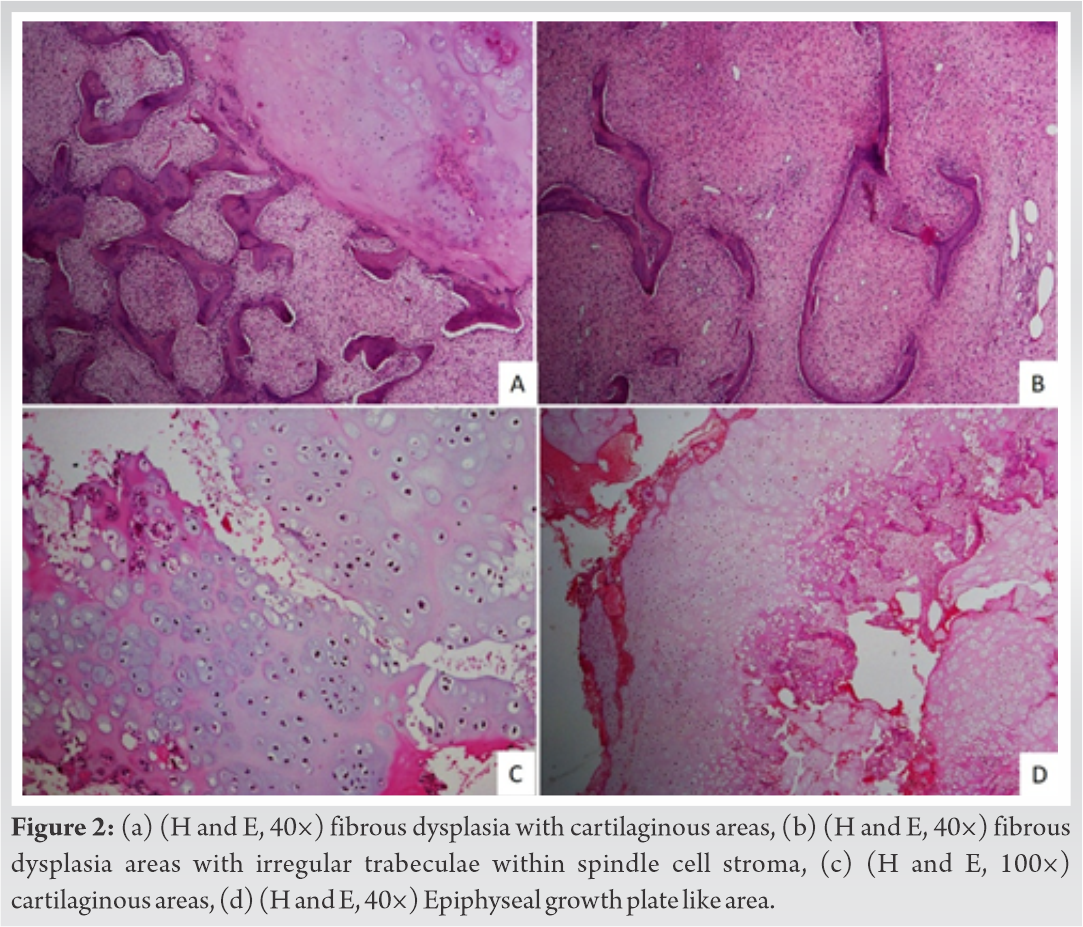 Fibrous dysplasia may rarely exhibit cartilaginous differentiation, which may range from rare microscopic focus to grossly or radiologically evident large areas. The percentage of the cartilaginous component varies and no cutoff has been proposed as to when these should be termed FCD rather than FD. Florid fibrocartilaginous dysplasia is the extreme end of spectrum of FD with cartilaginous differentiation. Radiological and histopathological findings in such cases may mimic cartilaginous neoplasms, causing a diagnostic dilemma [2, 3, 4]. Fibro chondrodysplasia was the term proposed by Pelzmann et al. for these cases of fibrous dysplasia with prominent cartilaginous component [5]. The term has been replaced and is now called fibrocartilaginous dysplasia. Kyriakos et al. in their review article state that FCD may occur at any age ranging from 3 to 66 years with a mean of 18.3 years. There is slight male preponderance as compared to FD, where there is no gender predilection. They have been reported in both polyostotic and monostotic cases. Some studies have reported its frequent occurrence in monostotic cases and others in polyostotic cases. The femur is the most common location that has been reported. FCD often presents with pain, a mass, or deformities of the limb [2]. There are many hypotheses regarding the origin of the cartilaginous islands. Sankerin et al. proposed that they arise from the developmental rests at the epiphyseal growth plate [4]. This concept is supported by the fact that these cartilaginous nodules often show peripheral enchondral ossification with osteoblastic rimming, unlike the adjacent metaplastic bone of fibrous dysplasia. Areas resembling epiphyseal growth plates are often noted. They suggested that these grow simultaneously with fibrous dysplasia, rather than being part of the lesion itself. This hypothesis is further supported by a study done by Scherer et al., who found incidental cartilage in the femur in 20 of 1125 autopsies [6]. However, this does not explain the origin of FCD in calvarial and vertebral bones where there are no growth plates. In the femoral neck region, the trochanteric growth plate may also be the origin of these cartilaginous areas [7]. Lichtenstein and Jaffe proposed that the cartilaginous areas are an integral part of the dysplastic process and arise by stromal metaplasia [8]. Some authors believe that the cartilaginous nodules arise from displaced cartilage from prior fracture site callus [9]. Radiologically, fibrous dysplasia is usually a well-defined expansile lesion involving the medullary cavity, often with cortical thinning. The density of the tumor varies depending on the relative proportions of fibrous, cartilaginous, and osseous tissue. Soft-tissue extension is not seen. In long standing cases, the bone is markedly expanded causing extreme bowing and angulation, resulting in a classical shepherd crook’s deformity [10]. While FCDs resemble fibrous dysplasia radiologically, the associated cartilaginous foci have dot like, ring like (annular), or floccular calcifications. If the cartilaginous component is extensive, a cartilaginous neoplasm may be mimicked radiologically [2]. Histologically, there is an admixture of typical areas of fibrous dysplasia and hyaline cartilaginous nodules. The cartilaginous areas are often well delineated with peripheral calcification and enchondral ossification and demonstrate scattered chondrocytes lacking atypia with rare binucleation [2]. Occasionally foci resembling epiphyseal growth plates are observed. Molecular studies have shown that fibrous dysplasia is caused by postzygotic missense mutations of GNAS1 gene [11] and is now being incorporated in the diagnostic workup of fibro-osseous lesions. However, its significance in FCD has not been well studied, there being a single case report of FCD with GNAS mutations [12]. These lesions may mimic various cartilaginous neoplasms radiologically and histologically. The main differentials that are considered are enchondroma, low grade chondrosarcoma, dedifferentiated chondrosarcoma, and fibrocartilaginous mesenchymoma. Enchondroma is a consideration especially in small biopsies where FD areas are not sampled. However, the presence of epiphyseal growth plate like areas with enchondral ossification should raise a suspicion of FCD. FCD may rarely show binucleated chondrocytes, thereby raising concern for a low-grade chondrosarcoma. Lack of atypia with absence of a soft-tissue component may help in separating the two entities. Rarely the spindle cell areas next to cartilaginous nodules may mimic a dedifferentiated chondrosarcoma. However, absence of high-grade cellular areas with marked nuclear pleomorphism will exclude dedifferentiated chondrosarcoma. The main differential diagnosis is fibrocartilaginous mesenchymoma which shows significant overlap with FCD clinically, histologically, and radiologically. This is a benign tumor with locally aggressive behavior. Radiologically, they resemble FCD except for some cases showing soft-tissue extension. Histologically, they show cartilaginous nodules within a spindle celled stroma and the cartilaginous areas are similar to FCD with enchondral ossification. Unlike FCDs, however, the stroma is compact and hypercellular with elongated hyperchromatic spindle cells. They may even show mild nuclear atypia [13]. Finally, FCDs should not be confused with focal fibrocartilaginous dysplasia which is a dysplastic process of long bones causing angular deformity in children. It has been suggested that there is failure in mesenchymal differentiation at the region of pes anserinus, resulting in excessive fibrocartilage, which interferes with local bone growth [14].
FCD with abundant cartilage can lead to extreme deformity with attendant significant therapeutic problems. Early treatment is required, as they often predispose the bone for pathological fracture. Treatment is similar to that of FD, often surgical with curettage and bone grafting or osteotomy with internal fixation. Rarely en bloc resection can be done for cases with extreme deformities [2, 3, 4, 7]. Malignancy arising from fibrous dysplasia has been rarely reported, especially osteosarcoma and fibrosarcoma [15]. However, review of literature suggests a benign course of FCD with no reported recurrences or malignancies. Kyriakos et al. in their review article suggested that since cartilage has been in reported in fibrous dysplasia in varying amounts in many cases, fibrocartilaginous dysplasia probably represents the extreme end of cartilaginous differentiation in FD, rather than a distinct entity [2].

FCD is a rare variant of fibrous dysplasia and its distinction from other benign or malignant cartilaginous neoplasms is important. The location and radiology coupled with the biphasic histology enables the alert observer to recognize this entity in curetting’s; though in a needle or small biopsies the presence of only the cartilaginous component could create diagnostic difficulties. Awareness of the entity and radiological correlation helps prevent misdiagnosis.

These five cases are being reported to create greater awareness among pathologists of a rare variant of a common disorder. The histopathological differentiation from other cartilaginous neoplasms is crucial as the treatment is often conservative surgical intervention. 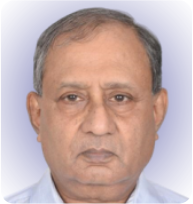 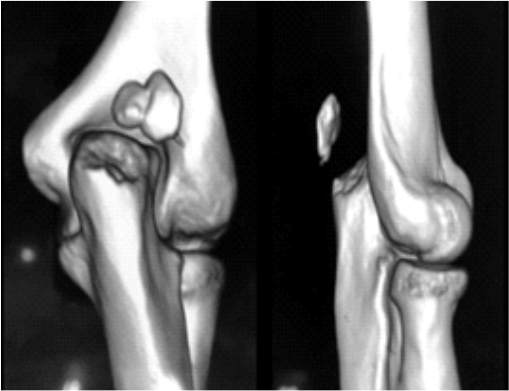 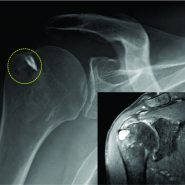 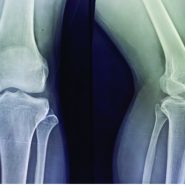