Giant Cell Tumor of the Second Metatarsal Managed with Ray Amputation: A Rare Case Report and Review of Literature

Case Report: A 38-year-old male presented to the hospital with a firm swelling over the 2nd metatarsal slowly progressing over a period of 4 months, initial screening radiological investigations included X-rays, X-rays showed a tumorous growth involving the shaft of the 2nd metatarsal of the right foot, and the X-rays showed a characteristic soap bubble appearance. Magnetic resonance imaging. On gross assessment, the intraoperative sample showed that the GCTB has a dark brown-to-reddish appearance that is friable in texture. The gold standard for diagnosing a GCT is based on biopsy histopathological findings. The key histomorphologic feature is multinucleated giant cells.

Conclusion: Giant cell tumors are frequently locally aggressive with high recurrence percentage, hence, excision was done. Nowadays, early radiological screening techniques help early detection of such rare occurrence of tumors such as the GCT and appropriate management. In conclusion, the giant cell tumor of the bone is a unique presentation of stromal cell and hematopoietic interaction in the bone.

A 38-year-old male presented to the hospital with a firm swelling over the 2nd metatarsal slowly progressing over a period of 4 months, during the time of presentation, the patient complained of pain while walking. On examination, the swelling was firm and hard, with deformity present over foot, there was no distal neurovascular deficit (Fig. 1). Blood investigations were within normal limits and infection markers were not raised. Initial screening radiological investigations included X-rays. It showed a tumorous growth involving the shaft of the 2nd metatarsal of the right foot, with a characteristic soap bubble appearance (Fig. 2). Magnetic resonance imaging (MRI) imaging and computerized tomographic (CT) scan done and excision of tumor planned with ray’s amputation of the 2nd metatarsal. MRI is a fairly non-specific modality of treatment, in this case, it was primarily done to assess preoperatively the surrounding soft tissue for better pre-operative planning of the excision. 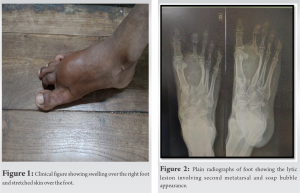 A straight 8 cm incision centered over the second metatarsal taken and tumor dissection done to separate it from the surrounding soft tissue and tumor with involved metatarsal excised. The 1st and the 3rd metatarsal bone were held in approximation with the use of Ethibond sutures and tightened to reduce the gap between the bones created a result of the void after removal of the tumor tissue. This was done as a precautionary measure as giant cell tumors of the bone have a high incidence of recurrence at the same site after excision curettage. On gross assessment, the intraoperative sample showed that the GCTB has a dark brown-to-reddish appearance that is friable in texture. The gold standard for diagnosing a GCT is based on biopsy histopathological findings. The key histomorphologic feature is multinucleated giant cells (Figs. 3 and 4).

Postoperatively, below-knee slab was given for support and continued for 2 weeks later partial weight-bearing started with boot Walker after suture removal. Six monthly chest radiograph and CT scan were done to detect any metastatic involvement but no any local or systemic involvement was found at 1 year. At follow-up of 1 year, the patient is doing all the daily activities without any difficulty and has normal range of motion. Moreover, radiograph does not show any signs of recurrence (Figs. 5 and 6).

On X-ray, GCTs are lytic/lucent lesions that have an epiphyseal location and grow to the articular surface of the involved bone. Most common sites, distal femur and proximal tibia, represent the common locations for giant cell tumors [5]. The giant cell tumors can show numerous patterns and presentations ranging from small contained lesions with a hard solid soft-tissue involvement to locally aggressive tumors with significant bone loss, cortical loss, pathological fractures, and compression pressure changed affecting the local soft tissue [4, 6]. MRI as an imaging modality to assess the giant cell tumors of bone is very non-specific, the tumors often display reduced imaging in the T1-weighted figures and increased in T2-weighted imaging. Sometimes, gadolinium scan is of particular value to detect the hemosiderin deposition which is frequently found in the giant cell tumors of the bone [7]. On scintigraphic feature of this tumor, shows the “donut sign” which is high intensity radionuclear uptake in the peripheral tissue as a result of hyperemia and photopenia and necrosis in the center of the tumor, however, this is not a finding specific to this tumor. Some surgeon advice in doing a full body PET scan to look for secondary metastasis. The most common presenting symptom of a GCT is pain, these symptoms may vary in accordance to the location of the tumor, the joint involved and the resultant limitations in the range of motion. Patients may even present with pathological fractures when the cortex becomes thing as a result of the lytic bone activity in the weight-bearing bone and radiologically shows areas of ill-defined bone loss. Campanacci et al. described radiographic classification in 1987 which continues to be referenced in clinical practice [8]. This classification system differentiates lesions based on their amount of bone destruction. Grade 1 tumors have well-marginated (geographic), defined borders (the least common presentation) and a subsequent report has indicated that local recurrence in these lesions is lower than those without the sclerosis. Grade 2 lesions have a poorly defined tumor borders but remained contained within the bone (this category is subdivided into 2-A lesions without fractures and 2-B lesions with a pathological fracture) and Grade 3 lesions being non-geographic with associated cortical destruction and soft-tissue extension. The majority of the GCTB lesion fit into the latter two grades. The Campanacci system appears to be helpful when utilized clinically to help determine treatment options. Excision (curettage) is the most common surgical treatment aimed at removing the tumor (intralesional resection), while preserving as much as bone as possible. Complete tumor removal is the most important aspect of this treatment and should be done through an adequate cortical window that allows visualization of the entire defect. This case the metatarsal is a rare location, the best plan was to perform a Ray’s amputation of the 2nd toe. Prashant et al. reported metatarsal GCT case which was managed with excision and reconstruction using fibula autograft with good outcome; they had lesion involving first metatarsal, fibular graft was taken and was inserted into the troughs created in medial cuneiform and proximal phalanx and fixed with K-wire, both proximally and distally [9]. Minhas et al. studied data of 25 years and found 240 cases of giant cell tumor, out of which only seven were affecting the metatarsals. Four GCTs in the 1st metatarsal and one in the 2nd metatarsal were in Stage 3 and were treated by en bloc resection and reconstruction with free fibular graft. Fibular graft was held with intramedullary K-wire. Rest of the tumors in all metatarsals were Stage 2 and were treated by curettage and autologous cancellous bone grafting. At 1 year follow-up, there was no recurrence [10].

Metatarsal giant cell tumors are very rare and less data available on management. They have high recurrence percentage, hence, excision was done which gave good clinical outcome and there was no local recurrence of the tumor. 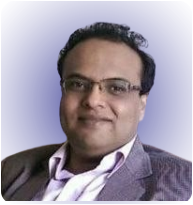 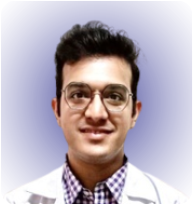 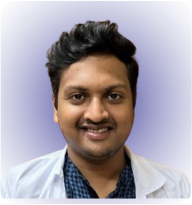 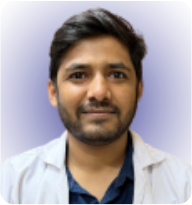 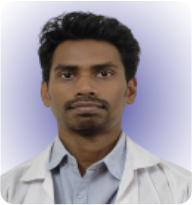 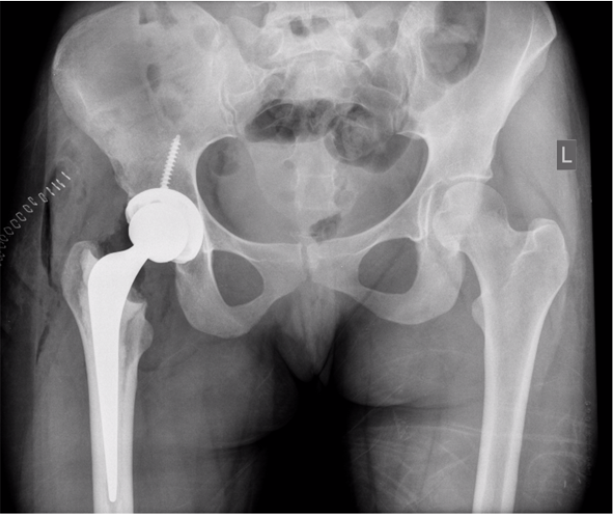 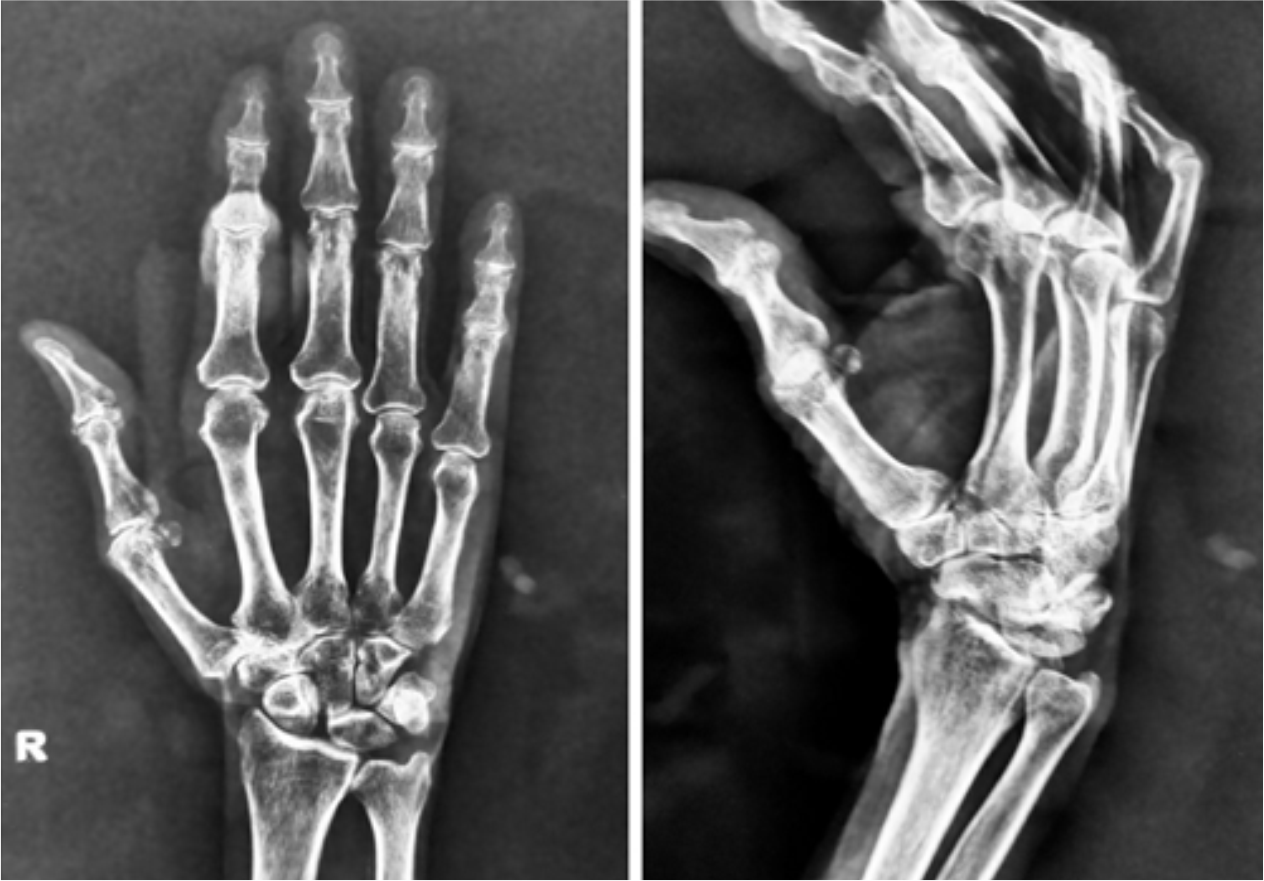 Arthroscopic Removal of Tenosynovial Giant-Cell Tumors of the Cruciate Ligaments. Presentation of Tw...