Introduction:Ochrobactrum anthropi is an opportunistic and rare human pathogen, which is seen widely in the environment. O. anthropi infections have been reported in both immunocompetent and immunocompromised individuals. There is no proper consensus on the diagnosis and management of O. anthropi related infections.

Case Report:We report a case of O. anthropi related left shoulder pyomyositis with distal clavicular and acromion osteomyelitis in an immunocompetent individual with an elaborative diagnostic and treatment algorithm for its effective management.

Conclusion:A comprehensive management strategy with a combination of implant removal (if present) with extensive surgical debridement of bone and soft tissue and intravenous antibiotics results in successful eradication of O. anthropi infection.

Ochrobactrum anthropi is a Gram-negative and non-fermentative rare human pathogen, ubiquitously seen in the environment [1, 2]. Being an opportunistic bacterium, it is noted for bacteremia, localized infections, and catheter or stent-associated infections in both immunocompetent and immunocompromised individuals [3, 4, 5]. Reports have been made on its diagnostic challenges and difficulty in identifying the optimal therapeutic algorithm [6, 7, 8, 9]. Till date, there are no standard guidelines to diagnose and treat O. anthropi related infections [10, 11, 12]. We report a case of pyomyositis of the left shoulder with distal clavicular and acromion osteomyelitis due to O. anthropi and discuss our diagnostic and treatment algorithm for its effective management.

A 37-year-old male presented to the outpatient department with a history of fever, pain, and restriction of movements over the left shoulder, and generalized body pain for 20 days duration. Fever was high grade, intermittent with chills and rigor. The left shoulder pain was insidious in onset, gradually progressive, non-radiating, aggravated on left shoulder movements, without any relieving factors. On examination, the left shoulder was warm and tender with severe restriction of movements especially abduction and external rotation. Complete blood count showed leukocytosis with raised erythrocyte sedimentation rate and C-reactive protein levels. The inflammatory markers such as IL-1, IL-6, and procalcitonin were also raised. The blood culture was sent.
A plain radiograph of the left shoulder revealed no abnormality. The patient was started empirically on intravenous cefuroxime twice daily but he continued to have a persistent high-grade fever. MRI of left shoulder demonstrated ill-defined diffuse edema with peripheral enhancing collection involving all the rotator cuff muscles and marrow edema with a patchy enhancement of distal end of clavicle and acromion suggestive of osteomyelitis with pyomyositis and abscess (Fig. 1, 2).

Under general anesthesia, the pus was drained out and sent for culture and Gene Xpert MTB/RIF. The debrided tissue was also sent for biopsy which turned out to be pyomyositis. Blood and pus culture demonstrated O. anthropi showing susceptibility to cotrimoxazole, imipenem, meropenem, piperacillin-tazobactam, and resistance to aminoglycosides, cephalosporins, and fluoroquinolones. Gene Xpert was negative. The patient was started intravenous meropenem 1 gm thrice daily for 2 weeks followed by tablet co-trimoxazole (160 mg/800 mg) twice daily for 4 weeks. The patient was also supplemented with oral risedronate 35 mg once weekly for 12 weeks, oral calcium 500 mg once daily for 12 weeks, and Vit D3 60k IU once weekly for 12 weeks. The patient was motivated for an active range of shoulder movements and shoulder physiotherapy. The patient had an uneventful recovery and followed up for 12 months.

In 1988, Holmes et al. described the genus Ochrobactrum and its subtype species O. anthropi [13]. O. anthropi is recognized as belonging to the new genus Ochrobactrum, which was also called Brucella anthropi and Achromobacter that occasionally causes human infection [14]. The genus Ochrobactrum was named after the Greek word “Ochros” meaning yellow color [2]. The species name anthropi was given after being recovered from contaminated biologic products, hospital environments, intravascular cannulas, indwelling catheters, and clinical specimens such as blood, urine, feces, pus, CSF, wounds, bile, throat, and vagina [15, 16]. O. anthropi is an opportunistic, low virulent aerobic, non-fermentative, motile, oxidase-positive, indole-negative, gram-negative mesophilic bacillus as shown in (Fig. 3) [10]. API 20NE automated system misidentify O. anthropi as Brucella species because of its close relation [8, 14]. Hence, a confirmation is required with negative serum Brucella species antibodies in a patient with severe infections caused by O. anthropi bacteremia without any proper primary focus of infection and refractory to standard treatment [3].
O. anthropi is the name given to the urease-positive Achromobacter species previously designated as per CDC Vd-1, Vd-2 as Achromobacter spp. Biotypes 1 and 2 and Achromobacter Groups A, C, and D [10]. Ochrobactrum species are closely related to Brucella species with Ochrobactrum intermedium occupying a phylogenetic position that is intermediate between O. anthropi and Brucella [10, 17, 18]. They are oxidase-positive, saccharolytic, and motile with peritrichous flagella [10]. O. anthropi is ubiquitous and widely distributed in soil, plants, and water sources like normal saline, antiseptics, dialysis fluids, and swimming pools and also has been isolated from the hospital environment and contaminated foreign bodies such as intravascular catheters, graft tissues, and clinical specimens [19, 20, 21].
For O. anthropi, good growth is observed on routine media in 24 h. Colonies are about 1mm in diameter and appear circular, low convex, smooth, shining, and entire as shown in (Fig. 4) [22]. Isolates of O. anthropi have shown growth readily on MacConkey agar which appears mucoid consistency and are non-lactose fermenters as shown in (Fig. 4) [23]. Key tests useful in distinguishing O. anthropi from related organisms include their ability to hydrolyze urea, inability to hydrolyze esculin, and a negative ONPG test [2]. There are no biochemical tests currently available that separate O. intrermedium from O. anthropi [24]; however, it has been suggested that colistin (polymyxin E) and polymyxin B susceptibility can be used to O. intermedium is resistant and O. anthropi is sensitive [25].
In 1980, Appelbaum and Campbell described the first human clinical case with O. anthropi in a pancreatic abscess [26]. Infrequently, the clinical isolates of O. anthropi have been reported in humans secondary to nosocomial infections and hosts with immune dysregulation [27]. The risk factors for O. anthropi clinical disease spectrum are immune dysregulation, prolonged antibiotic therapy, allograft implantation, preceding trauma, and indwelling medical devices [20, 25]. Literature evidence demonstrates that O. anthropi is an emerging microbe with increased frequency in causing musculoskeletal infections either through direct inoculation from the environment or through hematogenous dissemination [16, 28, 29, 30].
Alnor et al. explained the biofilm formation with O. anthropi due to its capability to adhere to foreign bodies (i.e., silicon tubes) [23]. A few studies have shown the presence of O. anthropi in clinical specimens of intravascular cannulas and catheters [27, 31], biliary drainage tubes [32], chest tubes [32], and contaminated dural graft [33]. Till date, two reports were mentioned without any risk factor for O. anthropi infection in the musculoskeletal system in the literature and the present case is the third such case [19, 28]. In the musculoskeletal system, O. anthropi causes osteomyelitis, septic arthritis, osteochondritis, and soft tissue abscess [3, 4, 5, 6, 12, 13, 14, 15]. The review of O. anthropi infection in the musculoskeletal system is tabulated in (Table 1). 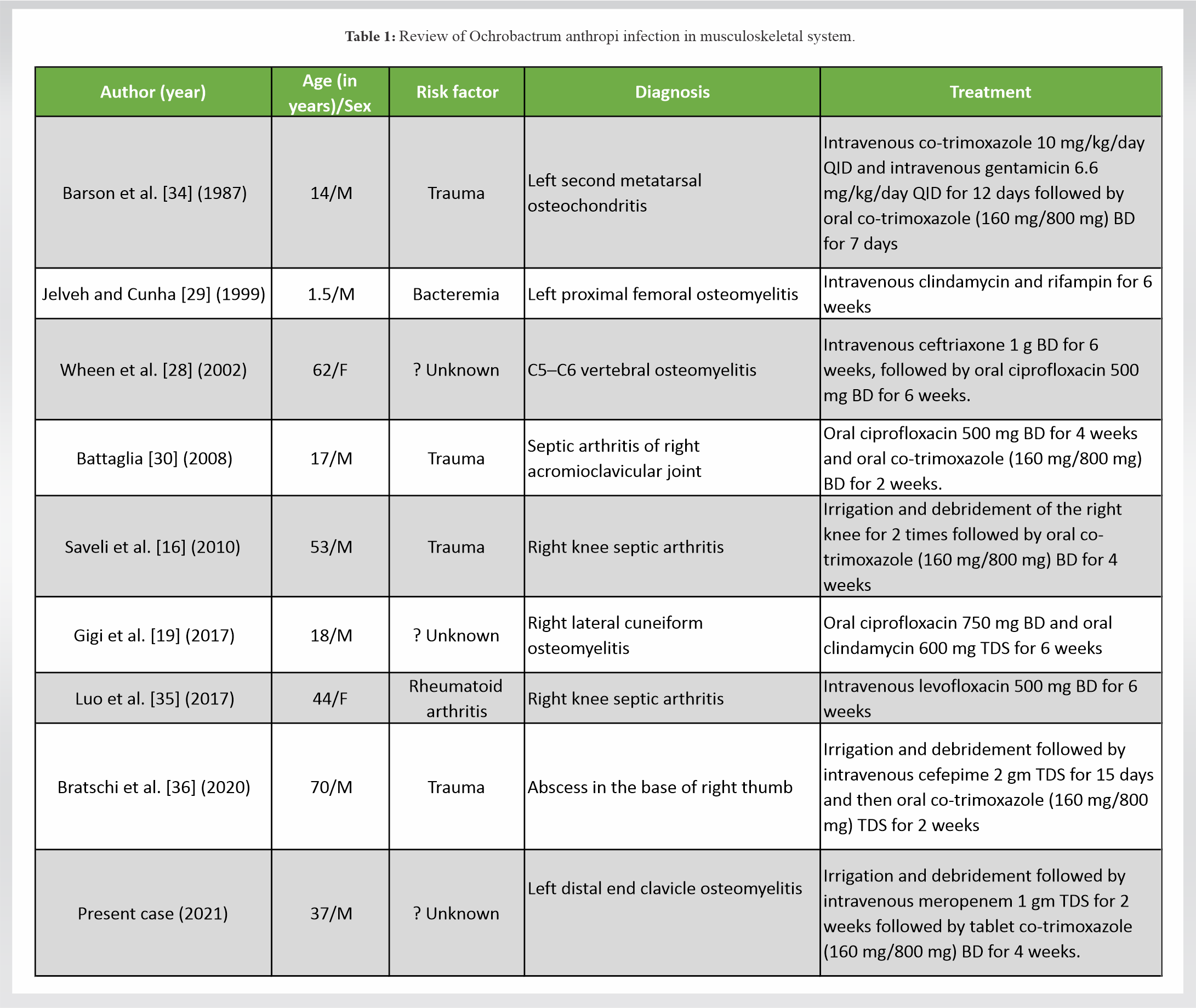 Types of specimen: Blood, wound swab, aspiration fluids, urine, nasal and nasopharyngeal swab, aural swab, CSF, stool, and central line catheter for culture.
Specimen processing: All samples must be processed as early as possible within 30 min to 1 h to avoid contamination.
Direct detection and cultures: The clinical samples are processed for culture and direct Gram stain which are visualized as slender, short to long gram-negative bacilli. Specimen suspected for O. anthropi can be cultured in 5% sheep blood agar, chocolate, and MacConkey agar. This organism also grows well in the broth of blood culture systems like brain heart infusion, nutrient broth, and thioglycolate broth. Colonies are small about 1mm in diameter and appear circular, low convex, smooth, shining, and entire resembling Enterobacteriaceae. Isolates of O. anthropi show mucoid appearance on MacConkey agar and are non-lactose fermenters whereas the Brucella group of organisms shows no growth in MacConkey agar [6, 8].
A few reports have been published in the literature stating the misidentification of Brucella group of organisms due to low homology with O. anthropi [8, 14, 37, 38]. Gopalsamy et al. reported misidentification of O. anthropi in Brucellosis infection as both the organisms are close phylogenetic relatives which result in cross-reactivity on Western blot and 16s ribosomal RNA sequence signatures [8]. Due to the overlap between two groups of organisms, the diagnosis becomes a great challenge. The American Society of Microbiology recommends that Brucella can be identified by growth patterns whereas O. anthropi can be identified by automated culture systems such as VITEK-2 and MALDI-TOF assay [39, 40].
Literature evidence for the management of O. anthropi is very limited. Though O. anthropi is a biofilm producer, it is difficult to eradicate the infection rather than the radical tissue debridement. There was no consensus available in terms of mono- or dual- or combination treatment modality for the eradication of O. anthropi infections. O. anthropi is resistant to penicillins and cephalosporins but usually susceptible to imipenem as it is consistent with inducible AmpC β-lactamase expression. The treatment should follow antibiotic susceptibility testing. Teyssier et al. demonstrated in vitro antibiotic susceptibility testing of 21 strains of O. anthropi which are susceptible to aminoglycosides, fluoroquinolones, netilmicin, colistin, and co-trimoxazole [41] but clinical failures were observed with ciprofloxacin [4] and imipenem [42] despite in vitro susceptibility. Yu et al. stated that monotherapy with an aminoglycoside or appropriate β-lactam antibiotics yielded a good clinical response in O. anthropi bacteremia [43]. The combination of implant removal (vascular catheters, dural grafts) with extensive surgical debridement of bone and soft tissue and intravenous antibiotics has to be given for the successful eradication of O. anthropi infections.

O. anthropi is an emerging pathogen with an increase in the frequency of musculoskeletal infections. This review provides a bird-eye view of the low virulent, opportunistic and nosocomial microbe in both immunocompetent and immunocompromised individuals and helps in reaching a diagnosis and providing appropriate management to curb the infection.

Vigilant monitoring and culturing of the infective specimen help in the diagnosis of O. anthropi. A comprehensive management strategy with a combination of implant removal (if present) with extensive surgical debridement of bone and soft tissue and intravenous antibiotics results in successful eradication of O. anthropi infection. 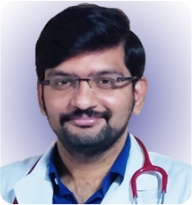 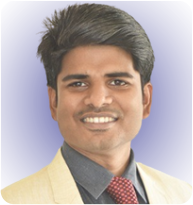 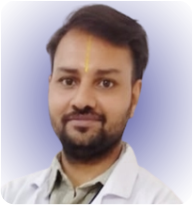 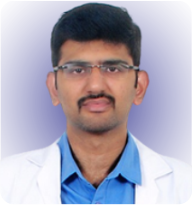 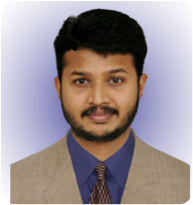 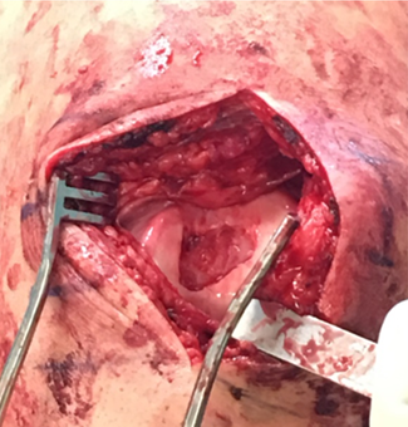 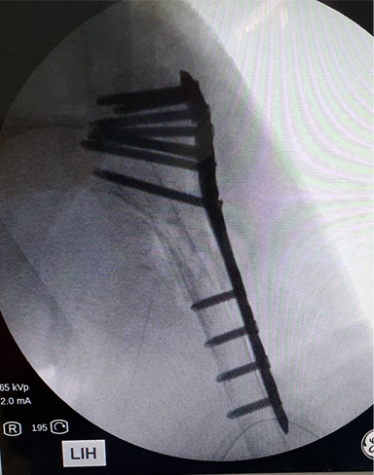 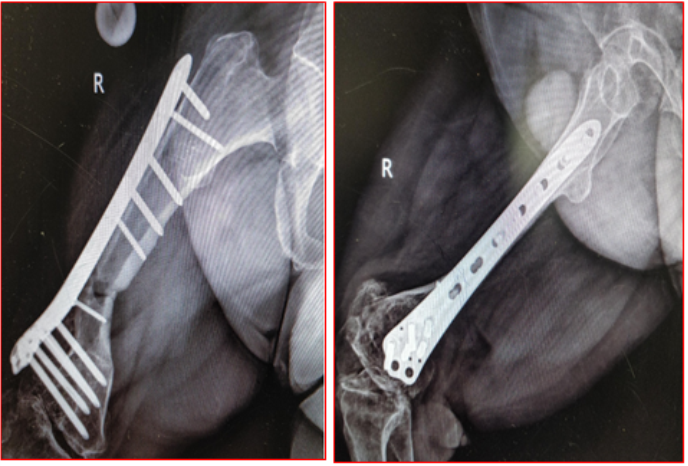 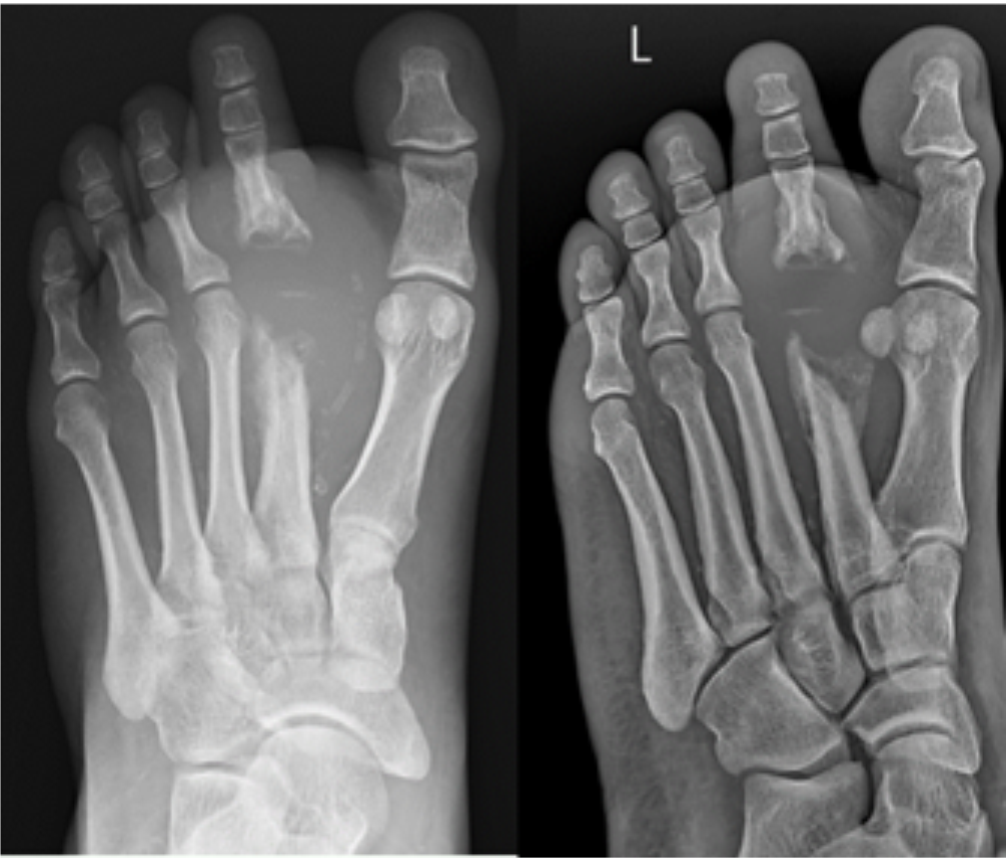