Osteochondroma can be seen in any bone which is usually removed because of cosmetic reasons. It should be removed completely after skeletal maturity to prevent recurrence.

Introduction: Osteochondroma are benign neoplasms which arise from small cartilage nodules within the periosteum. They can be either pedunculated or sessile and are more common in the extremities. They rarely develop in bones like scapula, feet, hands and pelvis. Management of the lesion is by en-bloc excision.
Case Report: We present a case of 18 year female, who came with a swelling in right groin since 2 years which was diagnosed to be osteochondroma on x-ray and magnetic resonance imaging. Excision biopsy was done as the patient wanted it to be removed for cosmetic purpose and confirmed it to be non-malignant osteochondroma. There has been no recurrence even after 1 year of follow up.
Conclusion: Thus osteochondroma of the pelvis should be kept in mind as a differential diagnosis when evaluating mass in pelvis. Also these have to be removed when they pose cosmetic problems.
Keywords: Osteochondroma, exostosis, pubic ramus, pelvis, excision, benign osteochondroma, pubic ramus osteochondroma.

Osteochondroma are benign neoplasms which arise from small cartilage nodules within the periosteum. They can be either pedunculated or sessile and are more common in the extremities, i.e. distal femur, proximal tibia and proximal humerus in decreasing order. They can be multiple and be a part of multiple hereditary exostosis. They rarely develop in bones like scapula, feet, hands and pelvis. Management of the lesion is by en-bloc excision. Indications for excision are cosmetic deformity, pressure symptoms on neuro-vascular bundle or malignant transformation to chondrosarcoma which is rare. [1] Pelvic osteochondroma has been documented with an incidence of 5% of all osteochondromas. [2] Osteochondroma of the pubic ramus is rare entity and the actual incidence is not known. It can present as a solitary lesion or as a part of multiple hereditary exostosis. Excision of such a pelvic lesion is required only if there are pressure symptoms. Pelvic osteochondromas can present as compressive neuropathy or compressive symptoms on urethra, bladder or other vital structures and so on. On the contrary a pubic bone mass may need to be removed in young females which might be prominent at labia for cosmetic reasons as in our case.

Case report
An 18 year female came to the out-patient department with complaints of swelling in right groin since 5 years which was insidious in onset, small in size initially but grew over last 5 years and was noticeable to the patient. Patient came for medical help for cosmetic reasons. On examination, there was a bony hard swelling 3 x 5 cms in size in the groin at the pubic tubercle of the right side. It was fixed to the underlying bone. The skin over the swelling was free and mobile. Patient did not have any other swellings elsewhere in the body. Plain x-ray’s of pelvis AP, inlet and outlet view (Fig.1 to 3)

and magnetic resonance imaging (Fig 4 & 5) showed bony growth of 54x37x46 mm in size in transverse, craniocaudal and anteroposterior dimension which was arising from right superior pubic ramus and was extrapelvic in situation with a cartilage cap of 4mm. There was no involvement of any neurovascular bundle. Any involvement of urinary tract was also ruled out by micturating cysto-urethrography. Patient was taken up for excision biopsy. Extended ilio-inguinal approach (Fig. 6) was taken and as the soft tissue was retracted cartilage cap of the osteochondroma was seen (Fig. 7). It was excised with osteotome piece meal (Fig. 8).

On table manual palpation was done and one more piece was found which was then excised (Fig. 9). Inguinal ligament was closed in layers maintaining the external iliac ring with continuous sutures to prevent future inguinal hernia (Fig. 10). Cosmetic closure of skin was done. Histopathology confirmed it to be benign osteochondroma without any undifferentiated cells. Since then there has been no recurrence even after one year follow up.

Discussion
Osteochondromas are benign tumors which have an unknown etiology. It is considered as a developmental physeal abnormality rather than a primary bone neoplasm. A few theories have been suggested which include Virchow theory, Muller theory, Keith theory, and a few more. [3] The most common sites are metaphysis of long bones like distal femur, proximal tibia and proximal humerus. They are also found at other sites but it is uncommon. Osteochondromas can also be found as a part of multiple hereditary exostosis which is thought to be associated with EXT1 and EXT 2 gene. [4] Trauma and inflammation have been suggested as a contributory factors. Osteochondromas are as such an incidental finding in patients and only a few are symptomatic. It is usually present in growing age and the growth of the mass stops after skeletal maturity. Most common symptom is cosmetic deformity or pain. It can cause compression of the surrounding neurovascular structures which then warrants its removal. There can also be malignant transformation to chondrosarcoma which is rare. Various studies have mentioned about the size of cartilage cap as a predictor for malignancy with a cartilage cap of more than 2 cm after skeletal maturity indicative of malignant transformation [5,6,7,8,9]. Pre operative investigations and planning in patients presenting with a bony neoplasm must be done. It is helpful in distinguishing between benign and malignant tumors. Radiographic and ancillary imaging studies should be sought in advance of surgical intervention. Gitelis et al [10] established a diagnostic strategy for evaluation and differentiation of tumors. Pre-operative X-rays and MRI were done for our patient to see the extent and measure the cartilage cap of the osteochondroma. Pelvic osteochondroma involving ilium has been reported in literature which caused nerve root compression and had to be removed. [11] Similar cases of iliac bone osteochondroma have been reported by Kumar S et al [12]. Osteochondroma of the pubic symphisis has been reported which was removed due to bladder outlet obstruction. [13] Thus with a thorough search in literature we concluded that it is a rare entity and it was diagnosed due to the compressive symptoms caused by it. Here in our case the swelling near the private part was the cause for the patient to seek medical help. There were no compressive symptoms either on vessels or on urinary tract which was confirmed by arterial Doppler and micturating cysto-urethrography. A similar case was reported by Qaisrani GH [14] and associates which was also present on superior pubic ramus and was removed for cosmetic deformity. Complete En-Bloc removal of the mass was done in our case for cosmetic reasons and she is being followed up regularly. Even after 1 year there has not been any recurrence of the lesion.

Conclusion
Benign osteochondromas are usually incidental findings and are removed most commonly for cosmetic purposes with a very low incidence of recurrence if removed after skeletal maturity. They can also present with compressive symptoms which warrants its removal. Also pelvic osteochondromas are rare entity but it has to be kept in mind for any bony mass when looking for differentials.

Pelvic osteochondromas are rare entity but it has to be kept in mind for any bony mass when looking for differentials. 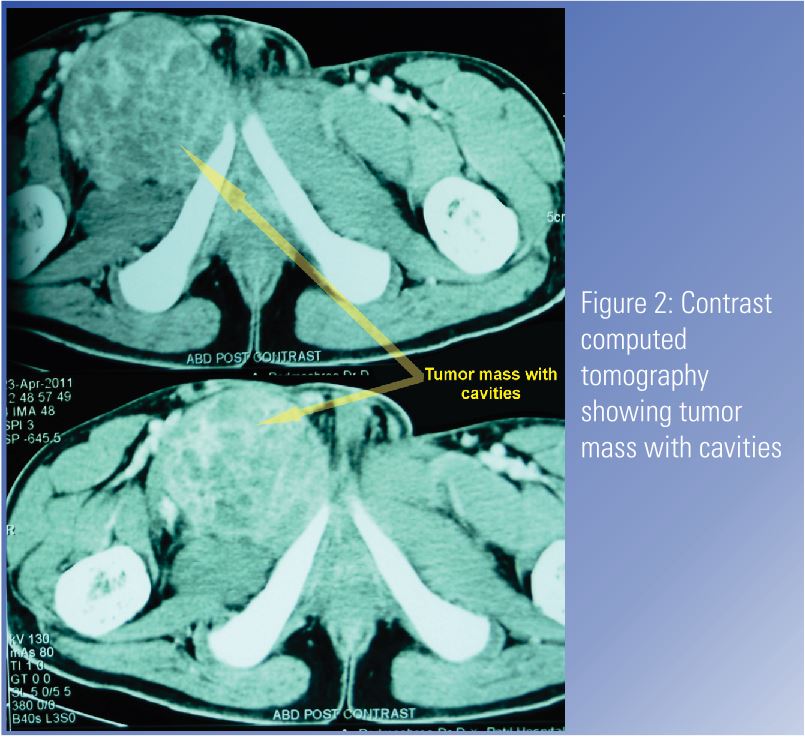 Secondary Chondrosarcoma Arising from the Proximal Fibula Presenting as Sciatica... 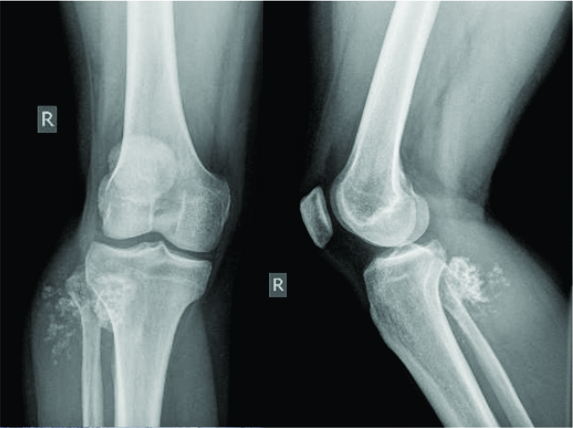 Arthroscopic Anterior Cruciate Ligament Reconstruction in a Case of Multiple Osteochondromatosis: A ... 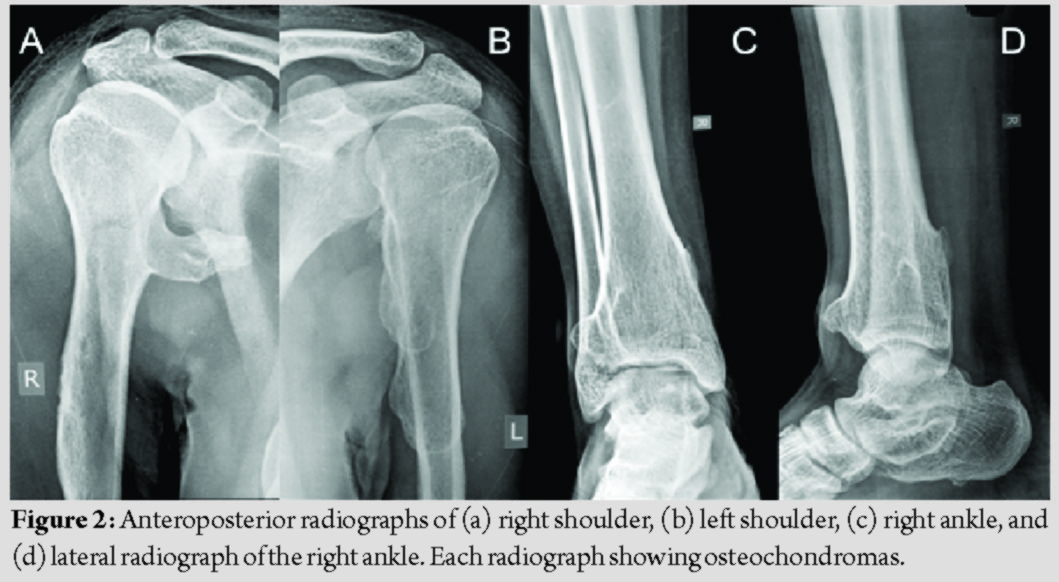