Case Report: A 45-year-old patient was diagnosed with posterior dislocation of hip with ipsilateral femur neck and acetabulum fracture. Plan for emergent hip reduction and primary surgical fixation of fracture fragments was made. Intraoperatively, posterior wall acetabulum fracture was found to be excessively comminuted and non-amenable for fixation and femoral head was found to be avascularized. Subsequently, plan was changed to total hip replacement with acetabular defect reconstruction. At 1-year follow-up, no aseptic loosening was observed on radiographic views of pelvis, with total Harris Hip Score of 91.

Conclusion: Early operative management for such complex injuries is a necessity. Definitive management in the form of primary fracture fixation/arthroplasty should be decided intraoperatively.

Ipsilateral dislocation of hip with associated femur neck and acetabulum fracture is a rare entity [1]. These types of injuries are mainly the result of very high-energy trauma [2]. Associated injuries of thorax, abdomen, and brain which may endanger the prognosis of the patient may be present [3]. Despite prompt and effective strategized treatment, its management remains a challenge, with complications including femur head aseptic necrosis and hip joint secondary degenerative arthritis [4]. Ideal management revolves around either fracture fragments fixation or hip joint replacement, with a very little literature being present to support either of the diagnosis [5]. We report an unusual case of posterior hip dislocation with ipsilateral femur neck and posterior wall acetabulum fracture.

A 45-year-old male patient suffered a high-energy trauma when he was driving the vehicle and was hit from side from a trolley coming from opposite side on his right side. The patient was taken to the emergency block at a local hospital where the patient was stabilized and referred to our hospital for further management. At our hospital after making sure patient is stabilized, skin traction was given and X-rays were done. Following radiographic analysis, the patient was found to be suffering from posterior hip dislocation with ipsilateral femur neck fracture with posterior wall acetabulum fracture (Fig. 1). 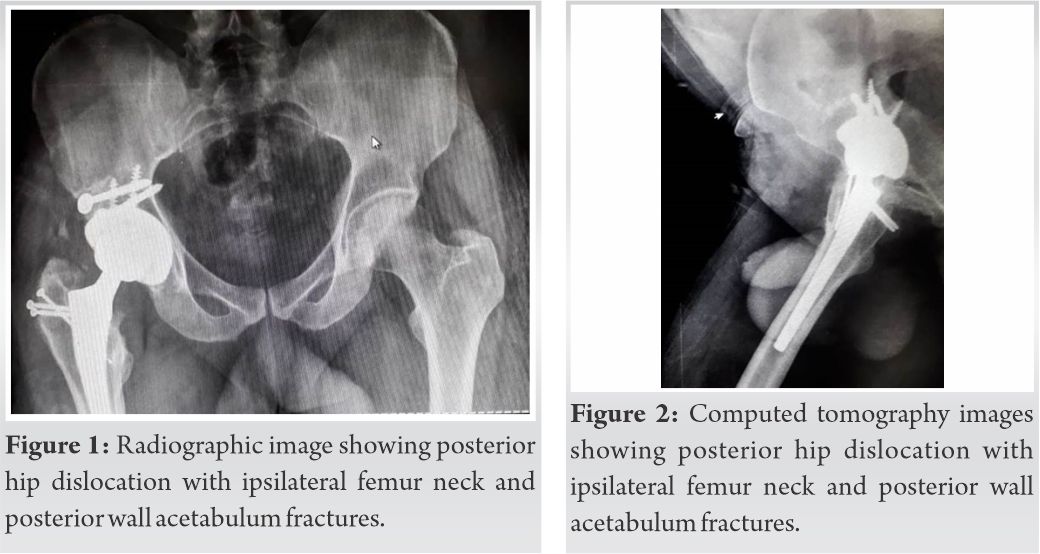 In our case, closed reduction had no effect as posterior segment of the acetabulum along with the associated femur neck fracture, hampered the reduction of the hip joint. Plan for emergent hip reduction and primary surgical fixation of fractures was made. With the patient in floppy lateral position, Kocher-Langenbeck approach was used for exposure and primary fixation of fractures [6]. Extended trochanteric osteotomy had to be done for better intraoperative visualization as the femoral head was present deep within the tissues and thus could not be visualized and to have a supratectal visualization of the acetabulum as fracture was seen to be extending there [7].On opening of the fracture site, posterior wall acetabulum fracture was found to be excessively comminuted non-amenable for fixation and femoral head was found to be avascularized, (Fig. 2) with no bleeding on drilling of the femoral head. Subsequently, plan was changed intraoperatively and uncemented total hip replacement with acetabular defect reconstruction with bone graft from femoral head was done. Postoperatively, the patient received 1.5 g of cefuroxime twice daily for 3 days with Ecosprin and indomethacin started from post-operative day (POD)-1 for prophylaxis of thromboembolism and heterotopic ossification, respectively, for 6 weeks. Rehabilitation was started from next day with high sitting, static quads, and knee bending. From POD-2, the patient was mobilized, with full weight-bearing walking started. At 1-year follow-up, no aseptic loosening was found on anteroposterior view of pelvis with total Harris Hip Score of 91 (Fig. 3) [8]. 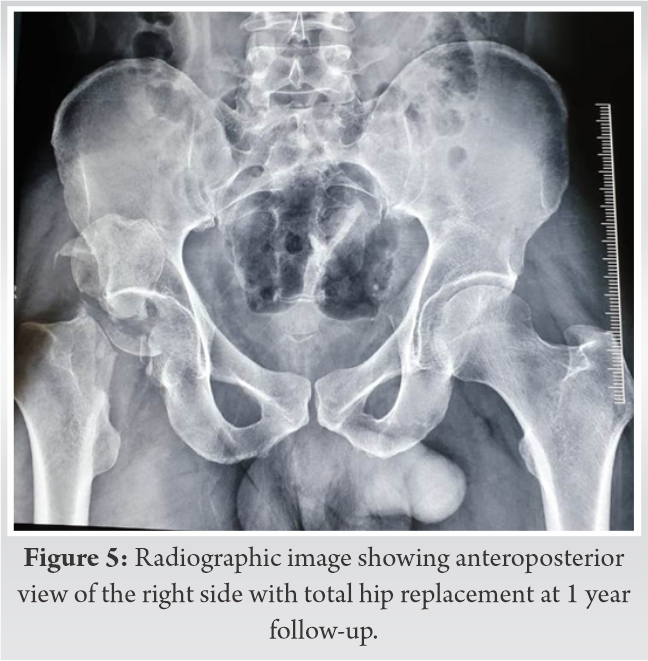 Post-traumatic complex fracture dislocations, namely, posterior dislocation of hip with ipsilateral femur neck and acetabulum fracture, post a major challenge for the treating surgeon in deciding the best possible management [5, 13]. Patients postoperatively may encounter a serious challenge in terms of the functional outcomes and activities of daily living [3, 11]. Treatment options include either internal fixation or primary arthroplasty [14]. Current literature still lacks clarity on management guidelines for such complicated injuries with either fracture fragments fixation or hip joint replacement and remains to be controversial [15-18]. Secondary to osteosynthesis, aseptic necrosis, and secondary osteoarthritis remain a serious issue in due course of time [13, 19]. Further, a surgeon dealing with such complex cases should be familiar with both management options including fracture fixation and joint replacement, as there remain high chances of conversion to primary joint replacement intraoperatively where femur head is found to be avascularized or there is the presence of arthritic changes in the hip.

In the present study, posterior approach to the hip was used. Posterior approach to the hip aids in simultaneous management of these complex fracture dislocations, where there is a need to have access of both proximal femur and acetabulum at the same time, circumventing any additional trauma to the soft tissues of nearby area [6, 20]. The previous literature cites a total of 18 cases of complicated fracture of femur head/neck with acetabulum, where two were managed with primary fracture fragments fixation and five were managed with primary hip joint replacement [5, 13]. However, we could not find any article relating to the complex trauma of posterior dislocation of the hip with ipsilateral femur neck and acetabulum fracture, as in the present study. 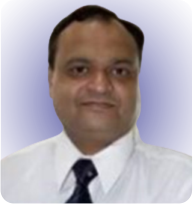 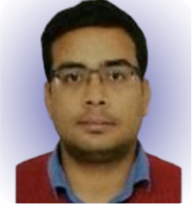 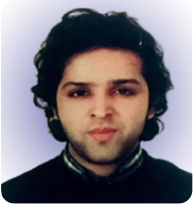 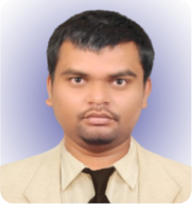 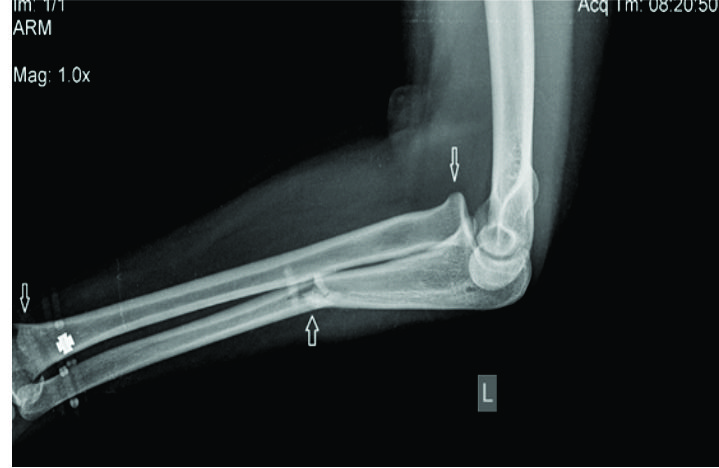 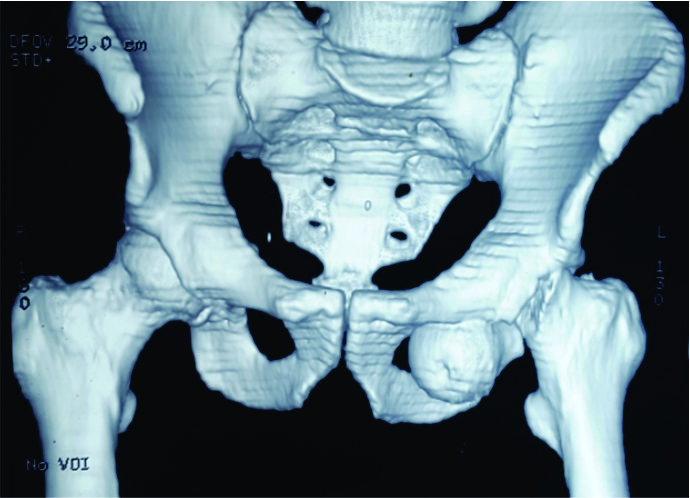