Conclusion: Pediatric anterior hip dislocation, even in the absence of head trauma, can cause symptomatic HO to the extent of near ankylosis of the hip joint. This can be managed with surgical excision and prophylactic radiation, with satisfactory clinical results.

Traumatic hip dislocation in the pediatric population is uncommon accounting for <5% of hip dislocations and can result from low-energy mechanisms due to laxity of periarticular soft-tissue structures [1] . In adolescents, hip dislocations typically require a higher energy mechanism [2]. Anterior dislocation is particularly rare with posterior dislocations accounting for 90–95% of all cases [3, 4, 5] and with 4:1 male predominance [6]. Traumatic hip dislocations can be associated with early and late complications. Early complications include femoral head physeal injury, irreducible dislocation, or incongruent reduction due to tissue interposition after closed reduction, associated fractures of the pelvis and femur, and nerve palsies [7]. Late complications include osteonecrosis of the femoral head, coxa magna, osteoarthritis, and heterotopic ossification (HO) [7]. Closed reduction is the hallmark treatment; however, this must be done in a controlled and monitored environment. Most are reducible with gentle manipulation, urgent reduction within 6 h reduces risk of osteonecrosis [5, 7]. If not done carefully, epiphysiolysis can occur during manipulation adding significant morbidity to the patient’s long-term outcome [8]. Post-reduction radiographs must be scrutinized and the threshold for advanced imaging should be low to ensure a congruent reduction. CT or MRI are effective means to determine if interposition of bony fragments or periarticular soft-tissue exists [9]. There is no consensus on management after successful closed reduction without associated fracture. Recommendations vary from casting immobilization, bed rest, traction, or immediate protected weight bearing. An open reduction may be required in cases of associated pelvic or femur fractures or in the event of incongruent reduction. HO is the pathologic formation of bone in the soft tissues such as muscle and connective tissue [10]. Its development aligns with the physiologic process of fracture healing [11]. It can occur in the setting of fracture, burn, arthroplasty, or neurologic injury. The presence of HO does not always represent a clinically significant development. In the setting of trauma, traumatic brain injury (TBI) increases the rate to 3–20% [12]. Without TBI the rate of symptomatic HO is low. We report a case of traumatic anterior hip dislocation treated with closed reduction with subsequent development of symptomatic anterior hip HO in a non-head injured patient. The current literature describing this complication is scarce. We describe the subsequent excision and prophylactic measures used for an excellent clinical outcome.

This is the case of a 14-year-old female with no medical history who was involved in an all-terrain vehicle (ATV) accident. She fell off the ATV after hitting a ditch and landed on her right hip. At presentation, she complained only of the right hip pain, physical examination revealed a short and externally rotated right leg. She was neurovascularly intact. Radiographs revealed a right anterior hip dislocation. At the time of the accident, she was wearing a helmet and reported no head trauma. She was evaluated by the trauma team and found to have no other associated injuries. She underwent a successful closed reduction under conscious within 12 h from time of injury. Her hip was stable to range of motion post-reduction and she remained neurovascularly intact. CT imaging revealed a concentric reduction with a nondisplaced transverse acetabular fracture and mild anterior acetabular rim comminution (Fig. 1). These fractures were treated nonoperatively. She was instructed to maintain flat foot weight-bearing limited to ten pounds on her right lower extremity and standard anterior hip dislocation precautions. At 3 weeks follow-up, radiographs showed maintained alignment and concentric reduction of the hip and acetabulum. She was neurovascularly intact with hip flexion to 80° passively, limited by pain. She again followed up 6 weeks post-injury with maintained alignment on imaging. At this time, radiographs showed initial signs of developing HO on the iliac oblique view. Physical examination showed mild tenderness with hip flexion beyond 90° with normal hip internal and external rotation and hip abduction and adduction. At the patient’s next follow-up at 12 weeks post-injury, radiographs showed the HO had increased in size, originating near the lesser trochanter, and extending up anteriorly at the hip (Fig. 2). At this point, her physical examination showed hip flexion of 0–80°. The patient and her family were informed that surgical excision would likely be needed but would delayed until the ossification had time to mature. Repeat radiographs at approximately 6 months post-injury revealed the HO continued to progress anteriorly. At this point, the patient had severe range of motion limitations that were significantly inhibiting her ability to perform activities of daily living. Physical examination demonstrated hip flexion of only 10°, internal/external rotation of 5/35°, and abduction/adduction of 35/10°. At 9 months post-injury, radiographs showed near bridging heterotopic bone from the region of the lesser trochanter to the anterior aspect of the acetabulum (Fig. 3). Range of motion included hip flexion of approximately 15° before pelvic compensatory motion initiated during gait and hip abduction/adduction of 30/10°.

CT imaging was obtained and showed near complete heterotopic ankylosis of the hip with the joint itself intact (Fig. 4a and b). The Brooker classification for HO is typically used to describe HO in the setting of total hip arthroplasty; however, when applied here the patient fit a Brooker Type 3 classification [13] defined as a bone projection from either the pelvis or proximal femur with <1 cm of space before complete ankylosis. At this stage, the HO appeared matured on imaging. The patient was scheduled for surgery. The risks and benefits of HO prophylaxis with indomethacin versus radiation therapy were discussed with the patient and her parents. Consultation was obtained from radiation medicine for prophylactic photon radiation therapy. She was deemed a good candidate for a pre-operative radiation dose and her parents elected to pursue this option. At approximately 1 year post-injury, the patient received seven gray photon radiation in one fraction to the right hip, which was performed <4 h preoperatively per established recommendations for use as prophylaxis against HO [14]. She was, then, taken to the operating room. A mini Smith-Peterson anterior approach to the hip was undertaken between the interval of the tensor fascia lata and the sartorius. Once the fascia was incised that blunt dissection was taken down to the heterotopic mass which was easily identified. An osteotomy was performed at the stalk base just above the level of the lesser trochanter, the HO tracking along but not involving the ileopsoas. On pre-operative CT imaging, the ossification mass was measured to be 7.3 cm. The excised portion was measured to be 6.5 cm (Fig. 5a). Additional was done to smooth the cortical surface at the osteotomy site (Fig. 5b). After excision, the patient’s passive range of motion demonstrated hip flexion to 90°, internal/external rotation of 30/45°, and abduction/adduction of 45/10°. The patient was discharged home with protected weight-bearing precautions and orders for physical therapy for gait training and stretching.

This is a case of anterior hip HO after an anterior hip dislocation in a non-head injured 14-year-old patient. Vialle et al. [3] evaluated a series of 35 traumatic pediatric hip dislocations. In this series, only two were anterior dislocations (6%) and nine of 35 required open reduction. Only one had a major complication of displaced fracture of femoral physis which led to total head avascular necrosis (AVN). Another series by Mehlman et al. [5] assessed traumatic hip dislocation in 42 children (average 9 years 10 months). They had an average follow-up of 10 years 1 month. None of the reported cases were anterior hip dislocations. This study highlighted the disparity in traumatic pediatric hip dislocations compared to adults as 64% were due to low energy injuries. About 17% had ipsilateral fractures about the hip. AVN of femoral head developed in 12% with duration of dislocation as the only statistically significant factor (if >6 h 20 min then higher risk of AVN). About 78% continued to participate in high demand activities. Anterior hip dislocation in the pediatric population presents important challenges. Femoral head AVN is the most concerning risk and care must be taken to perform reduction in a timely and careful manner to preserve the blood supply and avoid physeal disruption. HO is a known but extremely rare complication, especially without associated head trauma. In the rare case, where HO does develop, it is often asymptomatic; thus, a review of the literature did not yield any specific studies on HO after pediatric hip dislocation. In this case, prophylactic radiation therapy proved useful, but carries with it a risk profile of wound complications and a remote chance of secondary cancer from radiation therapy [14]. Future strategies for combating HO development may focus on limiting oxidative stress which has been implicated as a possible cause for HO. Stimulation of the endogenous antioxidant system through Nrf-2 may slow or stop the formation of the heterotopic bone [15].

Pediatric anterior hip dislocation, even in the absence of head trauma, can cause symptomatic HO to the extent of near ankylosis of the hip joint. This can be effectively managed with surgical excision and prophylactic radiation therapy with satisfactory clinical results.

Although rare, symptomatic anterior hip HO causing near hip ankylosis in the pediatric population can be satisfactorily treated with surgical excision and prophylactic radiation therapy. 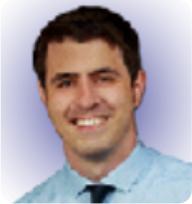 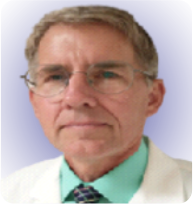 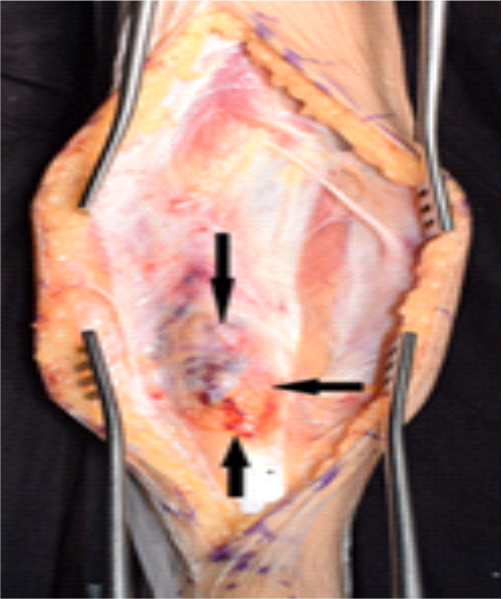 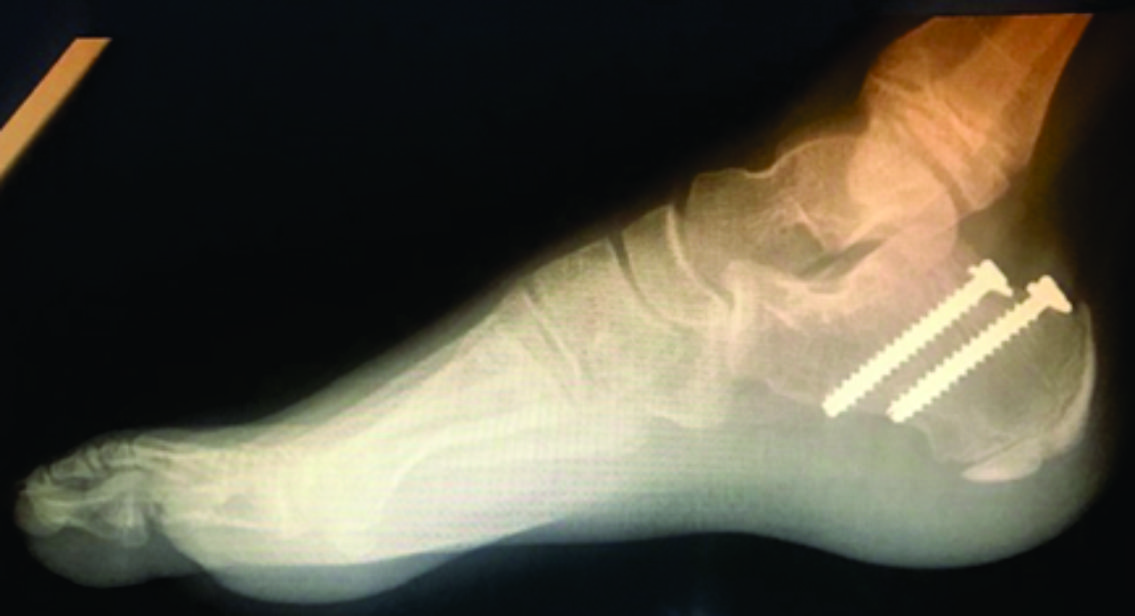