1. A very unusual radiological appearance of pseudo-acetabulum by bone formed by heterotopic ossification

Case Report: 5 year female with post-traumatic neglected hip dislocation with heterotopic ossification forming a pseudoacetabulum postero-superiorly in which femur head was lodged. The girl was operated by open reduction using Moore’s Posterior approach and showed good results. Here is a mention of a rare case with a good 18 months follow up with no complication .

Conclusion: Post-traumatic neglected posterior hip dislocation mostly requires open reduction and relocation of femoral head in original acetabulum with concentric reduction. Heterotopic ossification is a rare but known complication of traumatic dislocation of hip in children. Good results can be achieved in such cases and regular follow-up of patient is required post-operatively.

A 5 year female child resident of a village in Uttar Pradesh presented with history of fall from height in school after which she was unable to walk due to pain in left hip region. The patient was taken to local quack where she was treated with massaging and wooden splintage around left hip region for 2-3 weeks and was kept on bed rest. After removal of splintage patient was unable to bear weight on left lower limb due to pain. The patient was brought 4 months post trauma to our hospital for treatment. On clinical examination patient had findings suggestive of posterior dislocation of femoral head. She also had true and apparent shortening of 4 centimetres. Range of motion at left hip was painful and restricted , associated with muscle spasms so under normal condition telescopy couldn’t be illustrated but it was found to be positive under anaesthesia. Examination of opposite hip, spine and both knees was normal. X-ray showed posterior dislocation of hip with heterotopic ossification postero-supero-laterally forming pseudo-acetabulum ( Fig. 1 & 2).There was no evidence of acetabular fracture or femoral head/neck fracture. Same findings were confirmed on C.T. scan ( Fig. 3 & 4). All lab investigations were within normal limits including serum calcium, phosphorous and alkaline phosphatase. Patient was kept on skeletal traction for 3 weeks with weight of 3 kilogram . X-rays taken after 3 weeks of traction revealed no descent of femoral head or any other change. The patient was operated by Moore’s southern approach open reduction of dislocated hip after removing the fibrosis in original acetabulum and clearing it, releasing the capsule. Heterotopic mass was excised and head was reduced in orginal acetabulum followed by capsulorrhaphy. Intra operatively reduction was checked and was stable, congruent and concentric through all range of motions of hip. Under C-arm guidance head was fixed to acetabulum with a single K wire of 1.6 mm (0.062 inch) as a precautionary measure in view of non compliance of patient and parents( Figure 5). Post operatively child was kept in hip spica for 8 weeks and course of indomethacin was given for 3 weeks [5]. Patients post operative status was uneventful. Spica cast was changed at end of 3 weeks under anaesthesia. K wire was removed at 6 weeks along with spica cast (Fig. 5). On examination after removal K wire and spica cast under C-arm congruency of reduction and stability of femoral head was checked through out the range of motion of hip. Thereafter gradual mobilisation of hip was started. The patient was kept on nil weight bearing for 1 month, followed by partial weight bearing for 3 weeks and then full weight bearing. Histopathology report of excised mass forming pseudo-acetabulum revealed as mature bone suggestive of heterotopic ossification. Currently 18 months post surgery patient is able to walk full weight bearing with full range of motion of left hip and no limb length discrepancy (Fig. 6). The patient is also able to squat and run with no X-ray or clinical evidence of avascular necrosis of femoral head (Fig. 6). Patients entire heterotopic mass was removed and throughout our follow-up 18 months there were no evidence of reappearence of the same.

Heterotophic ossification in shape of a pseudoacetabulum in cases of neglected hip dislocations are not reported. Open reduction with excision of these “Psuedo-Heterotopic Acetabulum Phenomenon” can give good results even in these neglected cases. More studies and evaluation regarding the same is necessary.

RELATED POSTS
Pseudo-Acetabulum due to Heterotopic Ossification in a Child with Post Traumatic Neglected Posterior... 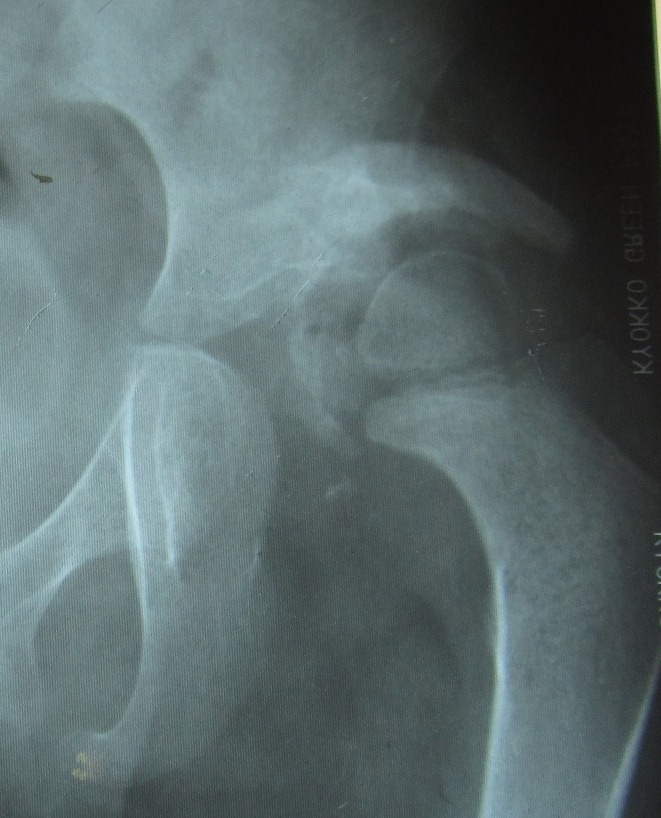 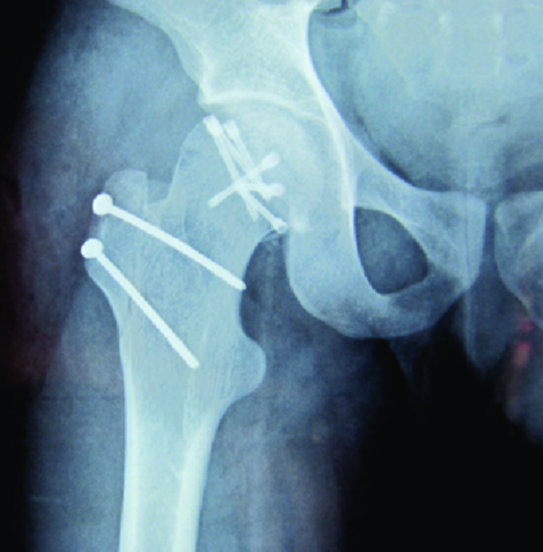 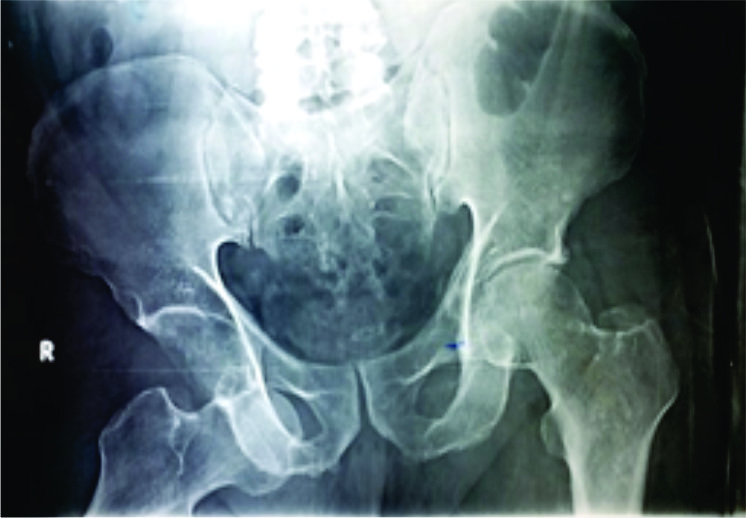 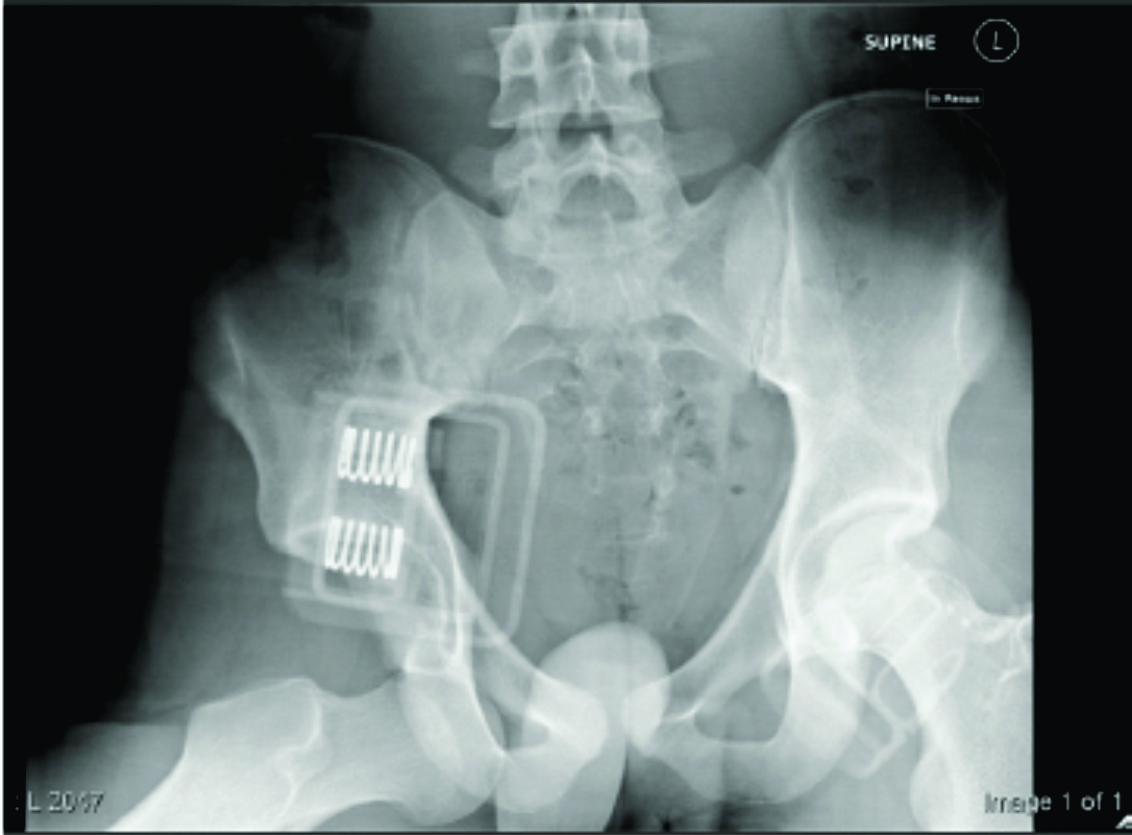