Isolated Spontaneous Atraumatic Avulsion of Lesser Trochanter of Femur-A Pathognomonic Sign of Malignancy in Adults? A Case Report and Review of Literature

Isolated atraumatic avulsion of lesser trochanter of femur in adults should raise highest index of suspicion for an underlying malignant process, that must be investigated, utilising different modern-day diagnostic tools.

Introduction: Avulsion fractures of lesser trochanter (LT) of femur are generally seen following trauma with intertrochanteric or sub trochanteric fractures. Non-traumatic fractures of LT could oc-cur due to sudden violent contraction of the iliopsoas muscle that inserts on the LT; during vigorous exercise, or sudden pull involving flexion of hip. These are seen commonly in adolescents where the physis has not fused yet. Such a scenario in an adult patient most often or not leads to a diagnosis of an underlying malignancy or metastatic lesion.
Case Report: A 60-year-old female patient, presented to the outpatient department of our institute with pain on walking, with no history of trauma. X-ray showed an incidental finding of avulsion of LT of femur. Magnetic resonance imaging showed a large intramedullary tumour in the metaphysis though she had no symptoms or signs of malignancy. On further evaluation, she was diagnosed with primary lung carcinoma with widespread metastasis. Biopsy from the proximal femur also revealed a metastatic lesion. She was given palliative treatment in the form of a proximal femoral nail after which she was started on chemoradiation.
Conclusion: A high index of suspicion of malignancy should be maintained in atraumatic fracture of LT in adults until proved otherwise.
Keywords: Lesser trochanter fracture, metastasis, lesser trochanter avulsion, adults, tumour, patho-logical fracture.

Introduction
Isolated lesser trochanter (LT) fractures in adults is a rare phenomenon. They are more commonly seen in patients of younger age group where the physis is open [1, 2]. Sudden violent contraction of iliopsoas muscle can lead to avulsion of LT [3]. This could occur during some form of vigorous ex-ercise or sports. Although there have been reported cases of such avulsions in adults, the majority of those cases had an underlying malignant process that was diagnosed later on. Here, we present a similar case of a patient with no history of trauma, initially diagnosed with an isolated avulsion of LT and further diagnosed with widespread metastasis due to a primary carcinoma of lungs.

Case Report
A 60-year-old female patient, presented in our outpatient department with complain of pain in her left hip, of 1-week duration. She was previously asymptomatic, when in the morning while getting up from her bed, she experienced a sudden episode of pain. The pain was sharp and intermittent, that increased on weight bearing and was relieved on lying down when she kept a pillow under her knee. She had no history of trauma and had no pain elsewhere. She was leading an active life where she was able to perform her activities of daily living. She had no history of weight loss or loss of appetite. She had no history of any post-menopausal bleeding, melena, or hemoptysis. She gave a history of occasional seasonal cough that was relieved with medicine. We initially advised her bed rest with skin traction. 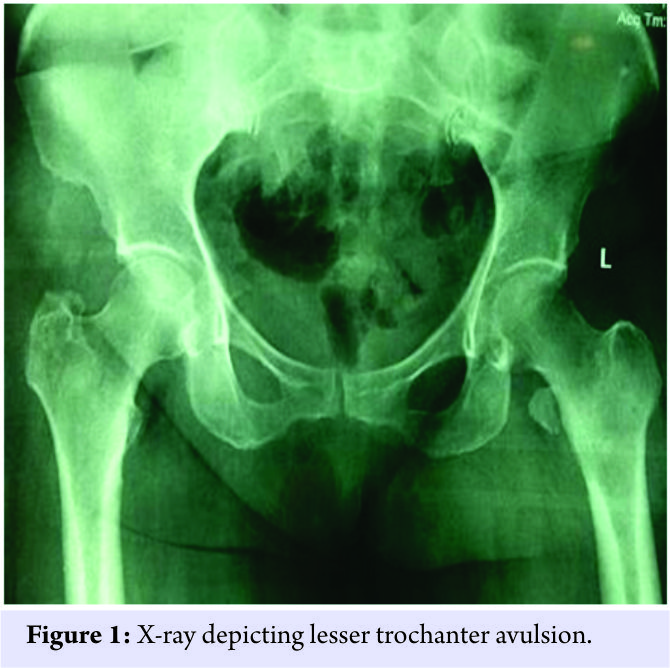 Her plain radiograph showed an avulsion of LT of left femur (Fig. 1). Magnetic resonance imaging (MRI) of proximal femur and pelvis was done, and it revealed a pathological fracture of left femoral LT due to a long intramedullary tumour in meta-diaphyseal region. It measured 11.3 × 3.7 × 4.0 cm and was hypointense in T1; heterogeneous hyperintense in T2 (Fig. 2).

Core needle biopsy was done from the proximal femur, and it confirmed metastatic deposits. The patient was given palliative treatment in the form of a proximal femoral nail (PFN) to prevent any pathological fracture and was started on chemoradiation under the radiotherapy department of our institute. 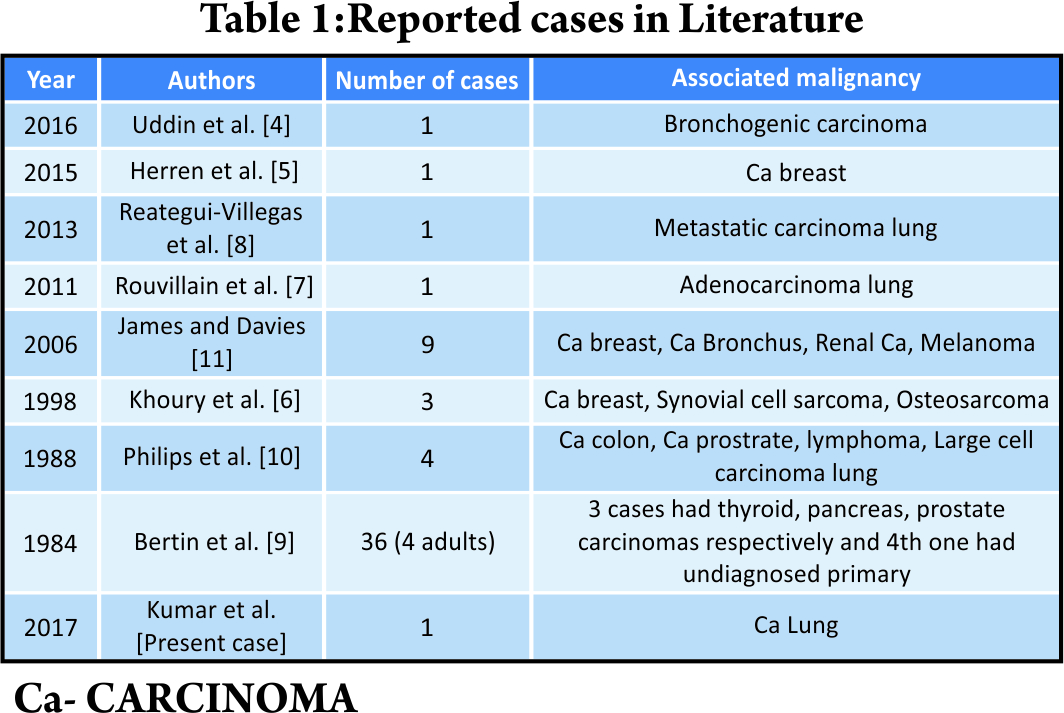 Discussion
Isolated fractures of LT of femur are rare entities in adults. They are commonly seen in adolescent athletes with non-fused apophysis. There have been isolated instances of absence of any underlying pathological process in adults presenting with an LT avulsion [3]. In almost all the cases reported in literature, malignancy was diagnosed later on [4, 5, 6, 7, 8, 9, 10, 11]. 24 cases with underlying ma-lignancies causing LT fractures have been reported as per our literature search (Table 1). Uddin et al. reported a case where a 48-year-old female was later on diagnosed with primary bron-chogenic carcinoma where LT avulsion was her first clinical manifestation [4]. Herrenet al. reported a similar case with a 61-year-old female when her symptoms began during a chiropractor treatment. She was diagnosed with left-sided carcinoma breast with metastasis [5]. Khouryet al. reported 3 cases in adults who were all diagnosed with malignancies [6]. Rouvillainet al. termed isolated LT fracture in adults as an early indicator of tumour infiltration. In their case, a 63-year-old man was diagnosed with adenocarcinoma of pulmonary origin with widespread metastasis [7]. Reategui-Villegas et al. described isolated fracture of LT as the first manifestation of metastatic lung carcinoma in their case report [8]. Bertinet al. reported 36 cases of LT avulsions out of which 4 cases occurred in adults. All these 4 cases were found to have metastatic deposits that led to the fractures. There were primaries in thyroid, pancreas, prostrate in 3 of the cases, respectively, while in the 4th case, the primary lesion could not be traced [9]. Four cases were reported by Phillips et al. [10]. In a study by James and Davies it was found that 60% of the 15 atraumatic cases of LT avul-sions, were due to metastasis [11]. Whenever a case like the present one comes for evaluation, high index of suspicion should be main-tained all throughout till a malignancy could be confirmed and a primary could be found. Staging of the tumour is of primary importance in terms of what treatment can be offered to the patient. MRI can help to study the soft tissue extension of the tumour and better planning for tumour exci-sion if needed [11, 12]. In our case, MRI helped us to delineate the metastatic tumour and then we went ahead to find the primary lesion with CECT. Biopsy should be done to confirm the diagnosis once all imaging has been done. Staging also helps in deciding the treatment options. In early stages, primary resection of the lesion with a tumour prosthesis could be a viable option [7]. In advanced stages of disease, palliative care with a prophylactic intramedullary implant like a PFN could be used to prevent any impending pa-thological fracture. Since our patient had an advanced disease with Mirel’s score of 12, we gave her palliative treatment. She is currently at home under supportive care. In isolated cases, there may not be any malignant pathology, but this occurs in rarest of rare in-stances. In such cases conservative management is sufficient [3, 13]. However, sometimes what seems like an isolated LT fracture could be a part of a propagating inter-trochanteric fracture line [13]. Fixation becomes a necessity in such cases with a dynamic hip screw or an intramedullary nail.

Conclusion
In an old patient presenting with an isolated atraumatic LT avulsion, there should be a high index of suspicion of a malignant process underneath, until proved otherwise, and this must be investigated with modern-day diagnostic modalities such as MRIs, CT scans, and radio-labeled bone scans. Staging is a necessary tool to decide on the treatment modality. Such injuries could be termed pa-thognomonic for underlying malignant lesion or metastasic deposits.

Clinical Message
Adults presenting with an isolated atraumatic LT avulsion must be investigated with the usage of modern-day diagnostic modalities. Such injuries are commonly caused by underlying malignant process and could be termed a pathognomonic sign of tumour infiltration.

RELATED POSTS
Paratesticular Paraganglioma with Metastasis to D1 Vertebra- A Case Report and Review of Literature... 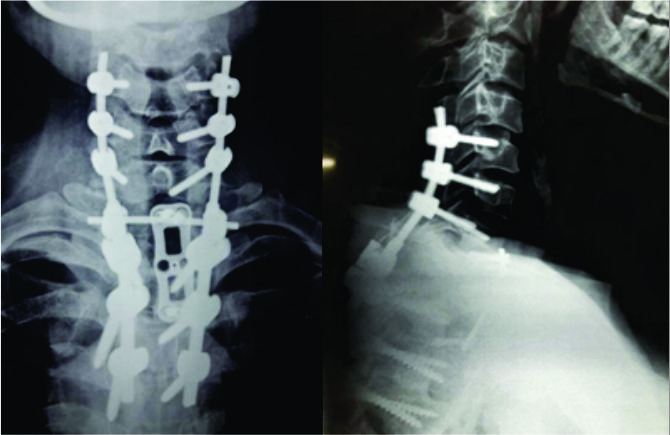 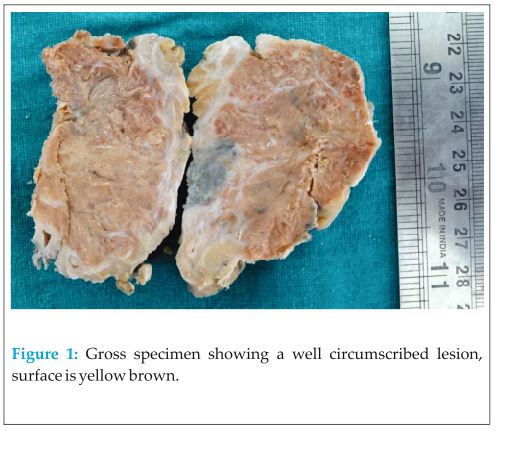 Open Reduction and Internal Fixation of Posterior Fracture Dislocation of the Shoulder Made Easy!... 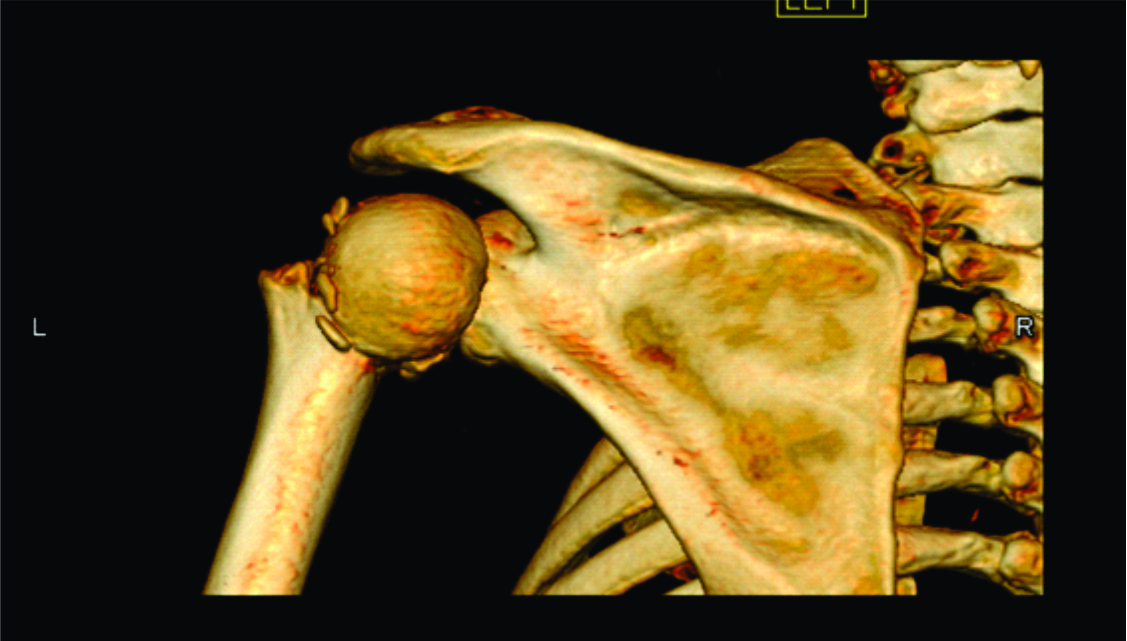