Introduction: Tuberculosis (TB) can present in different ways and should be regarded as one of the possible diagnoses of several bony, cutaneous, and neurological pathologies.

Case Report: We present a case report of a 13-year-old female, who presented with swelling of the left index finger, then diagnosed to have Pulmonary and extra-pulmonary TB (Spina Ventosa, Lichen scrofulosorum, cervical lymphadenitis, mediastinal lymphadenopathy, and a frontal lobe Tuberculoma). We further discuss its features and management. The patient’s condition improved on the initiation of Anti Koch’s Treatment, and debridement of the left index finger’s lesion.

Conclusion: Patients can be asymptomatic with widespread TB. As TB can present in different ways, when examining a patient, always consider the possibility of multiple organs being involved.

Tuberculous dactylitis, involving the short tubular bones of the hands and feet, is seen commonly in children [1]. It is a rare presentation of extra-pulmonary tuberculosis (TB) and it constitutes <1% of skeletal TB [2]. Lichen scrofulosorum is also known as TB cutis lichenoides, is a rare tuberculid that presents as a lichenoid eruption of minute papules in children and adolescents with TB [3]. The eruption is usually associated with a strongly positive tuberculin test [4]. TB can present in different ways and should be regarded as one of the possible diagnoses of several bony, cutaneous neurological pathologies [1]. Here, we present a case report of a 13-year-old female with pulmonary and extra-pulmonary TB.

A 13-year-old female was brought to the Out Patient Department of a tertiary level hospital, with complaints of swelling of the left index finger for 3 months, and pain in the left index finger for 2 months. There was no history of trauma. The patient was apparently all right 3 months back when she started developing a small, firm swelling on the left index finger, over the Proximal Inter Phalangeal (PIP) joint. Initially, it was 1×1 cm, which progressed to the current size (3 × 2 cm). The swelling was firm in consistency and tender. The patient also complained of pain on touching the finger and on movement. The pain was insidious in onset and dull aching in nature. The patient also complained of asymptomatic skin lesions on both the flanks, back and itchy lesions on both the legs, for 3 months.
The patient had no similar episodes in the past. There was no past history of TB or contact. The patient gave a history of weight loss and evening rise of temperature for 3 months. She had no other associated symptoms. There is no history of similar episodes in the family.

A swelling was present involving the PIP of the left 2nd phalanx (Fig. 1). The skin over the swelling was hyperpigmented and tense. There was no discharge of any kind. The swelling was fixed, non-mobile and firm. Tenderness was present over the PIP of the left 2nd phalynx. She had multiple non-tender, bilateral palpable cervical lymph nodes. She had multiple well-defined small closely grouped skin colored to hyperpigmented papules with a smooth surface over both flank regions and back (Fig. 2). She also had a few well-defined hyper-pigmented papules and macules over both legs, (suggestive of Prurigo mitis) (Fig. 2). 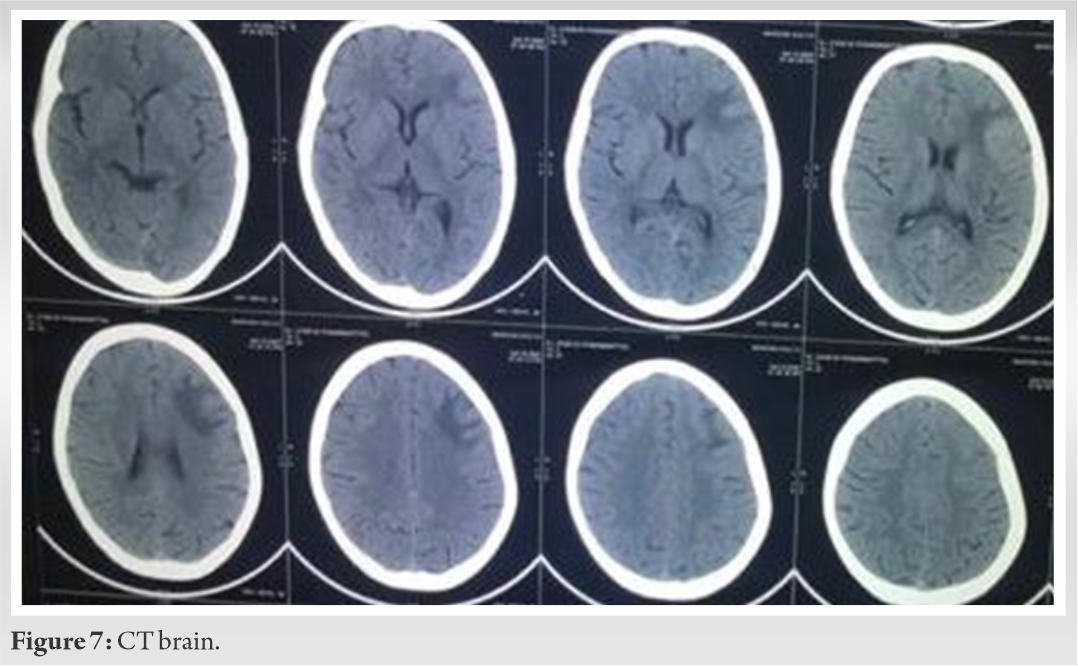 Two days after initiation of treatment, the patient experienced an episode of absent seizure. Inj. Epzoin 100mg was given to counter the seizure. Her Electroencephalography (EEG) and Computed Tomography (CT) Brain (plain + contrast) were done. As she had an implant in her hand, an MRI could not be done. EEG was within normal limits but CT Brain (Fig. 7) showed a 1.7 × 1.6 cm well-defined conglomerate of ring and disc enhancing lesion involving the left frontal subcortical white matter with mild perilesional edema and overlying gyral thickening and effacement, suggestive of a Tuberculoma. The patient was started on Tab. Levipil 250 mg (morning) and 500 mg (evening). The patient was advised to follow-up every month.
The patient’s condition improved on the initiation of AKT, and debridement of the left index finger lesion. At 2 months follow-up, the patient did not experience another episode of seizure, and the condition was improving. The patient was on AKT for the remainder of the treatment. JESS was removed and the finger was put in a splint for a week. Active and passive range of motion exercises was initiated right after.

Tubercular dactylitis is a rare presentation of extrapulmonary TB and it constitutes less than 1% of skeletal TB [2]. It is more common in children, although it is typically uncommon after the age of 6 years [1]. The disease is slowly progressive [5], and diagnosis is often delayed due to multiple factors, including the paucibacillary nature of the lesion, as smears are often negative; non-specific clinical manifestations of the disease; the ability of occurrence of the disease in the absence of pulmonary TB; the lack of a rapid microbiological diagnostic method; and poor awareness among treating physicians and surgeons who do not have much experience with this disease [1].
It is commonly seen in the short bones of the hands, then in the feet. During childhood, these bones have a good blood supply through a large nutrient artery entering almost in the middle of the bone [6]. The first inoculum of infection is lodged in the center of the marrow cavity and the interior of the short tubular bone is converted gradually into a TB granuloma [6]. This leads to a spindle-shaped expansion of the bone with the occlusion of the nutrient artery of the involved bone and the destruction of internal lamellae [6].
Similarly, Lichen scrofulosorum is also a rare tuberculid, initially described by Hebra in 1860 [7]. Lichen scrofulosorum is usually seen in children and young adults suffering from systemic TB, either pulmonary or extrapulmonary, and very rarely after BCG vaccination [8]. Diagnosis of Lichen scrofulosorum mainly lies in histopathology, tuberculin skin testing, and evidence of systemic TB in the body [9]. Treatment of Lichen scrofulosorum is the same as that for systemic TB.
Management of Spina Ventosa is also with the help of AKT. Surgical debridement is necessary in those cases, where a joint is involved and ankylosed. If a metacarpophalangeal, metatarsophalangeal or interphalangeal joint is ankylosed in awkward position excision arthroplasty or a corrective osteotomy is indicated [6]. As the PIP joint of the 2nd left index finger was involved in this case, we carried out debridement of the joint, and followed it with a corrective procedure via JESS fixation.
Tuberculomas are usually located at the corticomedullary junction and periventricular region, as expected for hematogenous dissemination [10]. Our patient presented with a lesion involving the left frontal subcortical white matter. The patient was started on AKT and was on it for the remainder of the treatment period.

Patients can be asymptomatic with widespread TB. As TB can present in different ways, when examining a patient, always consider the possibility of multiple organs being involved.

A thorough examination of the patient presenting with a case of spina ventosa, will minimize the error of not spotting its asymptomatic presentations; thus decreasing morbidity and accelerating recovery.