Introduction:Bicondylar Hoffa fractures are extremely uncommon injuries and there have only been a very small number of cases documented in the literature.

Case Report:A 28-year-old male presented to emergency department with injury to right knee and leg. X-ray was taken; however, they were not sufficient to determine the precise fracture pattern, so computed tomography scan was done for establishing diagnosis. Fracture managed successfully using compression screws and buttress plate with satisfactory result after a follow-up period of 1 year with ROM 20–120° with no signs of Avascular necrosis or arthritis and we also discussed the appropriate treatment options with supporting literatures.

Conclusion: We conclude by describing a rare case of Bicondylar Hoffa fracture managed by open reduction and internal fixation with cancellous screws and Buttress plating. All cases of unicondylar Hoffa must be evaluated with a high index of suspicion to not miss the cases of Bicondylar Hoffa, which is extremely uncommon injury.

Hoffa fracture is an uncommon and difficult articular injury in which a significant condylar articular component of the distal femur is separated from the distal femur by a coronal split. They were called after Albert Hoffa, who characterized them in 1904, as an unusual injury in adults and even rarer in children, but they were first documented by Freidrich Busch in 1869 [1]. Although these fractures are frequently mentioned in conjunction with supracondylar or intercondylar distal femoral fractures, they are unusual in isolation and become even more so when bicondylar is involved. A shearing or tangential force delivered to the femoral condyles with the knee at 90° or more of flexion is thought to be the cause of damage [2]. Internal fixation procedures have been reported, with various functional effects, including the use of cancellous or headless screws, plates, or a combination of the two. For the fixation of these unstable fractures, no single “gold standard” method has been accepted to date.

A 28-year-old male presented to an emergency department with closed injury to the right knee and right leg; when the bike, he was riding collided with an oncoming truck. On admission, 3-h post-injury, physical examination revealed a painful, swollen right knee. The patient was unable to perform active straight movement of involved limb. No signs of acute ischemia of the lower limb or neurologic deficit were present. Standard anteroposterior (AP) and lateral radiographs revealed distal end femur fracture with ipsilateral shaft tibia fracture (Fig. 1, 2) but were inadequate to define the exact fracture pattern. Non-contrast computed tomographic (CT) scan was performed which established the diagnosis of Bicondylar Hoffa fracture with fracture ipsilateral tibia (Fig. 3). Patient was operated in supine posture, with Swashbuckler approach exposing knee joint. After anatomical reduction, five 6.5 mm partly threaded cancellous lag screws were inserted into the non-articular section, two for lateral condyle, and three for medial condyle. Recon plate which was pre-contoured to match the curvature of the lateral condyle surface was applied in a buttress mode to prevent the proximal migration/displacement of the lateral condyle. The wound was closed in layers and post operatively above knee back slab with 30° of knee flexion was applied for 2 weeks. The key step during fixation was to maintain the knee in flexed position because it relaxed the posterior capsule and the gastrocnemius while also protecting the neurovascular structure.

Outcome
After 2 weeks, knee mobilization started and partial weight bearing started 6-week postoperatively and full weight bearing by 3 and half month when the fracture had united radiographically (Figs. 4 and 5). At 12-month follow-up, there is no signs of avascular necrosis, osteoarthritis, or implant breakage (Fig. 6, 7) and patient had 20–120° range of motion without pain and deformity and functional assessment of patient score was excellent. Patient is able to squat, sit cross leg, climb stairs, and do all his activity of daily living in his latest follow-up (Fig. 8).

Trauma surgeons continue to struggle with Hoffa fractures, which occur when knee is flexed to >90°, axial force on the femoral condyle causes posterior tangential fractures, according to Lewis et al. The lateral femoral condyle is more typically affected since it has a larger AP dimension when the knee is in physiological valgus.
Ul Haq et al. studied that the Bicondylar Hoffa fracture (AO 33B3.3) in their case may have been caused by an upward and posterior force acting on a knee that was hyperflexed without any varus or valgus [3]. Computed tomography (CT) should be performed in all cases of intra-articular distal femoral fractures to analyze the fracture pattern and plan surgical fixation because up to 30% of these fractures are missed on conventional radiography, according to Nork et al. [4].
Conservative therapy, such as skeletal traction, is not suggested, even for undisplaced fractures, because it is filled with risks such as malunion, non-union, stiffness, and secondary osteoarthritis. The gold standard of treatment is surgical management in the form of open reduction and internal fixation.
We adopted the swashbuckler strategy recommended by Dua et al. [5] This made it possible for us to visualize the backs of both femoral condyles, which made it simple to reduce the fracture pieces anatomically. Due to its adaptability and superior imaging of both articular and extra-articular components of the distal femur, the swashbuckler method has been widely used. In addition, it protects the quadriceps muscular belly, allowing for a quicker recovery of quadriceps strength and functionality. There is no need for two incisions because the skin incision is made more anteriorly than in the conventional lateral approach, enabling a clear view of both femoral condyles. We think that a single incision would lead to a quicker recovery of quadriceps strength and range of motion, as well as reduced fibrosis and quadriceps mechanism breach.
For these injuries, Lal et al. described arthroscopic aided reduction and fixation. However, the procedure is difficult technically. For proper anatomical reduction and the exposure required to compress and rigidly fix the fractures with many lag screws, lateral parapatellar arthrotomy enables visibility of the fractures and articular surface [6].
Historically, headless compression screws or the lag screw approach employing either cortical or cancellous screws have been used to treat Hoffa fracture [7]. A cadaveric investigation comparing the strength of fixation utilizing 6.5 mm cancellous screws and 3.5 mm and 4.5 mm cortical lag screws did not reveal any appreciable differences between the cortical and cancellous groups in terms of construct stiffness or pull-out strength. In terms of the anterior/posterior direction of screw insertion and the type/number of screws to utilize, though no consensus have been achieved. Although AP-oriented screws are commonly used to repair Hoffa fractures. Jarit et al. [8] claimed that screw insertion in the posteroanterior direction is biomechanically better than screw insertion in the anterior direction. However, because PA insertion is dangerous, it is difficult to accomplish (with increased chances of neurovascular injuries).
However, compared to the other groups, the 6.5 mm cancellous screws displayed a higher load failure [9]. In other trials, the use of 6.5 and 7 mm cancellous screws has also been associated with high success rates. The main disadvantage of headless screws is that they are short and small in size.
A buttress plate, which can be positioned either posterolaterally or posteriorly, has been used by many authors for added support [10]. To offset the tremendous gastrocnemius’ pull, a buttress plate is needed. Tetsunaga et al. employed a 1/3rd tubular plate as a buttress plate in their series of five instances, in addition to an LCP distal femur plate as a neutralizing plate, and found that a posterior buttress plate is effective in enhancing stability and offered satisfactory short-term outcomes [11]. They did point out, however, that a 1/3rd tubular plate is insufficiently stable on its own and has to be supplemented by a lateral LCP for maximum stability. The usage of a pre-contoured reconstructive plate as a rear buttress plate was described by Min et al., which was placed either posteromedially or posterolaterally. According to the Hospital for Special Surgery rating system, their prognosis was excellent in six patients and good in two others. In this example, in addition to the cancellous lag screws, a 3.5 mm contoured reconstruction plate was put along the extra-articular surface of the lateral condyle for further stability. This reduced the risk of fracture displacement when weight bearing was resumed, allowing for faster rehabilitation and restoration of function.

We described a rare case of Bicondylar Hoffa fracture treated by internal fixation with cancellous screws and buttress plating. To avoid missing a case of unicondylar Hoffa, which is a very uncommon injury, all cases of unicondylar Hoffa must be evaluated with a high index of suspicion. In addition to describing the precise pattern of injury, a CT scan also provides 3D images that are useful for surgical planning. We feel that open reduction and internal fixation (Screws with/without buttress plating) become important to reduce the risk of fracture displacement, allowing for faster rehabilitation and restoration of function.

Although Bicondylar Hoffa fracture is rare but not to be missed and unicondylar Hoffa must be evaluated for Bicondylar nature of fracture. In addition to describing the precise pattern of injury, a CT scan also provides 3D images that are useful for surgical planning. For a good functional long-term result, open reduction and internal fixing become necessary. 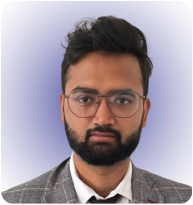 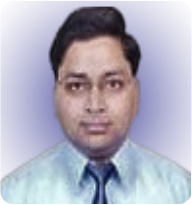 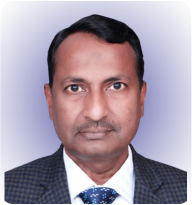 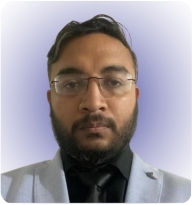 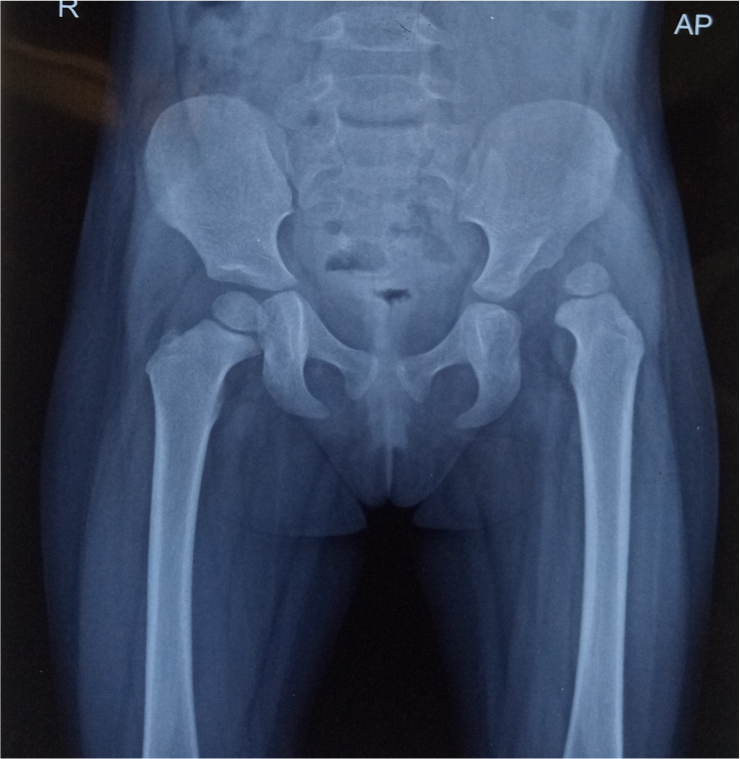 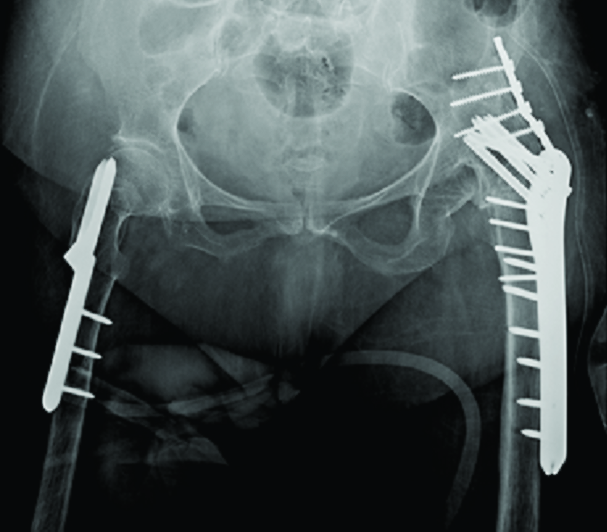 Recurrent Patellar Instabilty Culminating in a Vertically Rotated and a Locked Patellar Dislocation ... 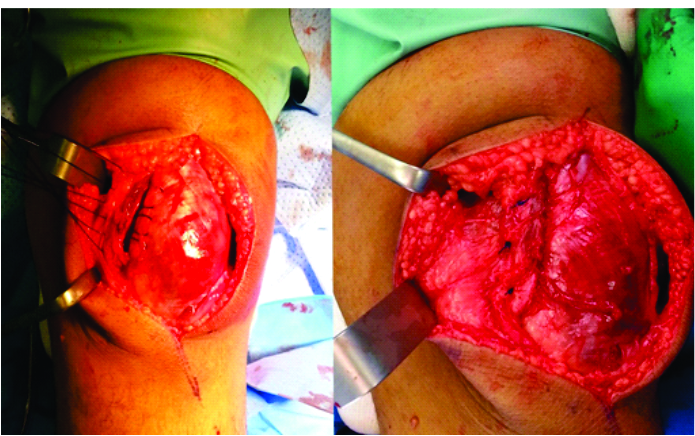