Introduction:This study presents a case of post-traumatic dorsal hand reconstruction by describing the surgical technique in several stages and the outcome.

Case report:It involves a patient with loss of cutaneous tissue, loss of bone, and tendon in the dorsal hand and fingers following a car accident. He was treated on a four-stage hand salvage and reconstruction. Stage one fulfilled in emergency involved K-wire and osseous filling through acrylic cement, hunter tendon rods, and a free anterolateral thigh flap. The second stage at 2 months involved osseous grafts and finger joint prostheses. The third stage time at 7 months involved a toe joint transfer. The last stage at 11 months involved extensor tendons graft reconstruction. The functional outcome at 2 years is acceptable.

Conclusion:The post-traumatic dorsal hand reconstruction requires several techniques to reconstruct the losses of substances observed and this in several stages. It allowed to have an acceptable hand function.

The reconstruction of lost tissues in upper limb remains a challenge for the surgeon after there has been a burning, tumoral resection, infection, and trauma [1, 2]. Tissue losses in this area are mainly attributable to trauma [1]. These reconstructions involve a plan and rigorous surgical technique [3]. This study report one case of post-traumatic dorsal hand reconstruction by describing the surgical techniques in several stages, using a free thigh flap, induced membrane technique, a toe joint transfer, several joint prostheses, and describe the outcome.

GM, a 55-year-old right hand victim of a car accident (hand dragging along the asphalt, hand in contact with door), presented substantial cutaneous, bone, and tendons losses from the dorsum of the hand and of the long fingers (Fig. 1). 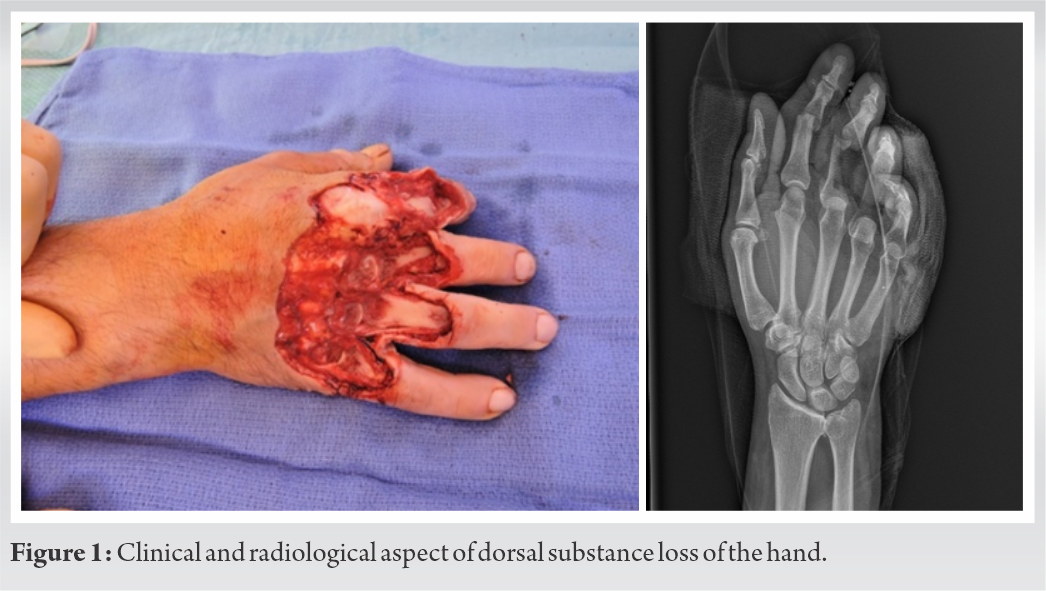 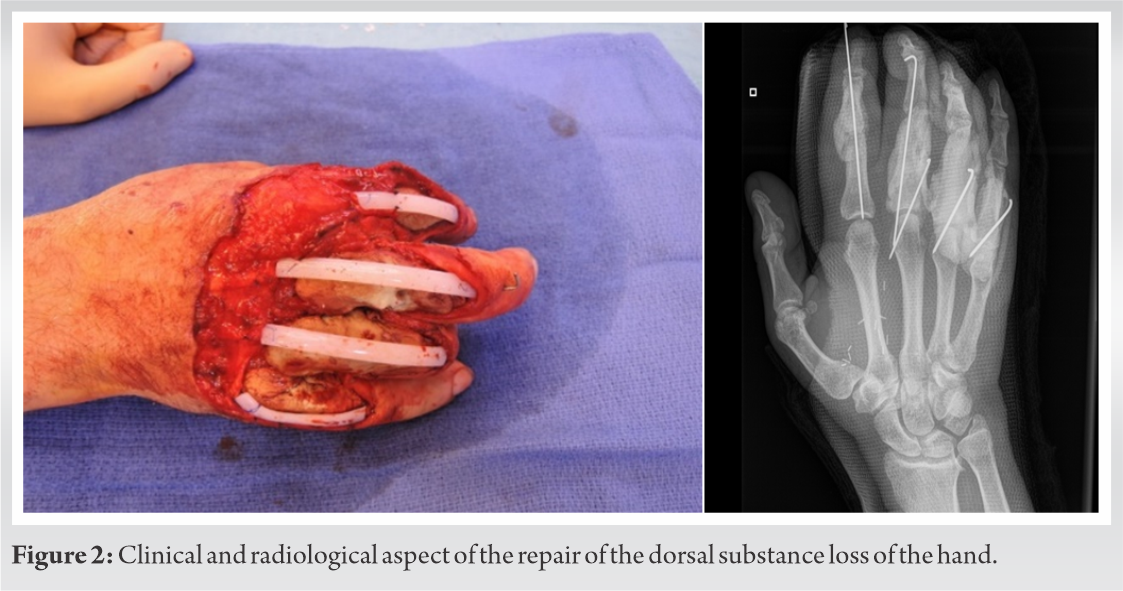 Harvesting a super thin free anterolateral thigh flap (ATF), based on a piercing artery scoped by echo Doppler and raised on fascia superficialis with terminolateral anastomosis on radial artery for the coverage of skin tissue loss of the hand dorsum (Fig. 3). 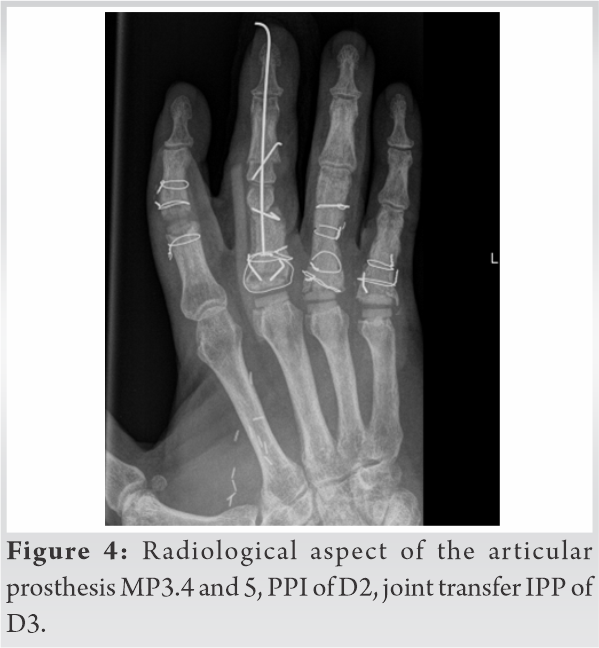 The fourth stage was fulfilled 11 months later and involved: Rebuilding the four extensors through grafts of bilateral plantaris muscle (no palmaris longus available), carrying out PIP D2 radial ligamentoplasty, non-union of the proximal part of toe joint transfer treated by bone graft and plate fixation, and ATF flap final reshaping with D2–D3 syndactyly release. The fourth phase post-operative 4 months later were marked with the strengthening of treated non-union. The patient recovered the use of the hand and began performing heavy household tasks thanks to rehabilitation. A difficulty was reported with the MP flexion in D4 and D5. A remaining PIP ulnar deviation with D2 and D3, PIP extension of D3 remains limited. The patient is nevertheless very satisfied with the result and does not wish further surgery (Fig. 5, 6).

This surgical case shows us that complex tissue loss reconstruction is an uphill task, involving a set of interventions from several surgical subspecialties, requiring microsurgery through each step with acceptable functional outcome. The option of the different steps was justified by the complexity of multi-tissue lesions. And took into account the favorable evolution of each step before continuing. And taking into account the favorable evolution of each step before proceeding with the other steps The first step in emergency is always the debridement that removes any non-viable remaining tissue this coverage wards off infections, and provides protections to underlying structures, thus facilitating further reconstruction practice [1]. We opted for a free ATF depending on the tissue loss area [2]. Bone stabilization is a part of this first stage in emergency while dealing with serious tissue loss. This stabilization is performed through K-wire and acrylic cement to fill up the defect. The use of K-wire in major osseous stabilization facilitates skin coverage over the external fixator [3]. The cement is replaced 3 months later by an autologous corticocancellous graft, after complete scarring of the flap. The crest remains the most frequently harvested site for its graft density and viability [4]. The osseous shaft defect being reconstructed by the autologous graft, the joints received silicone prostheses and toe joint transfer [5]. Both techniques were used at different times first because of the fear of infection then to compare their functional results. The joint function in fingers is more restrained in toe transfer rather than silicone or pyrocarbon arthroplasty [6]. A single joint transfer was performed because it calls for an accurate microsurgery technique, has complications and very often calls for a second practice [5]. Bilateral plantaris muscle tendon was used in view of the loss of tendinous substance. Sticks in silicone enabled the flow of tendon [3]. The readjustment is paramount sometime after hand surgery, especially after such reconstruction both in joint and tendon. The functional outcome is reassuring even if there is still some place for improvements.

The traumatic hand dorsum salvage requires several techniques of reconstruction at many different stages. It can lead to an acceptable function of the hand. 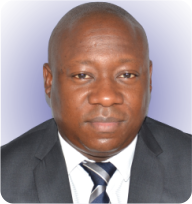 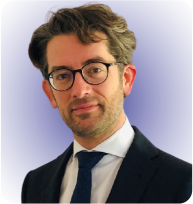 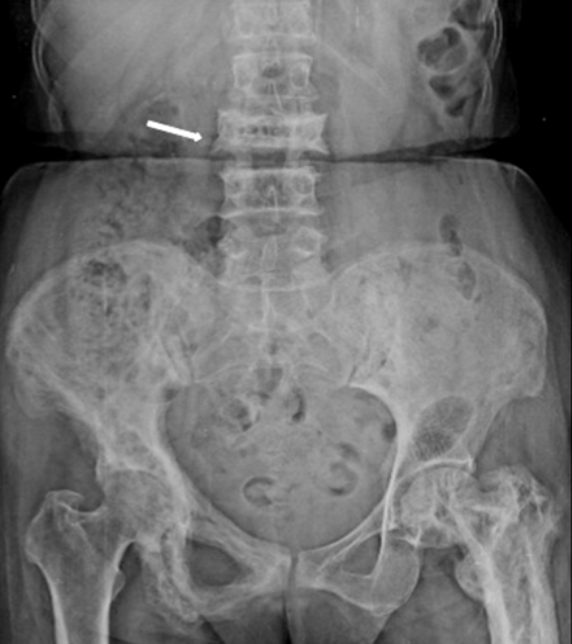 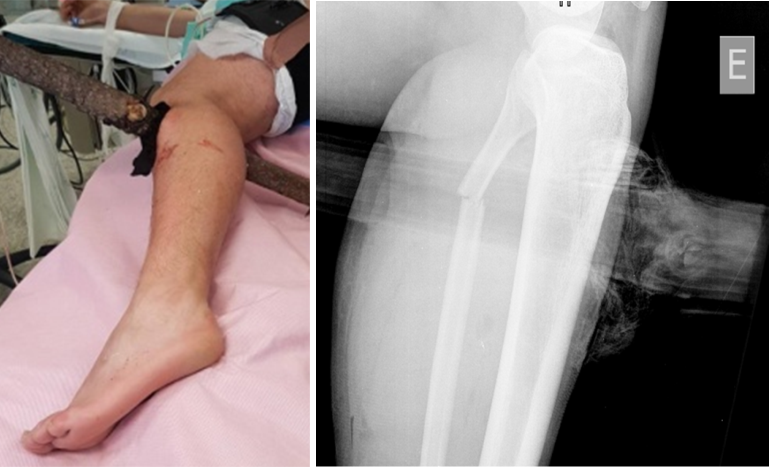 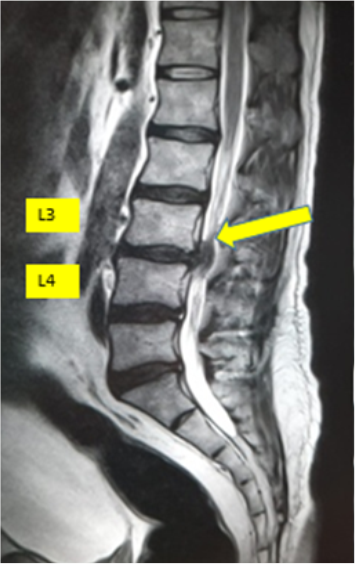